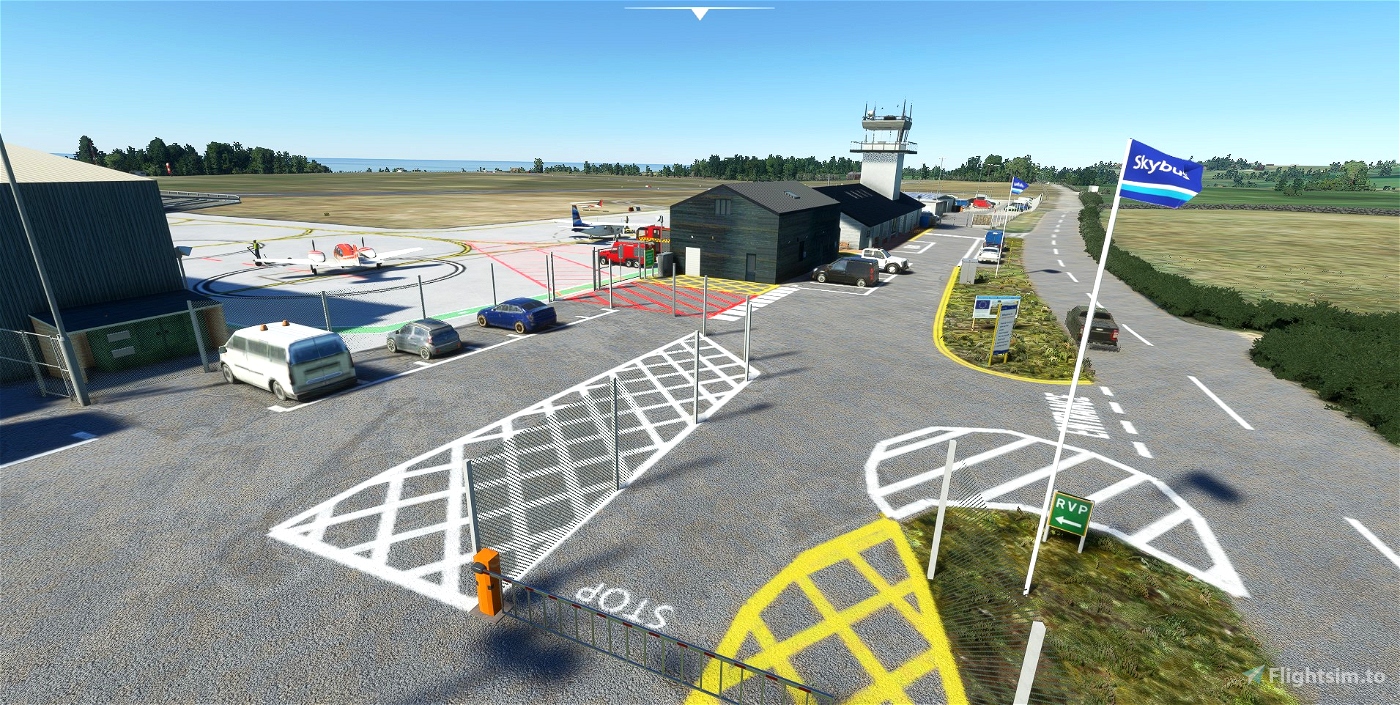 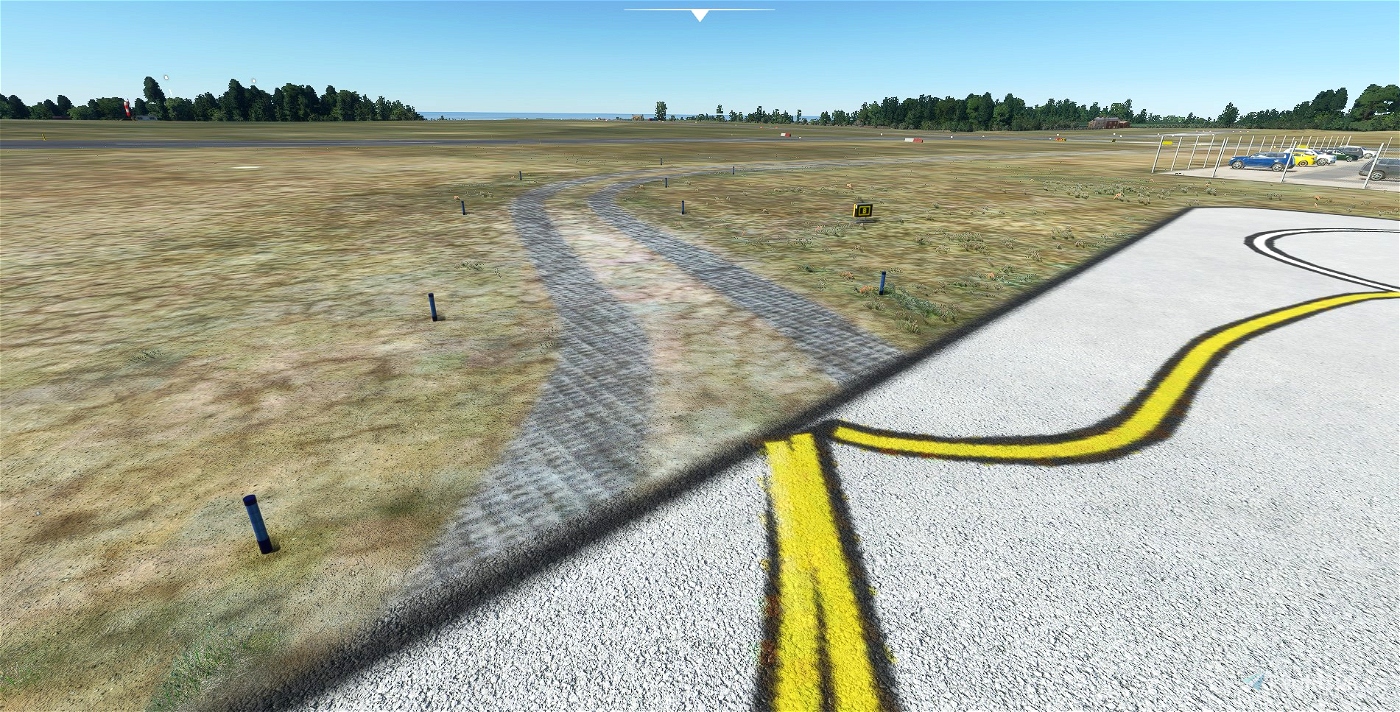 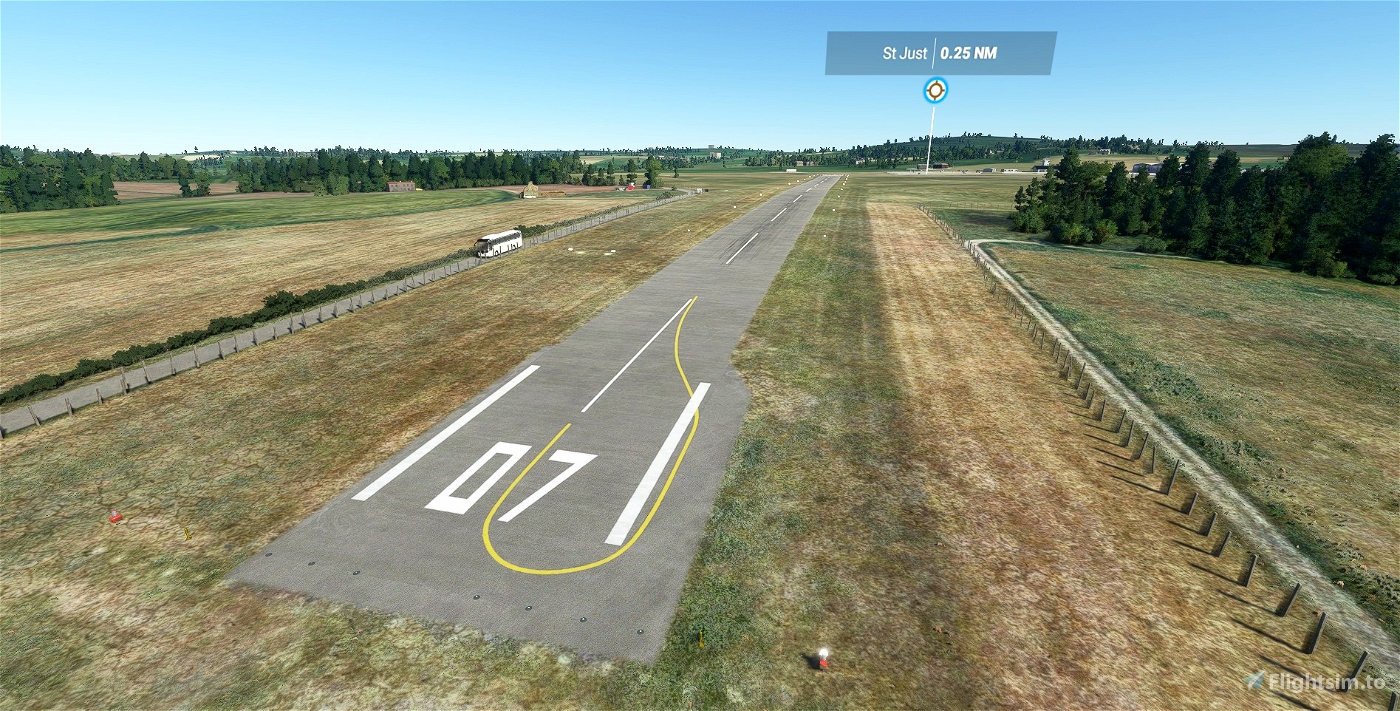 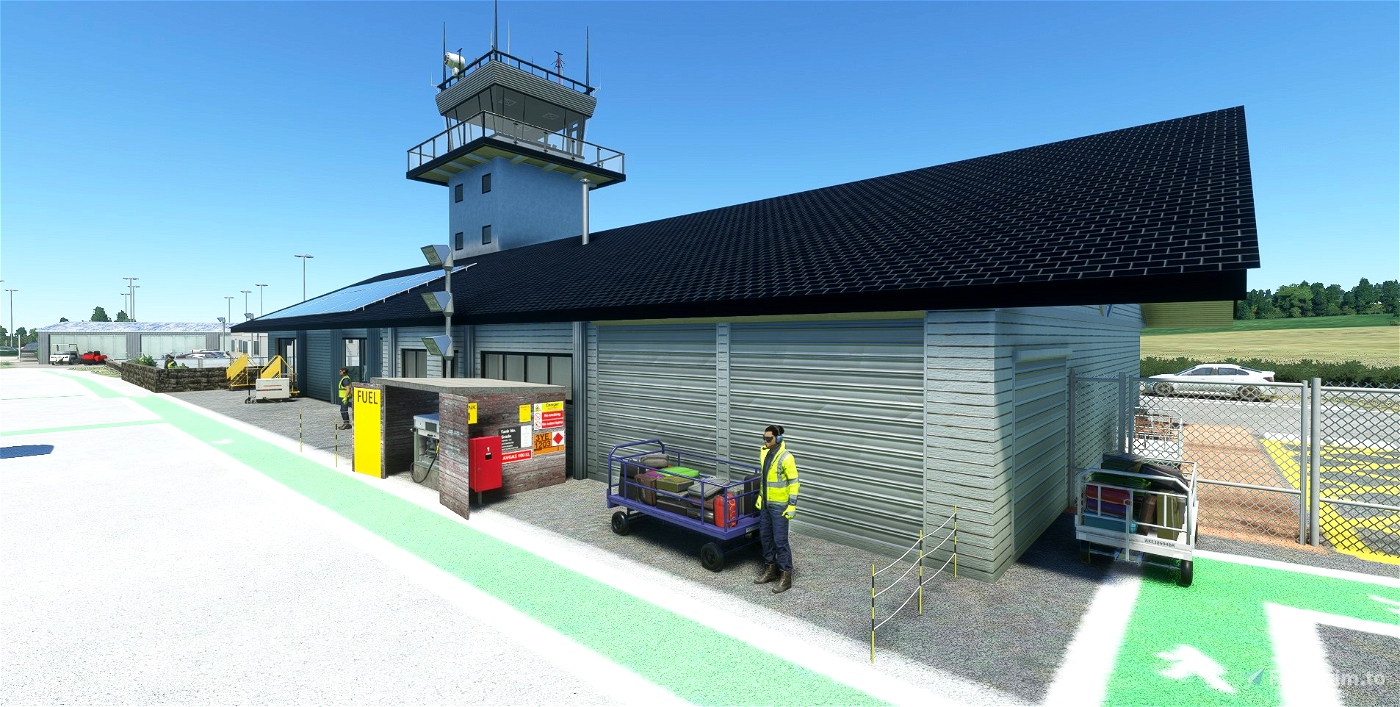 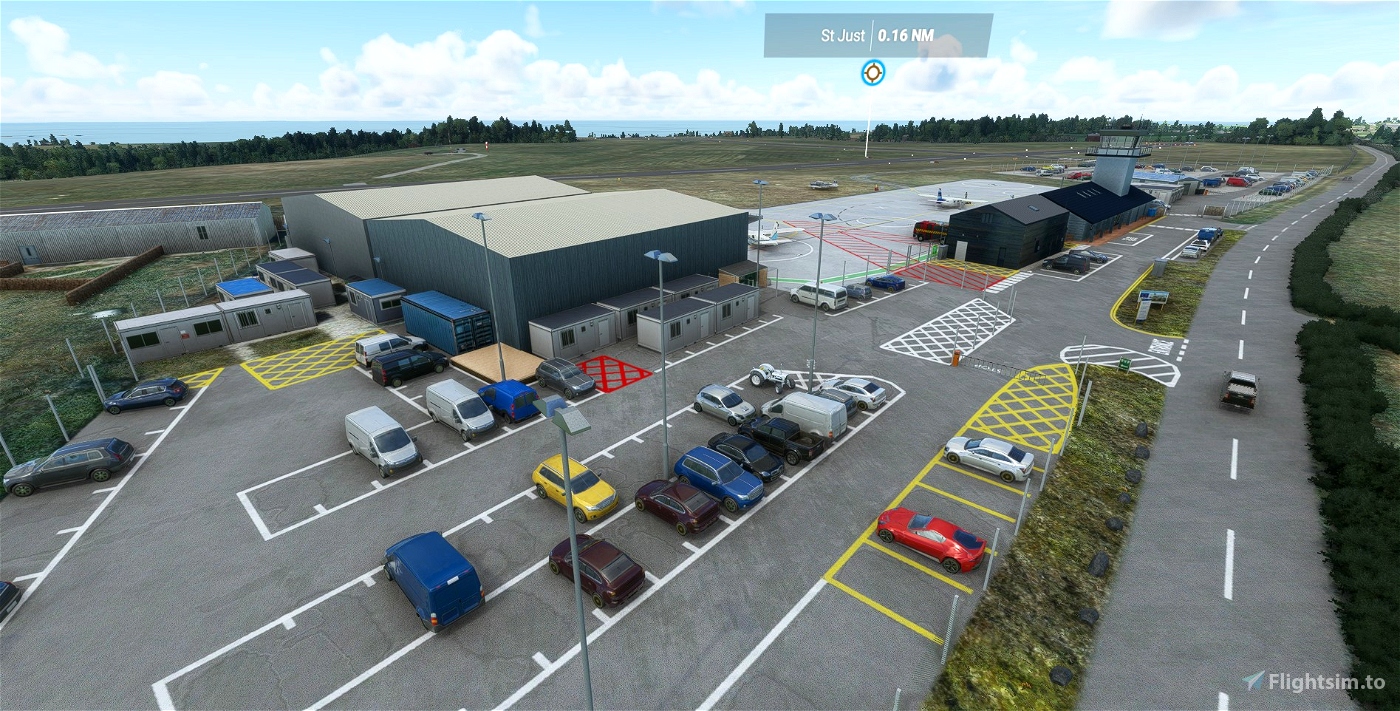 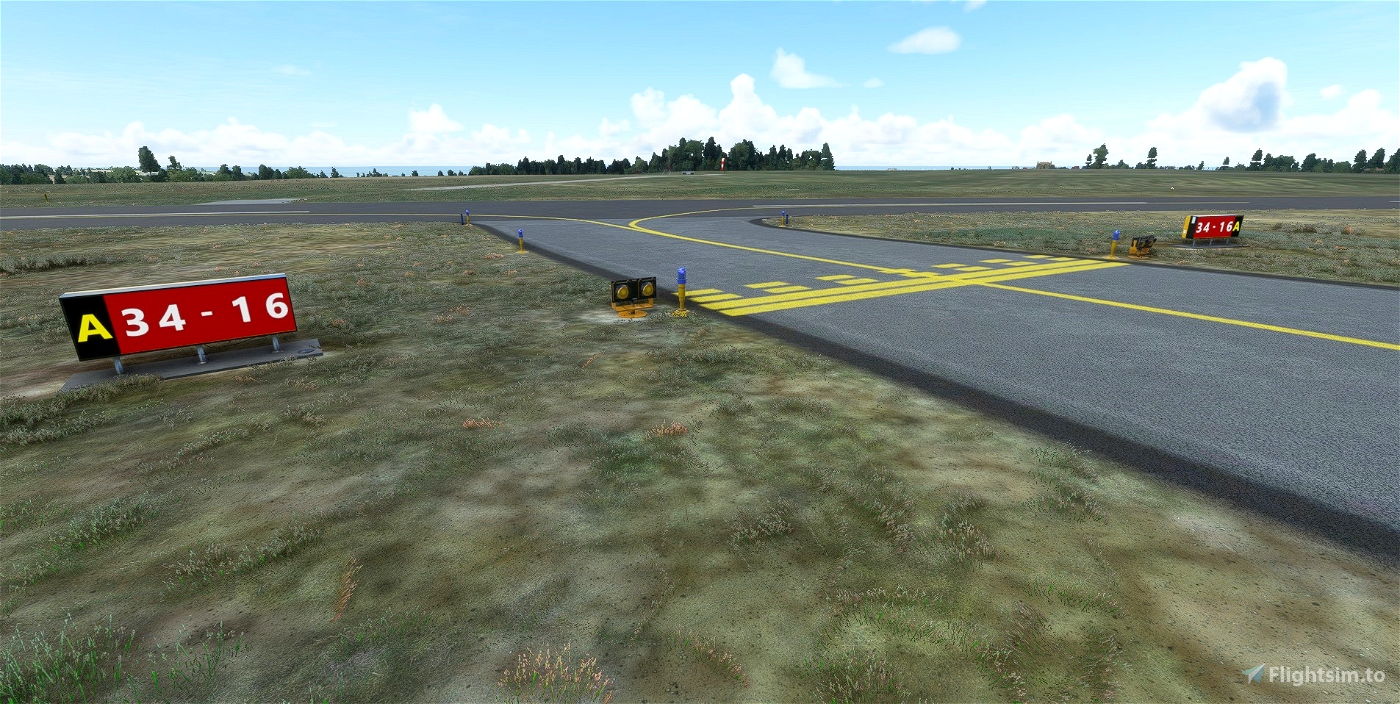 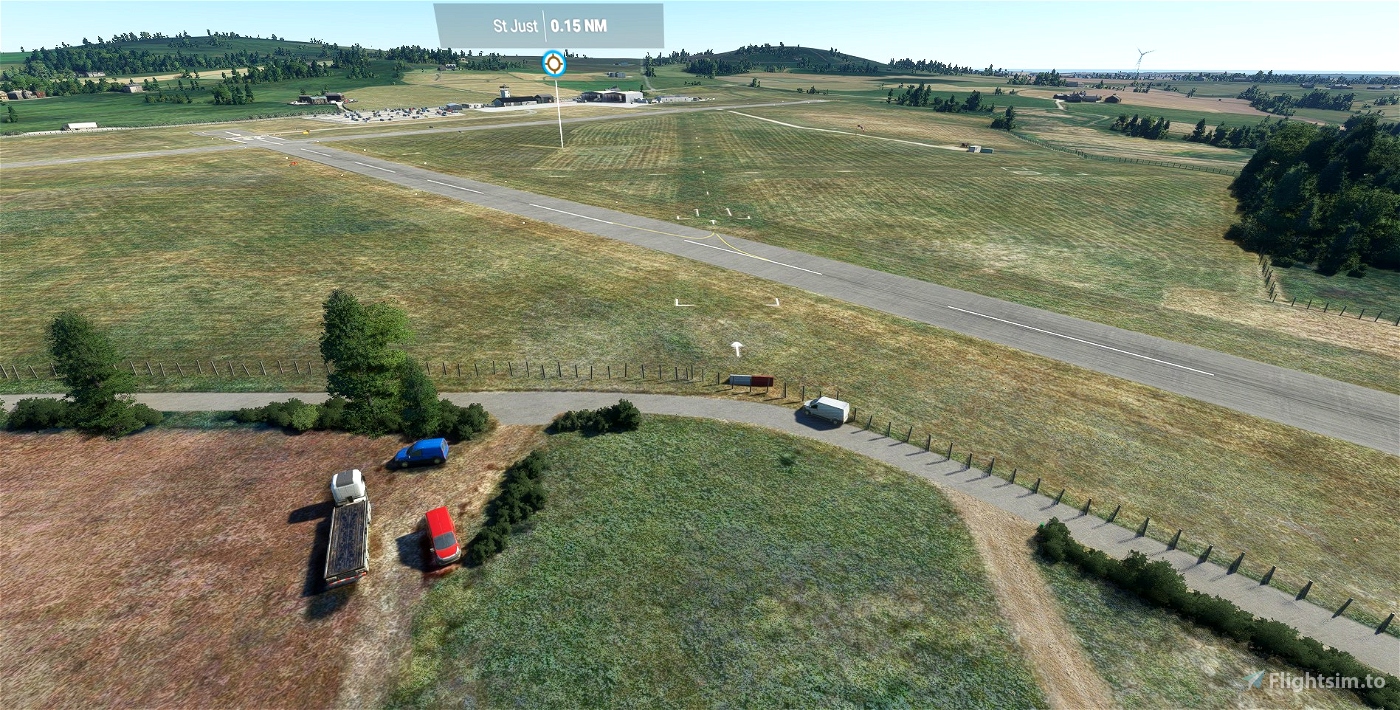 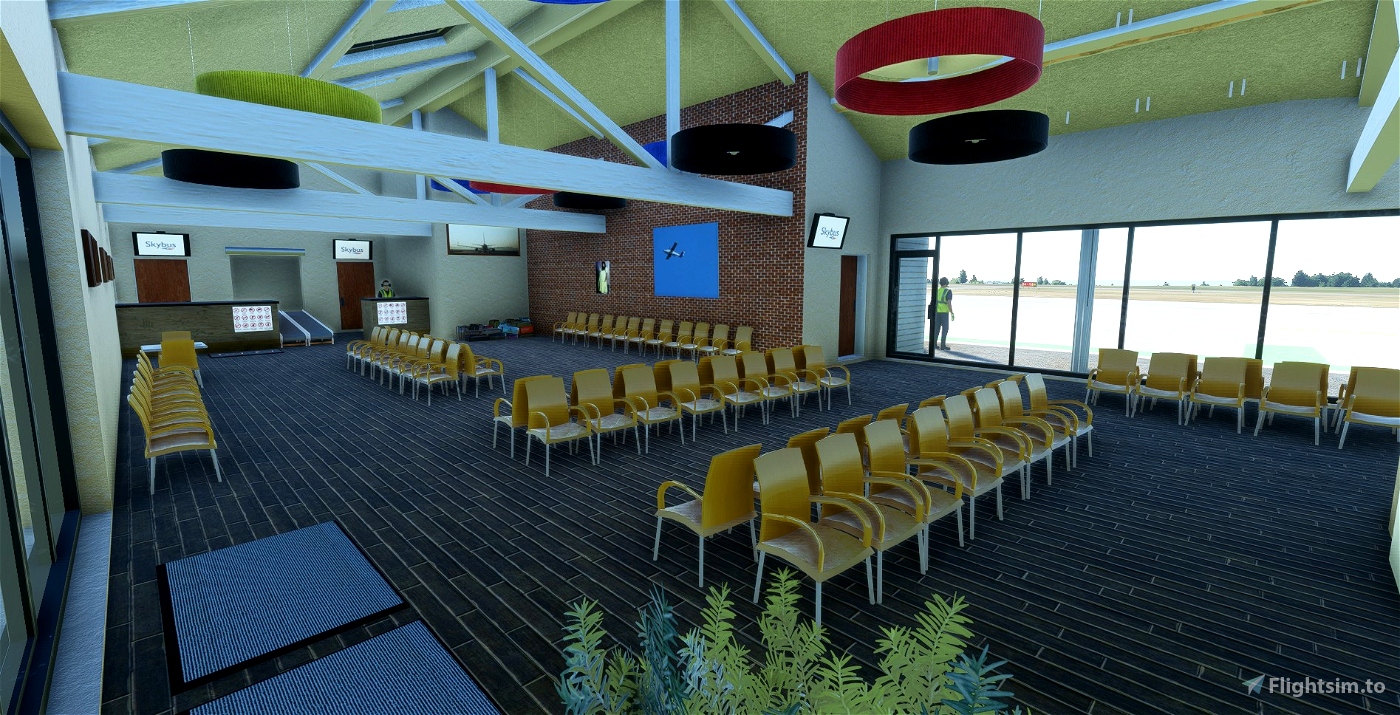 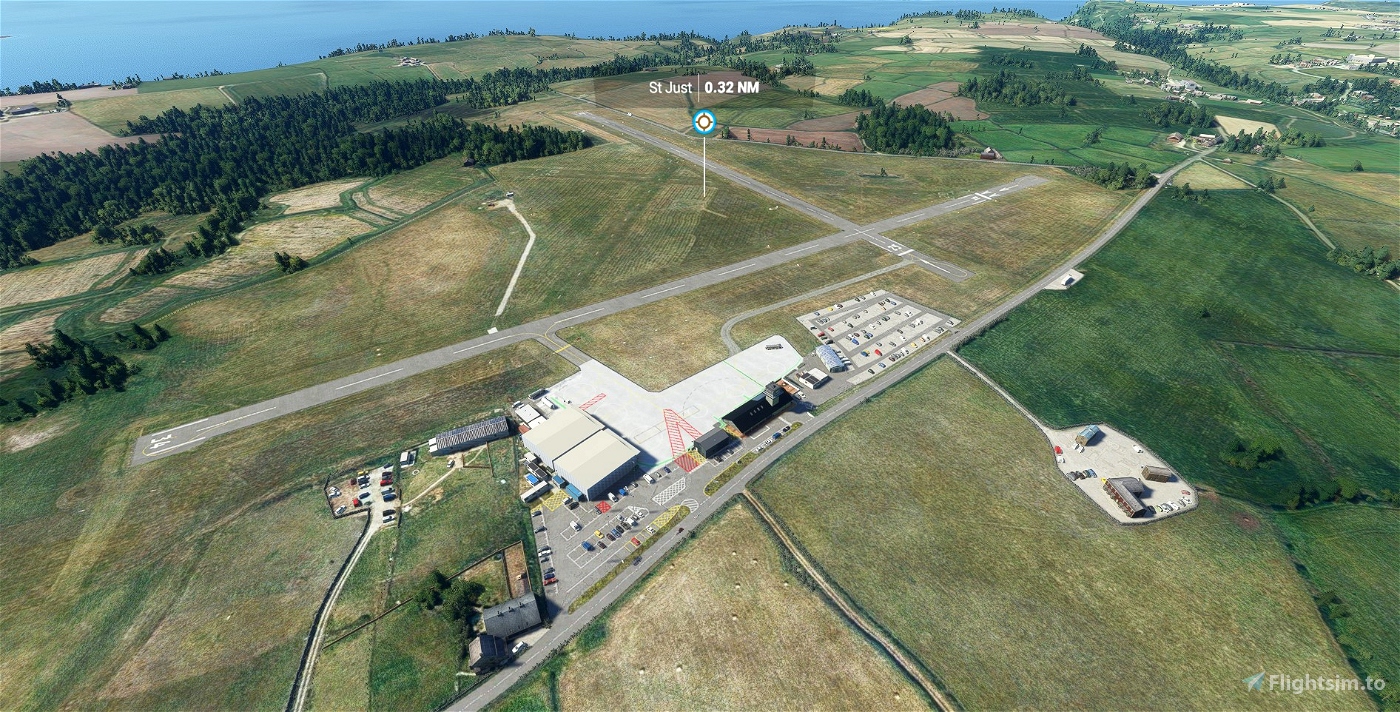 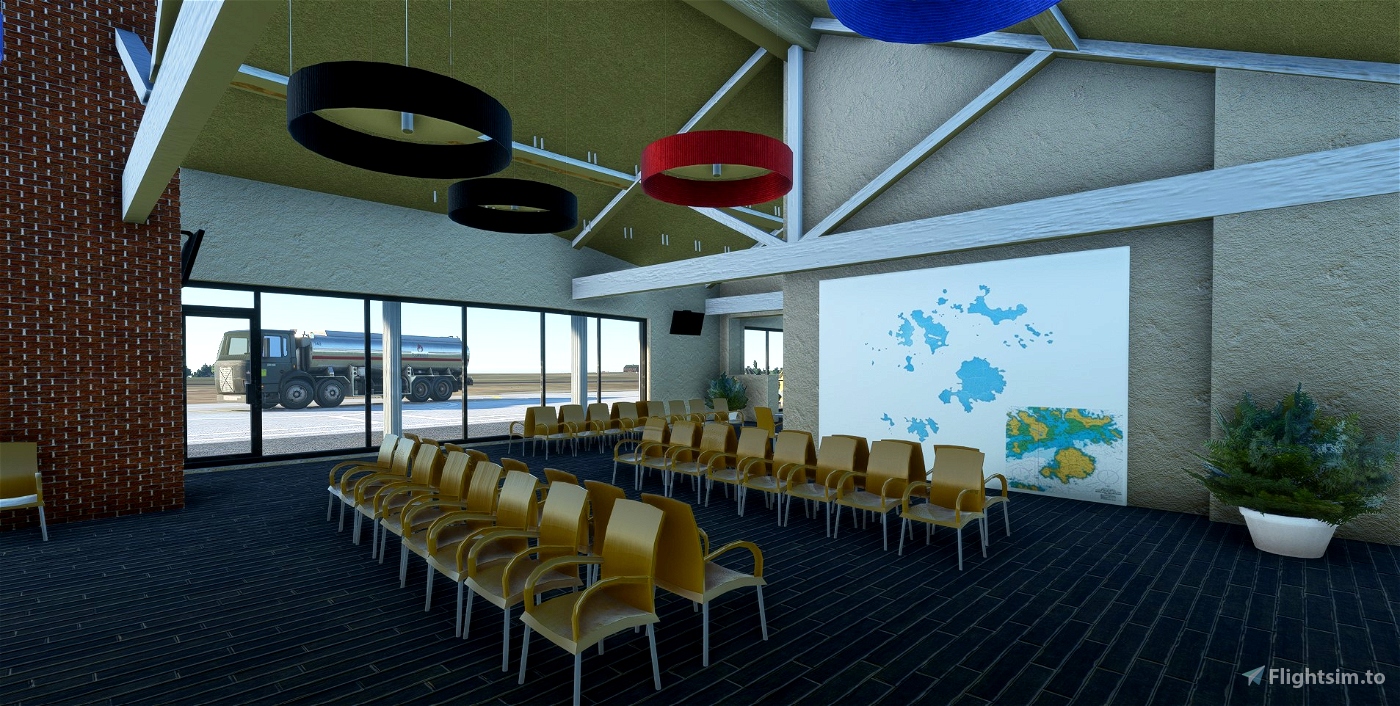 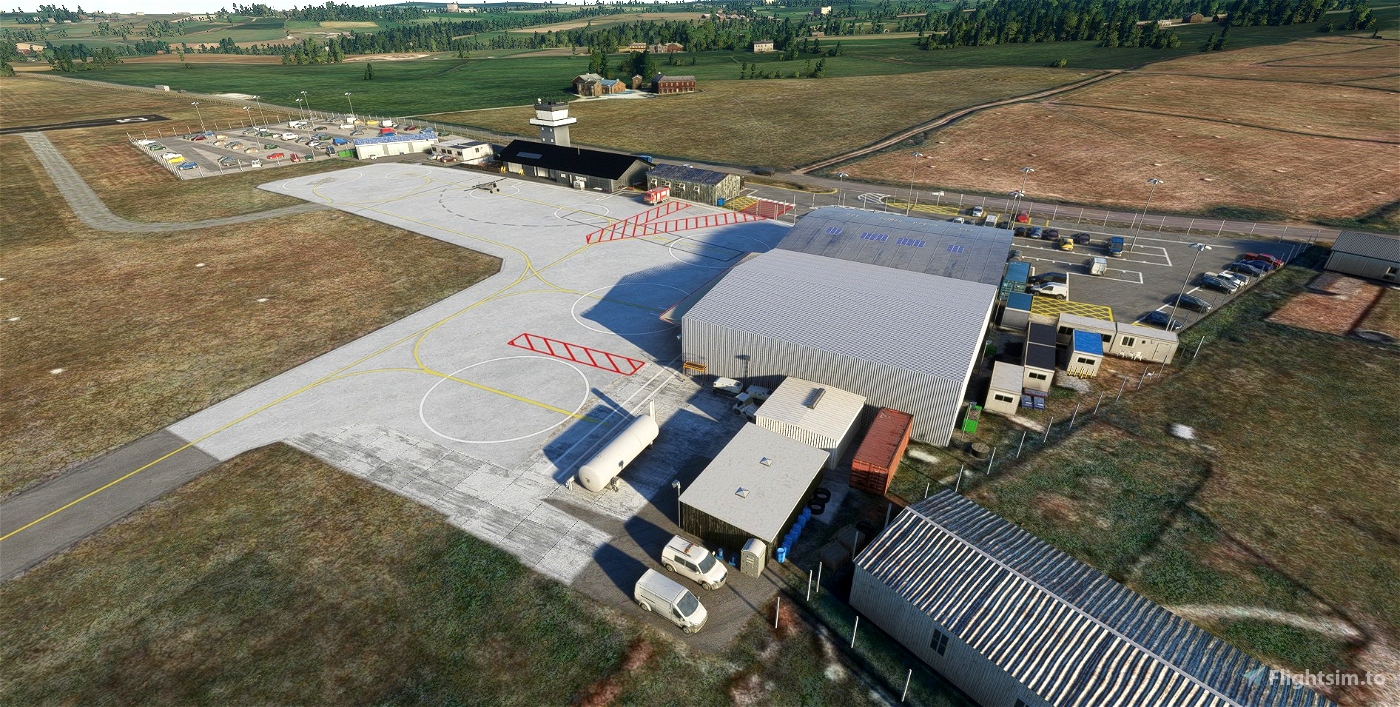 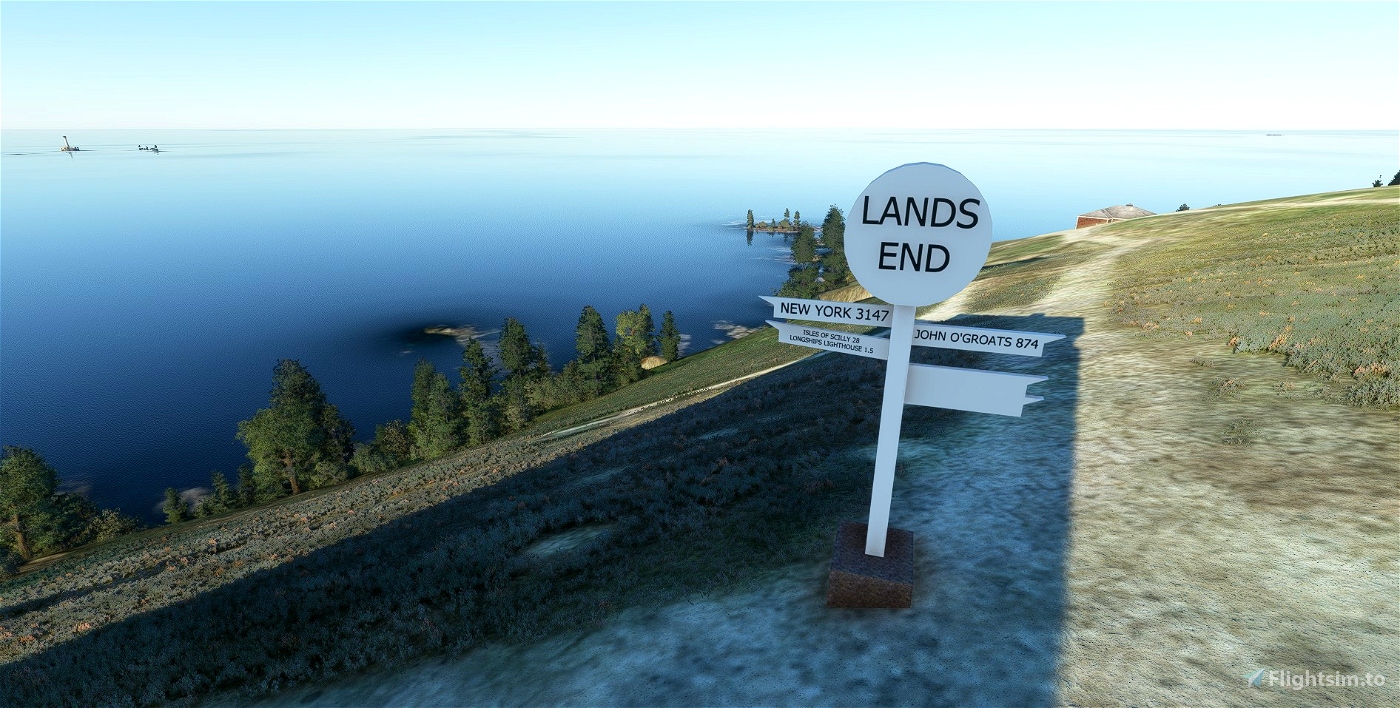 After mucho testing the only way this version is usable is to delete the Asobo one from your content manager.

This is really strange as it was possible to wipe the necessary elements of the hand done airports from previous updates, but it's not possible here. I will continue to experiment.


Land's End is my second favouritest airport before St Marys on the Isles of Scilly and rather handily that's pretty much the only place it flies to. A geezer who works there told me that almost every single person passing through is overjoyed to be there and you can't really say that of most airports.

Why should you as a discerning flyingist choose this over the Asobo version? I dunno.

New taxi system with parking space 5 starting off inside an open hangar.

A juicier terminal overall with plenty of opportunity for snacking.

More effort put into the areas around the approaches with frighteningly realistic additions such as a coach about to block the single track road it's on.

Large up to Skell300  https://flightsim.to/profile/skell300  for doing a brilliant rendition of the service building next to the terminal.

I will leave you to explore and discover the other additions for yourself, there are plenty of them. What type of maniac would download a mod without surprises?

To take this much further would basically involve my paying for your taxi fare to the real place so you can run up and down the runways with your arms outstretched before you're forcefully removed. As of right now I'm too mean for that.

There are some of Dave's 3D people in the terminal - https://flightsim.to/file/5452/dave-s-3d-people-library

Adds 1 metre DEM elevations to the site. This is mainly to add the dip to the runway 34 end but also tweaks things elsewhere. As ever with terraforming there are some weird bumps I can't get rid of, but it should be tolerable and I think it's worth the utter horror.

I've upgraded the ground markings to better match reality including getting rid of the fluorescent hatched areas.

And a few other details have  been added or tweaked.

A cheesy placeholding version of the Longships lighthouse just out to sea is included with the scenery file in here https://flightsim.to/file/3615/eghe-st-mary-s-airport-isles-of-scilly-uk-upgrade

Hi, I may have broken one of your restrictions for this scenery, but I'll let you be the judge.

I've just posted an answer to a question on Quora, and in looking for a couple of pictures to represent what I think is the best of 3rd Party Developers that we have, I've posted two (slightly "normalized" - you'll see what I mean) pictures of this scenery on line. You can find it at https://www.quora.com/How-Microsoft-flight-simulator-was-made/answer/John-Glossop-1?prompt_topic_bio=1 and if you don't like what I've done, then I'll remove your images forthwith.

This scenery has restrictions? Not sure I've never bothered to check them.

As soon as it leaves my hard drive I don't really care what anyone else does with it, but I would be unimpressed if someone else charged £500 for it, and even less impressed with anyone who paid it.

The only thing I can't do is allow the paid 3d models, and there are a few in there, to be used elsewhere. That's in their conditions of sale.

With the V2.1, I cannot use the MarketPlace or the Content Manager... I am very disapointed to not use this beautifull scene !

Do you have the same problem with the old version? This airport has always caused problems for a few people. I've never discovered why.

No, the old version was correct for me... but I lost it ... Thank you for the rest (Scilly Islands are wonderfull !

The old version is still available as a separate download from this page. Press the download button and the choice will appear.

Thank you very much. I downloaded old version.

I just loaded v.2.1 without deleting the Asobo version from Content Manager and the hanger doors are open.

Agreed. I'd prefer it if the modelling skills were mine, but they're not.

I am now dead confused about the original airport deletion. It seems to be happening for some, but not for others. It's still a waste of 360mb to keep one or t'other so I might as well leave the advisory up.

Do I still need to delete the Asobo airport? And if so, how do you remove them? What do you search for in content manager I don't see "EGHC" thanks!

Some people report doubled up buildings from both versions, but I just tested it and the Asobo one seems to be completely overridden now so I'm not sure.

You'll know if you do get doubling if the hangar doors are closed.

If that's the case https://imgur.com/a/Nm15sso to remove it click on that rectangle on the far right which should make the UK update searchable.

Clear the search box of the UK update line and then you should be able to type and find EGHC.

awesome thanks i didn't know that trick

Absolutely brilliant!!! Thank you so much for this.

Both the twotter hangar doors are closed for me. How do they open?

EDIT: Oops. Just realised the hangar doors were open but I was seeing the closed Asobo hangar doors as well cos I had re-installed MSFS and forgot to deactivate the Asobo version again (DOH!!!) Sorted and all good now 😊

That sounds like you still have the Asobo version installed. You'll need to delete it in your content manager.

I'm so jealous. I wish I had your modeling skills... sigh

Me too. Because I still don't really have any.

I can manage the occasional shack all by myself.

9 month(s) ago
Have installed this without getting rid of the Asobo version and everything works as it should. Have had a pasty from the huge selection in the café – not as tasty as my grandmother from Helston used to make but hey, it was digital… and super, as in spud…
0
0
Reply

9 month(s) ago
Just perfect. Let's face it Asobo version missed out major airport items such as the pasties in the departure lounge cafe and TVs showing the Scillonian 3 ferry crossing over to the island. At least someones taking airport development seriously. Asboso you should be ashamed of your attempted murder of this mod. Now where did I put my scrumpy for the filght.
0
0
Reply

9 month(s) ago
matey, your work is soooo appreciated !
0
0
Reply

9 month(s) ago
Where is the Asobo airports to be found if I should like to delete any of them?
0
0
Reply

Look for 'content manager'. Can't remember which screen it's on but it's not the marketplace one.

9 month(s) ago
Do we still need to delete the asobo version of this airport?
0
0
Reply

Nothing's changed there. Their version refuses to yield to me.

9 month(s) ago
I just completed the flight I attempted last night from your St Marys to St Just. Completed Satis in a default C208 with default livery.
FYI, I also have your Tresco and Scilly scenery and both Dave and Mike's object libraries. No CTD. I almost forgot. Thank you for fixing it.
0
0
Reply

9 month(s) ago
Thanks for perservering with this.
It was quite easy to remove the Asobo version and tuck it away (just in case).
Always love your airports and the attention to detail.

11 month(s) ago
Great work, Certainly alot better in many ways, AS you say the UK update also is very good.
It would be a waste not to have either.

Every considered using the review youtube video to to base a new version?
start again mixing both yours and the uk update?

Maybe doing that will remove the need to not have the uk update installed.

Can't be done. Before the UK update I played with Friday Harbour to see if you could wipe and build on top of a hand made airport. With that, you could.

With this I couldn't. None of the buildings or items will go and it won't respond to terraforming. I've never seen anywhere do that before. Their ground markings in particular are vastly better but I can't use any of it. It's fully one or the other with no mixing possible.

11 month(s) ago
Do you still need to delete the Asobo version for this to work.
Your attention to detail was quite breathtaking..
0
0
Reply

I can't find a way past it yet so yes. And with this version you save up to 25mb in space vs the other. That's one hell of a deal.

a whole 25 meg or almost? I mean it has to be worth the effort 😀

Does it make a difference that it's a Microsoft airport, not Asobo.

11 month(s) ago
If you could find some time to use your Talent to bring
EGAV Wiltshire Microlite Centre to our beloved sim it would be much appreciated. Regards from Thom.

11 month(s) ago
That's quite a Well Deserved Compliment when your rendition is considered to be as good as, if not more authentic than ASOBO's version.
Thanks for your hard work Maestro !
0
0
Reply