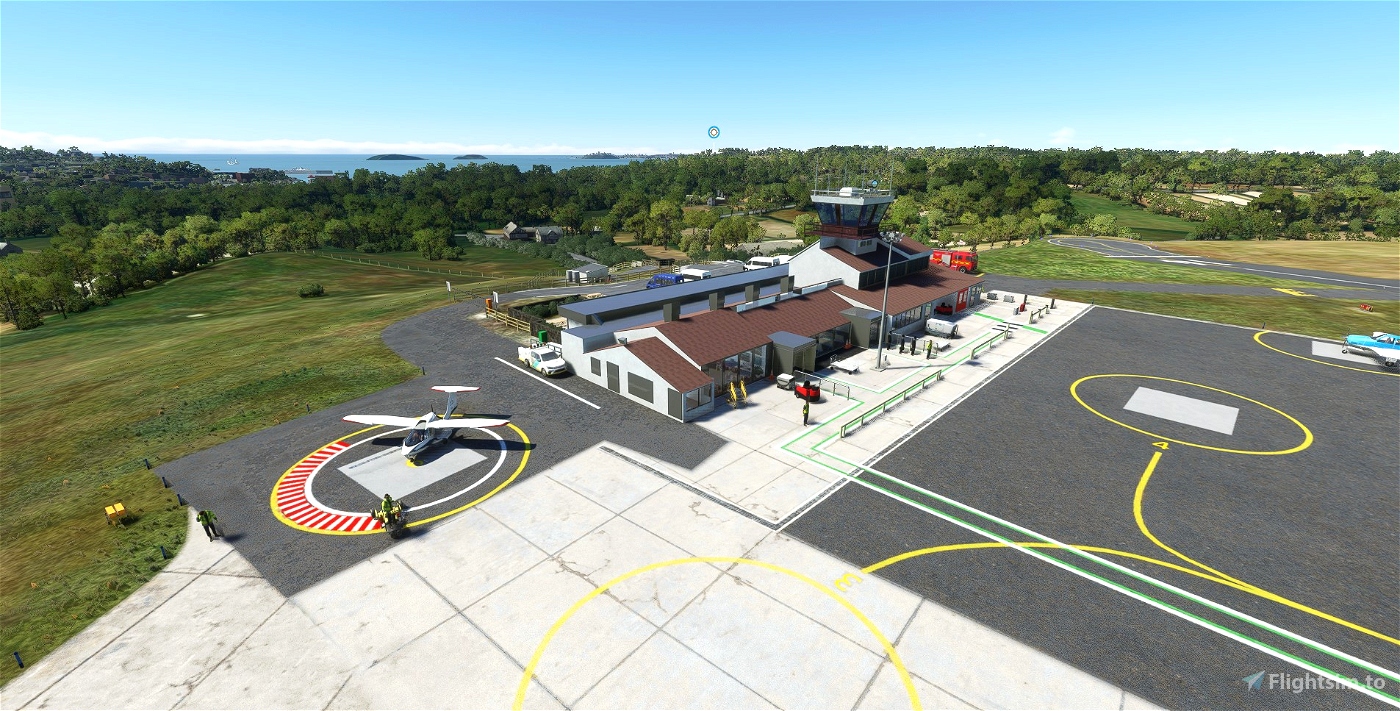 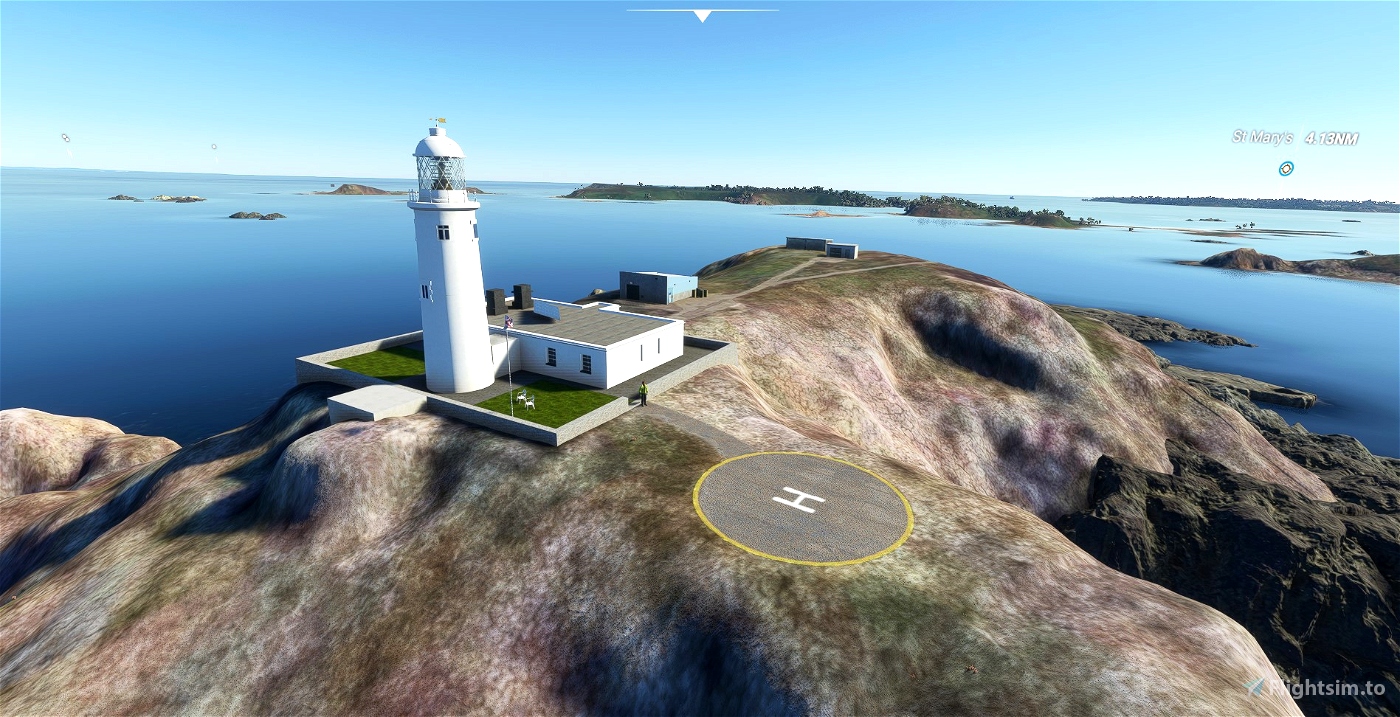 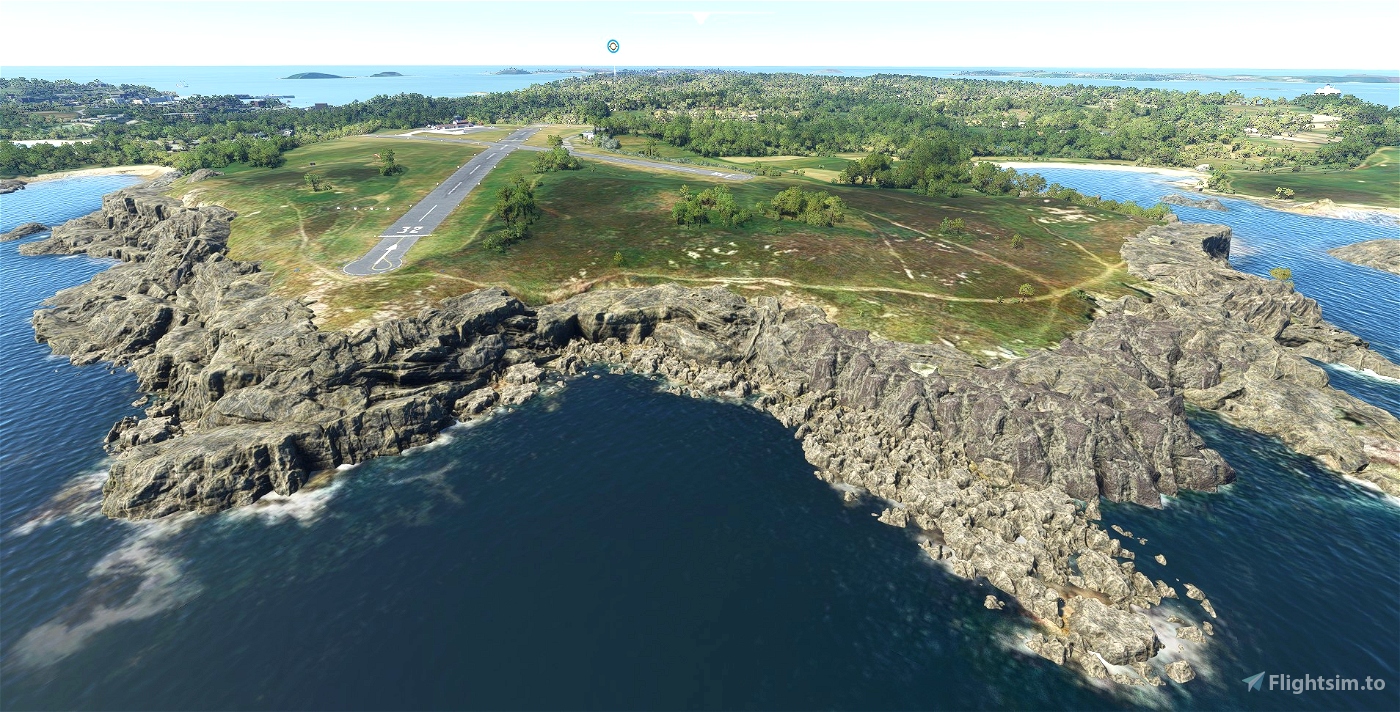 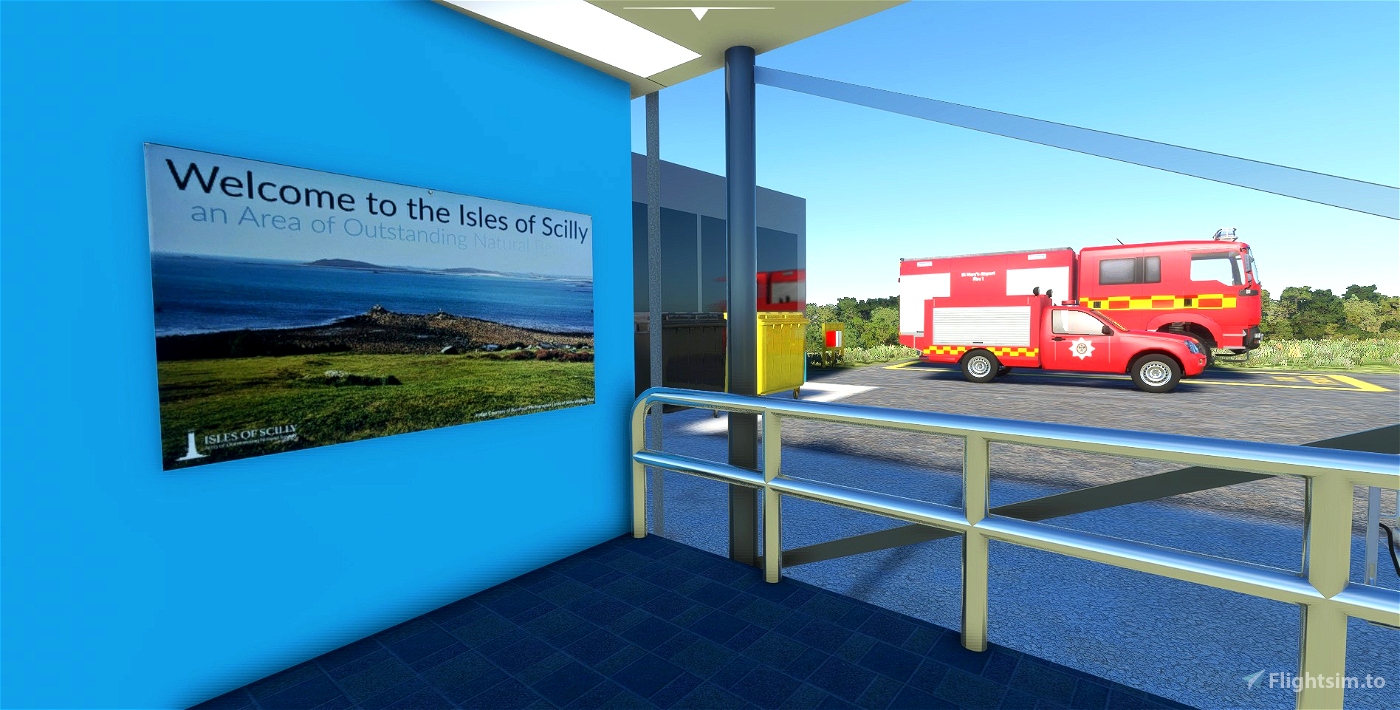 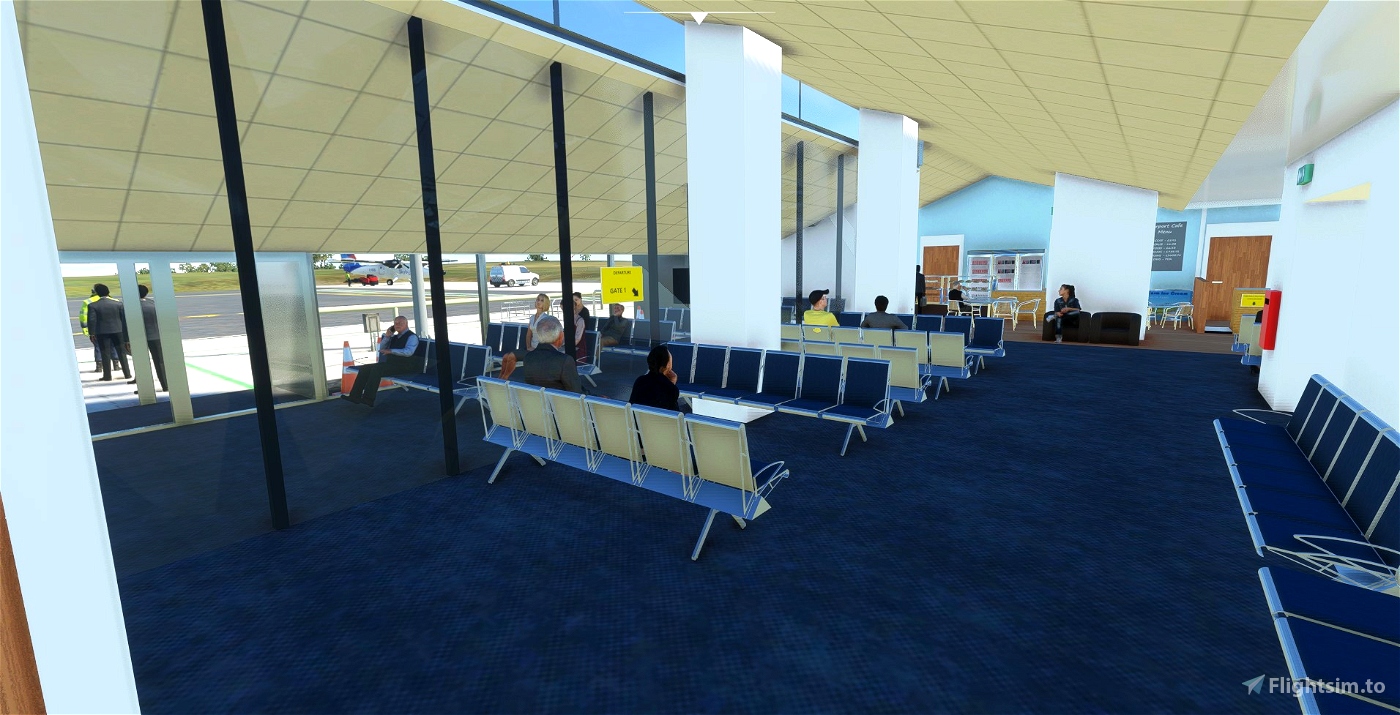 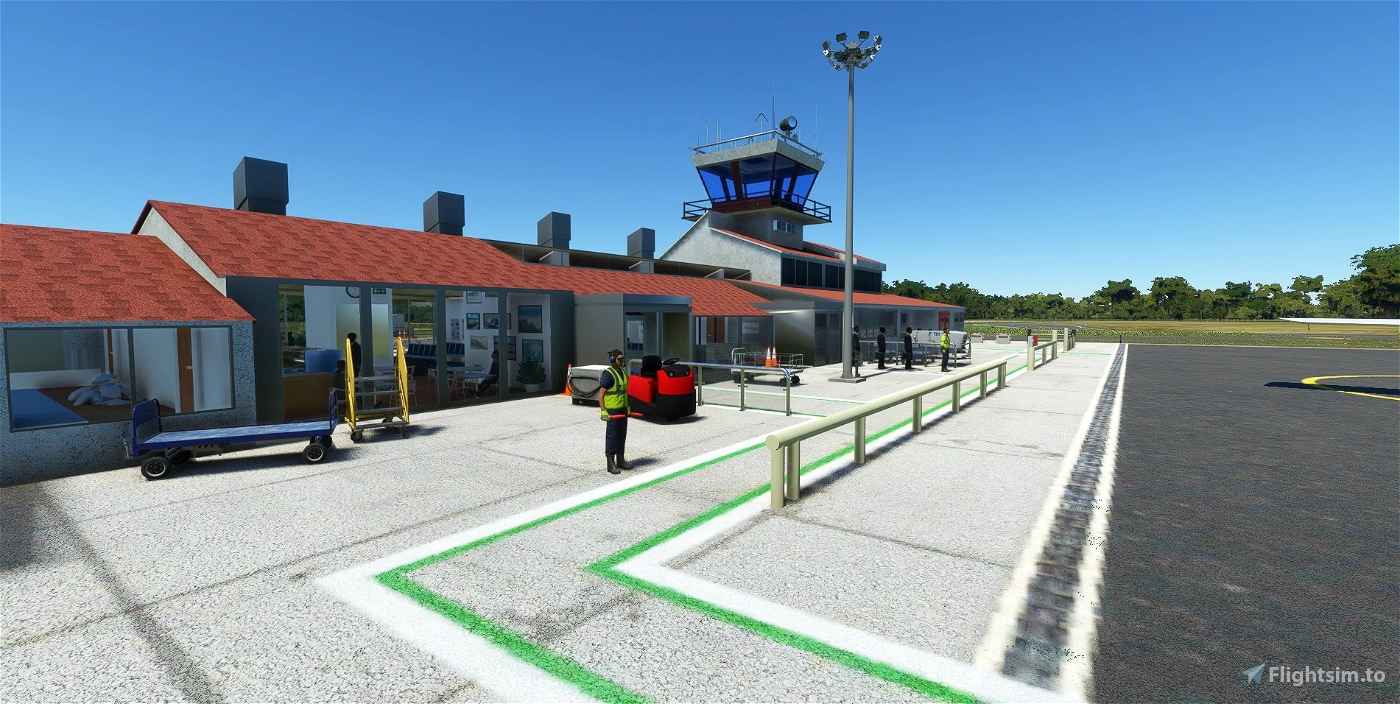 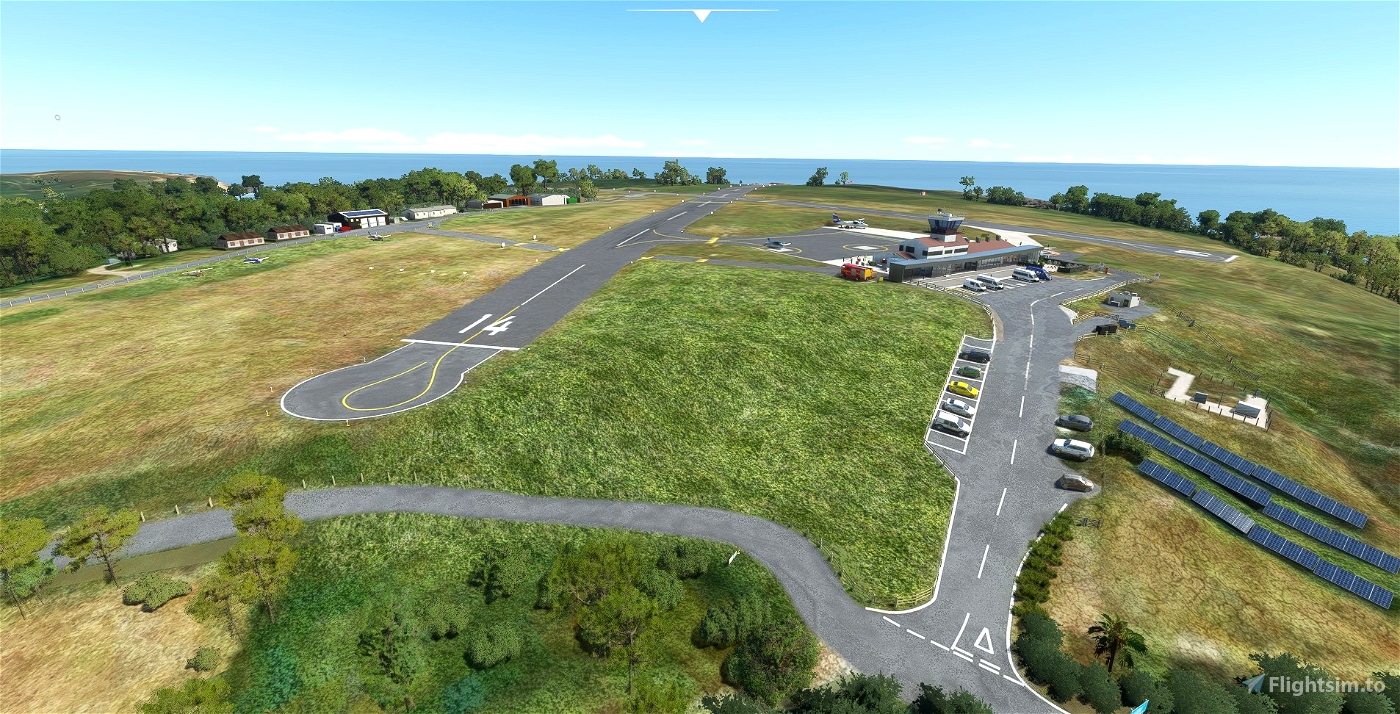 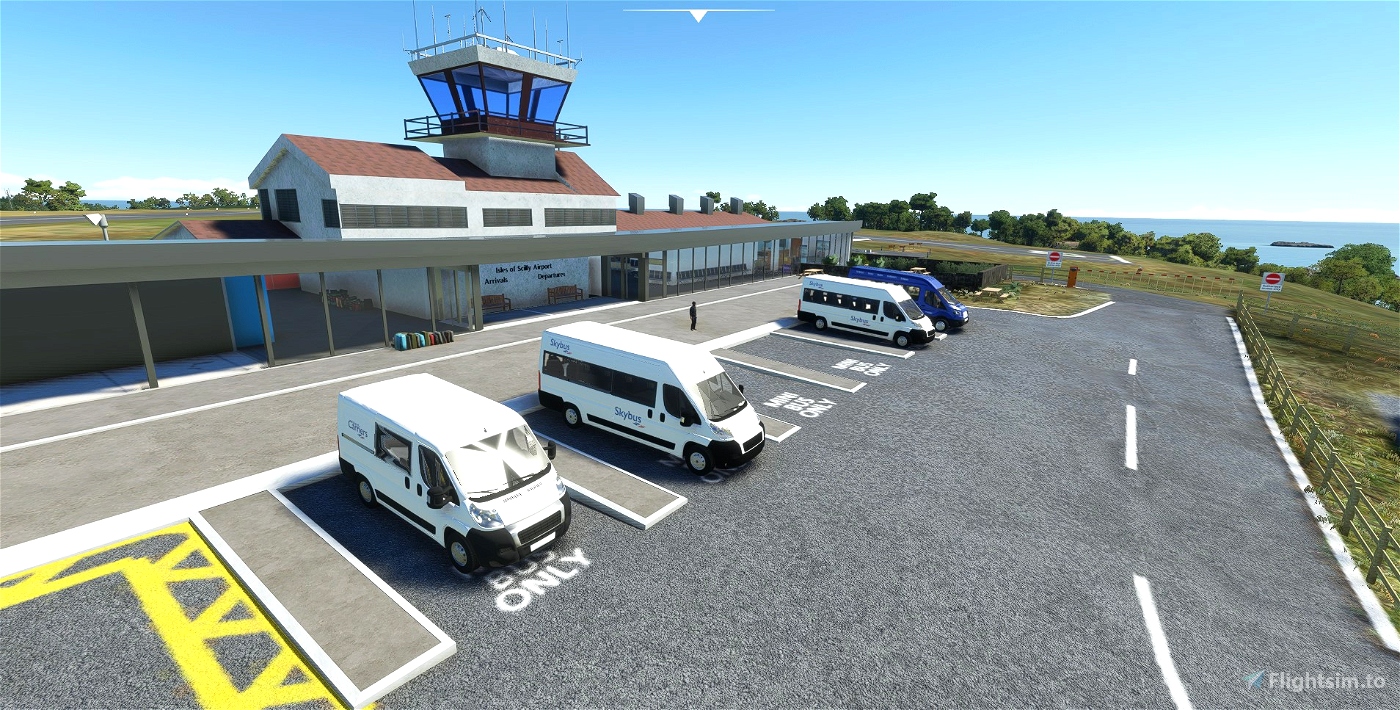 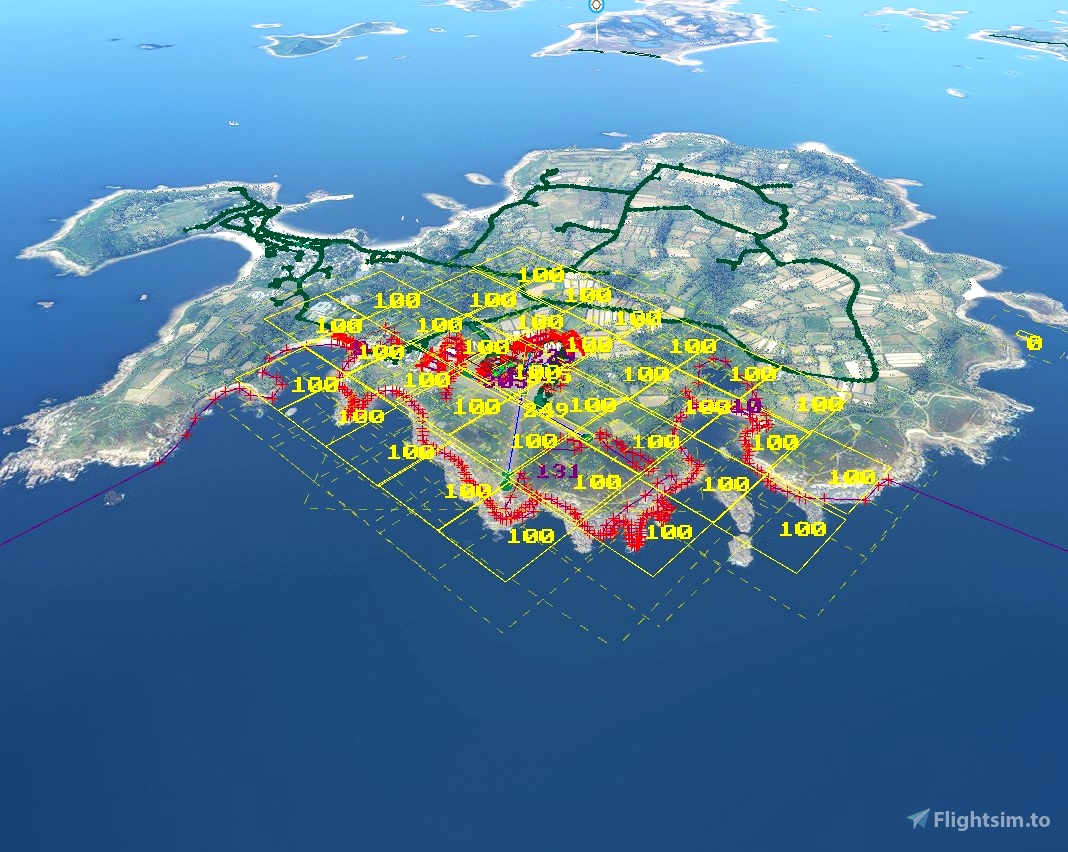 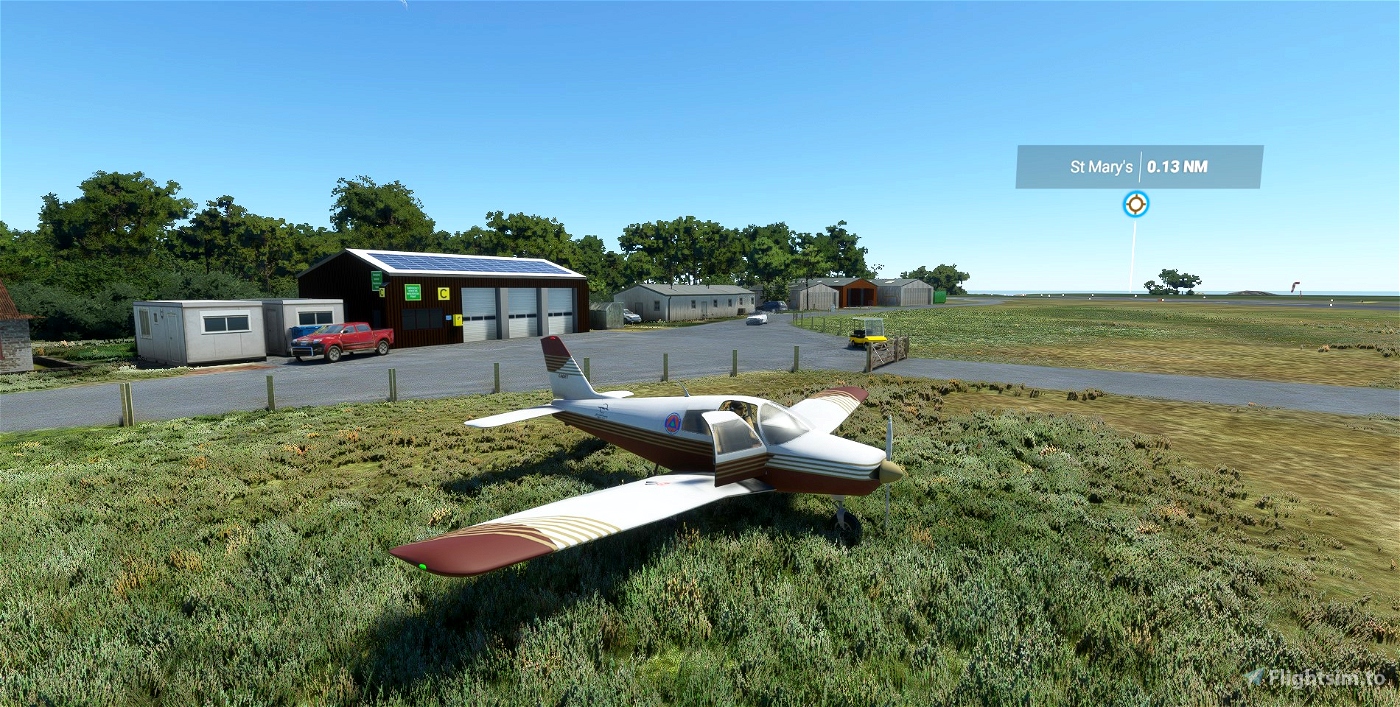 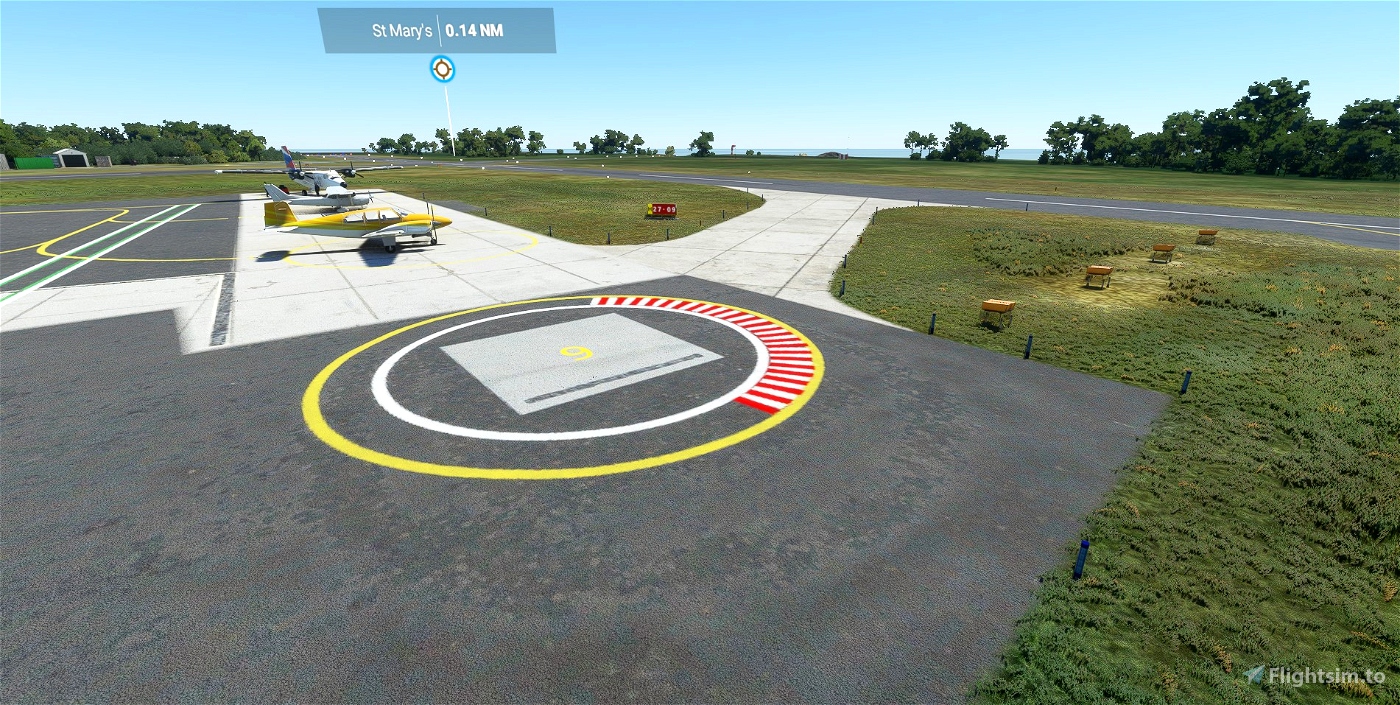 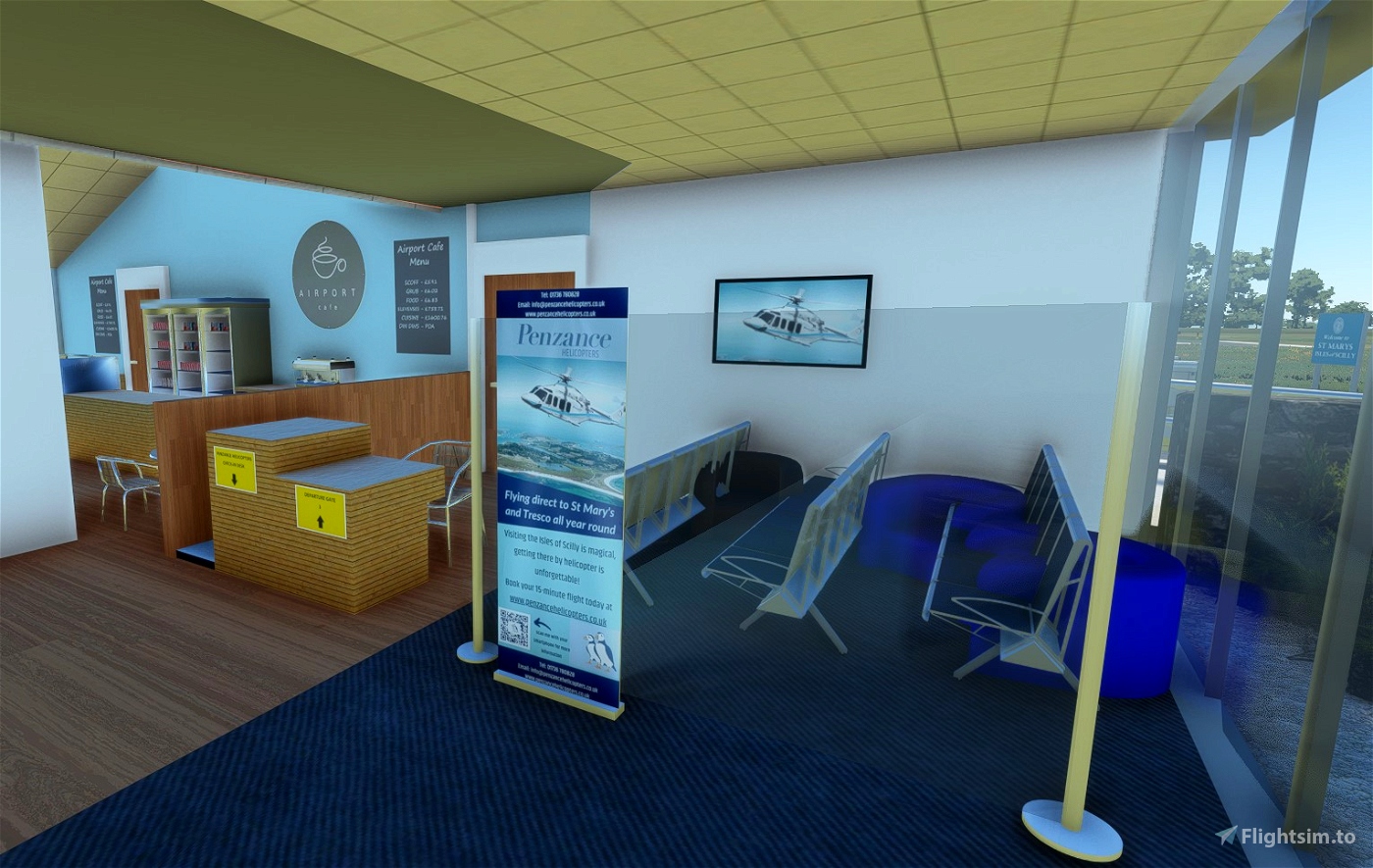 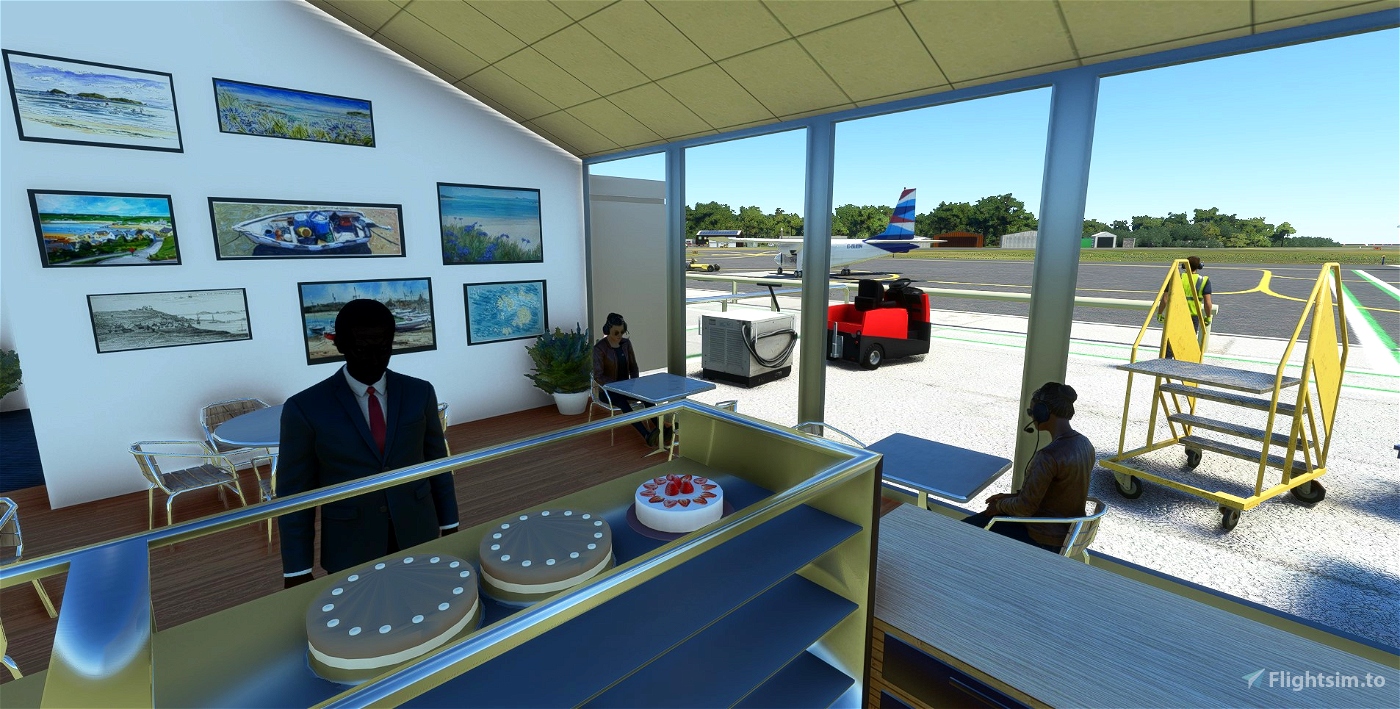 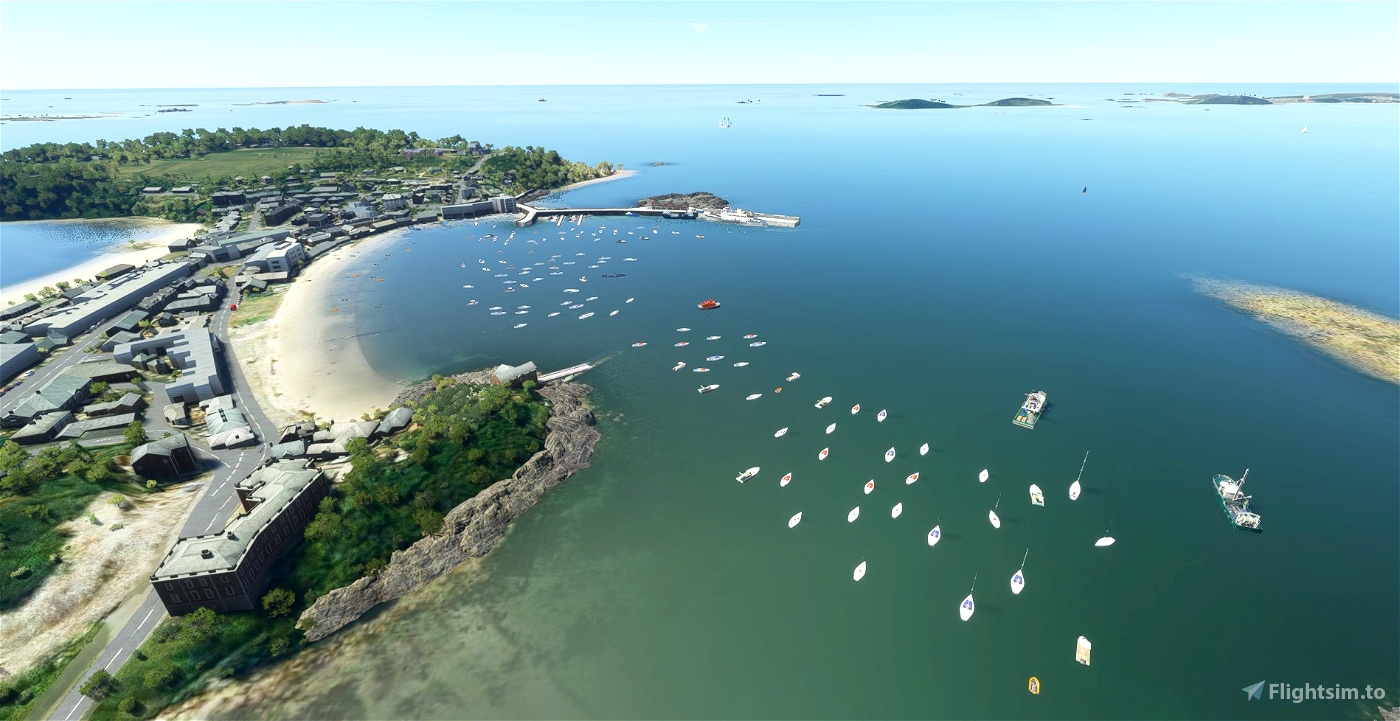 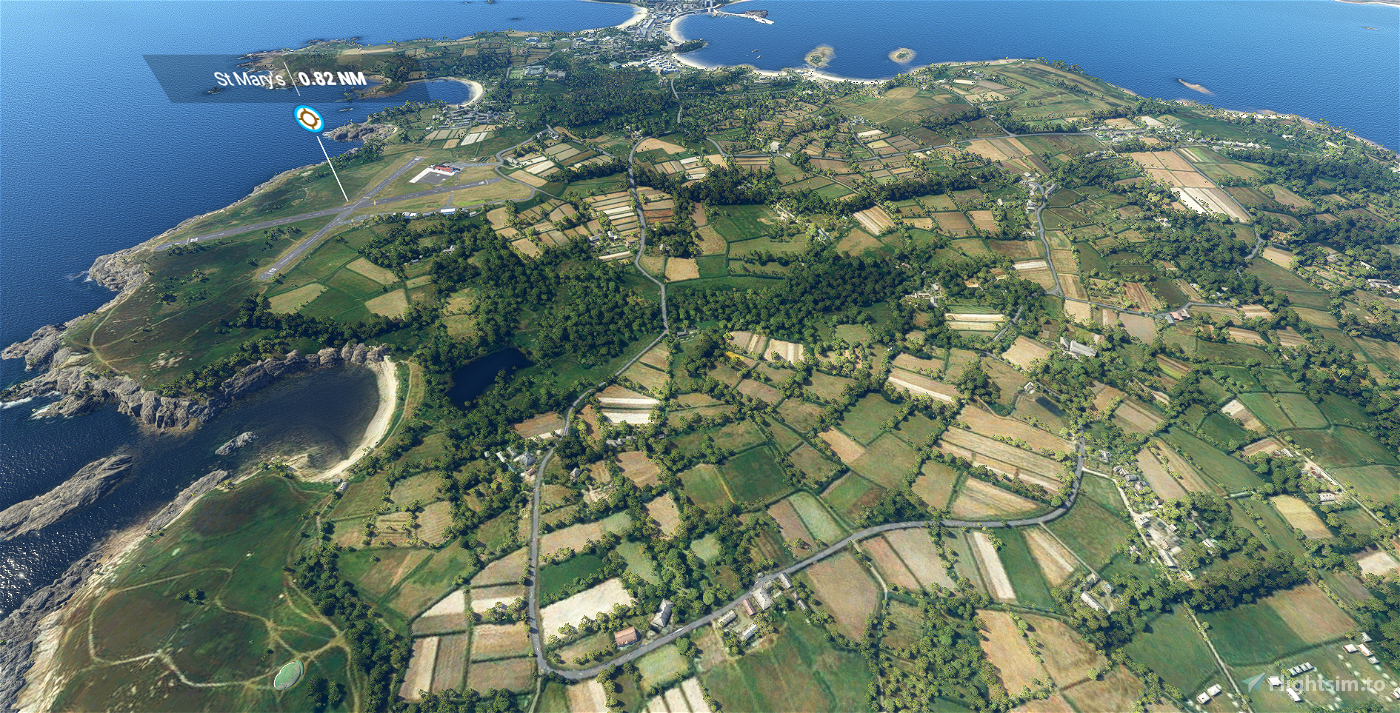 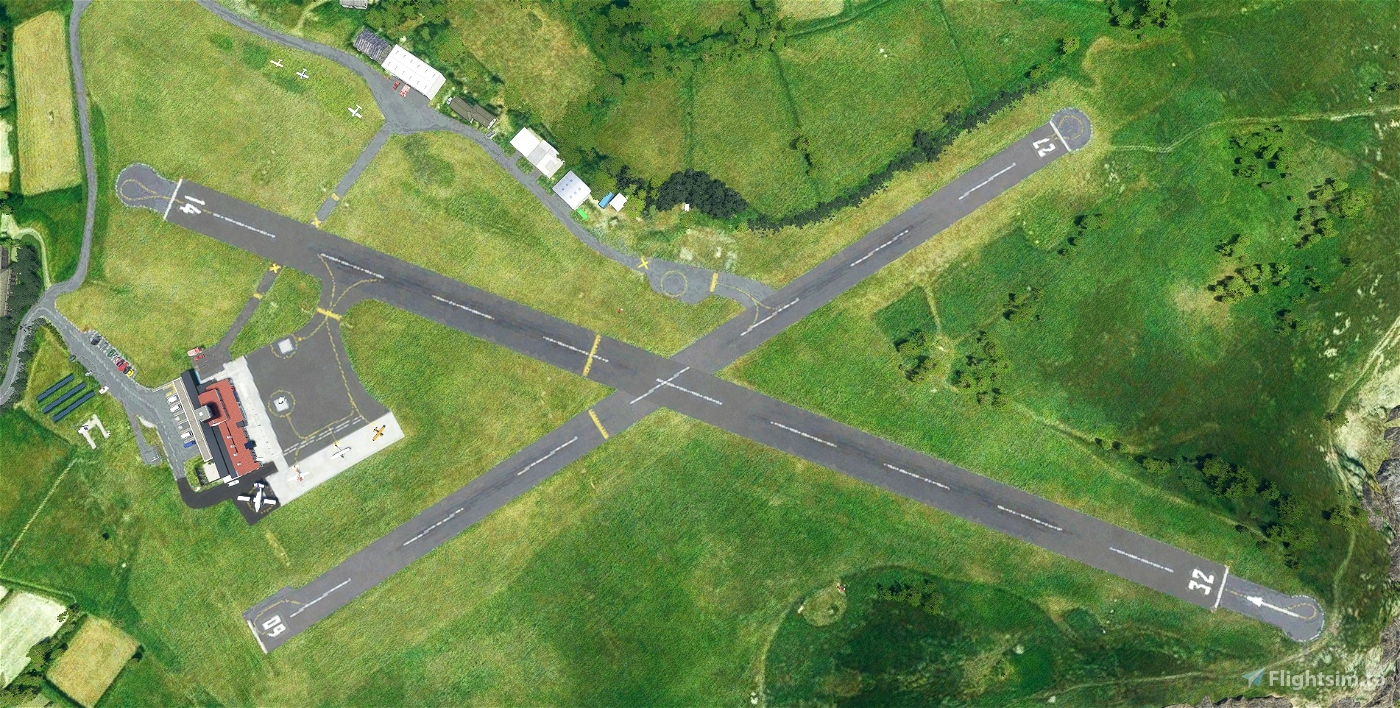 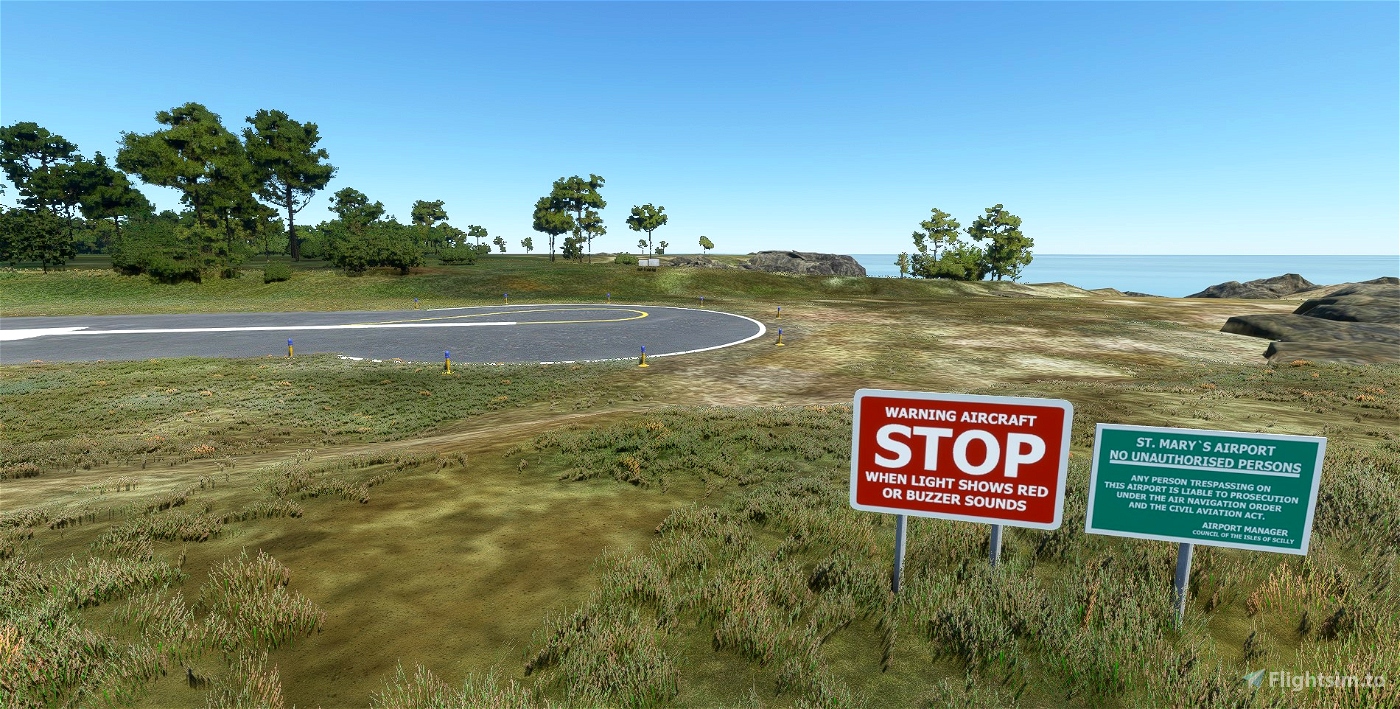 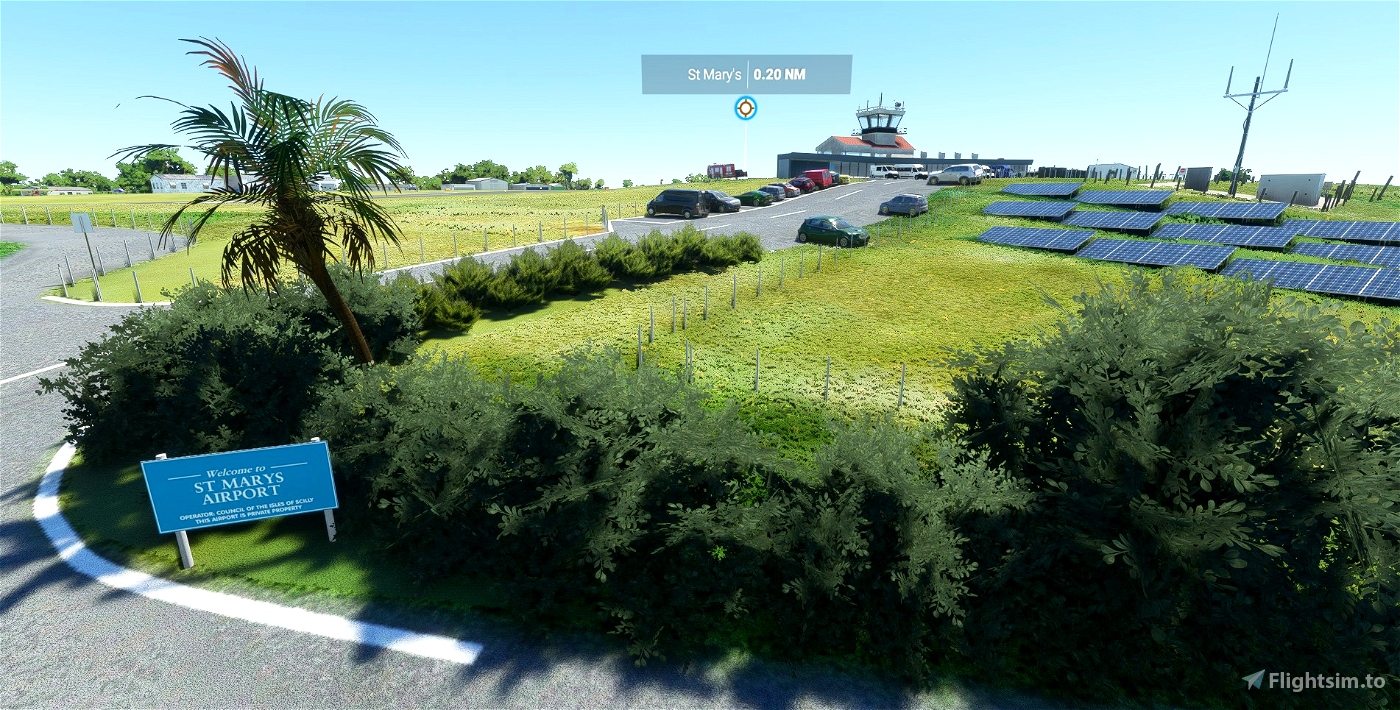 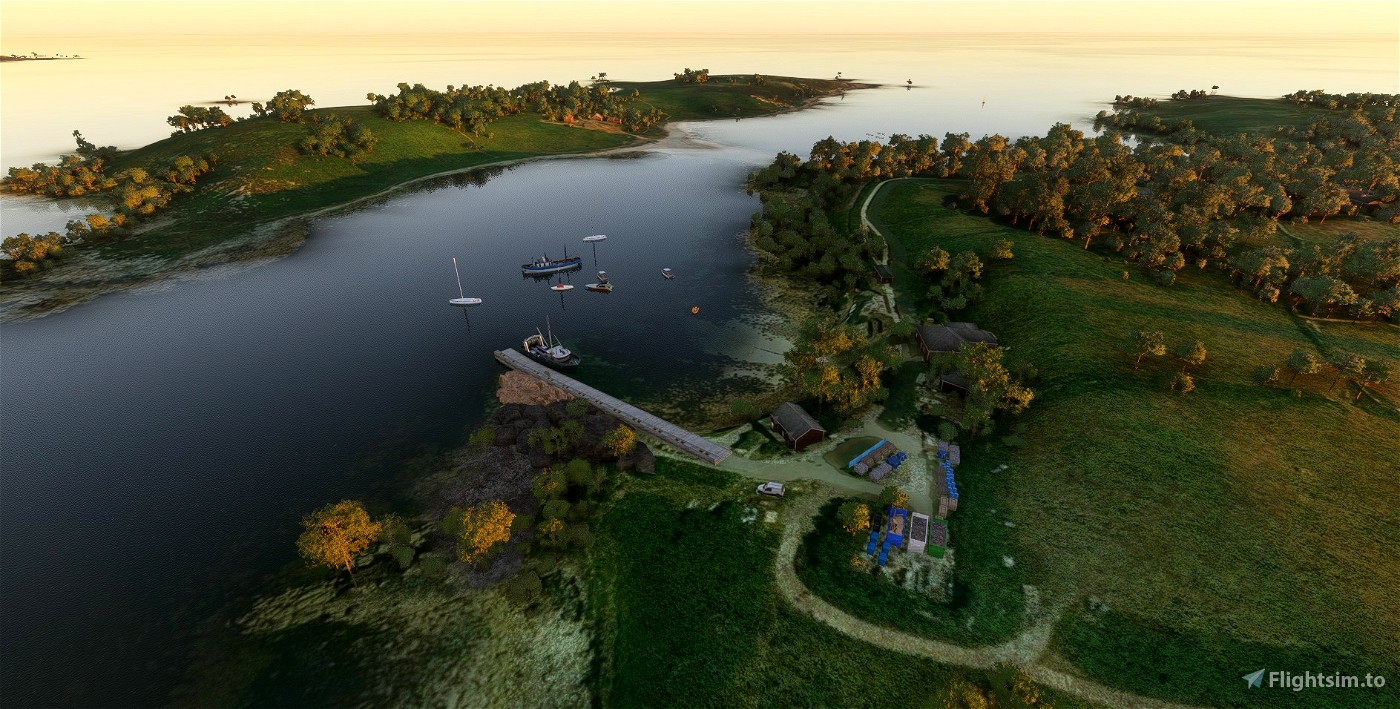 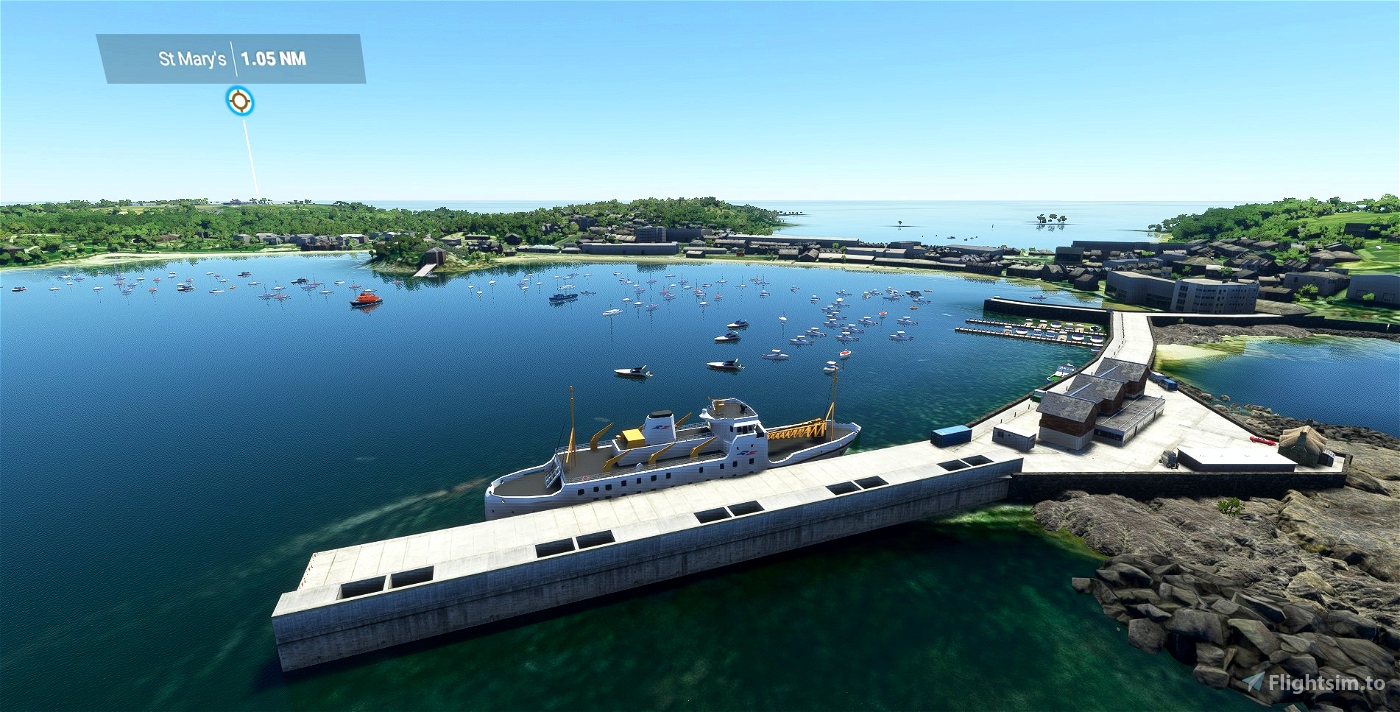 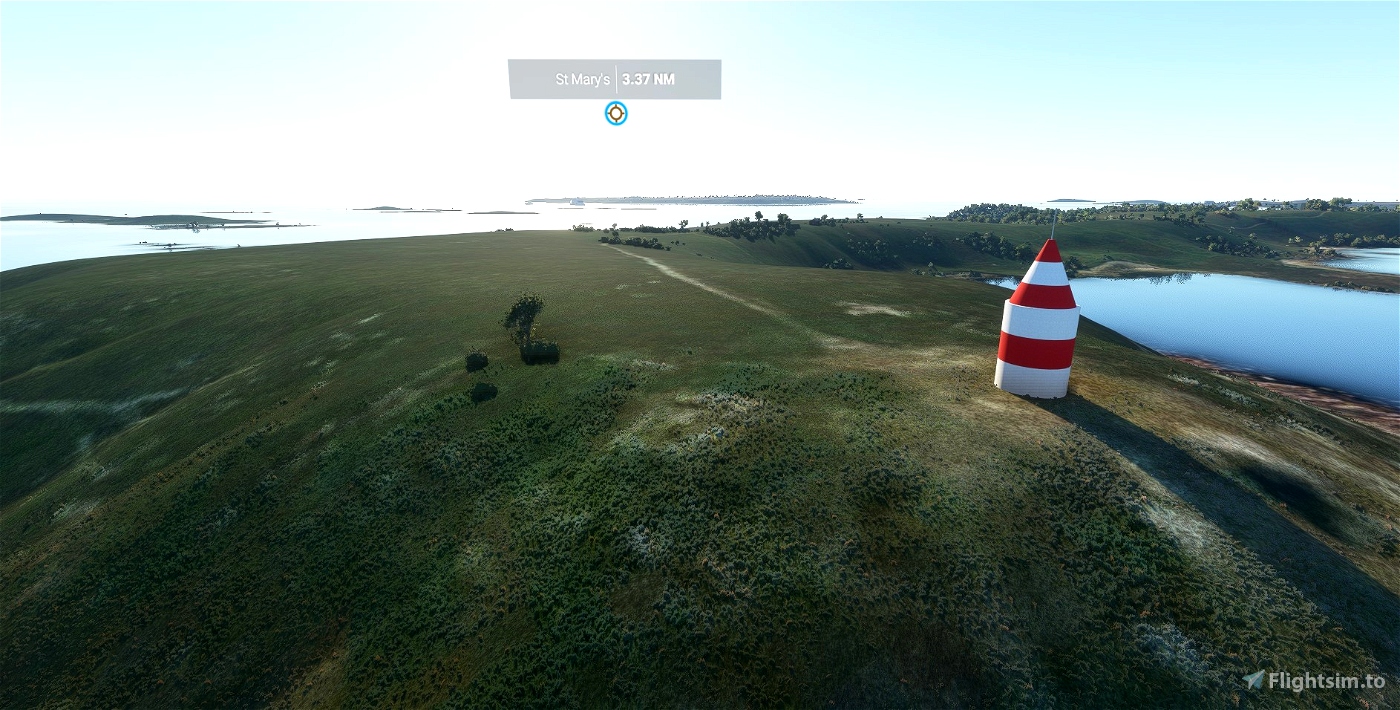 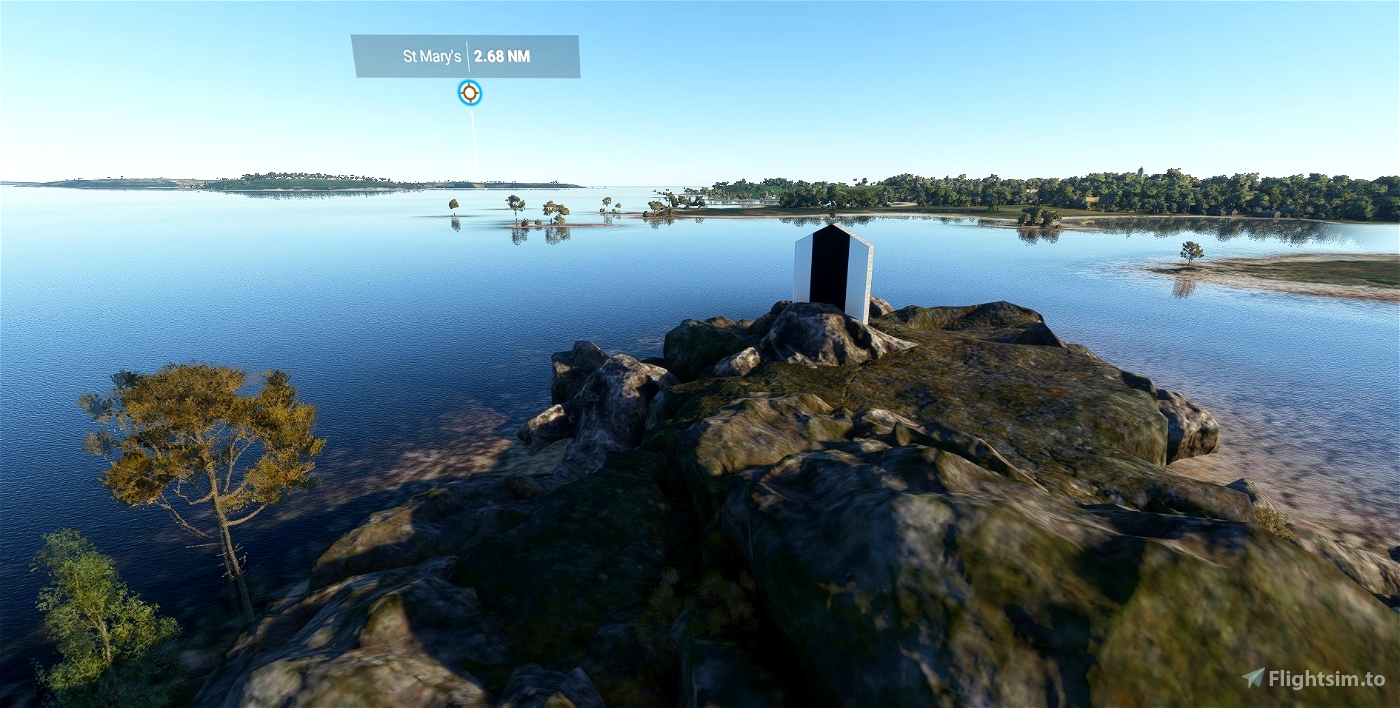 This is an upgrade of EGHE St Mary's on the Isles of Scilly plus a separate scenery file for the islands overall.

This is my favourite airport in the whole wide world. And indeed place. It also has the best public toilet in the world on the main harbour with a wonderfully low height to align your plumbing and refreshing breeze to flow up it. If you haven't been here in reality then you jolly well should go.

At the airport the runways have been erased and replaced with ones with a gradient closer to reality. This version has the entire site's elevations restored that were so rudely removed by Asobo by the UK update.

All ground textures have been changed. Most other buildings are replaced or fill holes where there weren't any before. A few parking spots have been added on the grass opposite the terminal and one at the hangars opposite the main apron.

The surroundings have been spruced up with road surfaces and foliage. Some of Dave's 3d people are lurking in the terminal - https://flightsim.to/file/5452/dave-s-3d-people-library

Rocks have been embedded in the runway approaches to give you the willies. It's no good approaching when it's only that blotchy velvet stuff. I want you to feel naked terror.

It has a new taxi system but the AI can't cope with it, just as it couldn't with the original. Parking space 12 is inside a hangar.

The scenery file adds boats and quays, the odd other feature such as the day marks and a faintly cheesy Longships lighthouse off Land's End which is landable in a helicopter.

The main thing the whole area could use is rocks embedded and trillions of them but that's a very painstaking process so I ain't guaranteeing a completion date. It's also possible that an entire area filled with them will go pop in mad. I'll have to experiment.

There is an alternate download of the airport without ground textures if you get any crashes as that's the usual cause.

This mod does a very nice job improving the shorelines - https://flightsim.to/file/26228/isles-of-scilly-shorelines

If you haven't seen it, to go in partnership with this is Tresco Heliport - https://flightsim.to/file/598/eght-tresco-isles-of-scilly-uk  but that's very STOL only.

Bishop Rock lighthouse is included with the scenery file, but there's a much better version here that you should be using  - https://flightsim.to/file/15955/bishop-rock-lighthouse-helipad

If you end up seeing two versions then there's a separate download of this scenery file minus the crap Bishop Rock that you'll see when you hit the download button.

Adds a heliport to Round Island lighthouse - ICAO EG45 - to the scenery file since there's a pad there in real life.

Re adds Bishop Rock lighthouse, but only because a shockingly low number of people are downloading the far  better standalone version. If you already have that it will still override this one.

Also added lighthouse beams to Longships lighthouse off Lands End and Round Island.

At the airport I've removed the trees from the airport area and fiddled with a few other details here and there.

It has error when installing

There are two folders in the download so most likely you didn't go down an extra level. You need to paste the two folders individually in your community folder.

Gotcha! Thanks. I'll test and see

hello to you and happy new year

I have a little question : wheer did you find those static sailing boats

are they default MSFS object ? because I can't find them in the SDK objects list

thanks for your help

None of the sailing boats are in the standard object list. It's very silly that they're not included.

I think pretty much all of them are either from 3dwarehouse or open3dmodel.com

Hi Superspud...fantastic...just a small point the base of the EG45 Lighthouse was pink for me...sure that wasnt planned...

I'm not seeing that myself.

I will guess that you have another mod which has a texture with the same name for the missing texture and they're somehow clashing or cancelling each other.

The texture probably has a generic name like '_1' or something so I'll give them more exciting names with the next update.

It might be worth a redownload but perhaps it's an innate issue.

I can confirm that this appears to work fine on SU6! I did two VFR landings here today on vatsim - it was meant to be one but the weather was getting naff over the mainland - and I didn't like the idea of not being able to see my way back so put her down for the night. The airport and scenery looked gorgeous and thankfully the crash to desktop kraken was nowhere to be found. Also I'm glad the ski-ramp on Asobos runway 32 is gone - hilarious though that was to discover for the first time it was a bit ridiculous and somewhat destructive to a cessna's landing gear!

I am slightly appalled they still haven't repaired the in sim version, particularly when the original was not too far off being totally on point.

Curses No CTD here but the vanilla-Asobo is quite inducing to place two fingers in me mouth.. Asobo what did you do to this time ruin my favorite airport ?

One of the best sceneries out there. I had to download all 3 files, for the scenery to show up. I made a video, to highlight, the excellent workmanship & detail you put into this https://youtu.be/guf0HFlmJsM

Both v2 and v2.1 have a problem (possibly earlier versions but not tested). If you depart from EGHE but then want to restart your flight the blue loading bar crawls slowly to the end and then just sits there forever, no inputs work and you have to kill the sim via task manager or similar to exit. Tested with both mentioned versions as the only items (one at a time) in the community folder. Flight restarts without a problem if nothing is in the community folder.

I only managed to replicate it once with the usual version. No idea why it's happening.

I've just uploaded a version of the airport without flags or ground textures, both of which are the main causes of bad behaviour, so give that one a try.

Hi, could you please include the option to remove the Bishop Rock Lighthouse?

I use this mod, and now there's 2 lighthouses https://flightsim.to/file/15955/bishop-rock-lighthouse-helipad

If you rename the better lighthouse folder to this - zz_Bishop_Rock_Lighthouse it will override mine.

That works for me and that's the folder name it downloaded with so I assumed it was the same for everyone. Maybe the developer changed that for the pack with all of them combined.

You can find a review here:

I love the attention to detail and all the little extras to discover, like the cyclist on the road by the airfield etc. The new contouring looks great, I don't know how accurate it is since I didn't have my spirit level with me last time I was there, but even though I don't fly "au naturel" the landings certainly have a pucker factor in the nether regions.

Good advice about the lighthouse by the way:

Thank you very much for sharing this great addon with us!

With version 2.0 there are two files: "Isles of Scilly-Superspud 2.0_bOwD9" and "EGHE St Marys No Ground Textures_SP4K2". Where did the scenery file go?

Can you explain real quick? Thanks.

The scenery file is included in the main download folder. There are two files in there. The no ground textures download is purely to replace the airport file if it crashes for you.

wow! what can I say. This airport is phenomenal. Superspud...you've done it again, but better and better. Love the runways, terminal (and food), parked aircraft, foliage, rocks, flag! and all else. I have followed other comments and pass on that after loading this and Land's End, I didn't have to delete or remove any files...just added these into the Community Folder. All OK for me.

Thank so much for your efforts.

Thank you very much for this great add on

I'm going there tomorrow. Two weeks camping on the Garrison.... and look... the sun just came out. YEYYY!!