Ever Given Landmark , Canal de Suez.

Like many, this event was the opportunity to go and discover the Suez Canal in Msfs, it is a simple scene, I did not represent the traffic jams which results from it because of the lack of different assets for ships. - A...

Like many, this event was the opportunity to go and discover the Suez Canal in Msfs, it is a simple scene, I did not represent the traffic jams which results from it because of the lack of different assets for ships.

- A more complete version of this event was created by FlyBoyRez1, using the Global AI Ship Traffic addon is available here: Ever Given - Suez Traffic Jam
- Also, another scene created by Travolt which represents it as it is currently partially unlocked: Partially refloated Ever Given Ship

The Ever Given is now free and everything is back to normal in the Suez Canal, Thanks again to all of you for your messages and it was nice to fly together at this event, you are Awesome ! :D

- Added the Ever Given container ship as a Landmark , which stuck in the Suez Canal on March 23, 2021.
- Tested and created with msfs2020 stock plus free world updates.

2021 Suez Canal grounding
Main article: 2021 Suez Canal obstruction
At 07:40 Eastern European Time (UTC+02:00) on 23 March 2021, the ship was passing through the Suez Canal on its way to Rotterdam from Tanjung Pelepas[10][7] when it became stuck and blocked the canal.[6] According to a statement by the Suez Canal Authority, the ship ran aground diagonally after losing the ability to steer amid high winds and a dust storm.[11] In a separate statement, Evergreen Marine said that it had been told the ship "was suspected of being hit by a sudden strong wind, causing the hull to deviate from [the] waterway and accidentally hit the bottom".[1][11] The ship ended up with its bow wedged in one bank of the canal and stern nearly touching the other.[12]

The ship had been running fifth in a northbound convoy, with fifteen vessels behind it when it ran aground. Traffic in both directions was blocked for at least 4 days, leading to a traffic jam of over two hundred vessels.[1][13] Bernhard Schulte Shipmanagement (BSM), the technical manager company that manages the container ship, denied earlier reports that the vessel had been partially refloated.[14] In addition, trade experts are worried of a supply chain delay and tension due to the indefinite delay to not just the trapped ships, but any vessel that was planned to cross the Suez.[15]

Eight tugboats worked to re-float the vessel in collaboration with a Komatsu excavator removing sand from the side of the canal where the bow of the vessel is wedged.[16][17] After an overnight break the rescue work resumed in the morning of 25 March.[18]

An unnamed Egyptian official was reported as saying that refloating the ship would take days if not weeks. Lt. Gen. Ossama Rabei, head of the Suez Canal Authority announced, "The Suez Canal will not spare any efforts to ensure the restoration of navigation and to serve the movement of global trade." BSM and SKK said that all 25 crew are safe and accounted for. All crew are Indian nationals and remain on board.[19][20] And there had been "no reports of injuries or pollution". Egyptian meteorologists reported that high winds and a sandstorm had affected the area on the day of the grounding, with winds gusting as much as 50 kilometres per hour (31 mph).[21]

Addressing a press conference on 27 March, Rabie, chairman of the SCA, said that weather conditions were "not the main reasons" for the ship's grounding, adding, "There may have been technical or human errors ... All of these factors will become apparent in the investigation."[23]

The ship was finally freed in the afternoon at 15:05 EGY (13:05 UTC),[25][26] and the ship started moving under tow towards the Great Bitter Lake for technical inspection, the first step to reopening the canal,[27] planned for later that day.[26] After the canal had been checked, in case there had been damage, the Suez Canal Authority informed shipping agencies that shipping was to resume from 19:00 local time (17:00 UTC).[28]

Show your gratitude by making a donation. This mod was brought to you by Zepingouin35. You may donate if you like.

2 year(s) ago
Hey, This is Donut_enforcement from TikTok. Thank you for letting me share this mod and made the world have a good laugh! Your mod went viral! I posted a short video on Tiktok and the full video on my Youtube channel. Thank you for the great laugh and good time with it.
1
0
Reply

Hey! Thank you especially to you too, your video made me laugh a lot and it is also a pleasure to see the community of simmers having fun together and being put forward. Fly safe Mate!

Yes I got the news so I went to see the replay, it's cool!

2 year(s) ago
Nice work... I hope you added about 300 other container ships waiting in line to pass, lol
0
0
Reply

Thanks, but it's just a quick little scene to mark the occasion 😀 ,You have FlyBoyRez1 addon; which is more complete and reproduces the traffic jam, the link is in description.

2 year(s) ago
It was only a matter of time before this existed.
0
0
Reply

2 year(s) ago
Thank you all for your comments, glad you appreciate this easter egg ! 😀
0
0
Reply

In Germany we would say Ehrenmann (Man of Honor).

2 year(s) ago
I added this to my community folder and it is not working... anyone advise?
0
0
Reply

Hi, did you unzip the archive first, or maybe you didn't install the world free update? (it is possible that the Cargoship asset comes from one of them , i'm not sure about that).

2 year(s) ago
I was there a few days ago. Now I'm returning with your boat. Awesome
0
0
Reply

2 year(s) ago
Wish I had seen this 2 hours ago. Was flying over here today
0
0
Reply

wait, you were looking for this? you knew that this disaster was going to happen o.O? LOL i want that crystal ball 😋 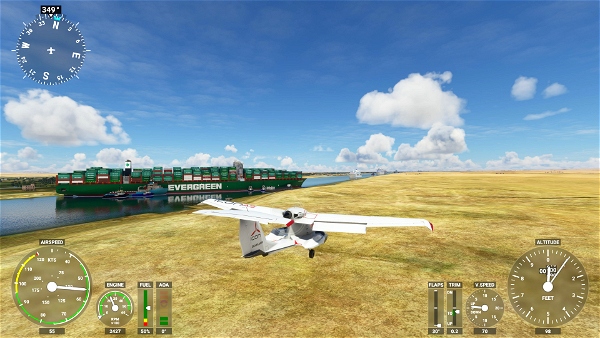 These users have donated to Zepingouin35 to keep him making awesome add-ons everyone can enjoy.