06/21/21 VERSION 1.7.5: WU5 and OrbX Iceland Mesh Hotfix (Compatible with WU7) This hotfix fixes some clipping with this addon and the OrbX mesh along with fixing some issues present in the OrbX mesh itself around Reykjavik. ICELAND OVERHAUL (Make sure you download the Nordics update pack from... 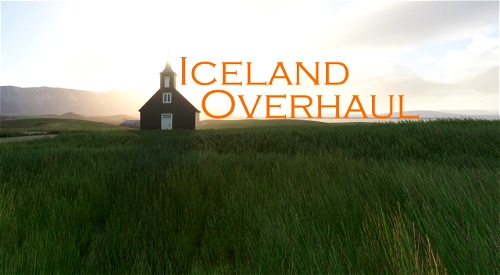 This hotfix fixes some clipping with this addon and the OrbX mesh along with fixing some issues present in the OrbX mesh itself around Reykjavik.

(Make sure you download the Nordics update pack from the In-App marketplace to get Asobo's higher version of hallgrímskirkja and Perlan. These have been removed from my addon so that they do not conlfict with what Asobo have added.)
This addon currently contains:

The tree coverage fixes were based on a map that shows tree coverage of the country. The structures cover iconic and VFR landmarks such as Harpa, and the DC3 crash site along with many other buildings within Reykjavik and the rest of Iceland to bring it to life. There are multiple POI markers around the shores of northern Iceland where you can fly to see Orcas and Blue Whales!

To download, just extract the folder into your community folder!

All model attributions are available in the download file.

This addon by ORBX adds an amazing performance friendly Mesh for all of Iceland (and its free!):
https://orbxdirect.com/product/iceland-mesh-msfs

This addon by flying_coyotus adds some of the amazing rock formations around Iceland: https://flightsim.to/file/14942/iceland-rock-formation-wip

Show your gratitude by making a donation. This mod was brought to you by Baddweapon. You may donate if you like.

Is this project still alive and compatible with the current SU9?

And still works with the free ORBX mesh?

Is this compatible with the latest updates. SU9?

Your Iceland Overhaul makes for a unique flying experience, thank you ! Now I wonder if its this or another mod or the latest SU9 update, my sim now crashes when I get close enough to Reykjavik , from any angle, could you check to see if its possible with a recompile? It could be my old version of BIRK - version 1.6 Icesim EDIT: Now to be tested again since Asobo recognized some flaws... 😊 Thanks! And for those who read: I have given 5 stars but it won't show up ...

I'll take a look and see if I can recreate the issue on my end!

its happening in the vanilla stock sim without the mod too and was discovered during beta:

OK thanks ! That means I wait for Asobo to fix it 😊 I just Love Reykjavik you see, cant wait to see the town again, Just love how you made this addon with all the landmarks and the street...Laugavegur I think, what a great place, 😀 Cheers!

10 month(s) ago / Thanked by Baddweapon

Great job! Really awesome and engaging. I thoroughly enjoyed this pack. Looking forward to more of your work.

Well it works for me so I would think so

Thank you for such a nice work

1 year(s) ago / Thanked by Baddweapon

Please check compatibility with SU7........this package is valued very much !

Flighsim always freezes at 64° 20' 45.08" N 21° 59' 51.14" W when departing straight north from BIRK (have swiched off all meshes)...Anayone got the same issue? Add: This problem also happens without this mod, does anyone have the same problem?

I've heard about this happening in the past as well, havent been able to recreate it with/without the mod. I'll take a look again and see if I can find anything.

If you have the Coastline glitch fix (Partial) mod installed, there are reported crashes caused by that mod, not the overhaul one.

Hello , thx for your mod

when i fly over Iceland , suddenly all the landscape and the sea disappear

Hi, I had the exact same issue. If you have the mappamundi-coast-fix addon, disable it. This is what fixed the issue for me.

1 year(s) ago / Thanked by Baddweapon

There seems to be no problem with the latest update SU5.

@Badweapon You should confirm it so that it appears as compatible.

I wish an SU5 update of this package could be released please..

It's compatible with SU5!

gorgious, but i don't have the cathedral????

I removed the version I had added in the last update since Asobo added their own model. Make sure you download the free Nordics pack in the in-game marketplace!

That will provide you with the new models from Asobo.

I see in your pictures you have some of the landmarks modeled by Asobo in the most recent update (Nordics) Is there an update to remove these?

Is this product compatible with Keflavik from MK Studio?

Just prefer to ask before messing it up

Yes! My most recent updated removed the models I had added for the cathedral and Perlan.

Thank you, because I enjoyed your work a lot, specially in the north. I played with the whales jeje

2 year(s) ago / Thanked by Baddweapon

2 year(s) ago
Thank you very much that's great! I love this island 😊 I have installed everything recommended and I have a problem on the island with the airport (BIGR) the parking lot is not on the same level as the runway ...

That would be a problem with the BIGR addon. Hopefully it is resolved in an update!

After the update 1-7-5 the POI's don't show up anymore on the World Map. What went wrong with my installation?

Could you try reinstalling the add-on to see if the issue still persists?

I have not been able to recreate it.

Thanks for the mod. Also I'd like to report a bug -- some clipping in rocks near BIIA (Nordics and ORBX mesh also installed)

Thanks for this mod. Will this make Iceland realistic looking?

These users have donated to Baddweapon to keep him making awesome add-ons everyone can enjoy.