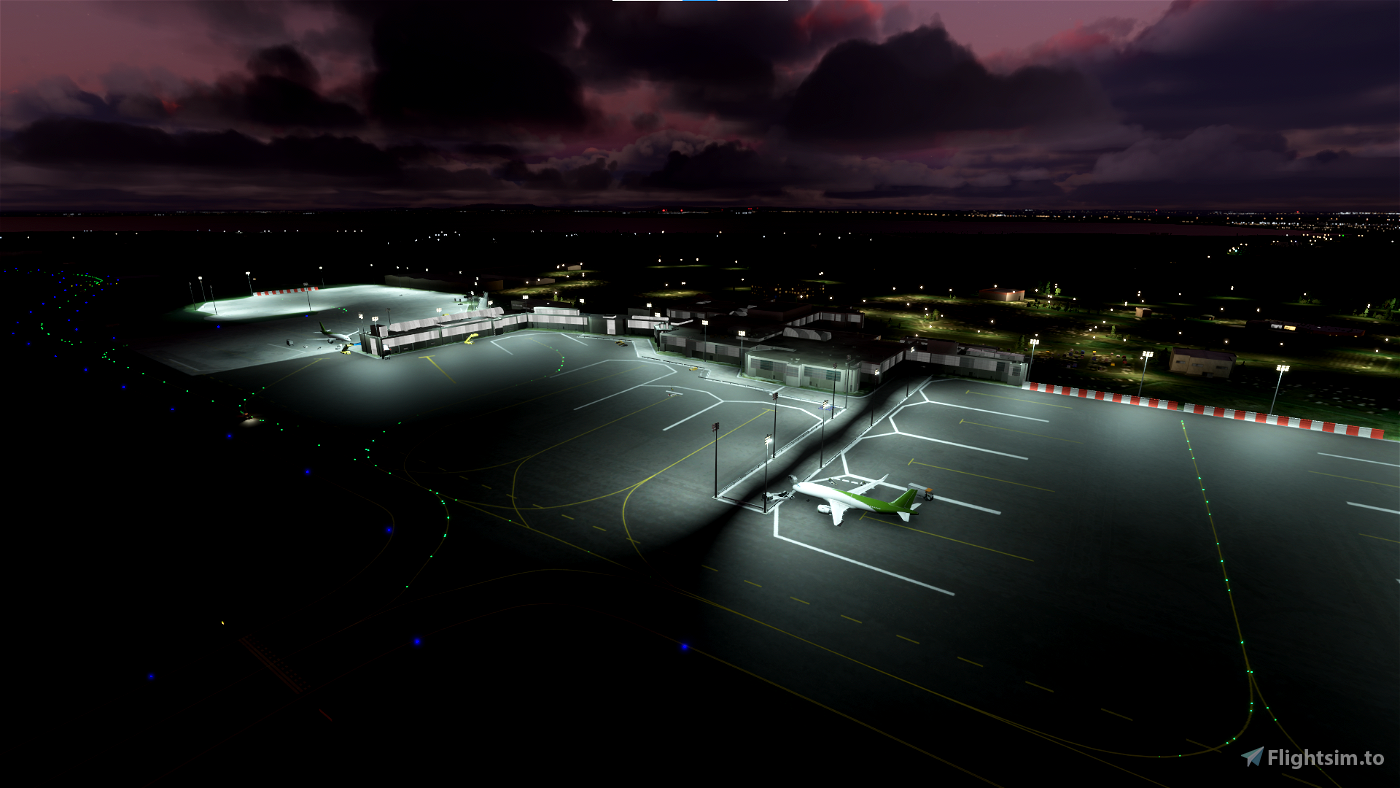 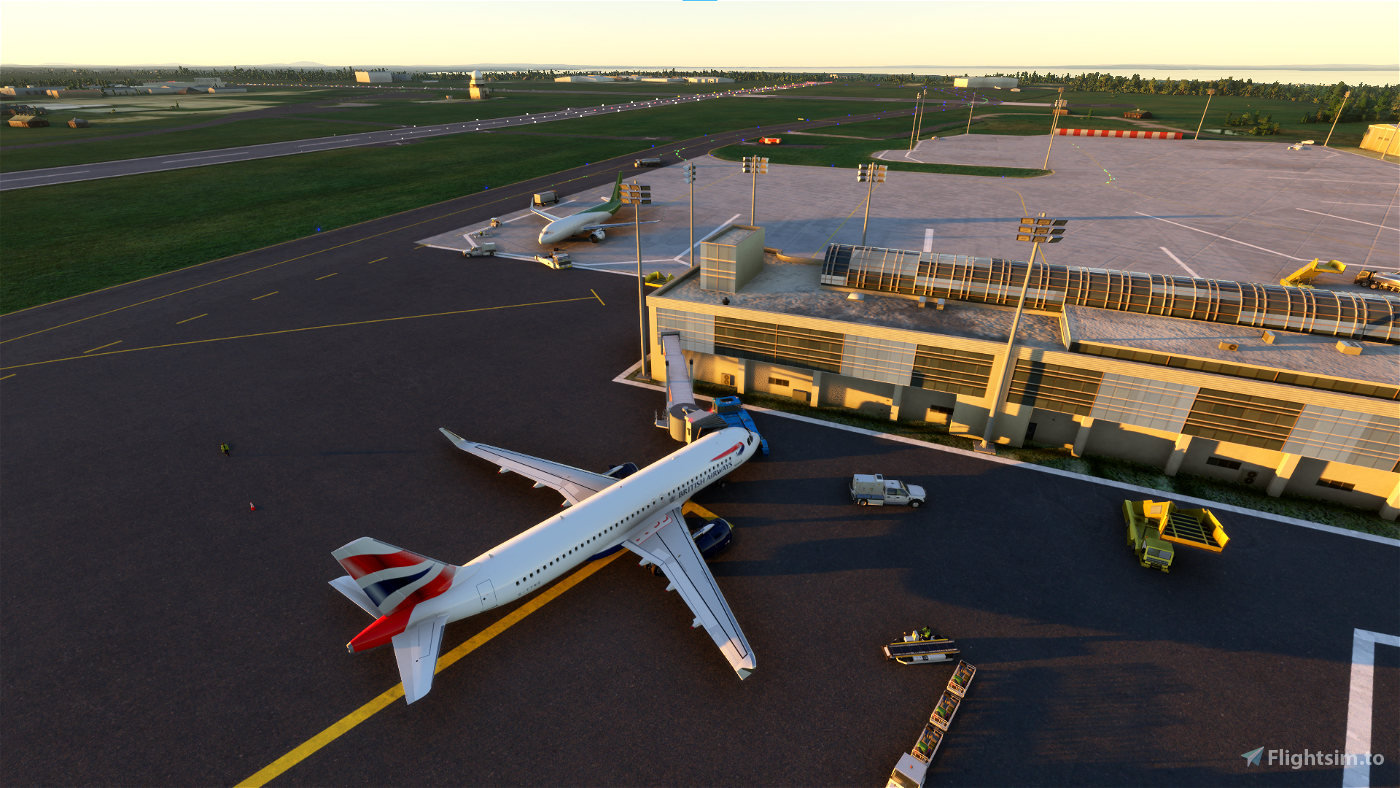 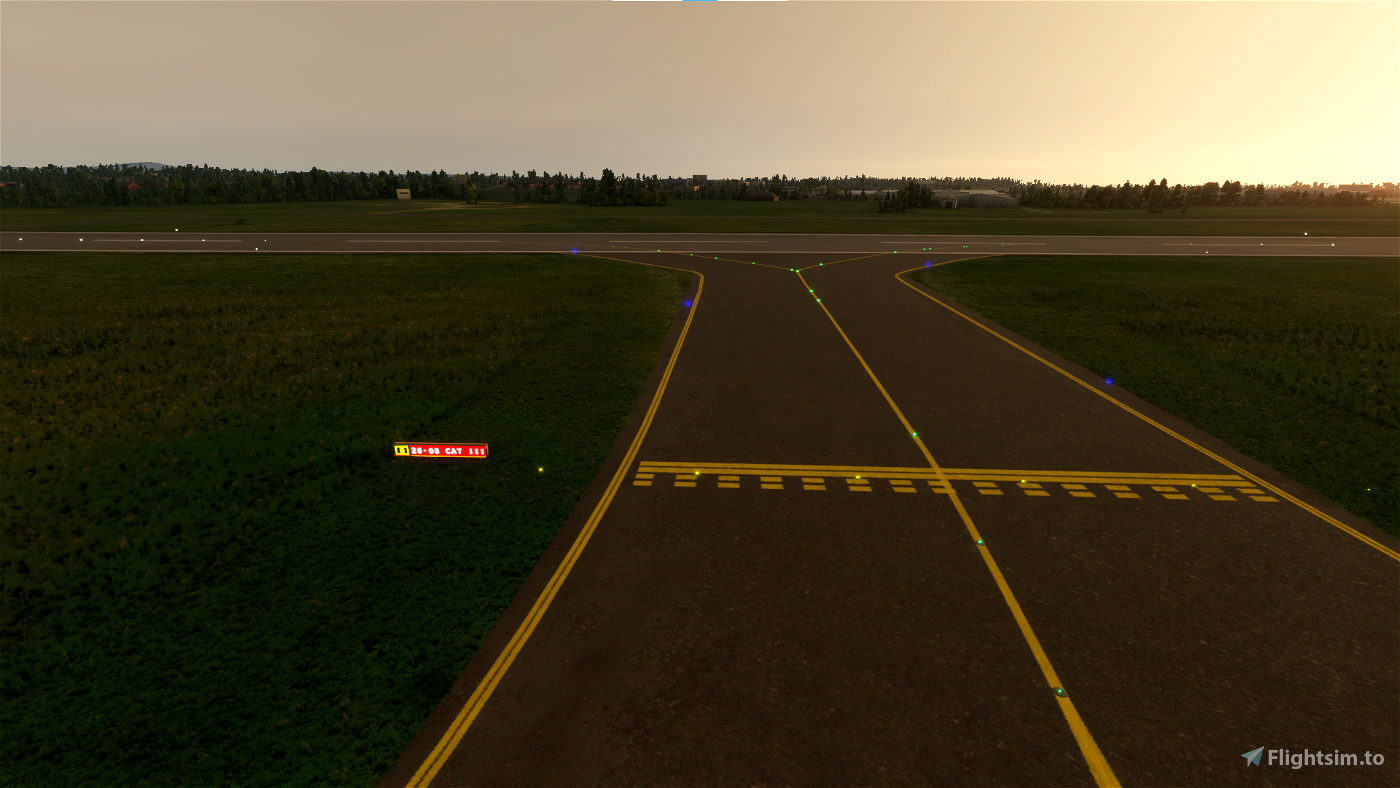 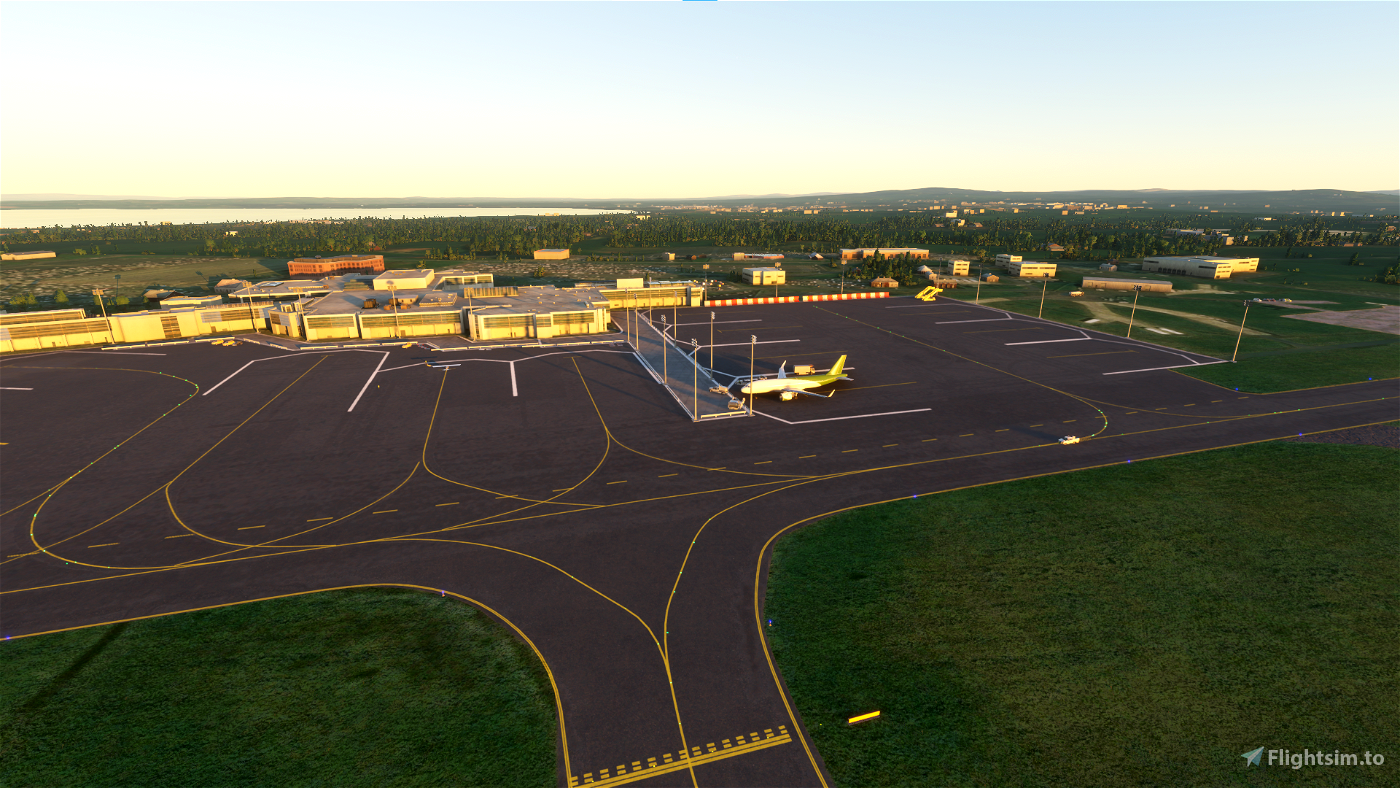 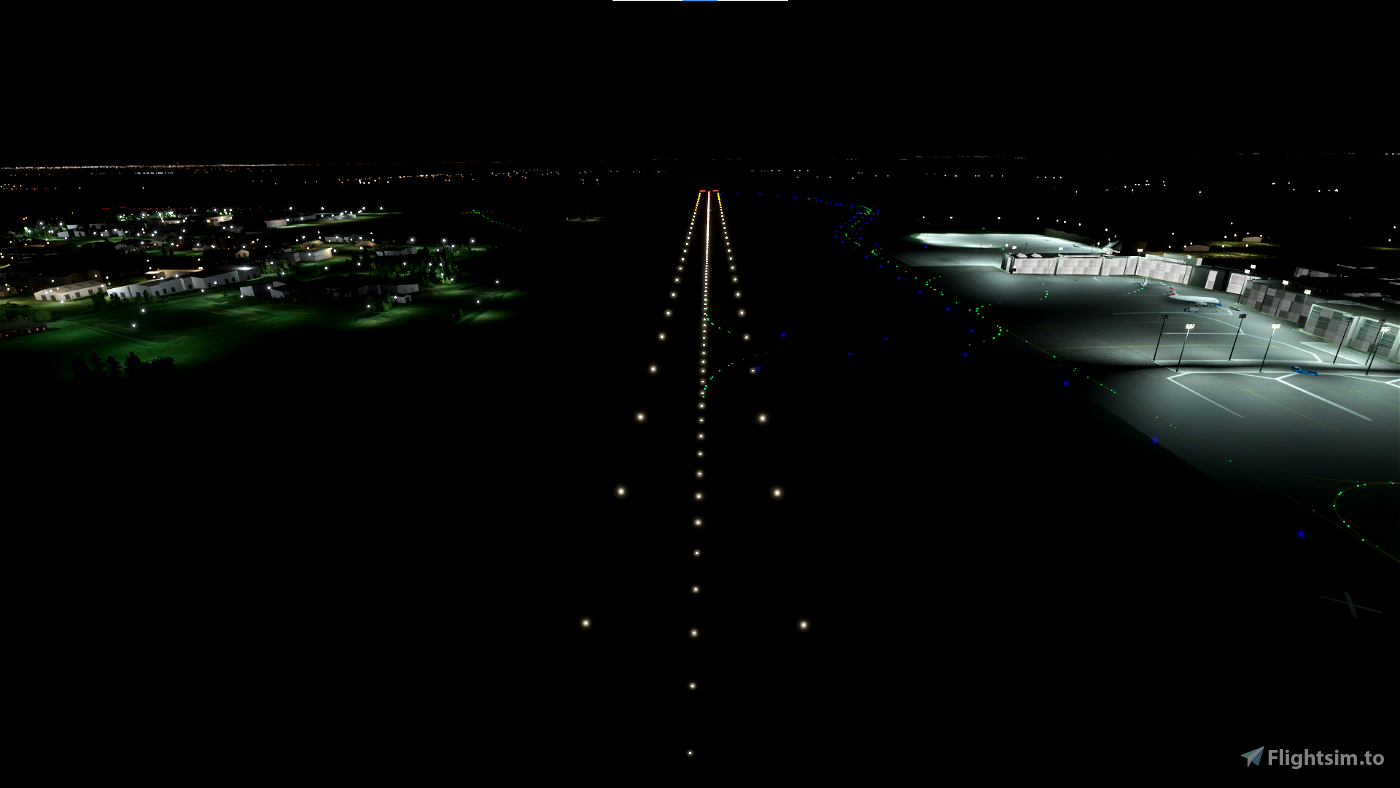 Let's be honest, the procedurally generated EGAA for MSFS is pretty lousy...so this cleans it up a lot!

I am not an expert in 3D modelling, so don't expect a fully blown add-on here with lots of eye candy. However, as far as functionality is concerned this is a complete re-work. No more grass taxiways!
I am hoping that one day there will be a fully developed EGAA, but I hope this improves things for now.

The main features of this modified airport include:
1. This is a starred airport with working ILS that will be auto-tuned by onboard computer when selecting ILS25 or ILS17 approaches.
2. The vegetation that blocked some of the approach lighting has been removed.
3. Parking is more in line with the real airfield parking stands- both for the main apron and the small GA aprons. Main apron has some markings added.
4. Gate 22 now has functioning jetway.
5. Taxiway signs added.
6. Added a stock SDK control tower.
7. Apron lighting added.
8. Correct taxiway network with lighting.

v 1.2 Update
The ground services team now confirm that ramp stairs will now be available to all airliners that request them.

1. Terraforming done on the airfield
2. Gate 21 restored to working status
3. Lots of scenery added around the apron area
4. Apron markings and taxiway markings tidied up

Installation is just an unzipping and placing the unzipped folder in the communities folder. There is an installation text file in the zip.

Feel free to report any bugs you uncover in the comment section below.

See my other airports in Northern Ireland:

tamalien replied Author
February 19, 2021
Reply
Version 1.4 should contain the closest thing I could find for the red van you mentioned.
tamalien replied Author
January 27, 2021
Reply
That isn't good. Please report back if this is a consistent bug, including details as to if it was a stand allocated after landing (and was it an ai aircraft or another 'live' player) or when you spawned in to the airport (and was it an ai aircraft or another 'live' player). If you have traffic nameplates turned on you can usually see if it was an ai plane or a 'live' player.
Watsi replied
January 27, 2021
Reply
Some additional info for you:
it was after landing at EGAA,
a position assigned by MSFS ATC (blue frame around the position),
it was for sure AI traffic (rarely fly multiplayer),
it was live traffic.
I don't know the specific parking position anymore. I think it was #9 (according to offical EGAA chart).
tamalien replied Author
January 27, 2021
Reply
Thanks for the feedback. I will try and work out if it is a problem with the airport mod or a problem with the game's ATC. If the latter there won't be much I can do to correct it.
tamalien replied Author
January 23, 2021
Reply
Well spotted! There is a terrain issue in that whole corner of the apron with a big drop down to where the parking stand should be. Instead of creating a parking stand there for our use, which I had initially, instead I tried to cover the issue by leaving the markings for a stand in place and inserting a stock A320. It recognises the slope which is causing the 'glitching' you describe. I haven't been brave enough to try 'terraforming' the area...However when I get around to that and if successful, then I will be able to have that fully available as a gate for our use. Update: This has now been fixed in version 1.1
Matthewlad00 replied
January 24, 2021
Reply
okay thanks so much :)

© tamalien - All rights reserved. Any reupload or redistribution of this file without the author's prior written consent is forbidden.
This Flight Simulator 2020 Mod was created by tamalien and shared in Scenery Enhancements » Intl. Airports for Microsoft Flight Simulator.