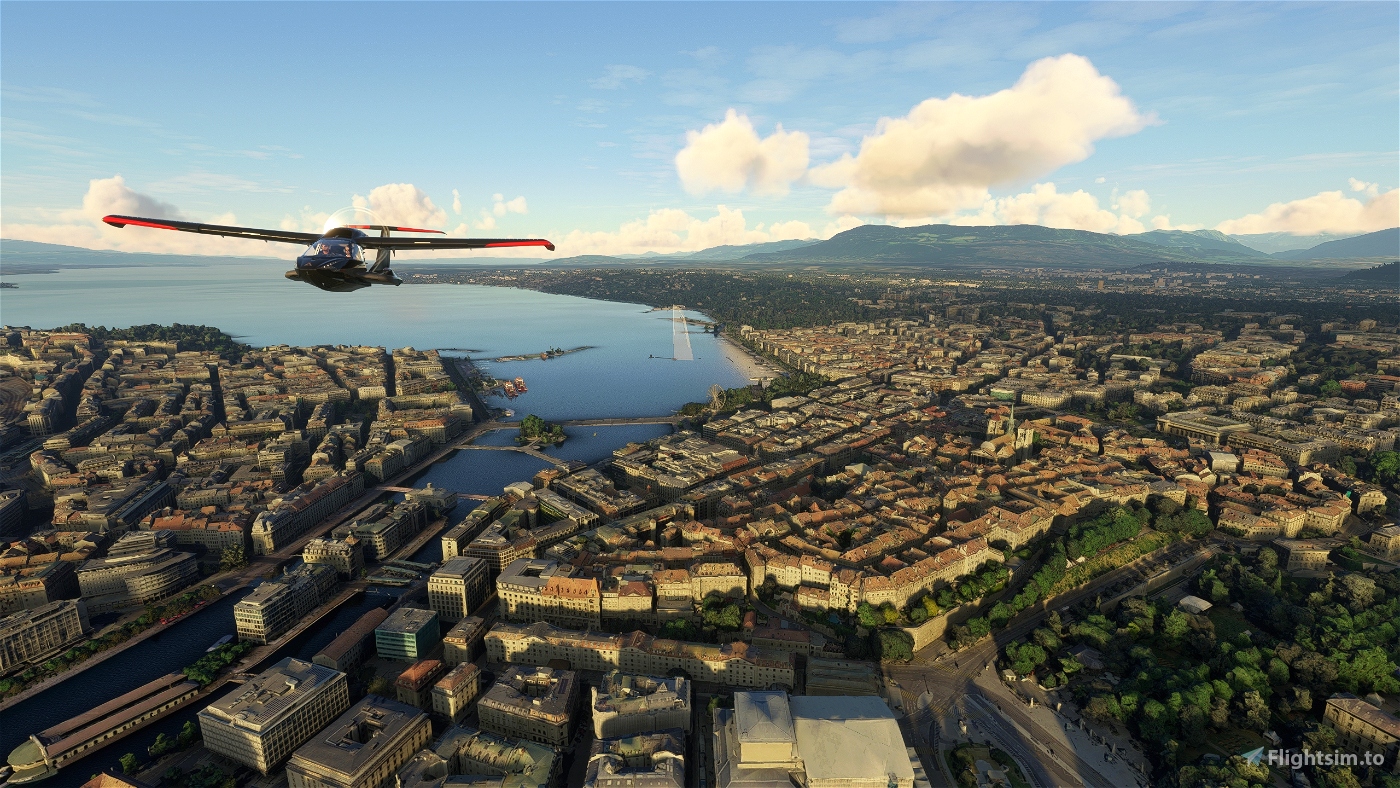 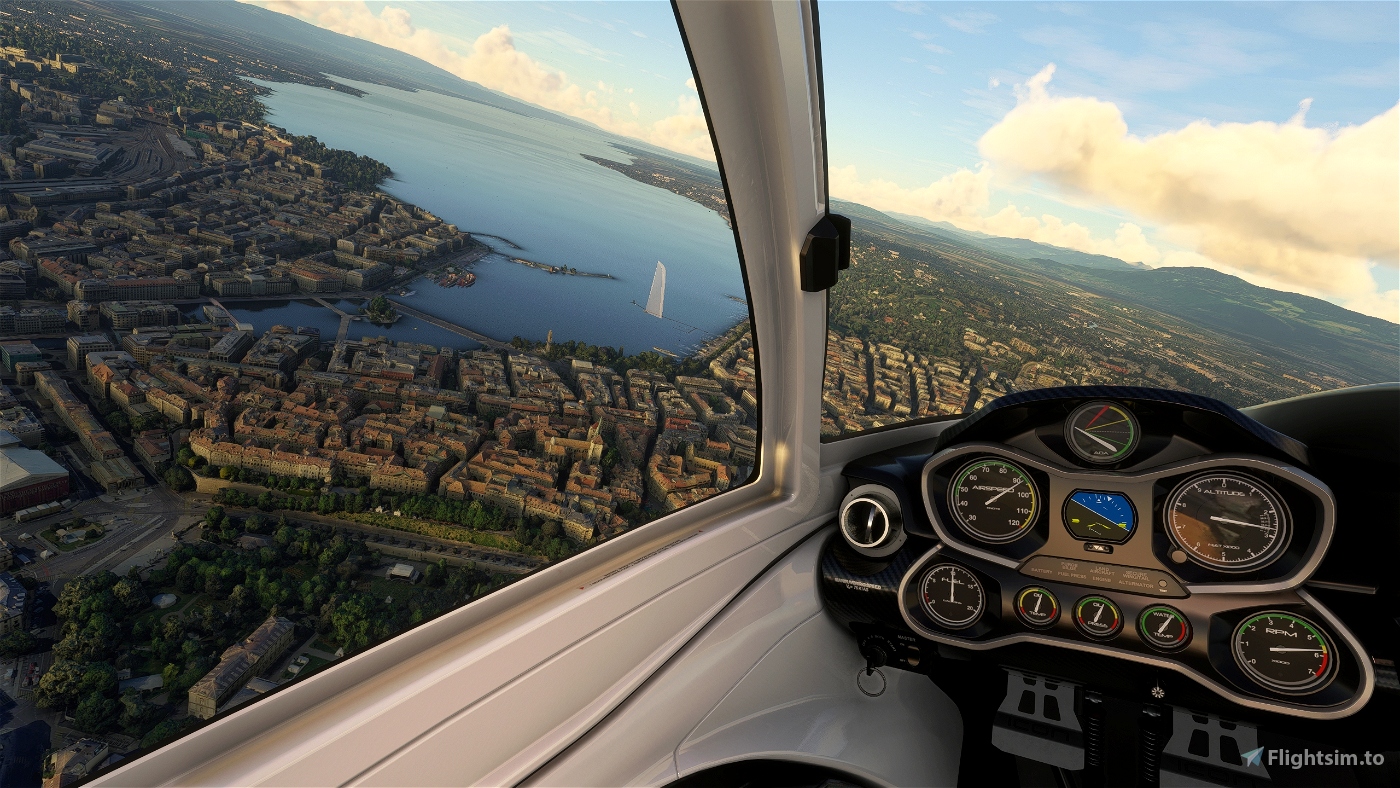 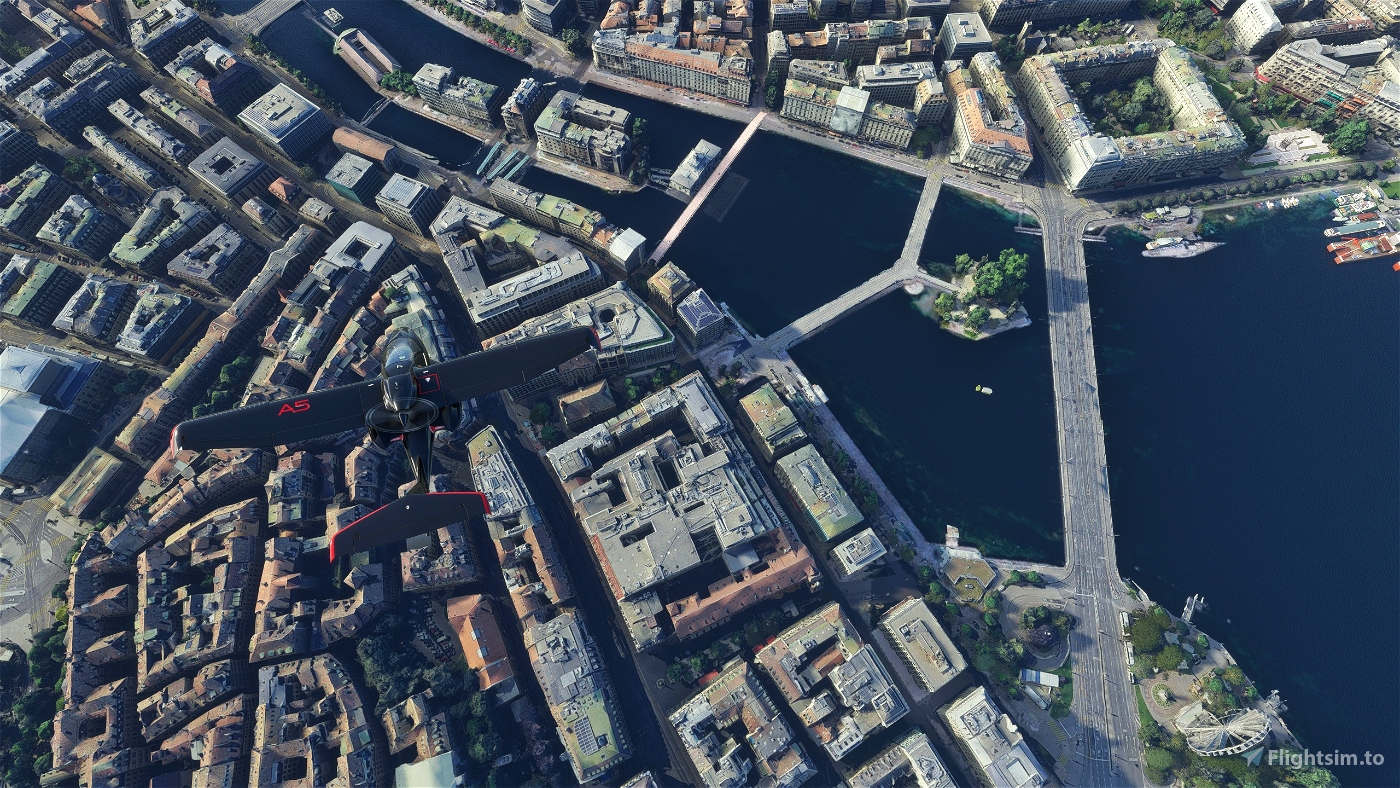 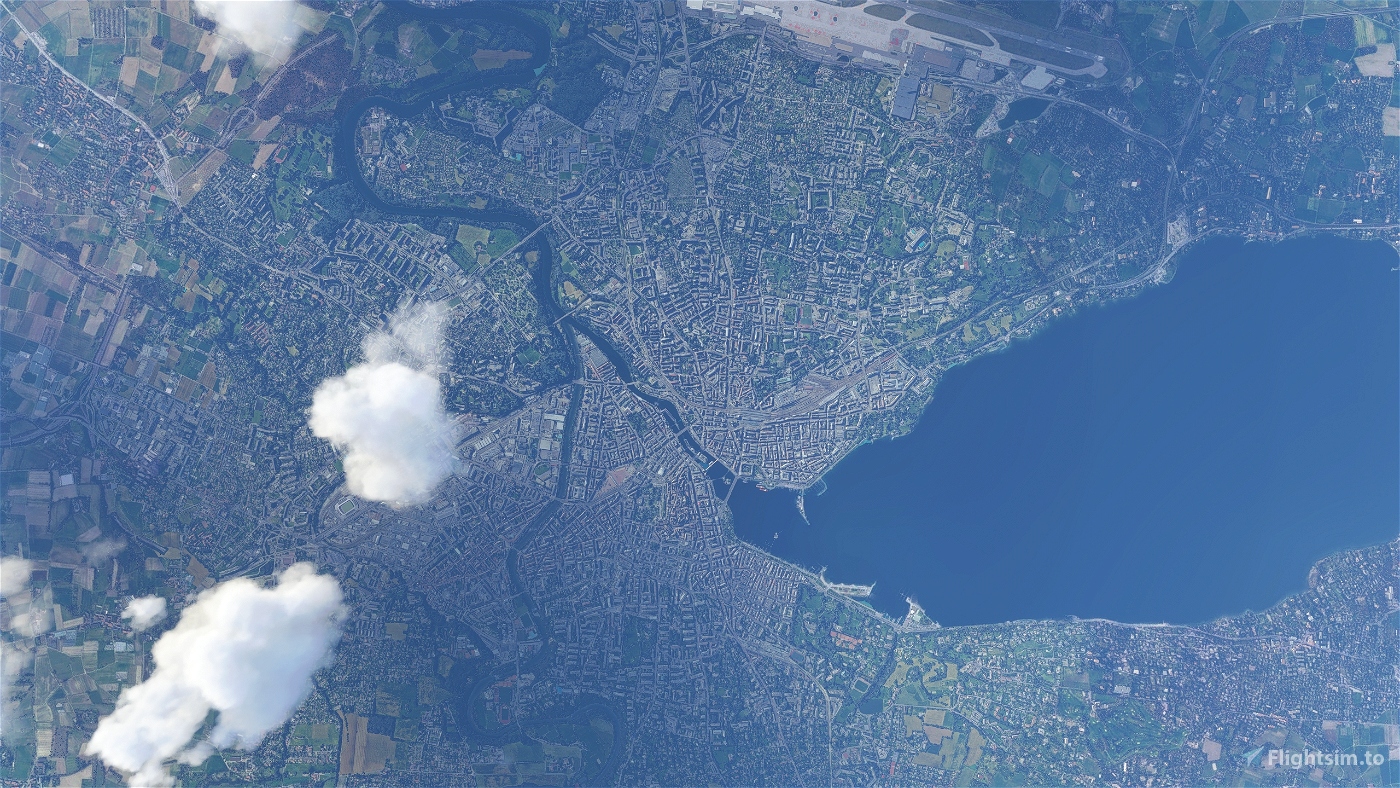 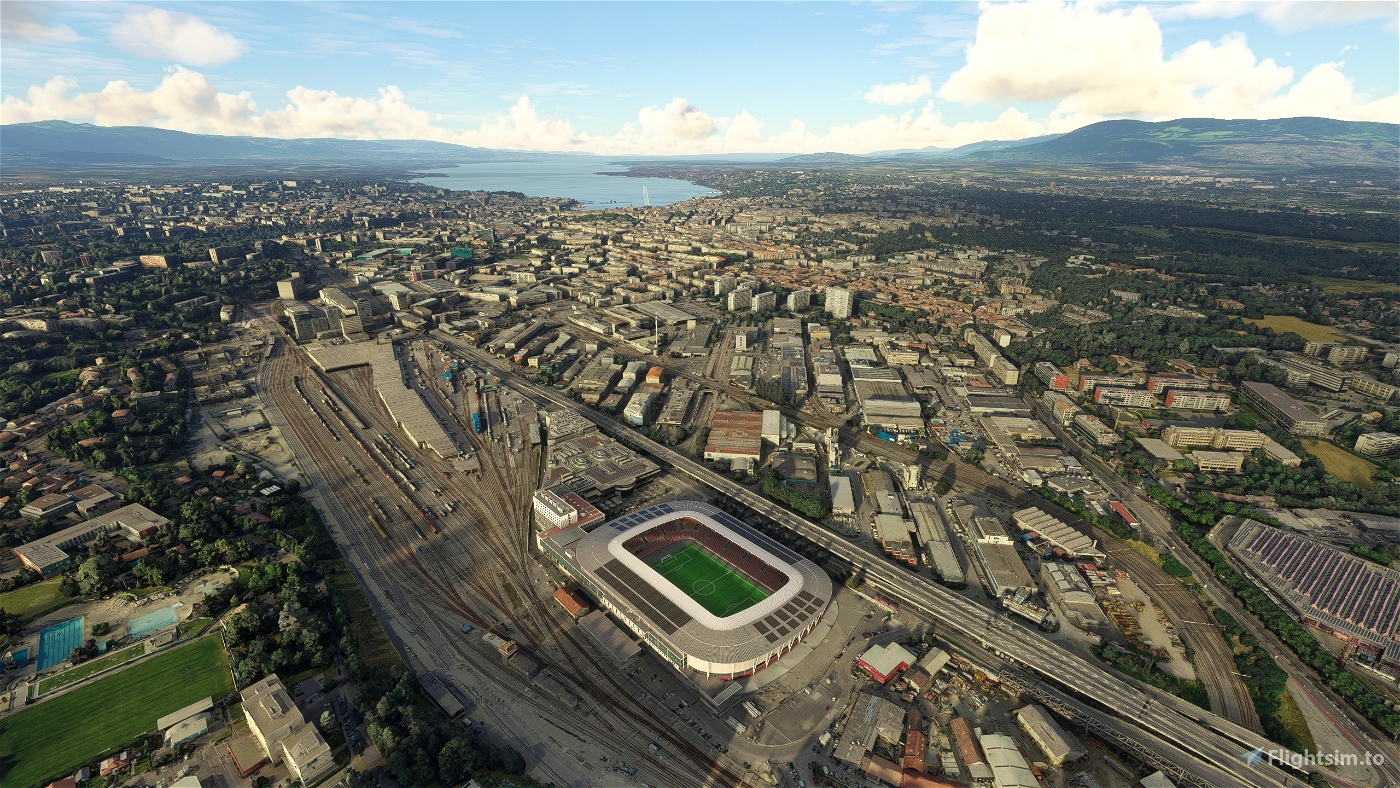 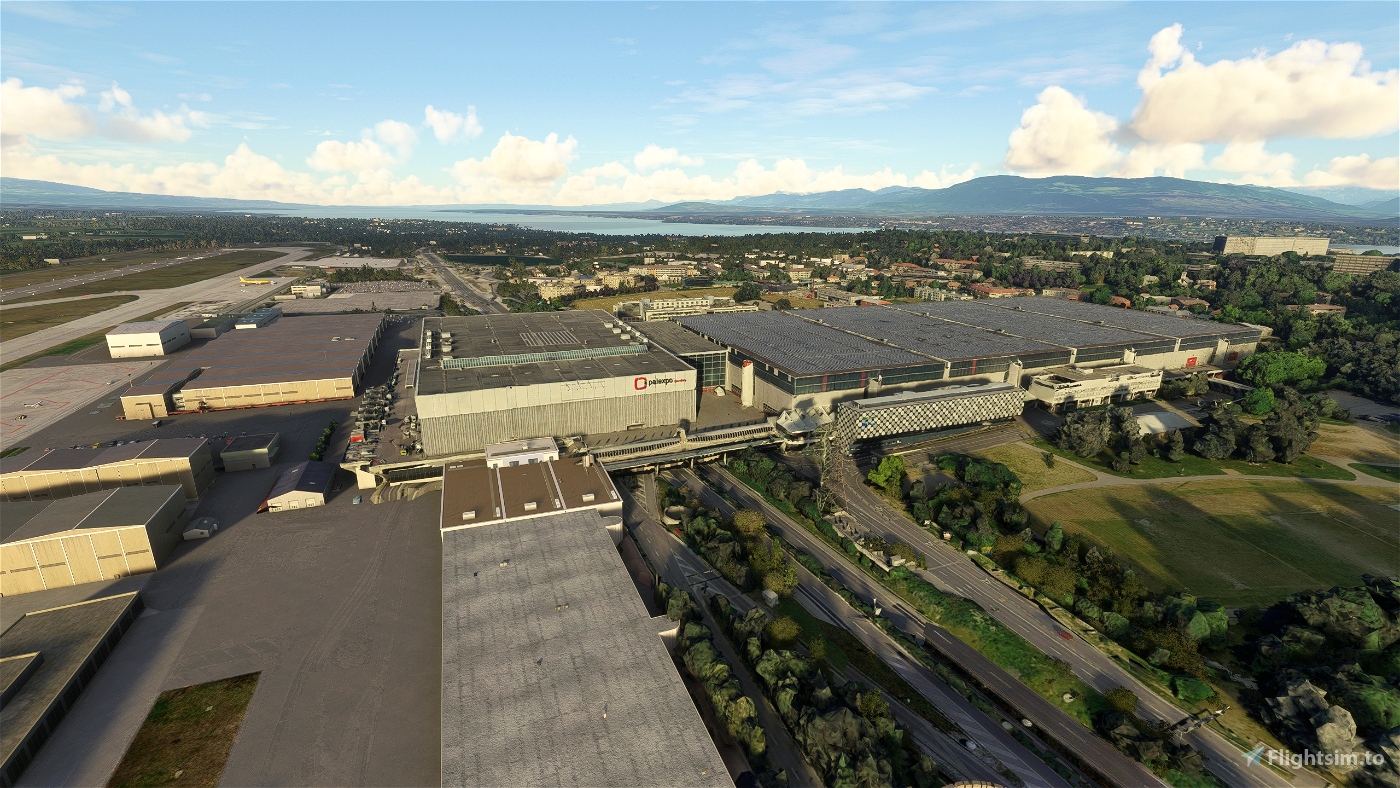 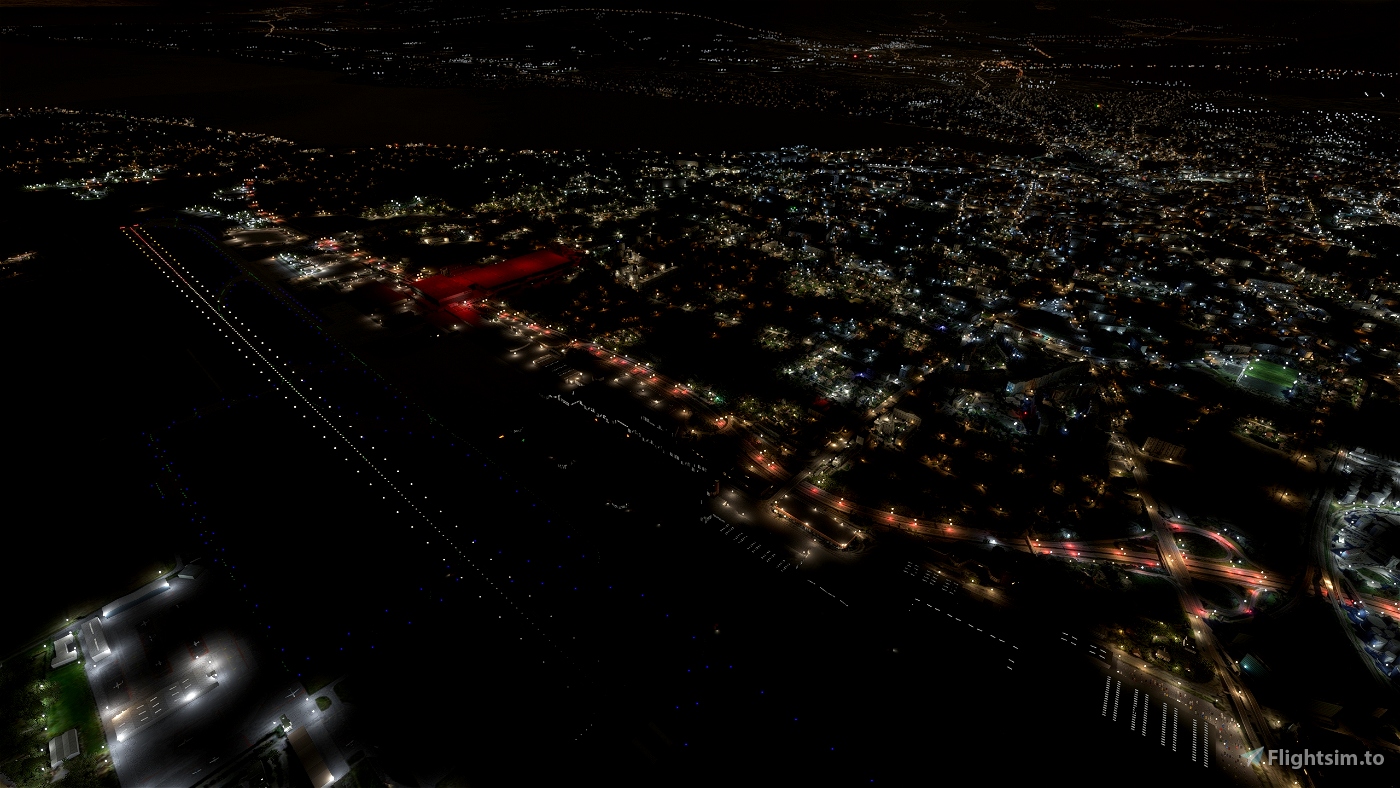 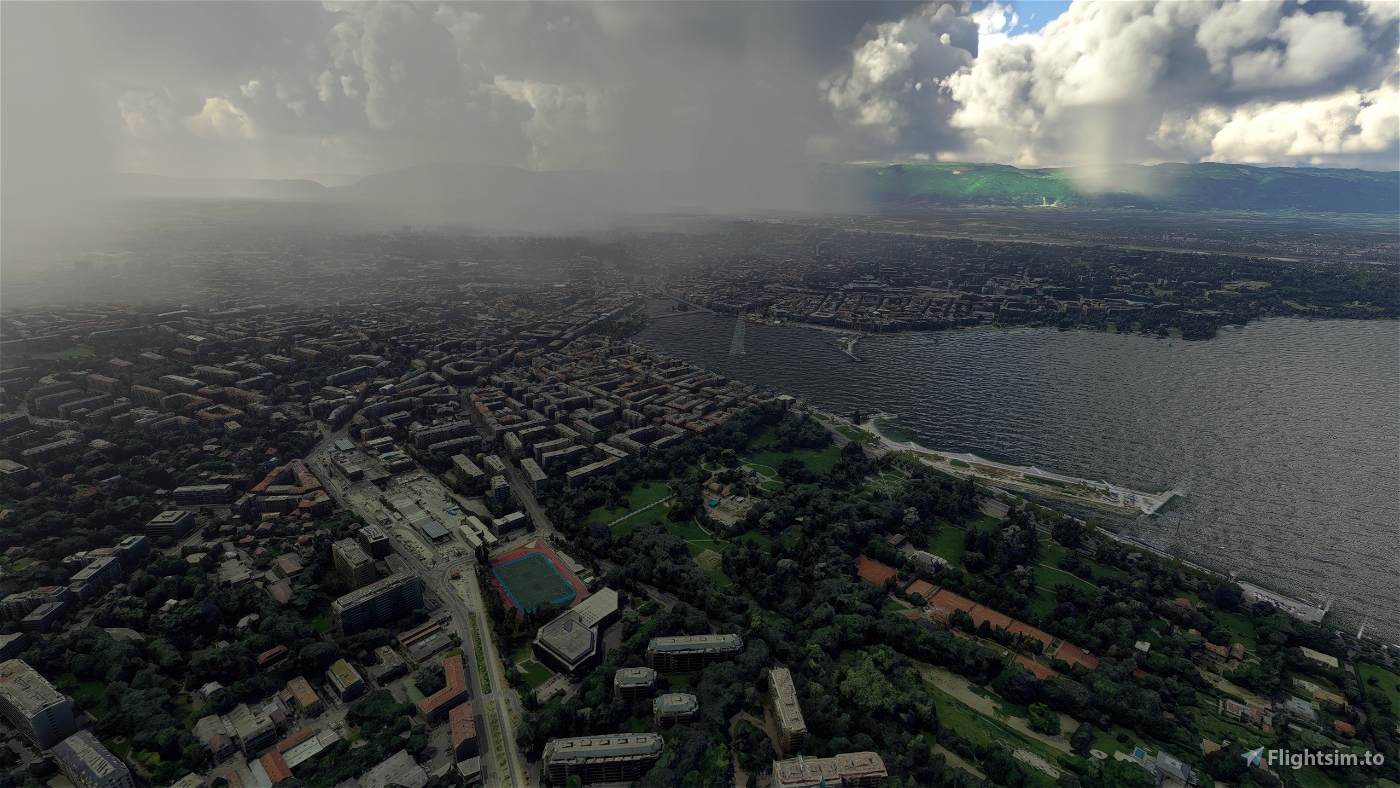 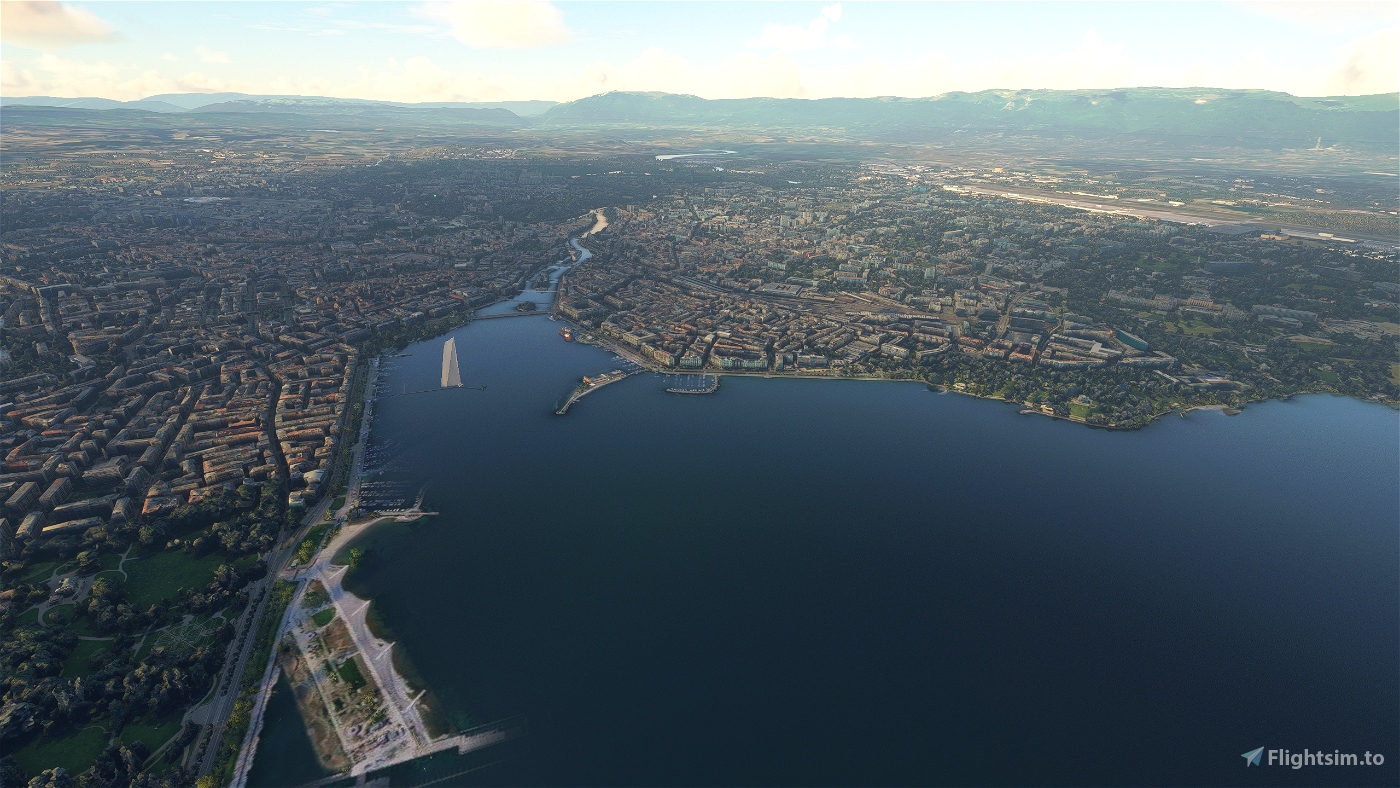 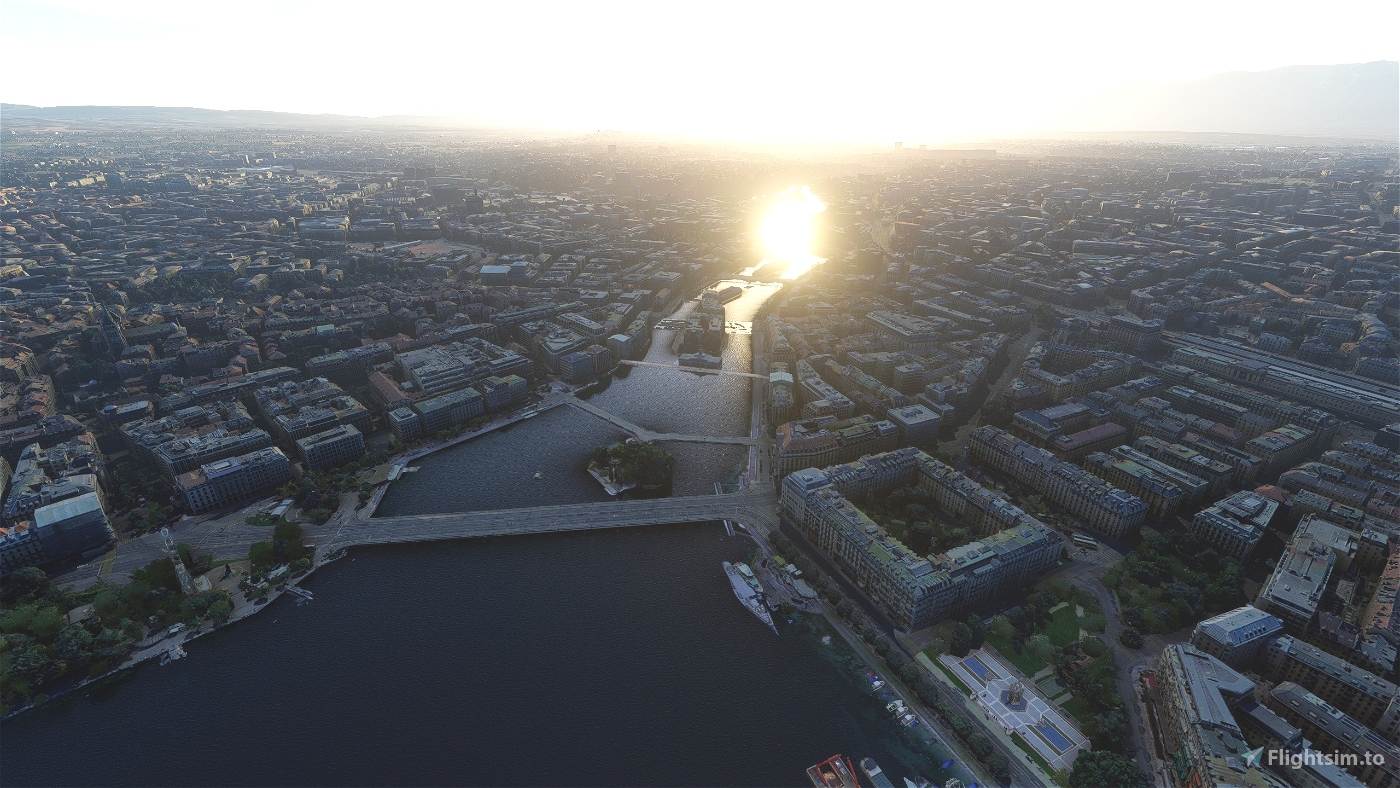 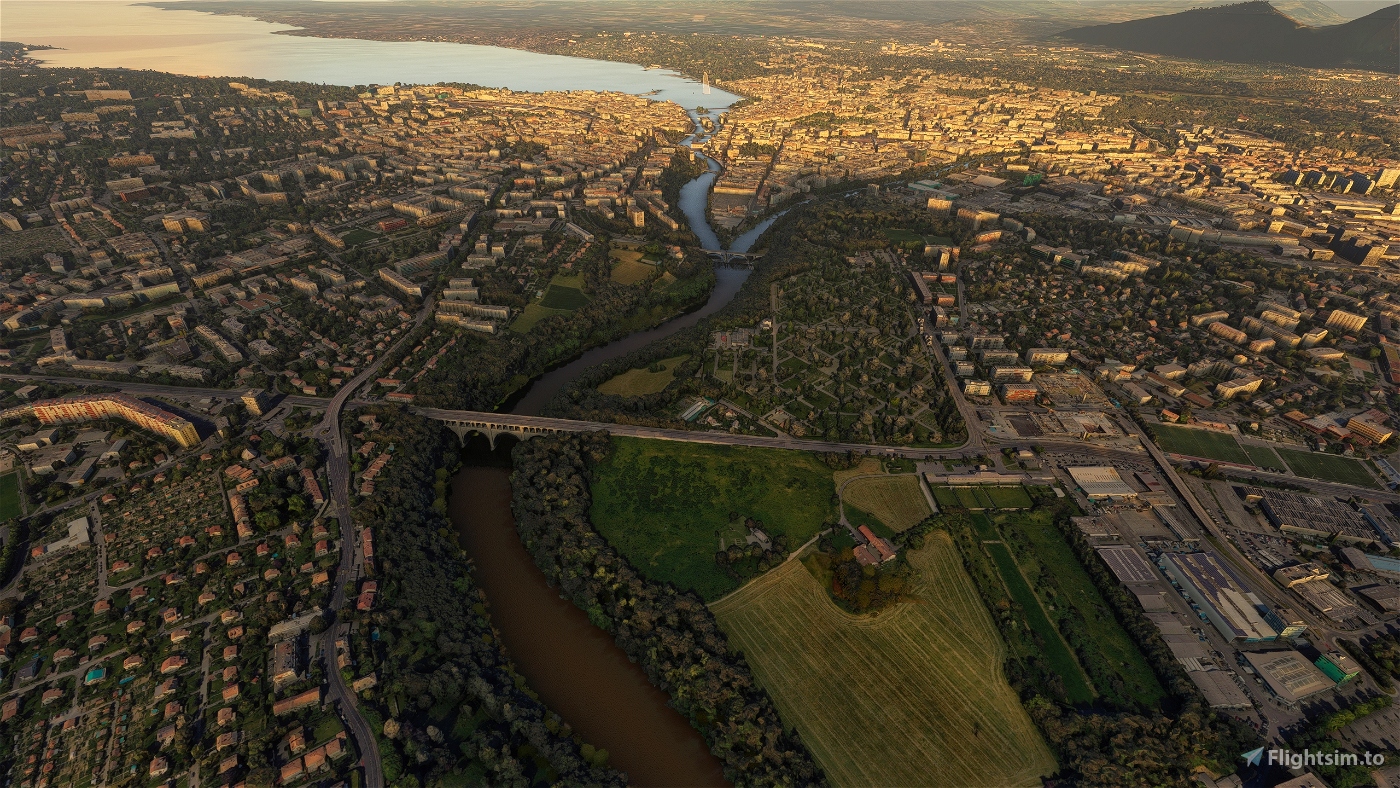 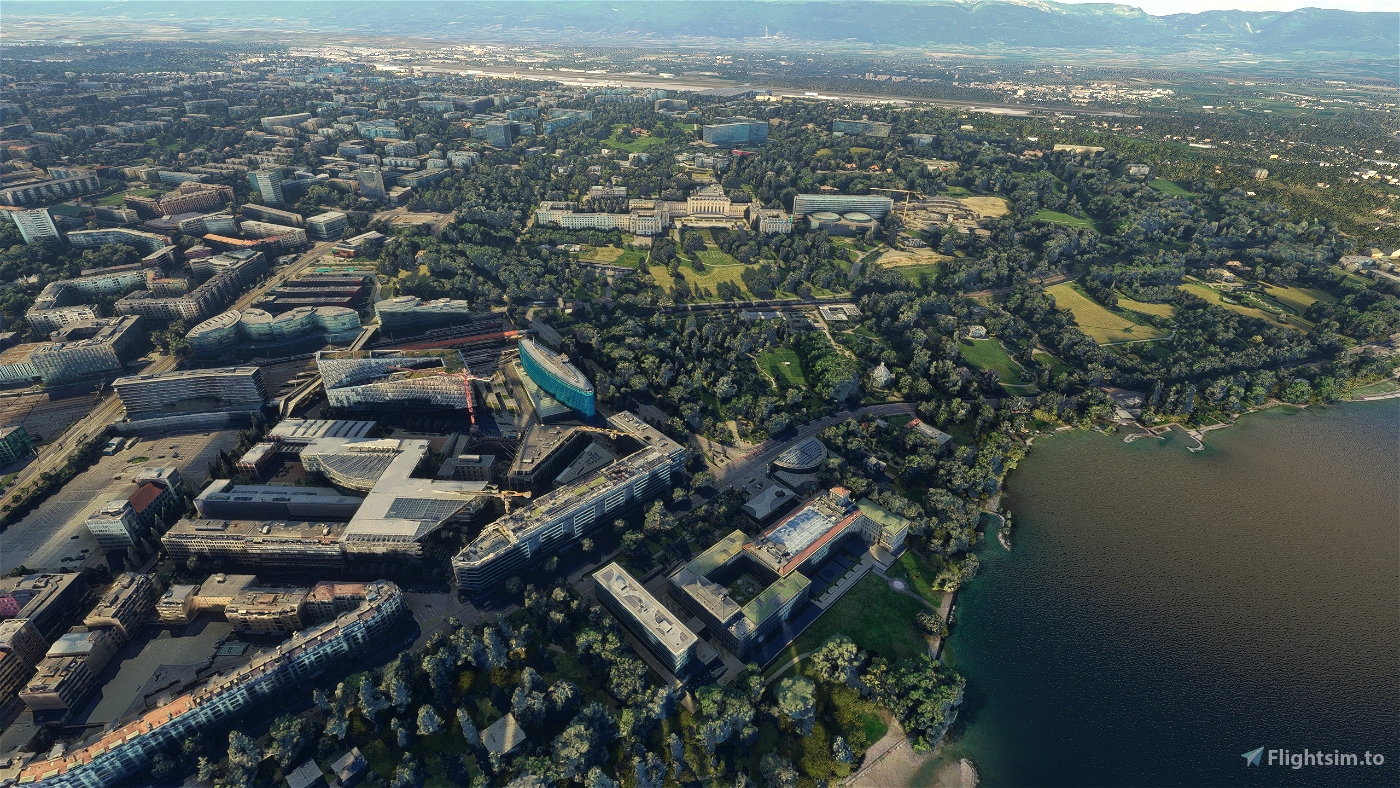 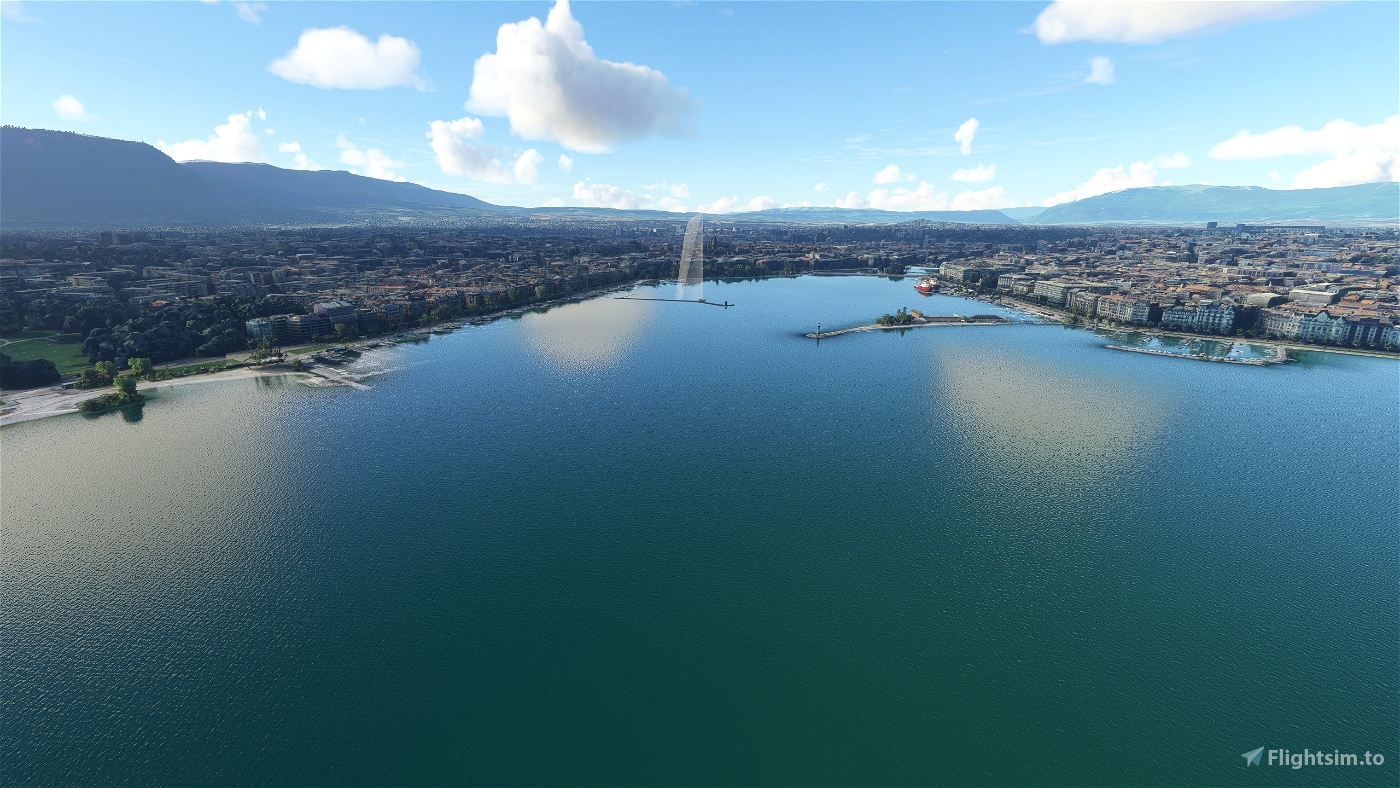 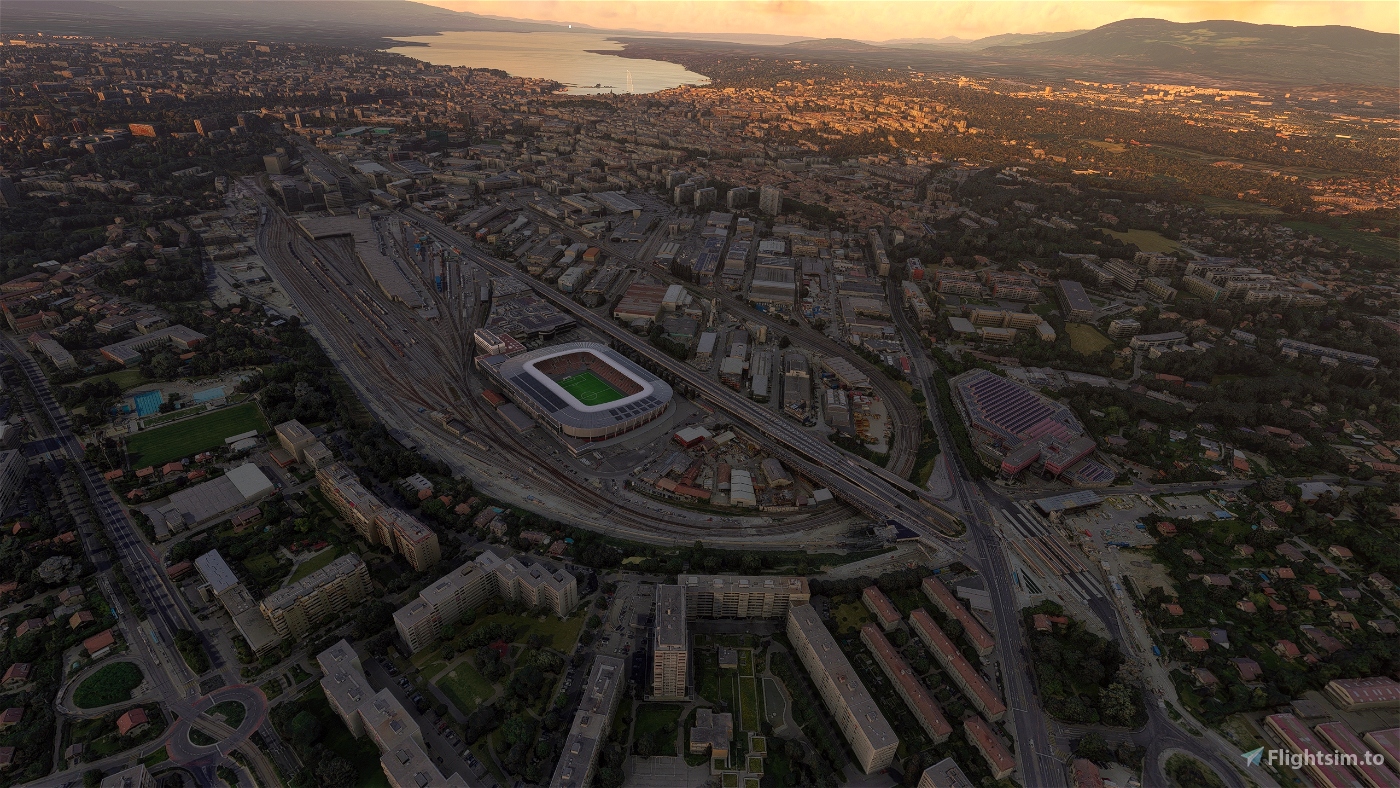 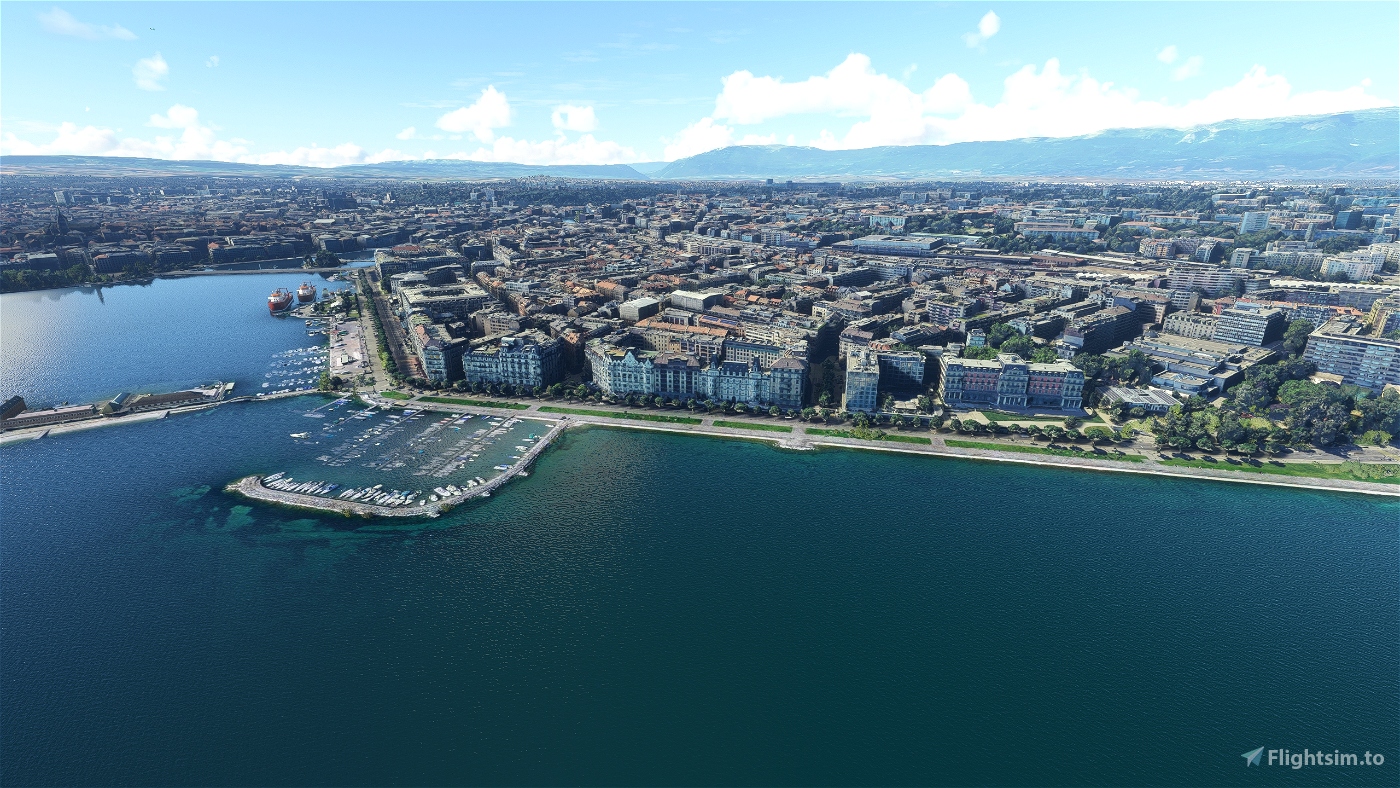 Compatibility with Sim Update 5 has been confirmed.

Important ! in order for this mod update to work properly, go to the Microsoft Flight Simulator Roaming folder in C:\Users\MYUSERNAME\AppData\Roaming\Microsoft Flight Simulator or C:\Users\MYUSERNAME\AppData\Local\Packages\MicrosoftFlightSimulator\Local Cache (depending on yout MSFS version - steam or MS Store), then remove the file named Content.xml.

The new update is compatible with the WU6 update, but you need to download the switzerland MS/Asobo handcrafted objects first.

Optional: If you own the RED WING HUG addon, use the second file (Geneva City - Red Wing HUG compatible version).

The municipality (ville de Genève) has a population (as of December 2019) of 203,951, and the canton (essentially the city and its inner-ring suburbs) has 504,128 residents. In 2014, the compact agglomération du Grand Genève had 946,000 inhabitants in 212 communities in both Switzerland and France. Within Swiss territory, the commuter area named "Métropole lémanique" contains a population of 1.26 million. This area is essentially spread east from Geneva towards the Riviera area (Vevey, Montreux) and north-east towards Yverdon-les-Bains, in the neighbouring canton of Vaud.

In 2017, Geneva was ranked as the world's fifteenth most important financial centre for competitiveness by the Global Financial Centres Index, fifth in Europe behind London, Zürich, Frankfurt and Luxembourg. In 2019, Geneva was ranked among the ten most liveable cities in the world by Mercer together with Zürich and Basel. The city has been referred to as the world's most compact metropolis and the "Peace Capital". In 2019, Mercer ranked Geneva as the thirteenth most expensive city in the world. In a UBS ranking of global cities in 2018, Geneva was ranked first for gross earnings, second most expensive, and fourth in purchasing power.

This scenery has been extracted from Google Maps, hence all 3D credits goes to Google.This scenery has been generated with the Google Earth Decoder tool (credits to /u/Jonahex111):https://www.reddit.com/r/FS2020Creation/comments/j3faaj/google_earth_decoder_now_userfriendly/
This scenery uses this colors light pack (credits to miguel88): https://flightsim.to/file/912/11-colors-lights-pack-from-blender-1-0

Thanks for the update 😊

You're welcome. But i will very soon upload another update (i have cleaned airport area from existing photogrammetry, and fix elevation issues nearby the airport). I also made a version compatible with the Red WING HUG scenery. I will also upload a new version of the Lausanne scenery that covers a bigger area (from Renens to Lutry)

I will be happy if you update Annecy area scenery with all the suburbs except the Meythet airport. Many thanks best regards 😊

my water jet is not white but magenta

do you have an idea,

thank you so much

my water jet is not white but magenta

do you have an idea,

thank you so much

No, i don't know what happens for you. Have you removed the Content.xml file prior to launch the sim, just after installing my addon ? Can you make a screenshot ? The water jet does not use a texture for the water, it is just a color linked with shader modifications on it, and specific transparency value.

Why the Content.xml deletion? What does it do?

When a new update is installed, its packages are placed at the end of the list of the Content.xml file, after the previously installed addons. But in order for the addon to take into account the update modifications, it has to be placed after the officlal packages. Removing the Content.xml file will reorder it at the next restart. This order is very important because it indicates the priority order of the packages. The more the package at the end of the list, the more its priority.

Thank you! I think you should add this short explaination to your files so people know what they're doing!

Maybe it is not necessary. In the SU6 changelog, i guess there is fix that should make the job, if i understand well. Will wait until the SU6 update to see if it fixes this behaviour.

Thank you verry much omg

Looks super nice, is it compatible with the redwing lsgg?

ANY IDEA?: 1.) There is no Jet d`Eau and that whole pier, where it should be, is missing. 2.) The Baine Bleu (situated north of the Jet d`Eau)is looking strange, 3.) I have got no idea, where to download the WU 6 / Switzerland Handcrafted Objects. - WU 6 is of course installed. - Regards Laszlo

1) The jet d'eau is part of this mod, and is not missing on my side. Can you make a screenshot ?

2) Maybe the Bain Bleu is too recent for Google Earth data ?

Yes, i know (bigger area, more detailed areas). But you can keep the old version if you prefer.

i ALSO DO NOT KNOW THE SOLUTION...

A beautiful scenery. Only issue i have experienced is the water level at the shore. Its a bit higher than the city level.

I haven't tried this yet -- are you saying the Jet d'eau is now included? I was really surprised that WU6 didn't include it in their Switzerland update. Can this be installed on top of it?

I did not test the WU6 on geneva. But i did not see a reference to it on the update log.

6 month(s) ago
Thanks a lot for your amazing work ! Do you think it is possible to extend a little bit the area ? Especially around the airport for a more immersive approach ? On Google Maps it's seems around LSGG (Meryrin, part of Ferney, Bellevue and Le Grand-Sacconnex) is in 3D too. Thanks !
0
0
Reply

No, i am not, since photogrammetry is not suitable for the airports. You have to make specific 3d models for them, as well as PBR textures.