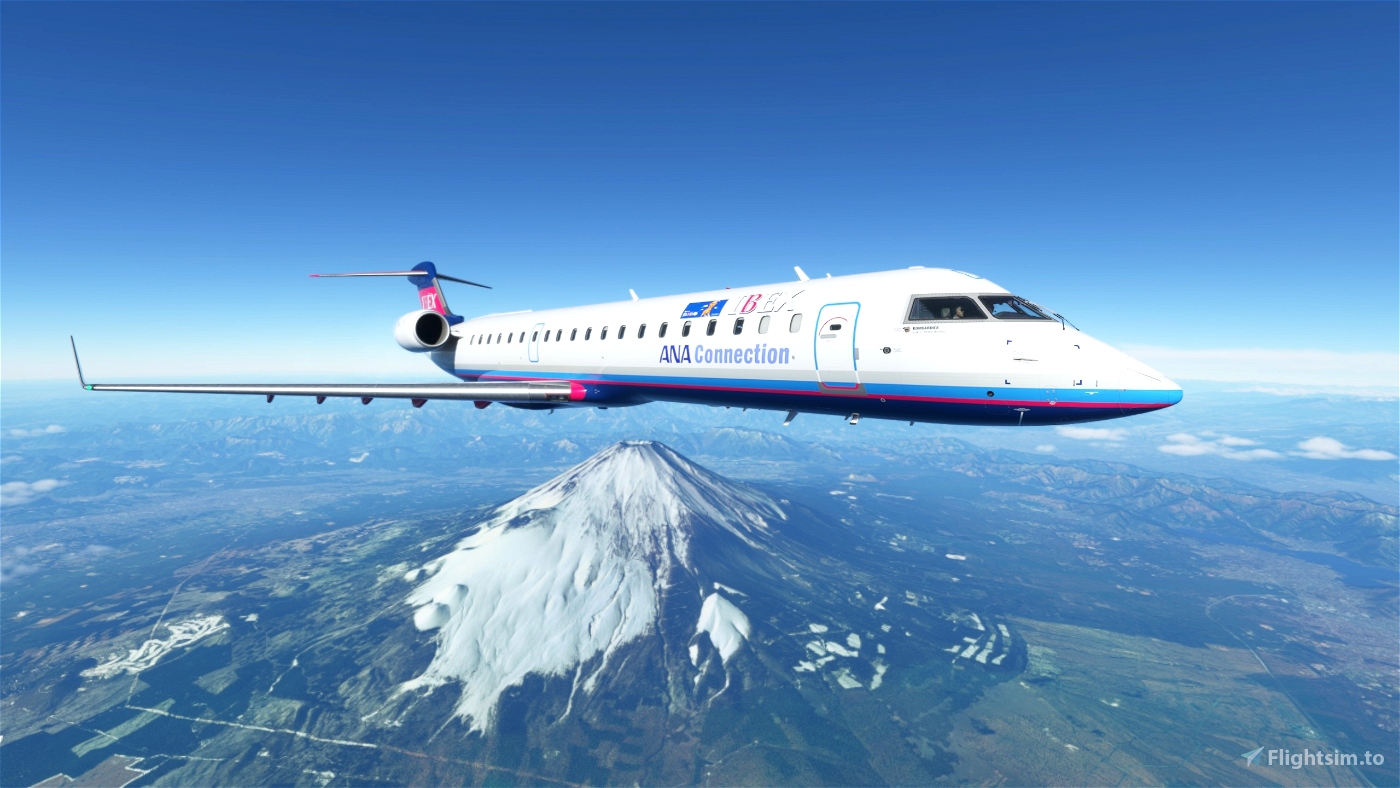 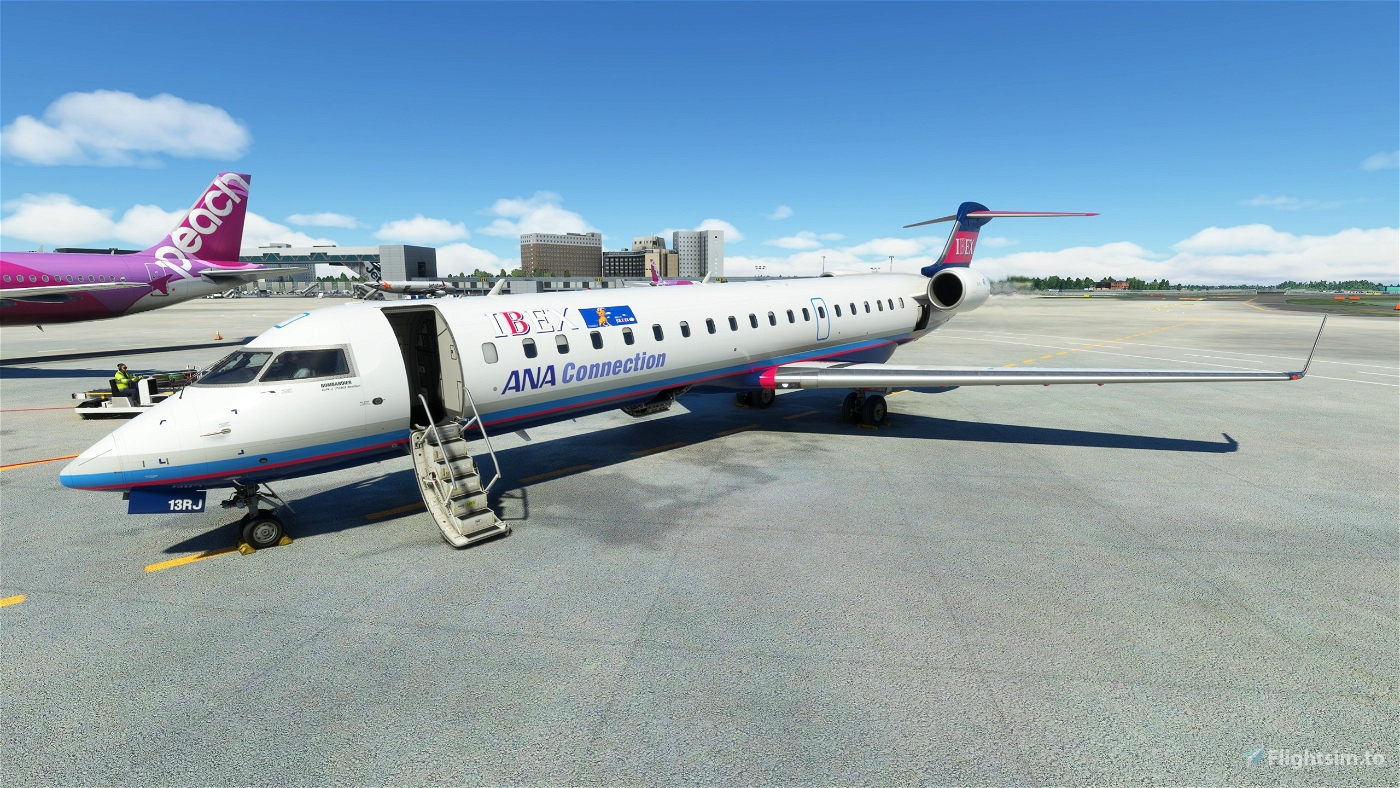 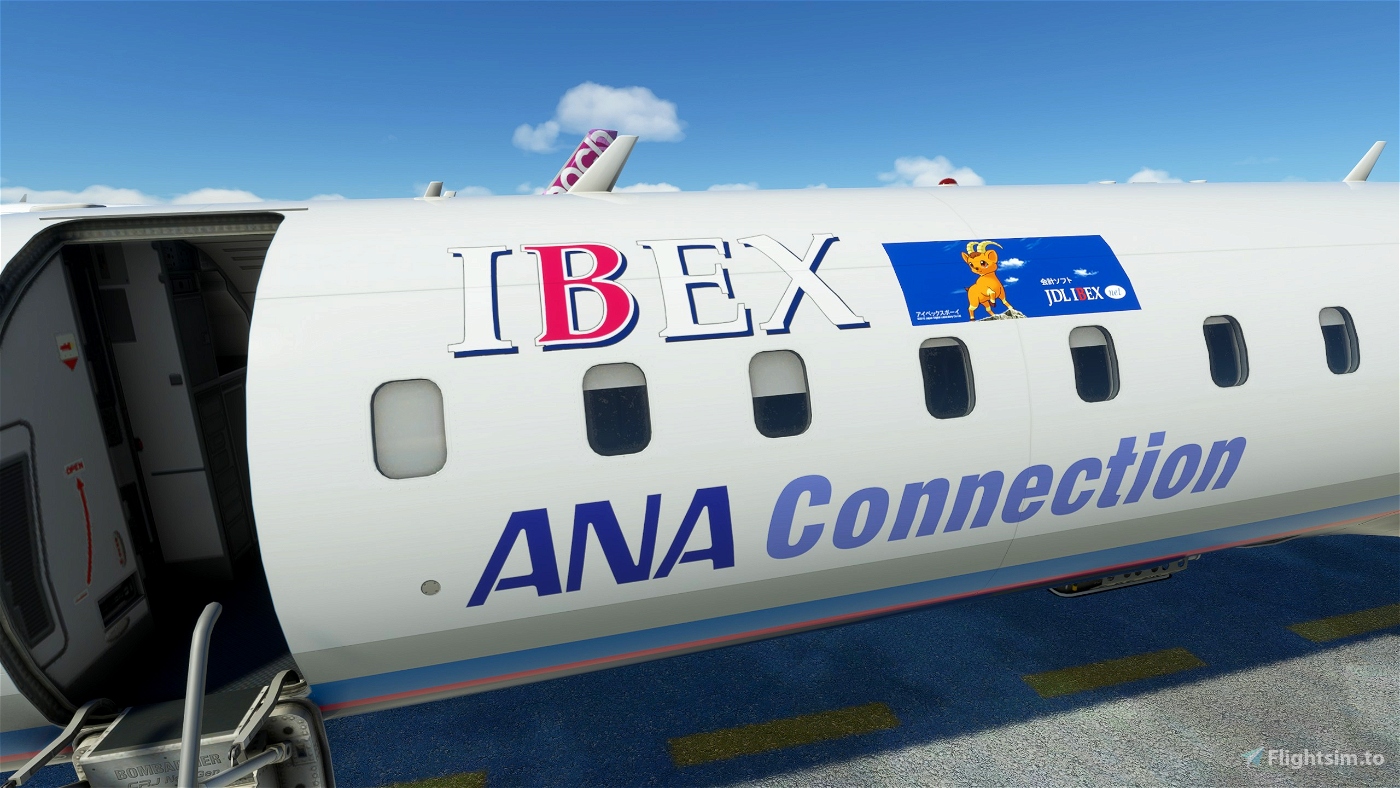 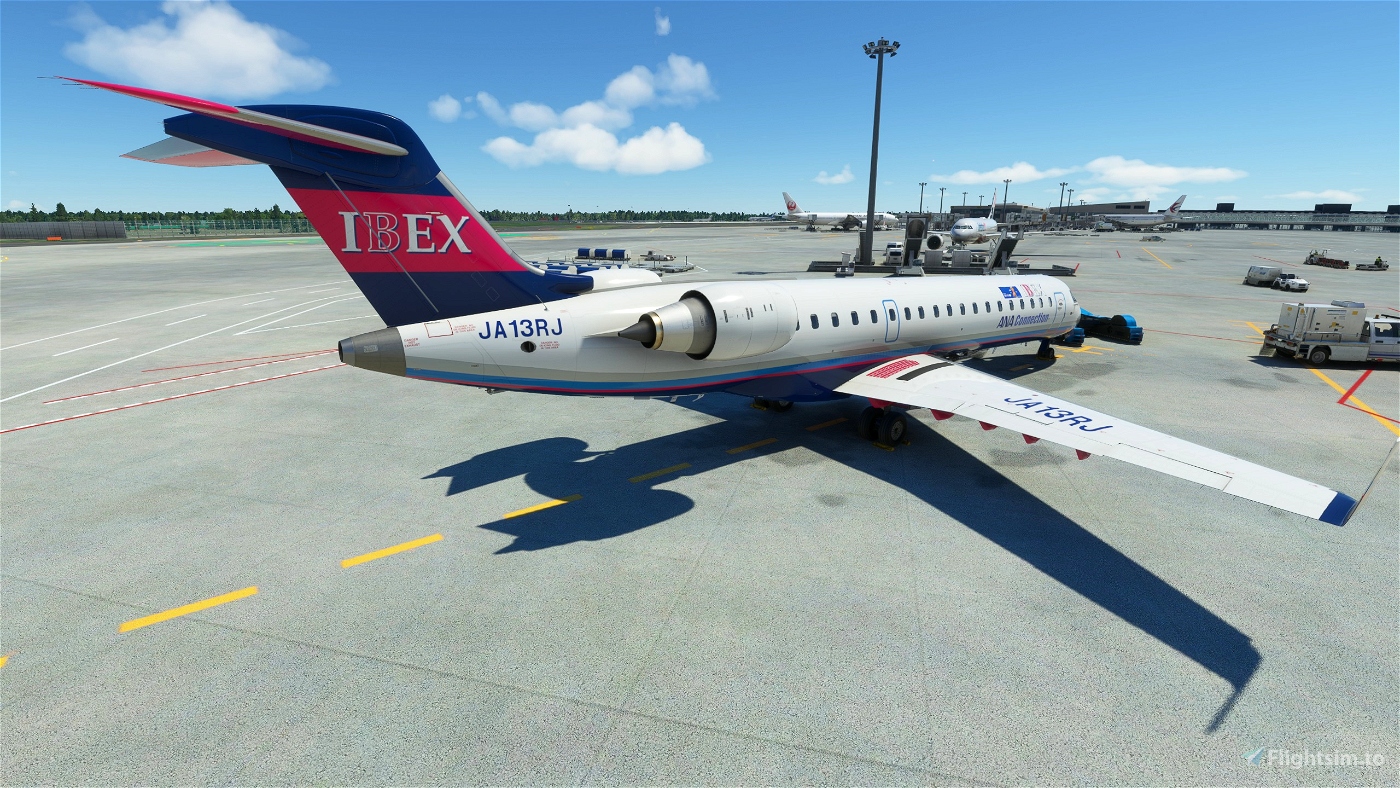 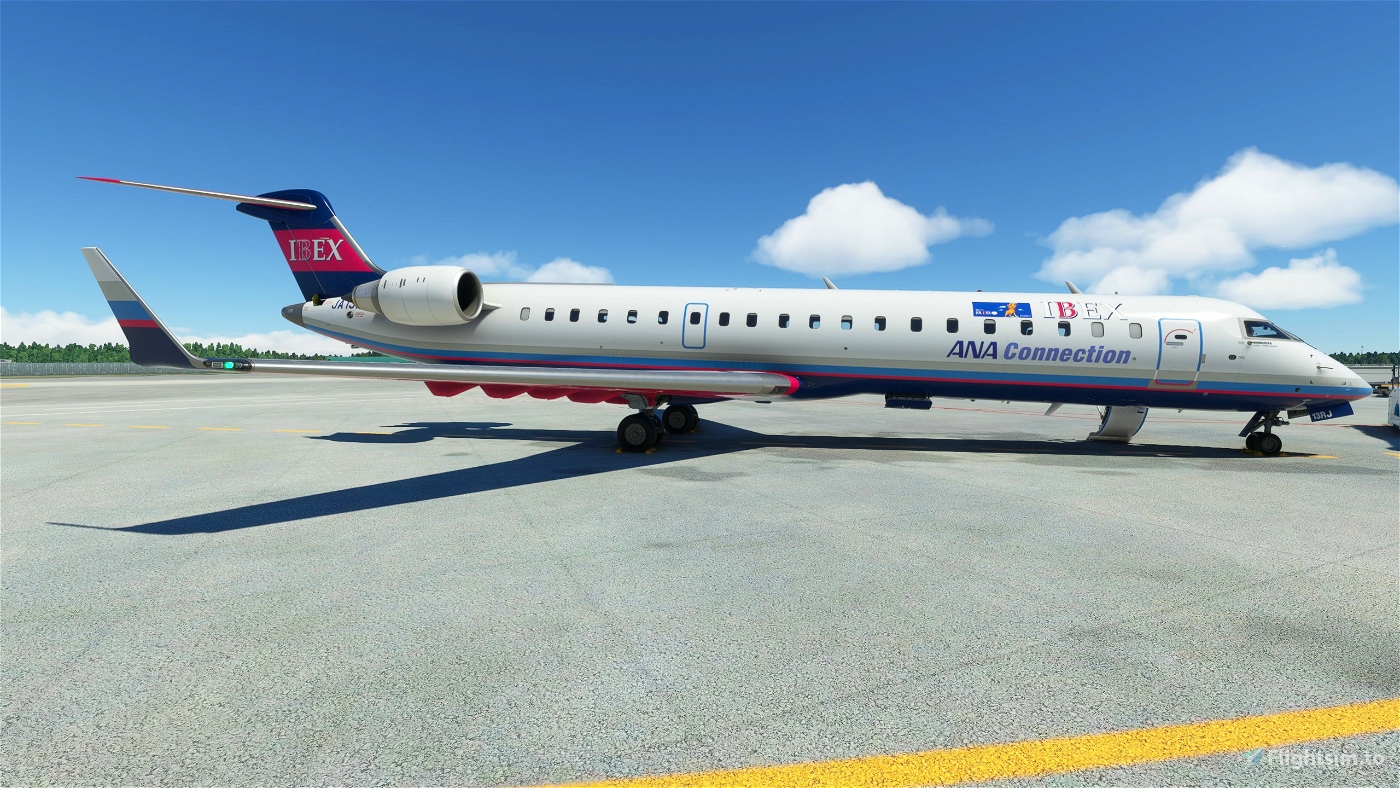 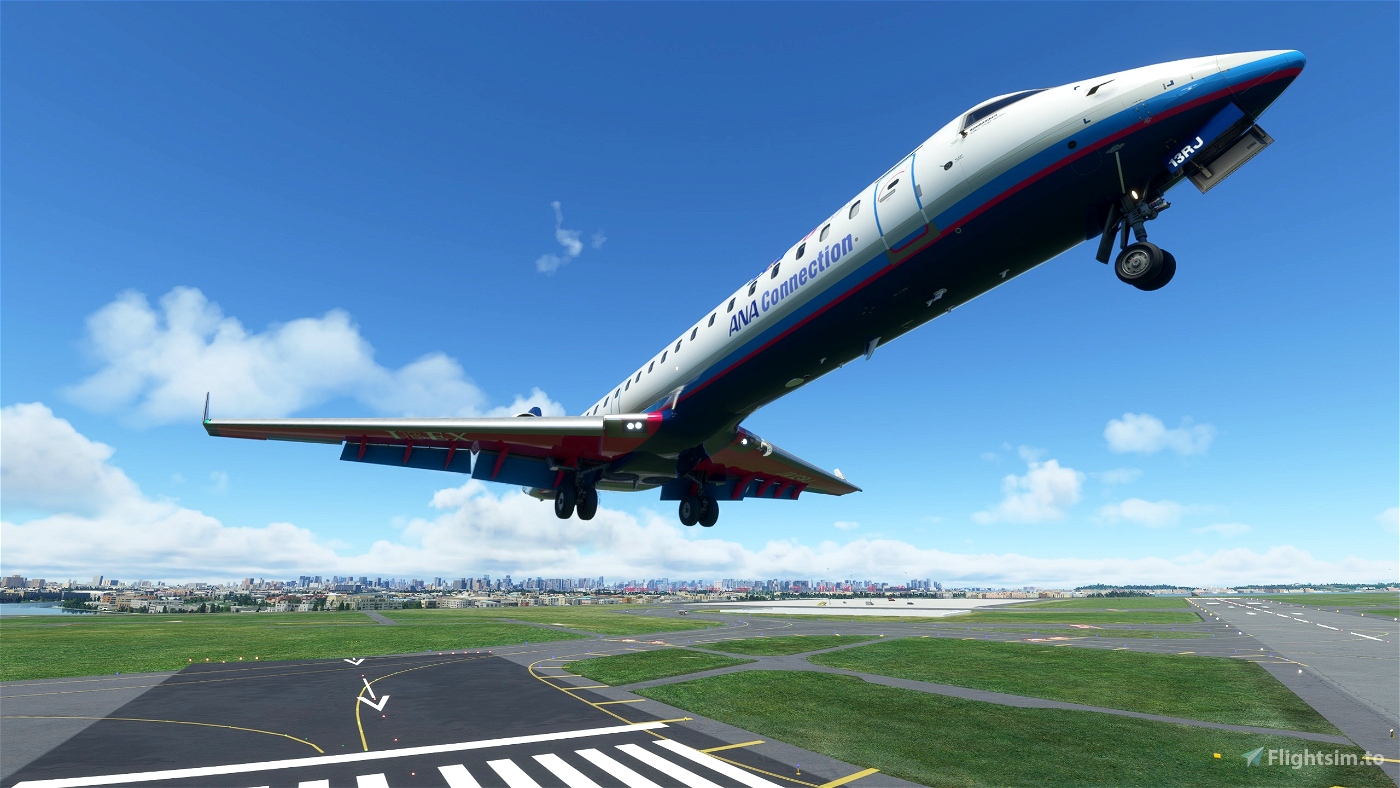 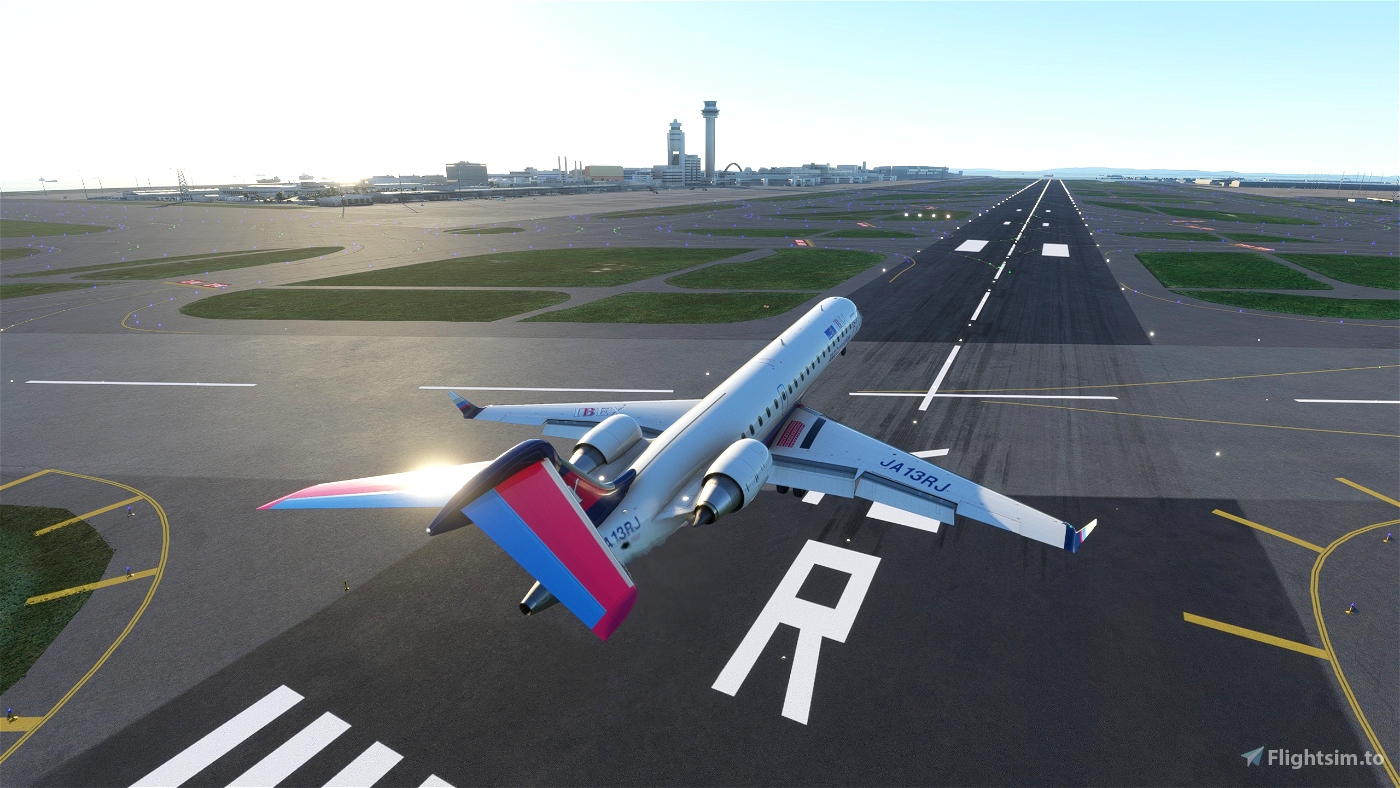 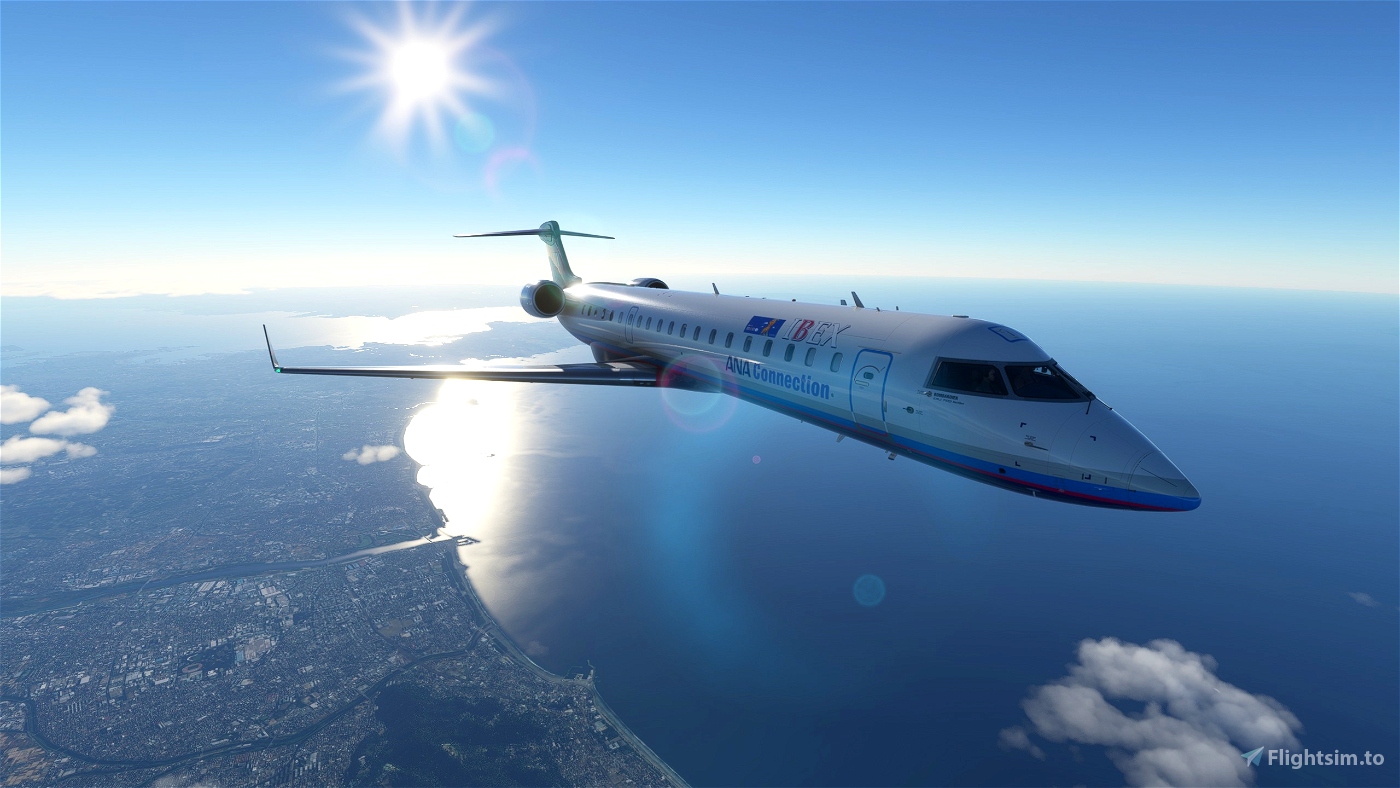 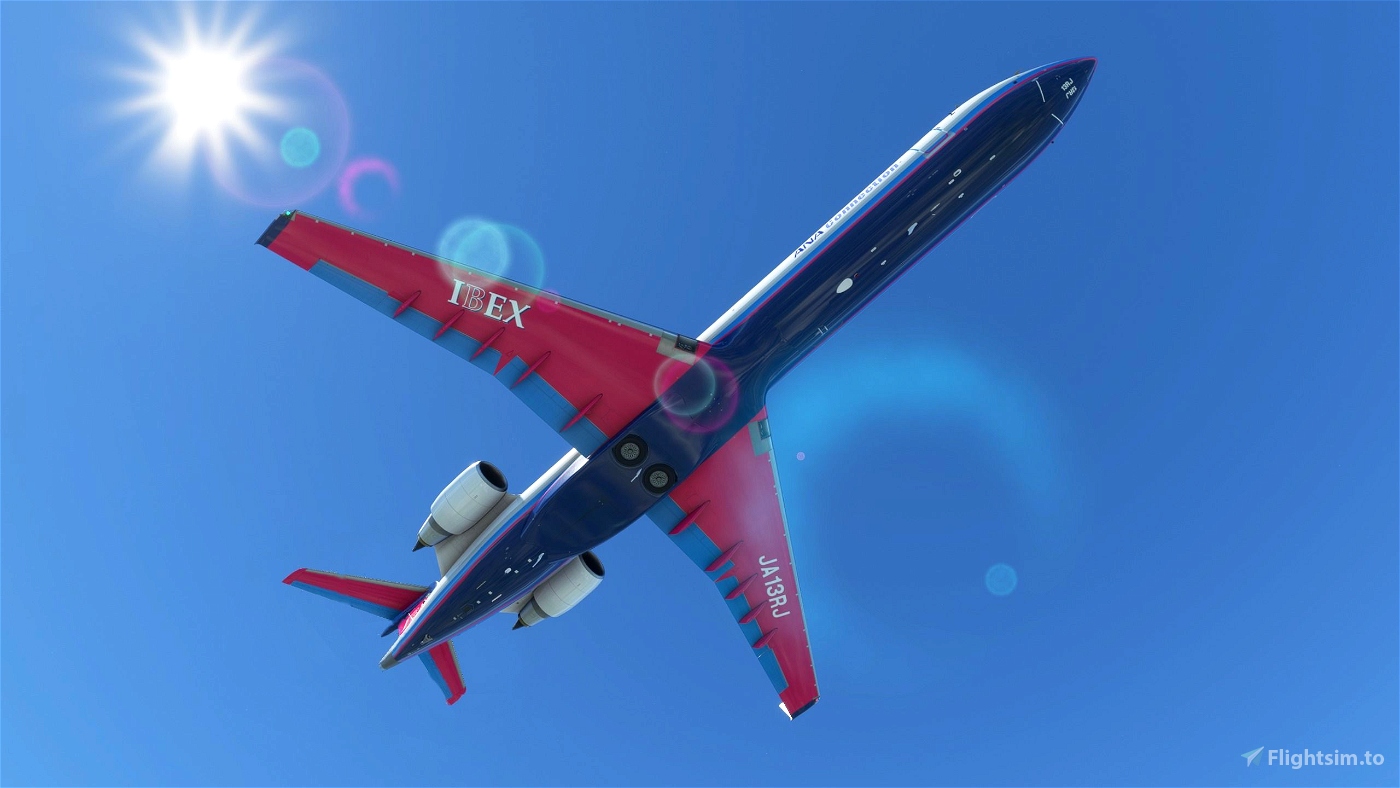 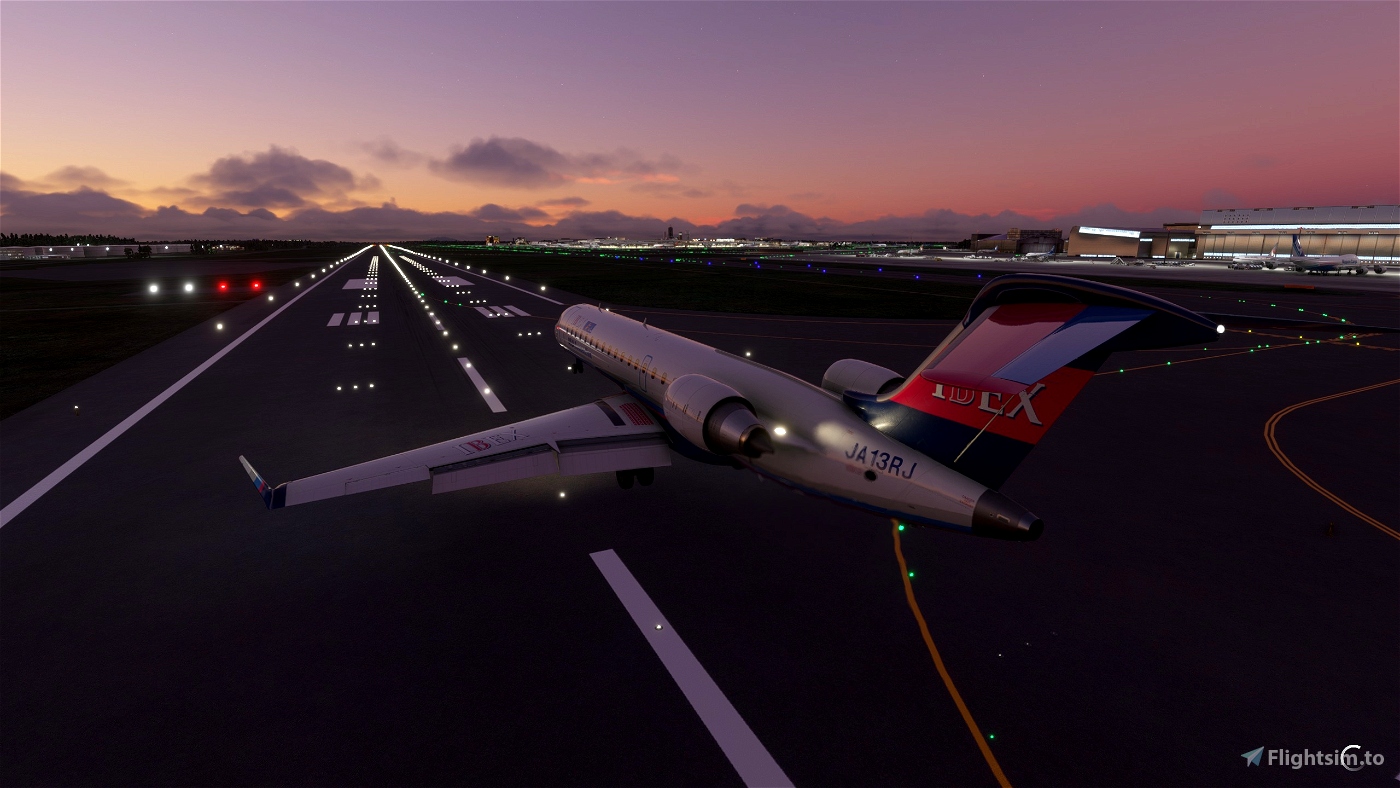 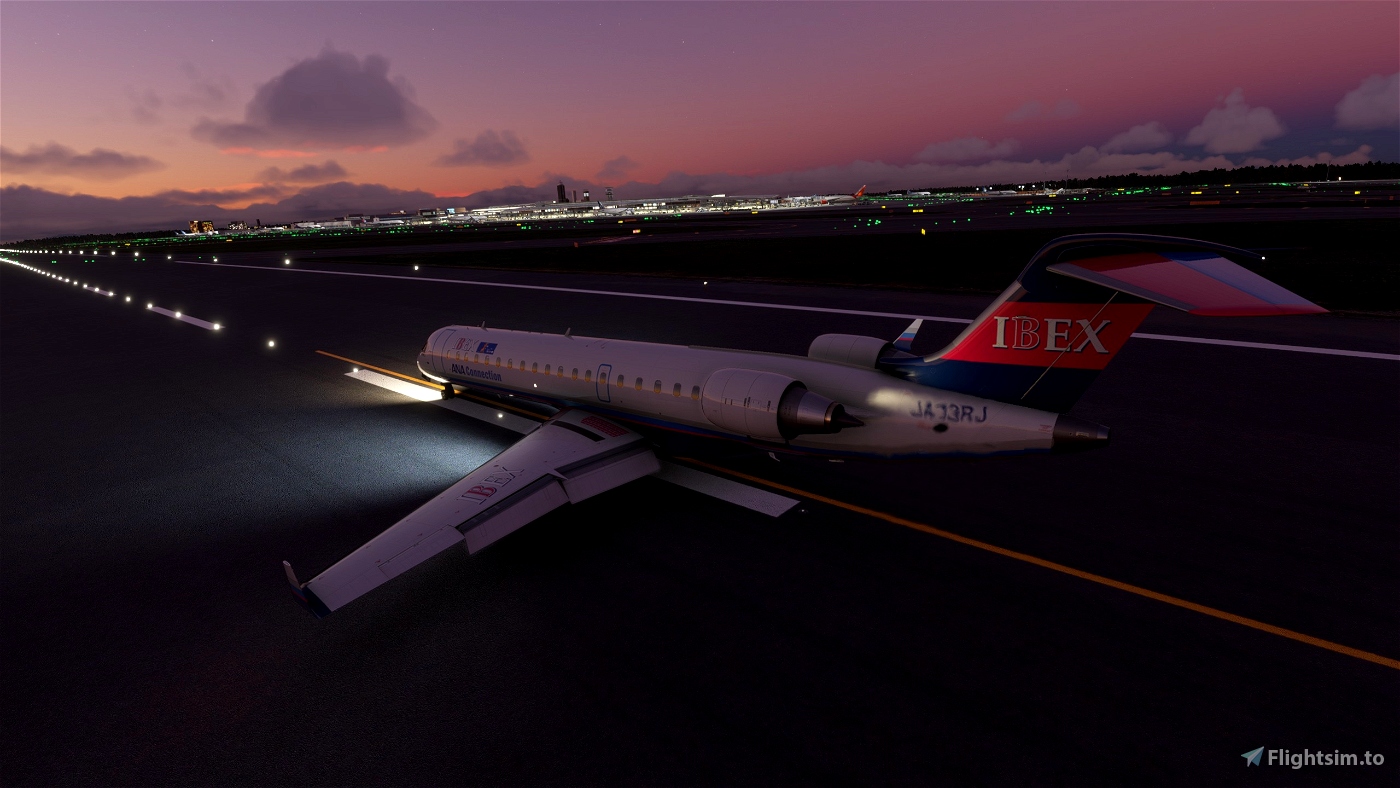 Compatibility with Sim Update 5 has been confirmed.

If you love flying over Japan and would like CRJ 700 by to look the part, this livery is for you. JA13RJ is a real aircraft belonging to IBEX Airlines, a subsidiary of All Nippon Airways and the only CRJ operator in the country.

While Aerosoft has now made its official version of the livery, it was still limited by the relatively low resolution of the base textures and was lacking a few details. That's why I decided to continue working on this version, implementing the new decal layout that enables asymmetrical markings on the wings and better details, and further improving the past version.

This isn't simply an upscale to 4K of Aerosoft's texture. It was made starting from the blank paint kit with native 4K assets for the best possible quality, while still retaining (IMHO) good performance.

It's important to mention that this isn't a knock on the work done by Aerosoft's texture artists. Not only their work on the new decal layout made this livery possible, but they did a great job within the constraints imposed by the resolution they worked with. This is simply one of my favorite liveries, so I decided it was worth making my own version.

If you enjoy my liveries (more are coming), the best way to support my work is to read my Microsoft Flight Simulator coverage on Twinfinite. Comments are also more than welcome.

We have dedicated daily news, developer interviews, add-on reviews, and more. Despite working on a general gaming website, I strive to offer competent coverage of the sim, and I'd really love to have more eyes of dedicated simmers on it.

It's worth mentioning that the author of this livery isn't associated in any way with IBEX Airlines. The intent of this livery is simply to provide an appropriate and realistic look for the aircraft when flying over Japan.

Simply unzip the folder in your community folder.

Here are more liveries and misc tweaks of mine you can download:

Liveries in this category require additional payware. You can buy the Aerosoft Aircraft CRJ 550/700 from Aerosoft or in-game marketplace.
This file has been scanned for viruses and is safe to download.

These users have donated to AbriaelDS to keep him making awesome add-ons everyone can enjoy.

Is it just me or when I try to use it, it crashes?

It works for me, I really wouldn't know what could cause a crash to be honest.

6 month(s) ago
My favorite livery for the CRJ. Nice work!
0
0
Reply

Thanks for the kind words! 😀

You're very welcome, I'm glad you enjoy it 😀

6 month(s) ago
Great livery! I'm really looking forward to the update when the official paint kit comes out. Thank you so much for this.
0
0
Reply

Glad you liked it. It should be soon 😊