The island of Saint Lucia is located in the Caribbean, South of Martinique and North of Saint Vincent and the Grenadines and is part of the Winward islands. Hewanorra International Airport (TLPL), located near Vieux Fort Quarter, Saint Lucia, is the larger of Saint Lucia's... 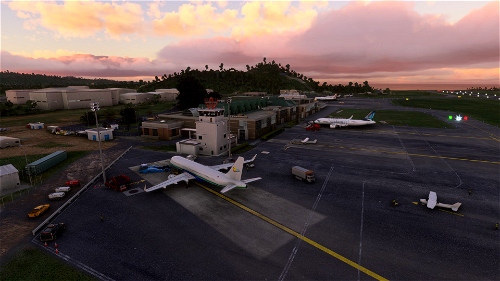 [UPDATED AS NEW INFO IS DISCOVERED]

In order to see the static Airbus Helicopter in the Helicopter parking, download it from HypePerformanceGroup's page https://flightsim.to/file/8970/airbus-h135-helicopter-project and check out their discord at  https://discord.gg/dUNDGb2Z7c

Those guys are awesome at what they do!

While doing this project, a payware version was released by FSDG. I think they did both airports as well. At the time i'd already completed about 75% of both airports, so I kept going with it. Check it out at Aerosofts website.

The island of Saint Lucia is located in the Caribbean, South of Martinique and North of Saint Vincent and the Grenadines and is part of the Winward islands. Hewanorra International Airport (TLPL), located near Vieux Fort Quarter, Saint Lucia, is the larger of Saint Lucia's two airports and is managed by the Saint Lucia Air and Seaports Authority (SLASPA). It is on the southern cape of the island, about 53.4 km (33.2 mi) from the capital city, Castries.

The airport can accommodate Boeing 747, Airbus A330, Airbus A340, Boeing 777, and other long-range intercontinental aircraft.

Open and extract ''lexpro-St Lucia_updated_scenery_pack_project_v1.0'' (or the version name you choose to download) to your prefered location on your PC, then unZip and open the folder and copy both "George_F_L_Charles_Airport_Updated_Scenery_Project" and "Hewanorra_International_Airport_Updated_Scenery_Project" folders into where your Community folder is located, then start the sim and go to TLPL-Hewanorra International or TLPC-George F. L. Charles Airport. That's it!

Do you enjoy this submission?
Your donation to support the creator is appreciated!
This file has been scanned for viruses and is safe to download.
More Uploads by lexuz2020

Asset Use Permission
You are allowed to use assets of my file, but you must properly credit me and my original work.

Create a free account now to be able to to keep track of your mods and their latest updates without struggle.
Dependencies

Show your gratitude by making a donation. This mod was brought to you by lexuz2020. You may donate if you like.

Exceptional work! Thanks so much.

Shortly. Small one though. Was working on other stuff at the time.

To me this looks better than the payware

This is awesome! I'm from Saint Lucia and the FSDG buildings are way more accurate in design. But yours seems a lot more detailed, with the surrounding roads, the car park at TLPL and so on.

If the two sceneries could be used together it would be perfect!

Thank you man. Yea I usually try to focus on every detail of an airport as I possibly can. Sometimes I have to dial it back so there are no CTD lol.

Yes, combining our works would be cool 😊

Thank you so much for sharing this amazing scenery here with us. This is much appreciated. Greetings from Berlin/Germany

You are welcome and thanks! Greetings from in the Caribbean, the island of Saint Kitts. 😊

Absolutely stunning! You have no idea how appreciated these efforts are. For so long the Caribbean has been neglected by the sims and the addon developers. People like you are making the dreams of so many of us of flying in this stunning region a reality. I cannot thank you enough!

PS Yours is definitely better than the payware!

Thank you man! Glad I did of some service to the sim world. To be honest that was my goal going into this as I too wanted to enjoy the Caribbean the way it was meant to be enjoyed in the sim and I couldnt wait for any paywares to come out at the time. I'm so glad Asobo implemented the Developer mode in MSFS otherwise I wouldn't be communicating with you today lol. Thanks a lot and much appreciated! 😀

Lovely!! absolutely impressive. can you include the lighthouse on the hill at TLPL in a future update?

Thanks bro. Also thank you for telling me about the lighthouse. With all the videos and pics i've been looking at to get this scenery close accurate, I never really saw a lighthouse lol. I will definitely include it in the next update. 😊

So some bad news bro, Since the latest update i'm getting random CTD when reloading scenery in Dev mode, also one or two menus in Dev mode are acting glitchy. So getting that lighthouse request may be delayed until I sort this out.

Some of the scenery objects have either changed position/orientation or changed completely. (The large fuel tanks I had in TLPL have changed completely. I had to re-position them.) ....but this is in Dev mode and not actual loaded scenery because community folder is empty, No AI, no multiplayer and hotfix was downloaded, so I don't know what's going. Going to try my other sceneries to see if the same thing happens. Also will try doing a new scenery project test and see if its just the old Dev mode set up is different from this update. Probably's a good thing I released this mod a day before the update .....lol.....smh....

ohh okay. no problem bro that can wait. sometimes the updates break too much

Yeah definitely broken....right now from some testing I've done so far and putting back all my mods in my community folder since the hotfix, the sim works fine without CTDs when no AI, no multiplayer and no satellite filter for world map. However, at night flights, all lights are glitchy, random stutters when looking around in cockpit (which can get real annoying in larger airports), some aircrafts are broken and other little things i've noticed that for me don't make me feel the excitement I used to feel before the update (if that makes sense). So i'm really taking a break from this sim till the next update. The loading times are awesome I must say.

Sweet. I'll check it out this weekend

I'm really impressed by your TLPL and TLPC.Your TLPL is closer, in my memory(We landed there for a stop from France enroute to TFFF with our DC10)to the real thing. I bought the FSDG renditions of both airports but I prefer yours! Well done

Wow....I don't know what to say about my freeware being preferred to than a payware version lol. Thanks for the nice words man. Much appreciated and i'm humbled! lol. Cheers! 😀