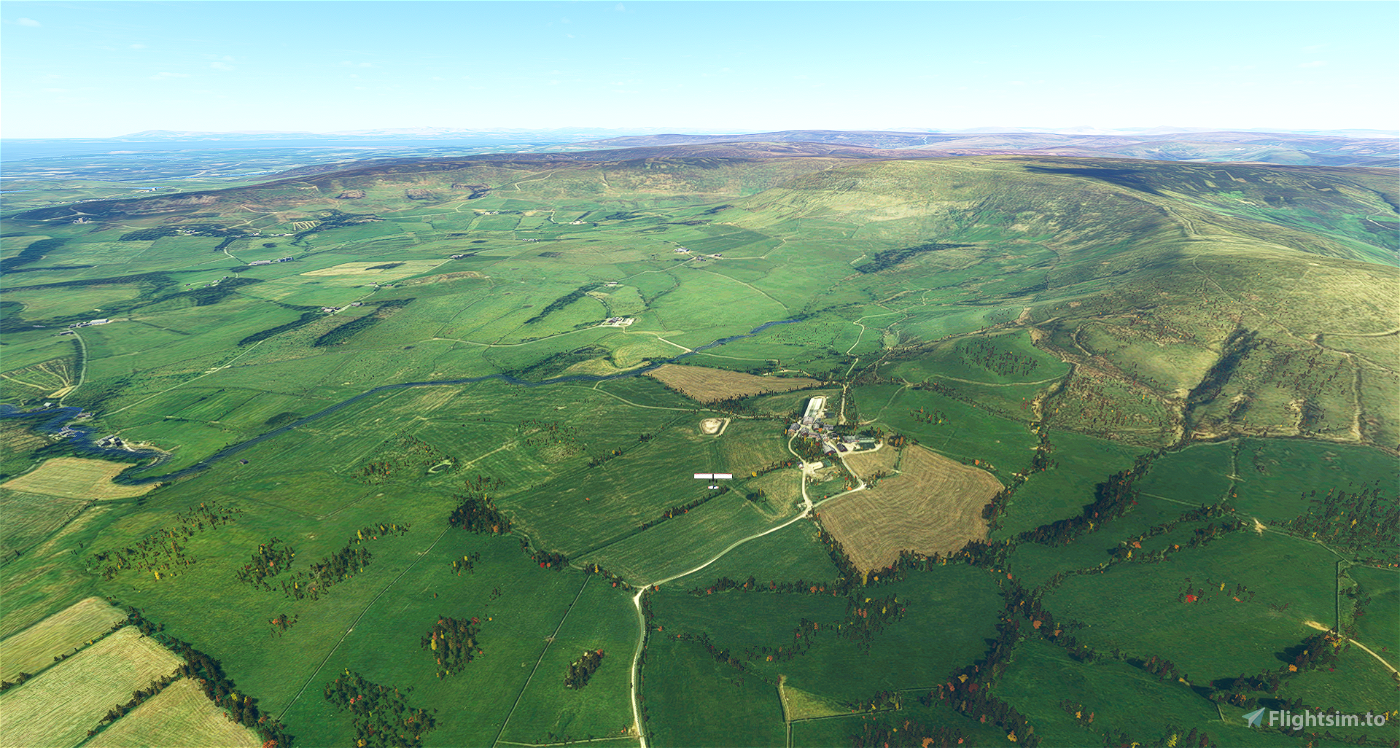 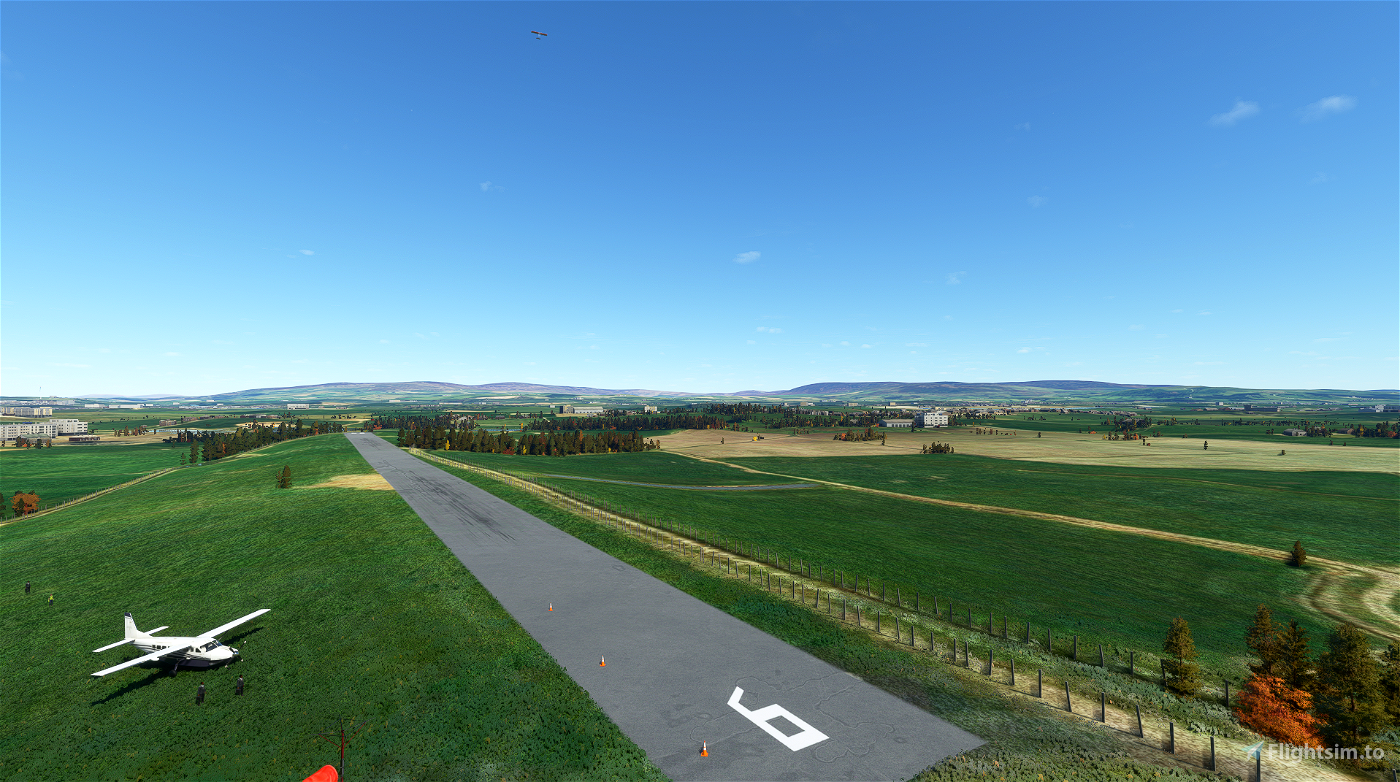 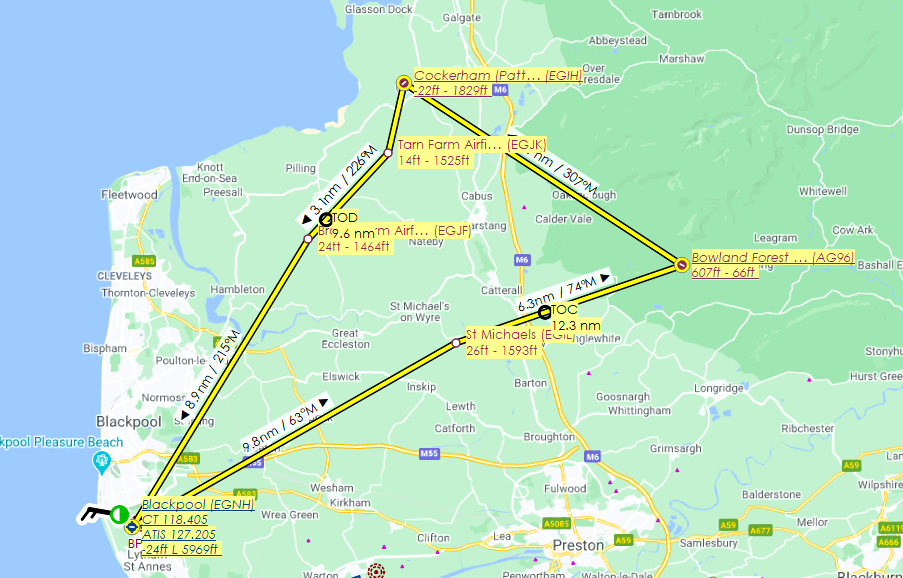 This route forms a triangle over an area of the western part of the English county of Lancashire called the Fylde. It is roughly a 13-mile-long (21 km), flat, square-shaped peninsula, bounded by Morecambe Bay to the north, the Ribble estuary to the south, the Irish sea to the west, and the foot of the Bowland hills to the east.

The most populous town in the Fylde is the seaside town of Blackpool, which is our departure airport (EGNH). (Consider installing the Blackpool landmarks add-on. Having Blackpool Tower on the horizon for most of the route markedly improves the realism.)

If you have the first edition of Neil Birch’s farm strip megapacks, this route has five options for landing before we return to Blackpool; if you’re using default scenery, you’ll have three options (Neil has made the real-life additions of Bowland Forest Gliding Club and Cockerham Airfield (EGIH; also known as Patty’s Farm), home of the Black Knights Parachute Centre).

The route is 39 nautical miles. I’ve included the flight plan in both MSFS (.pln) and Little Navmap (.lnmpln) formats.

From Blackpool, we fly ten nautical miles northeast to the village of St Michael’s on Wyre. Its airfield (EGIL) has three runways to choose from (visible in one of the screenshots attached). (Another optional add-on, We Love VFR region 1, features the locally-well-known masts at Inskip.)

Departing St Michael’s, we continue northeast for 6 nm, crossing the M6 motorway at Brock, to the foothills of the Forest of Bowland. This is the highest point of the flight, at 600 ft (180 m). The gliding club, near Chipping, is located between Beacon Fell and Parlick.

Heading northwest, we fly back over the M6, at Scorton, and on to Cockerham.

Turning back towards Blackpool, with the Cockerham salt marshes to our right, it is just 2 nm to the two-runway Tarn Farm Airfield (EGJK).

Brook Farm Airfield (EGJF) in Rawcliffe is next, after which we continue for 9 nm southwest over the River Wyre at Singleton and, eventually, the town of Blackpool itself, back to our origin airport.

Thank you. I fly this once a week or so on the sim. Never gets old.