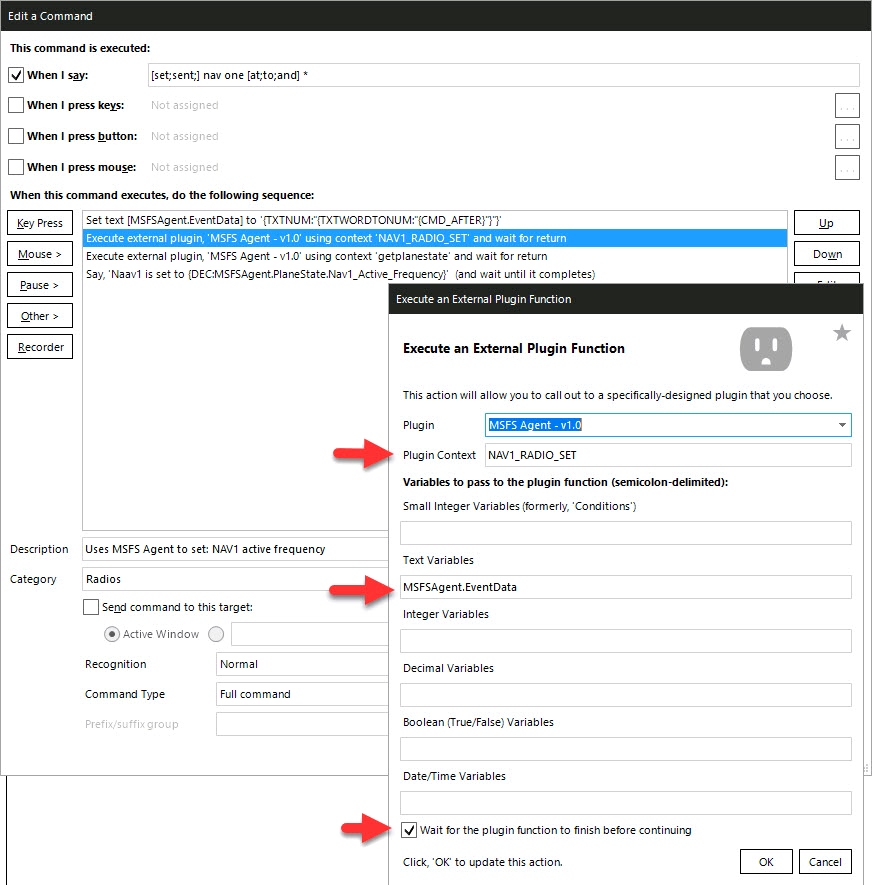 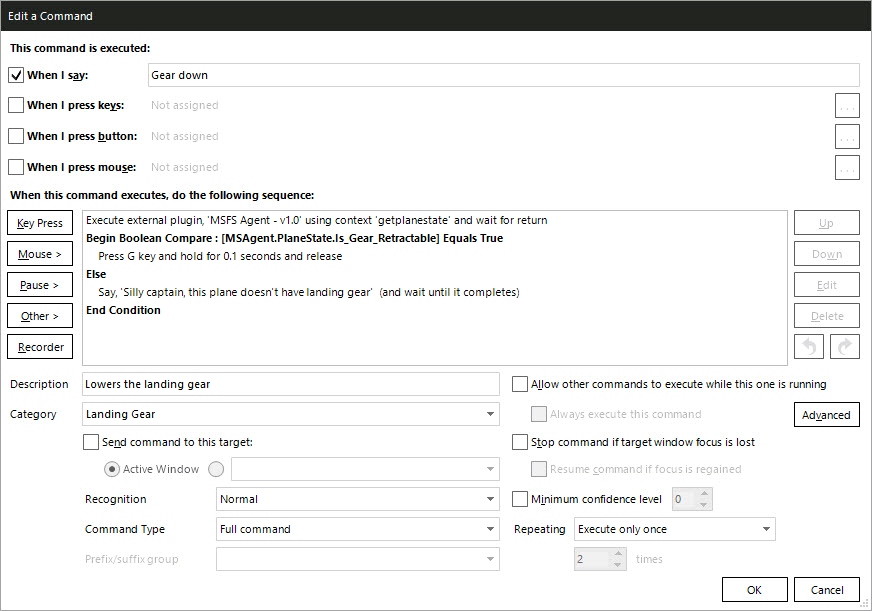 If you use Voice Attack to do voice control for MSFS, this free plug-in will give you the ability to trigger additional actions (i.e. set the radio frequency) in Microsoft Flight Simulator 2020 as well as get game state information back (i.e. status of landing gear).

Using the variables, you can do conditional logic (i.e. if "Sim_On_Ground" don't allow landing gear up, etc.) or include additional information in spoken text (i.e. if "Local_Time" is > 5pm say "Good evening" else "Good day").

My favorite is being able to say "Nav1 at 120.5" to set the radio without having to reach for the mouse or mess with the keyboard, especially in VR.

Who is this for?

Microsoft Flight Simulator 2020 users who want to use Voice Attack commands to control things they can't already do with keyboard commands (i.e. set a radio frequency). It's even more useful now that MSFS supports VR ????

In the zip file there is an example Voice Attack profile (.vap file) with commands for setting radios and using the variables. You can copy these commands into your existing profiles if you want or extend the example.

The detailed list of events and variables available + how to use them is maintained on the project's Github page:

Are you new or just getting started with Voice Attack?
I highly recommend checking out Virtual Voyagers Immersive Aviation video.  He has a profile you can download that has pretty much every voice command you can imagine for MSFS.  You can use my plugin and profile to extend his to cover the radios, etc.

VileIntent604 replied Author
February 15, 2021
Reply
Couple things to check:
1. Make sure you're running the 64-bit version of Voice Attack
2. Inside Voice Attach, go to settings, General tab, Plug-in Manager. See if there is an entry for MSFS Agent. If it's not there, it's related to #1 or re-check where the files were installed (needs to be sub-folder of the VA add-ons folder)

If it's still not working, let me know and we can debug.

You can also alter that command to how you'd like to do the command. Just open the command and change the "What I say" text at the very top. Leave the rest of the command as is.

I found Voice Attack had a hard time understanding when I say "Set" so I have the best luck for my voice using "Nav one at 119 point 6".

The voice attack manual has more instructions. A good tip is to go through the Windows Speech training so the recognizer can do a better job understanding you.
Scotty replied
January 11, 2021
Reply
Thank you,I will see what I can do.
VileIntent604 replied Author
January 04, 2021
Reply
Make sure you have the 64-bit version of Voice Attack. Since SimConnect from Microsoft is 64-bit only, the plugin has to be 64-bit and that means Voice Attack also has to be 64-bit.

To confirm which Voice Attack version you have installed, go to the Options UI (wrench icon). The window title should say "64-bit".

If you have that and it's still not working, make sure you've checked the "enabled plugins" option in Voice Attack (also on the General tab).

If neither solve the issue, let me know.
VileIntent604 replied Author
December 30, 2020
Reply
Looking through what the SimConnect makes available, I'm not seeing anything that give us access to what the ATC window is showing or saying. I don't we have the ability for this yet. Hopefully the MSFS SDK gets this one day.
gsdovah replied
January 02, 2021
Reply
Thank you for taking the time and checking this out :)
VileIntent604 replied Author
December 28, 2020
Reply
Yes, it's required because the software to communicate with MSFS (SimConnect) is only released for 64-bit. I've using the 64-bit Voice Attack Beta for a few weeks and have never had any issues so far (knock on wood)
VileIntent604 replied Author
December 27, 2020
Reply
Good call out. It's a general warning message that Voice Attack displays whenever the "enable plugins" option is turned on. It's not specific to my plugin, you'd get it for all Voice Attack plugins.