The scenery do not look like the pictures you posted. I loose something? Thanks anyway.

Hi..yep there is from gaffer simulations...but there towers don't have lights....made the towers on request ...gonna do the buildings in cbd and make one pack..regards!!

I haven't seen that before. I'll definitely investigate it. It might be difficult to find something that works. I'll put it on my list.

lol awesome, I love it

lol awesome, I love it

Can you do the area around KPTK?

I will try to correct all the errors that are both in the airport and the colors of the buildings that I add, it takes me a long time that I do not have now, but little by little it will be corrected

Hi, I am unable to download this livery! It comes with a single (.7z) file and should come as a compressed file could you please upload it again?

Current Version 2.0 by NikPrist
Previous Next 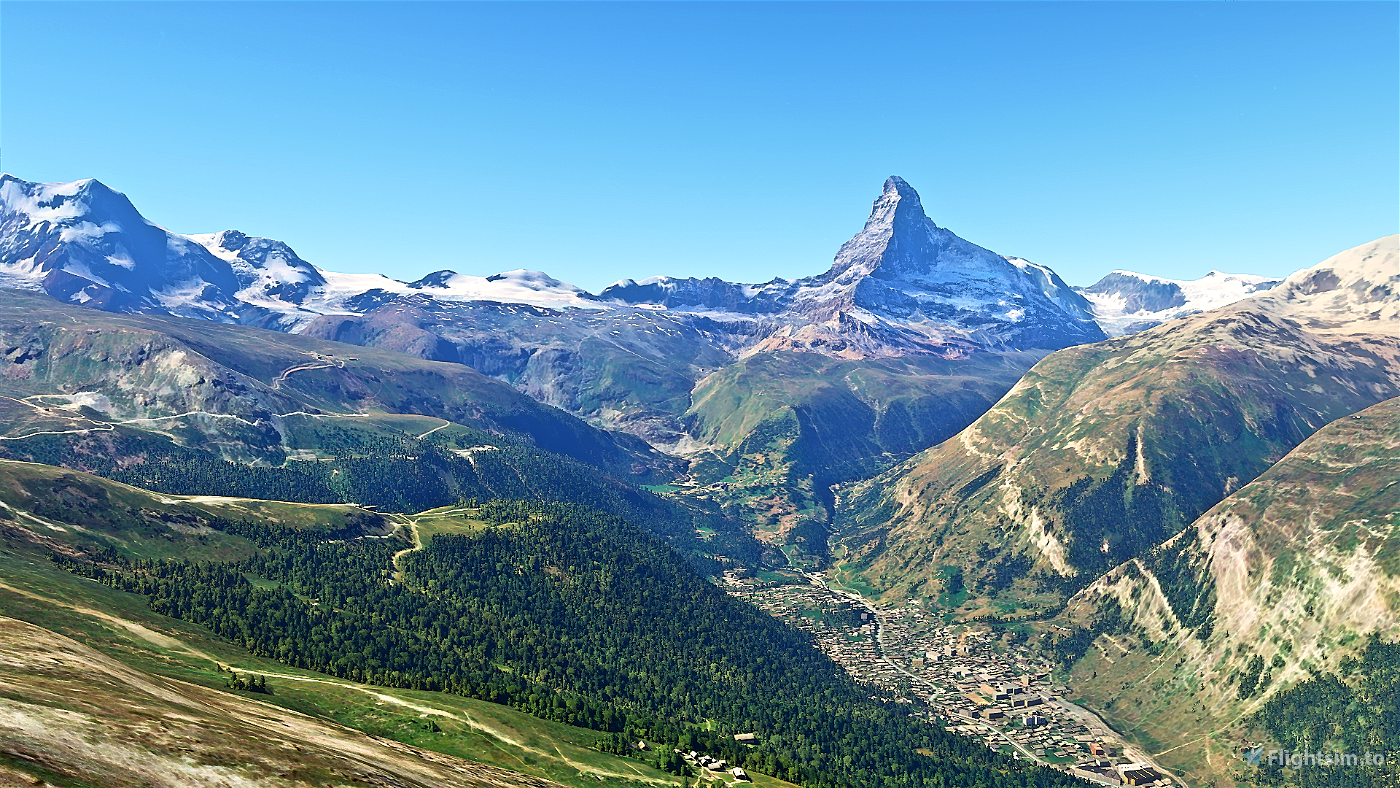 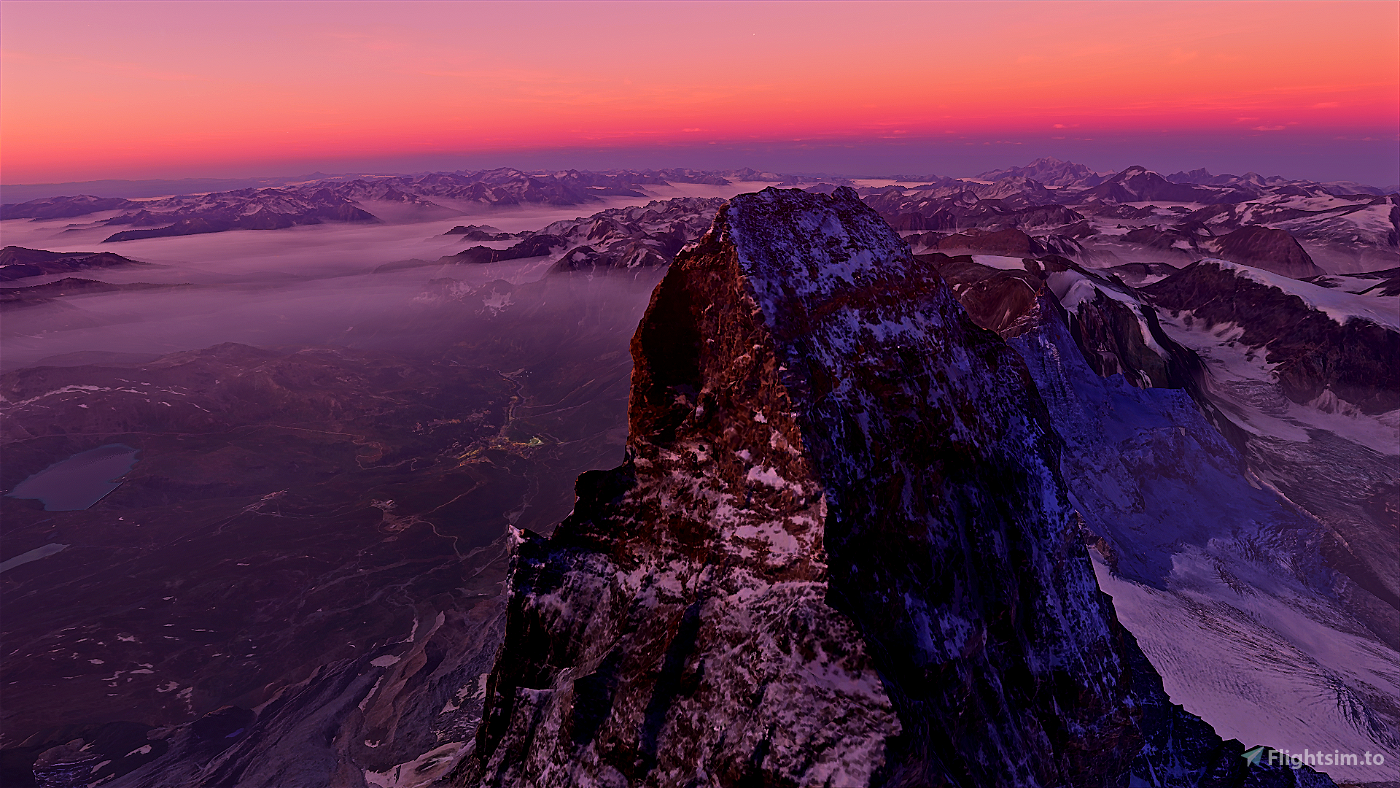 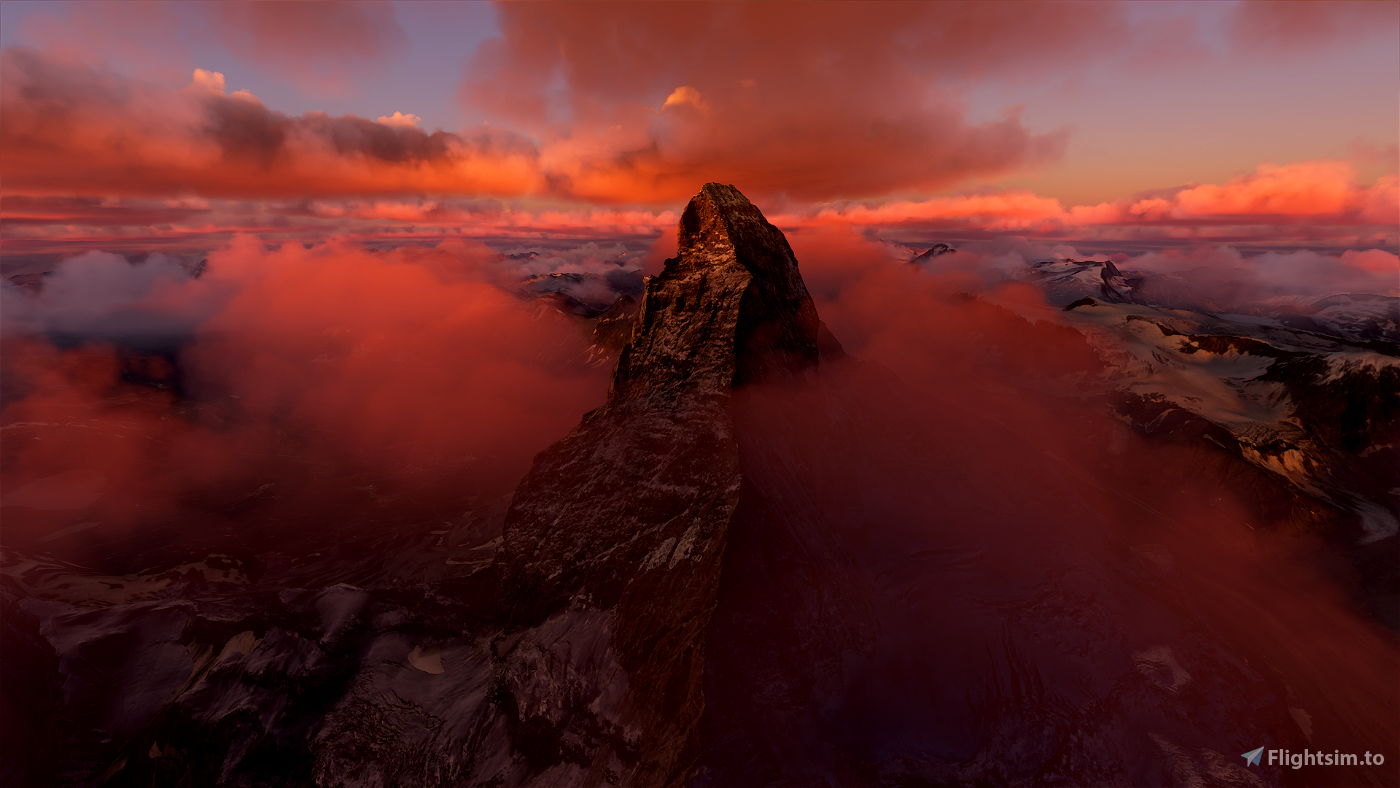 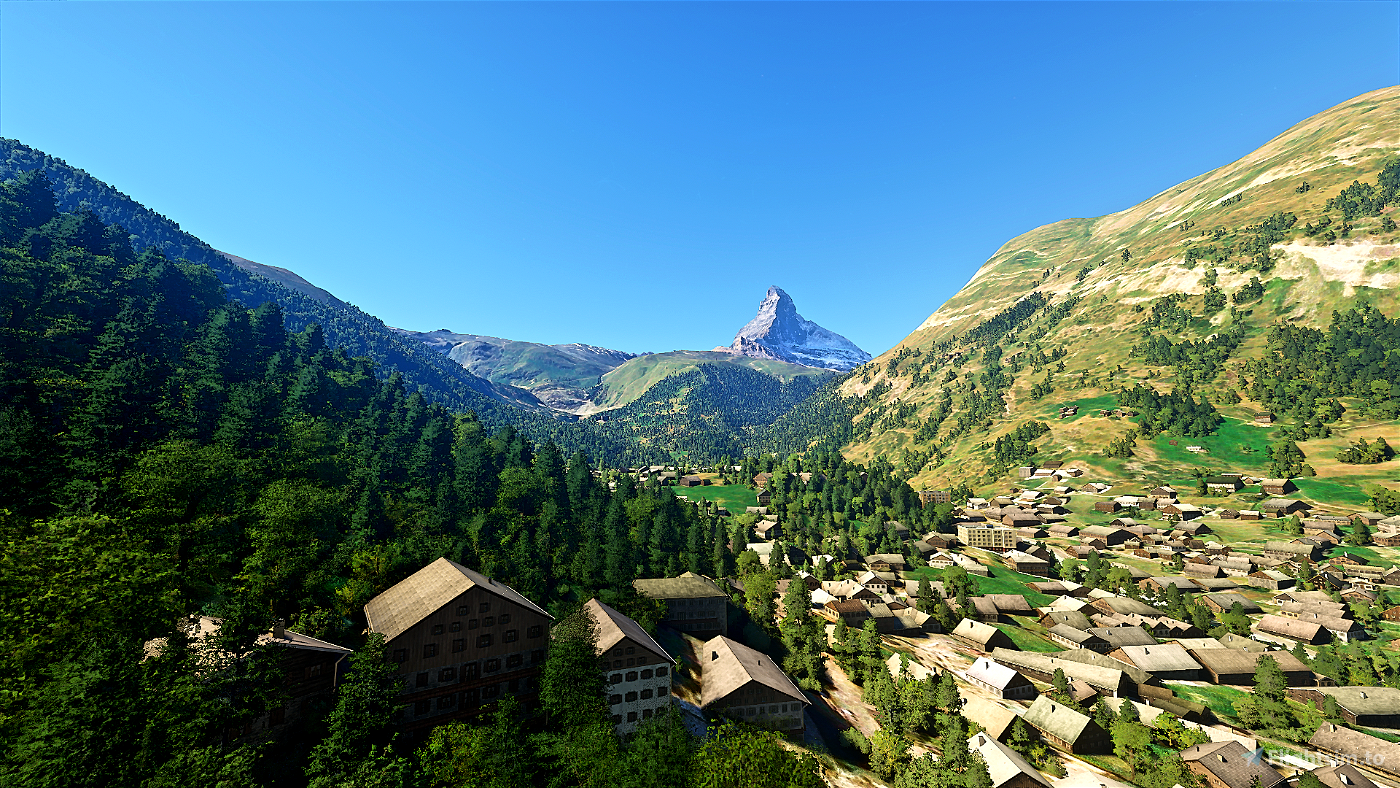 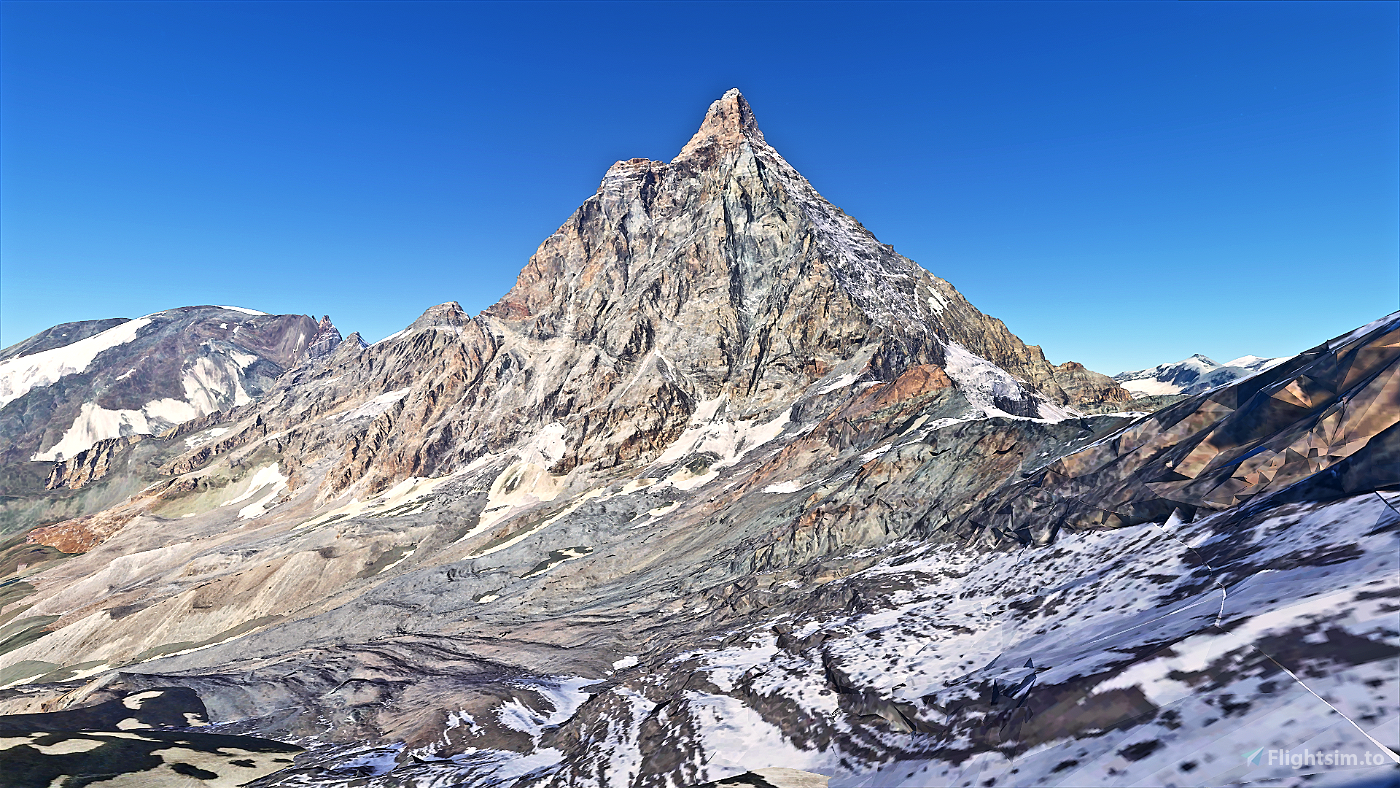 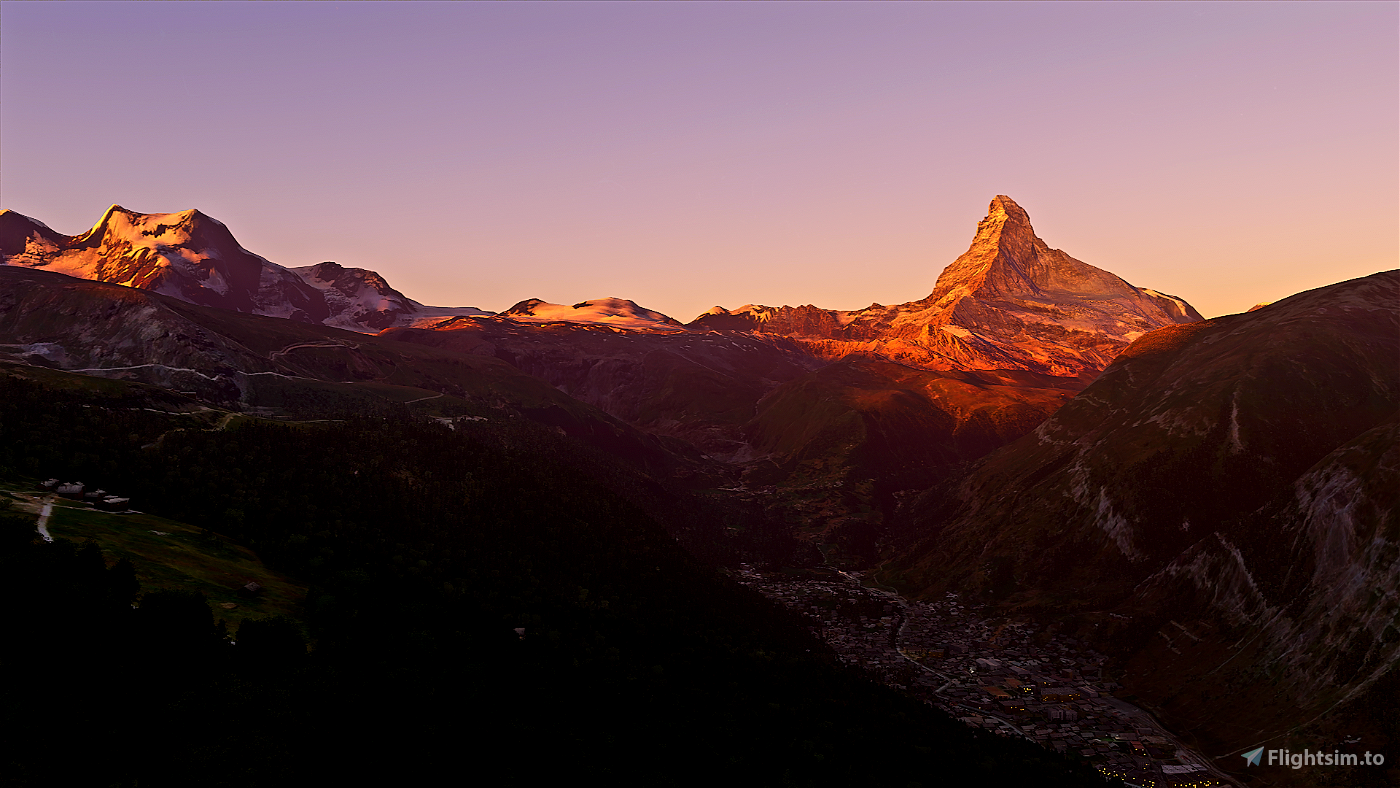 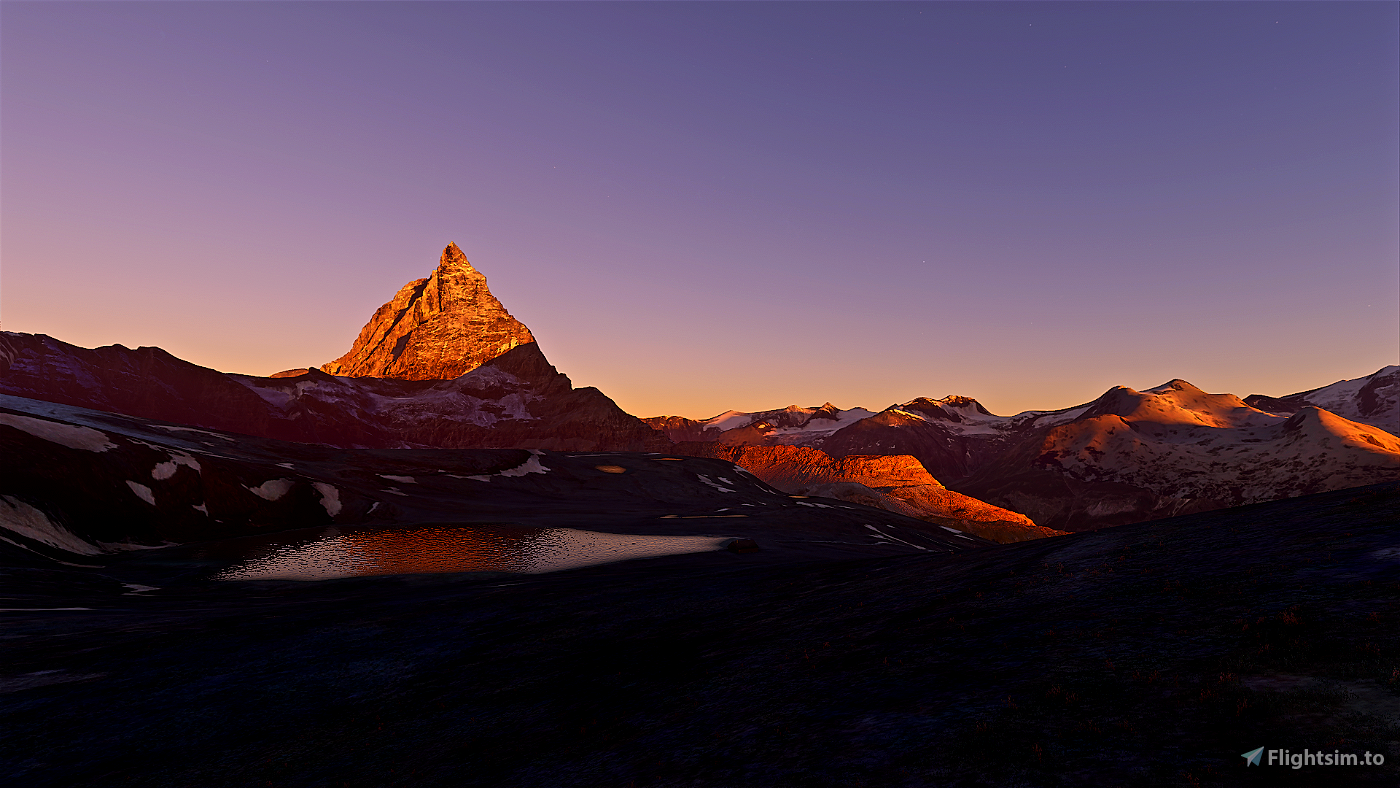 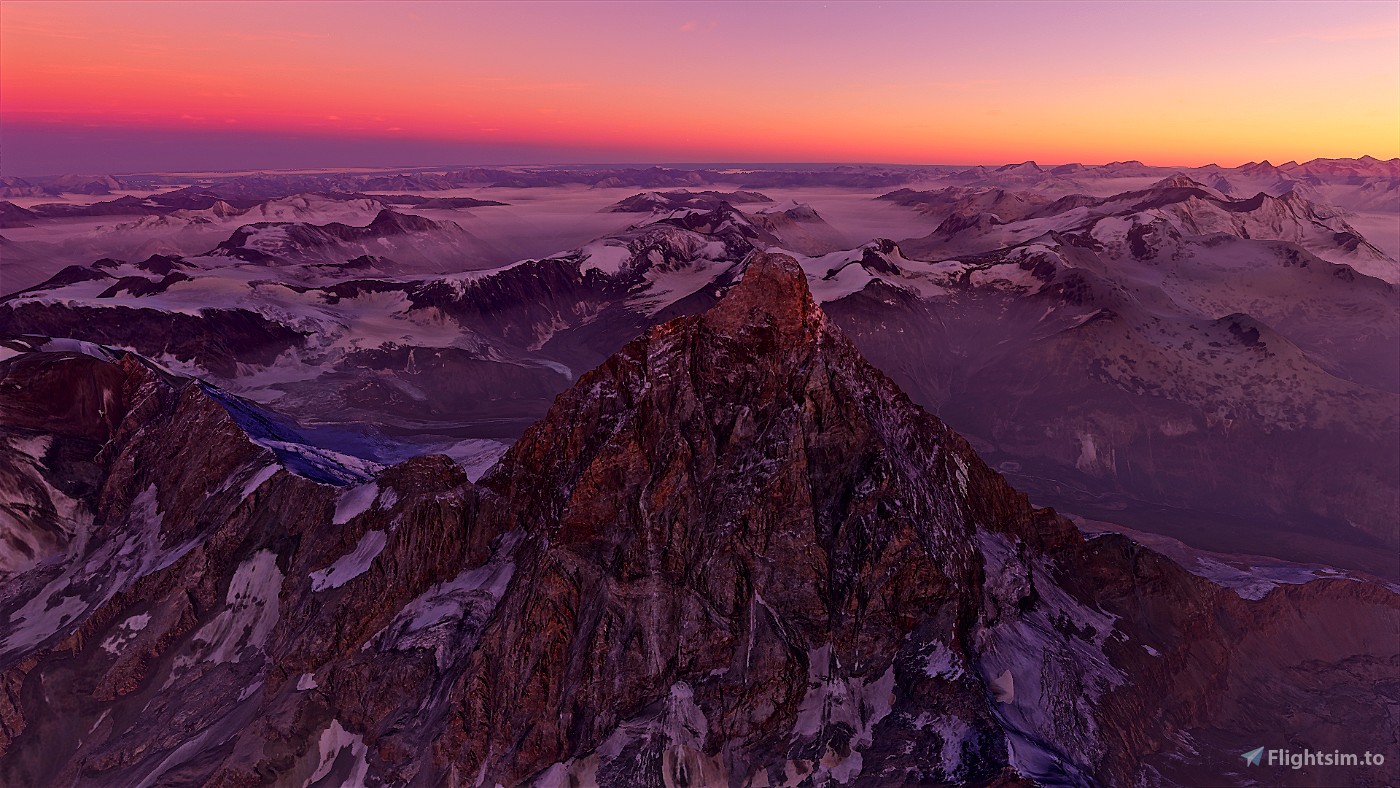 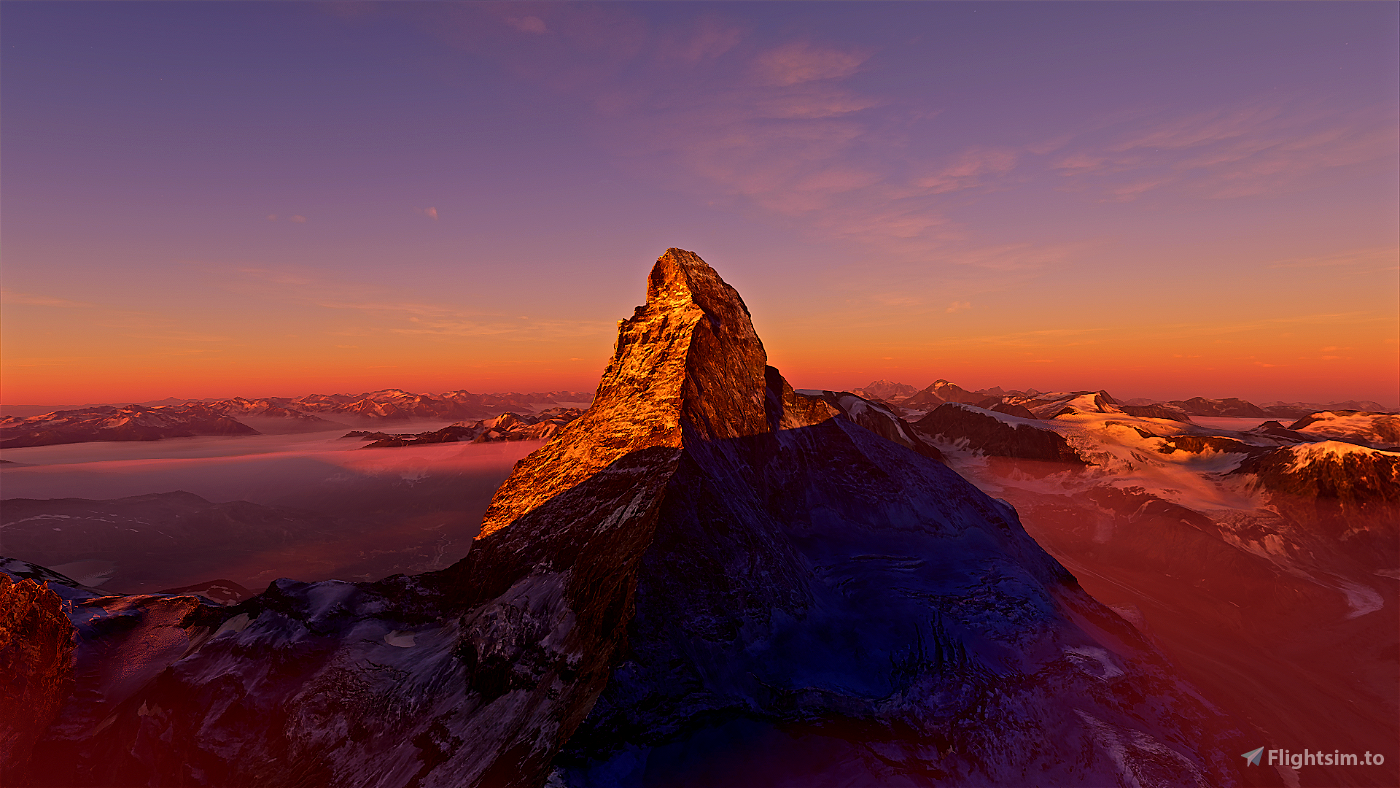 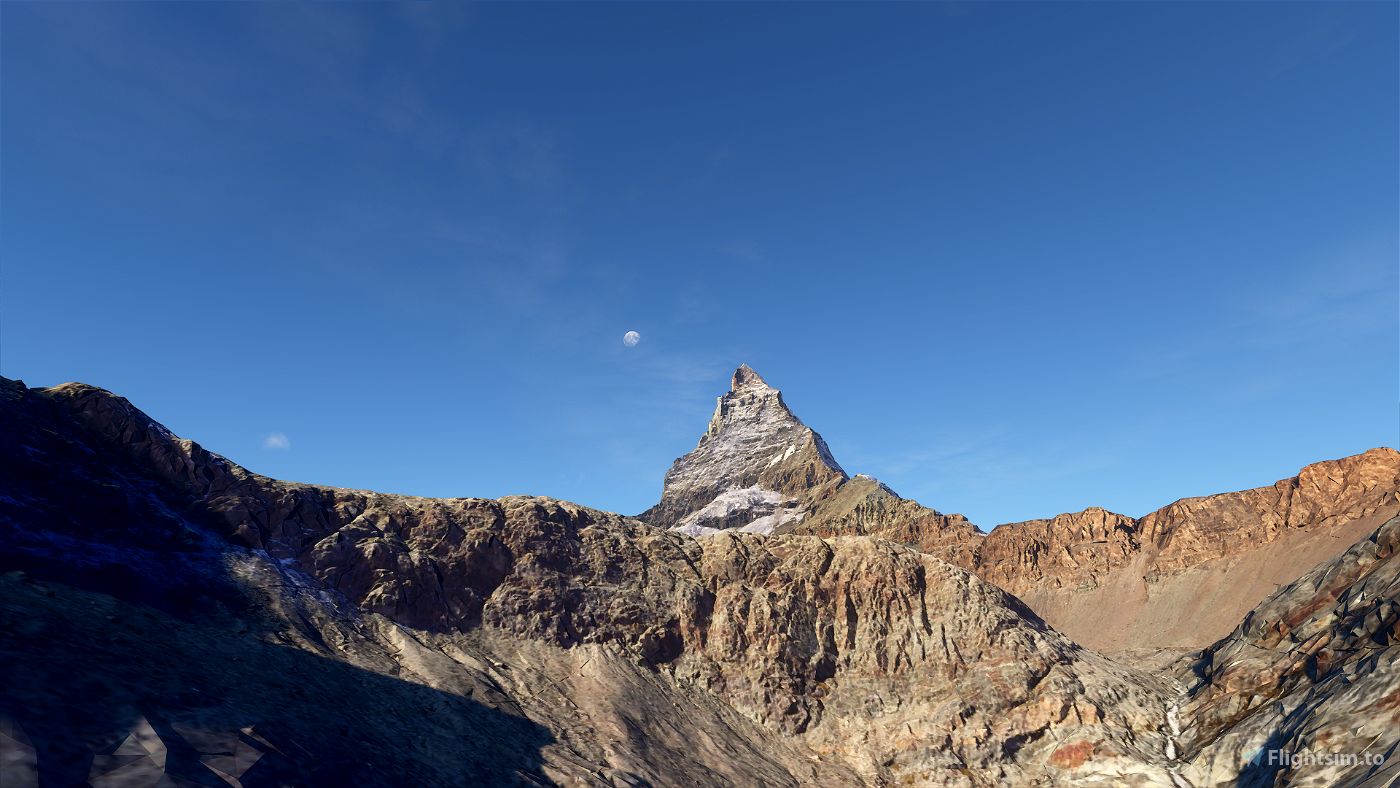 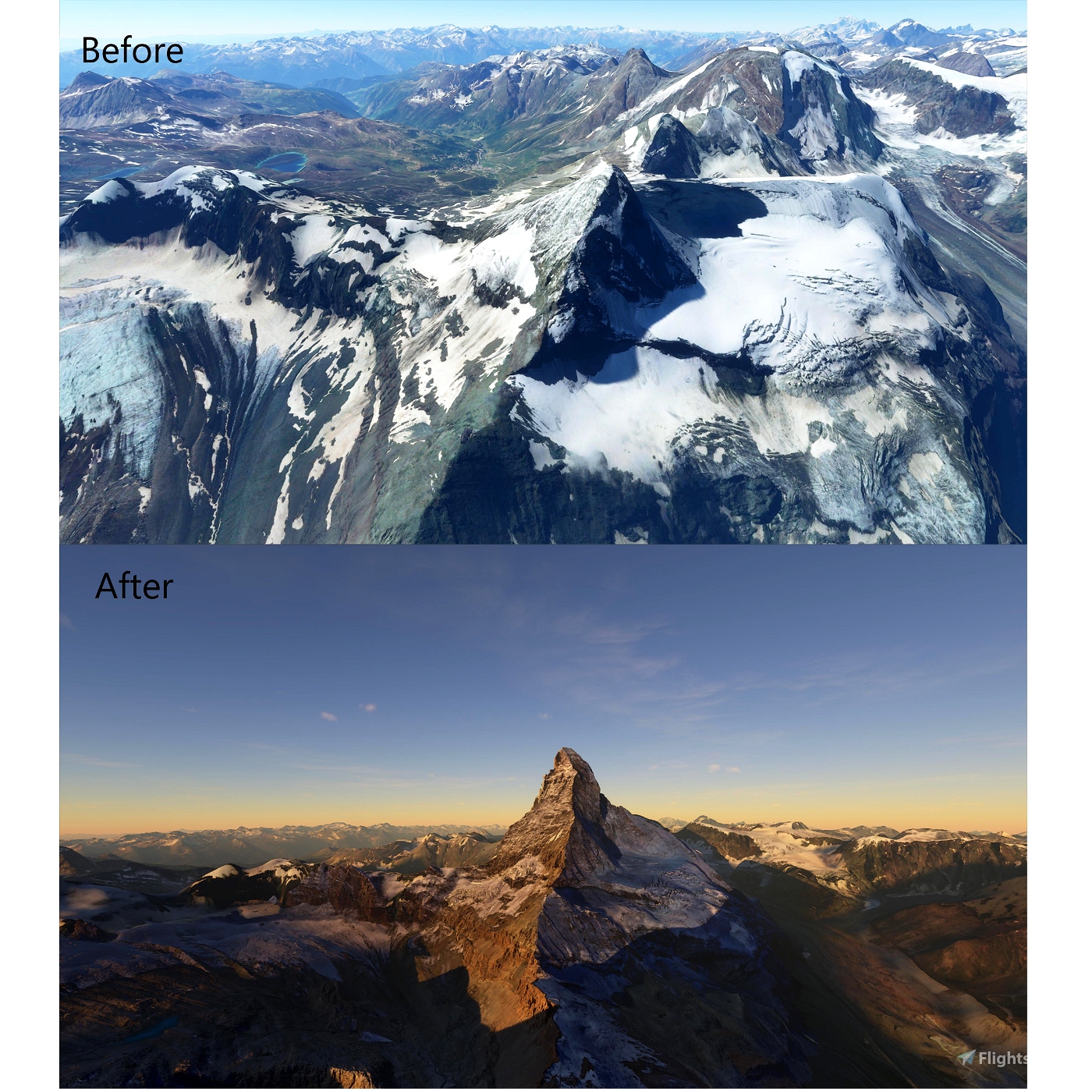 At last, Matterhorn mountain scenery, because the default one looked underwhelming and did no justice to this extremely beautiful natural wonder. Fully photogrammetry based model and terraformed edges around the mountain + new additions arround the area.

Info: Matterhorn, the Swiss and incredibly photogenic giant. Famous around the world, this mountain is a beauty. That's why I took the challenge to "renovate" the original one of the game, that looked lacking. Matterhorn figure is very difficult to be interpreted successfully in the sim with low resolution mesh data, it needed a really high resolution model. This is what it is.

- Added 4 LOD levels and improved performance when flying far from the mountain or when viewing it from certain angles.
- Color corrected the textures as much as possible and totally removed the default bluish shadows to make it look natural and beautiful.
- Added cable car pylons for the whole area. Now it's more interesting to explore around the mountain following their path.
- Added polygons for the missing forests south of Zermatt near the foothills of the mountain. Now they are properly populated with trees.

*Also, the older Version 1.0 will always be available in Nexusmods.com in the "Files" section.

There are KNOWN ISSUES such as : - May cause severe fps drops on higher resolution displays. - You can pass beneath the artificial ground of the model because terrain mesh is not accurate,so no collision for the most part. -There are also some artifacts at the edges of the scenery(i tried to cover up most of them somehow) and my theory is that they were created during the injection of the model in blender.

How to Install: Drag and drop the folder from the .zip , in your "Community" folder. That's it, enjoy!!
*Also make sure to check out my other addon, the little grass airstrip of Chamois, south and very close to the mountain! Landing there is a challenge! Link:  https://flightsim.to/file/326/airport-of-chamois-ao02-valle-d-aosta


Trivia: The Matterhorn (/ˈmætərhɔːrn/, German: [ˈmatərˌhɔrn]; Italian: Cervino [tʃerˈviːno]; French: Cervin [sɛʁvɛ̃]) is a mountain of the Alps, straddling the main watershed and border between Switzerland and Italy. It is a large, near-symmetric pyramidal peak in the extended Monte Rosa area of the Pennine Alps, whose summit is 4,478 metres (14,692 ft) high, making it one of the highest summits in the Alps and Europe.The four steep faces, rising above the surrounding glaciers, face the four compass points and are split by the Hörnli, Furggen, Leone/Lion, and Zmutt ridges. The mountain overlooks the Swiss town of Zermatt, in the canton of Valais, to the north-east and the Italian town of Breuil-Cervinia in the Aosta Valley to the south. Just east of the Matterhorn is Theodul Pass, the main passage between the two valleys on its north and south sides, and a trade route since the Roman Era.The Matterhorn was studied by Horace-Bénédict de Saussure in the late eighteenth century, who was followed by other renowned naturalists and artists, such as John Ruskin, in the 19th century. It remained unclimbed after most of the other great Alpine peaks had been attained and became the subject of an international competition for the summit. The first ascent of the Matterhorn was in 1865 from Zermatt by a party led by Edward Whymper; it ended when four of its seven members fell to their deaths on the descent. This disaster, later portrayed in several films, marked the end of the golden age of alpinism. The north face was not climbed until 1931 and is among the three biggest north faces of the Alps, known as "The Trilogy". The west face, which is the highest of the Matterhorn's four faces, was completely climbed only in 1962. It is estimated that over 500 alpinists have died on the Matterhorn, making it one of the deadliest peaks in the world.The Matterhorn is mainly composed of gneisses (originally fragments of the African Plate before the Alpine orogeny) from the Dent Blanche nappe, lying over ophiolites and sedimentary rocks of the Penninic nappes. The mountain's current shape is the result of cirque erosion due to multiple glaciers diverging from the peak, such as the Matterhorn Glacier at the base of the north face. Sometimes referred to as the Mountain of Mountains (German: Berg der Berge),the Matterhorn has become an iconic emblem of the Alps in general. Since the end of the 19th century, when railways were built in the area, the mountain has attracted increasing numbers of visitors and climbers. Each year, numerous mountaineers try to climb the Matterhorn from the Hörnli Hut via the northeast Hörnli ridge, the most popular route to the summit. Many trekkers also undertake the 10-day-long circuit around the mountain. The Matterhorn has been part of the Swiss Federal Inventory of Natural Monuments since 1983.

File credits
This free creation contains content from Google Maps or Google Earth. In accordance with Google Terms of Services and especially point 2.2 of Google Maps/Google Earth Additional Terms of Service, this creation is based on « fair use » or « fair dealing » of the data provided by google throught its services. No commercial use or any gain is or will ever be made by the author of this creation, who doesn’t own anything regarding google assets but a simple user Licence. According to the following document https://www.google.com/intl/en-GB/permissions/geoguidelines/, the author is freely sharing a creative application of Google Maps or Google Earth. The author will not recieve any form of retribution for sharing his work, even general donations from users of file hosting web services under the form of « rewards » or « tips ». If this content would be found somewhere where it is provided in exchange of money or any kind of retribution, I wouldn’t be with the consent of the author who will stick to strict free content creation diffusion.

You haven't downloaded this mod yet.
This file has been scanned for viruses and is safe to download.

© NikPrist - All rights reserved. Any reupload or redistribution of this file without the author's prior written consent is forbidden.
This Flight Simulator 2020 Mod was created by NikPrist and shared in Scenery Enhancements » Mountains for Flight Simulator 2020.
Download for free and enhance your experience in MSFS 2020.

I am the owner of this file!
If you are the legitimate author of this file, please feel free to sign up on our site. After registration, click on the "Migrate" button on the bottom right and our team will check your request within 24 hours. If successful, this file will be migrated to your account and you can start hosting and modifying your file on our lightning-fast servers for free. Thanks for your cooperation.

This is the place where you can discuss on this item. Any conversation that would be too long and excessive for comments finds its place here. Rules