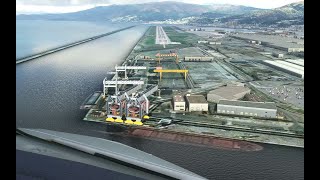 Genoa - Sestri Airport (IATA: GOA, ICAO: LIMJ), also known as "Cristoforo Colombo" International Airport, is an Italian airport located in the city of Genoa, on an artificial peninsula opposite the Sestri Ponente district. The facility is equipped with a 2916 m long paved airstrip, with RWY 10-28 orientation.

Given its proximity to the city (it is located about 9 km west of the center of Genoa), the airport is considered a city airport.

The airport is the largest in Liguria, with about 1.5 million passengers per year, and connects Genoa with the numerous national airports and the main European intercontinental interchange airports.

The scenary includes: Three custom buildings for Terminal, Control Tower and Piaggio Hangars located north of the airport. It also include the cranes of the nearby harbor
- All horizontal signs have been redesigned using an updated satellite image as a reference.
- Repositioned all parking spot to reflect their real position and correct numbering, as indicated on the airport charts
- Corrected course of the Localizer Path with the two degrees offset missing in the default airport (so yes, it's right that it's crooked :-) ). To work around a flaw in MSFS (which you can read here for more info) I hid a fictional runway under the real one. So in your FMS, both will appear. For practical purposes, nothing changes. Choose any one
PS. Beware of the harbor cranes in short final :-)

This scenery is fully compatible with:
- Genova Cristoforo Colombo airport (LIMJ) - Italy by Quelcertoleo which adds environment elements that greatly increase immersion. you can find it here:
https://it.flightsim.to/file/1912/genova-cristoforo-colombo-airport-limj-italy

Simply, extract the content of the zip file inside Community folder.
the scenario consists of two folders. The first named "simog-limj-airport" is the main scenario and contains the airport.
The second, named "Simog-GenovaHarbor" contains the harbor cranes. This folder can be removed in case you already use another scenario with these elements (for example Project Coastline Italy or Genova City by Dax87) in order to guarantee compatibility.

© simog - All rights reserved. Any reupload or redistribution of this file without the author's prior written consent is forbidden.
This Flight Simulator 2020 Mod was created by simog and shared in Scenery Enhancements » Intl. Airports for Microsoft Flight Simulator.