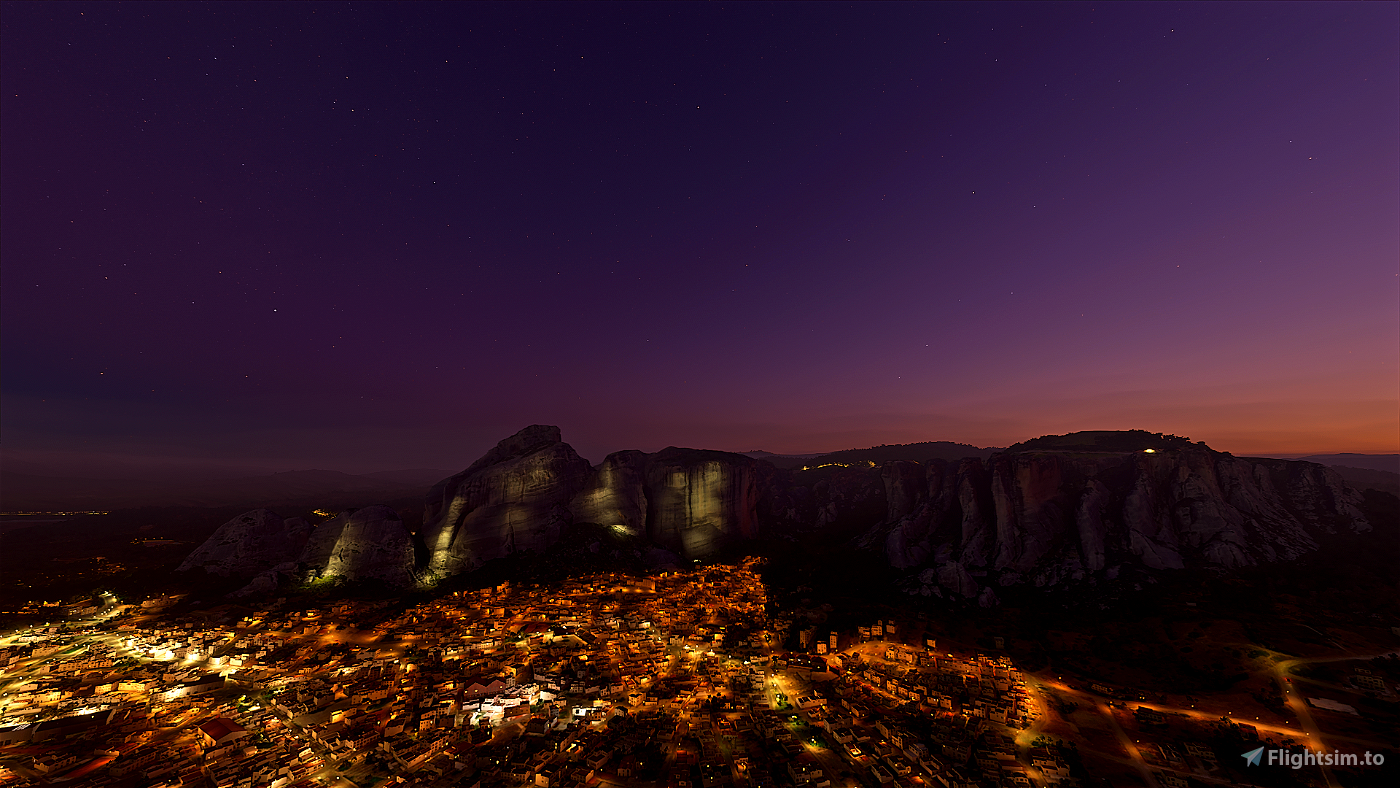 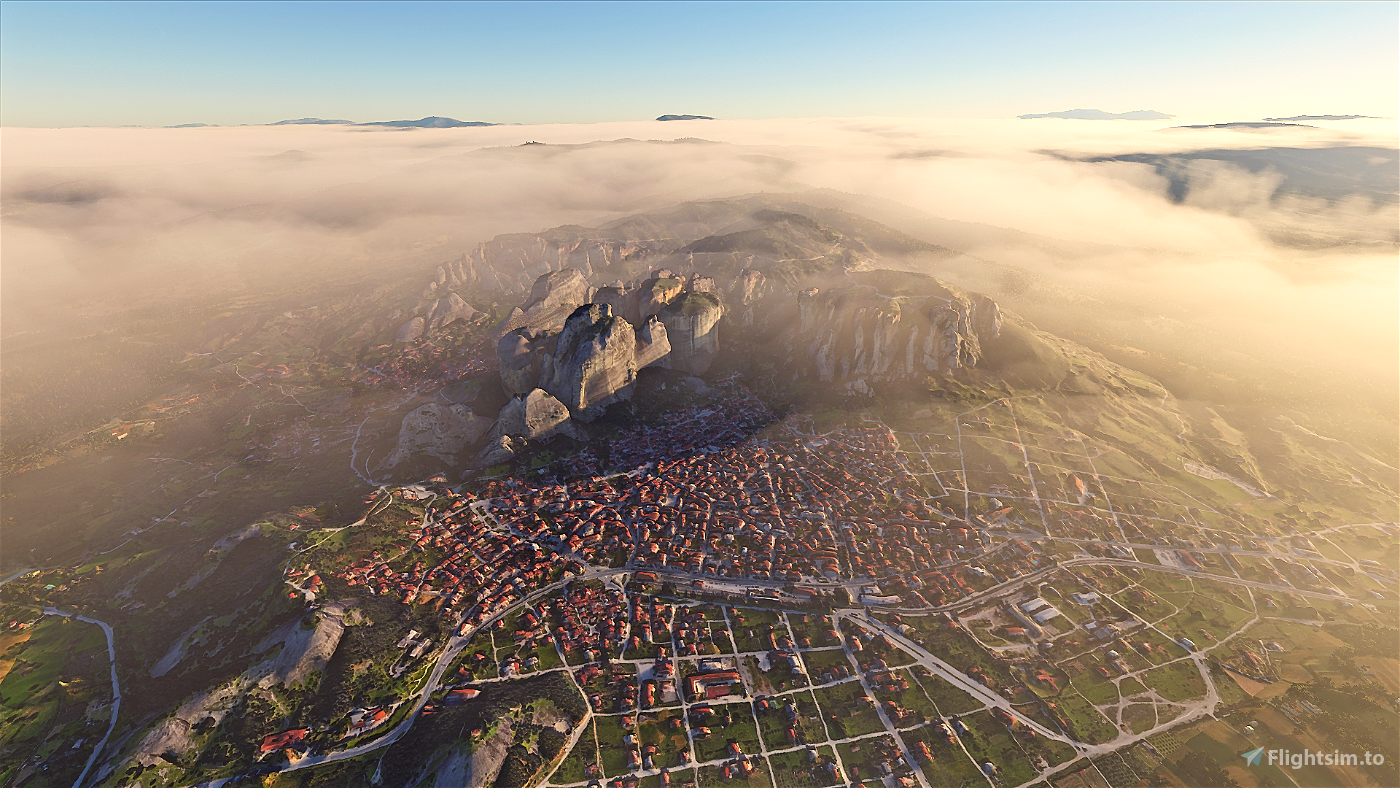 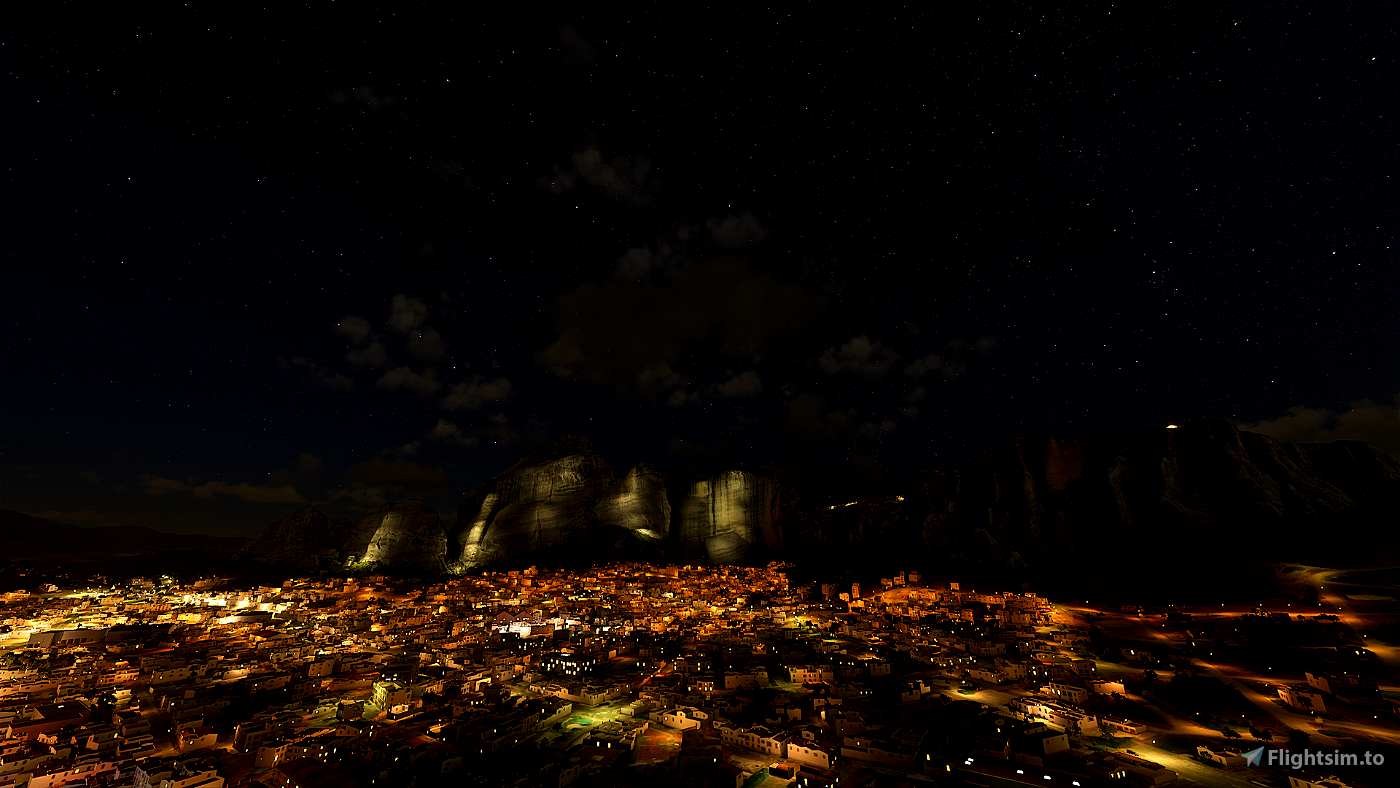 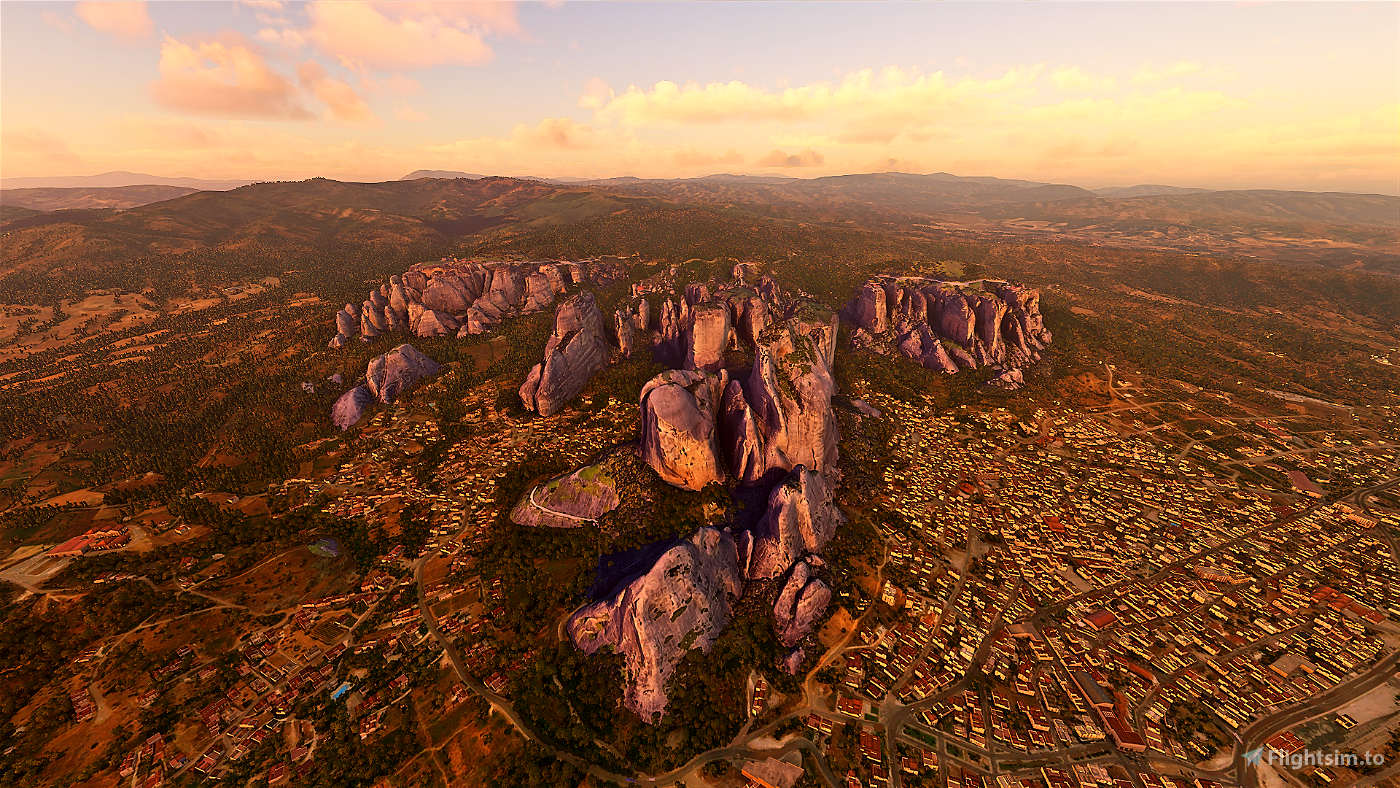 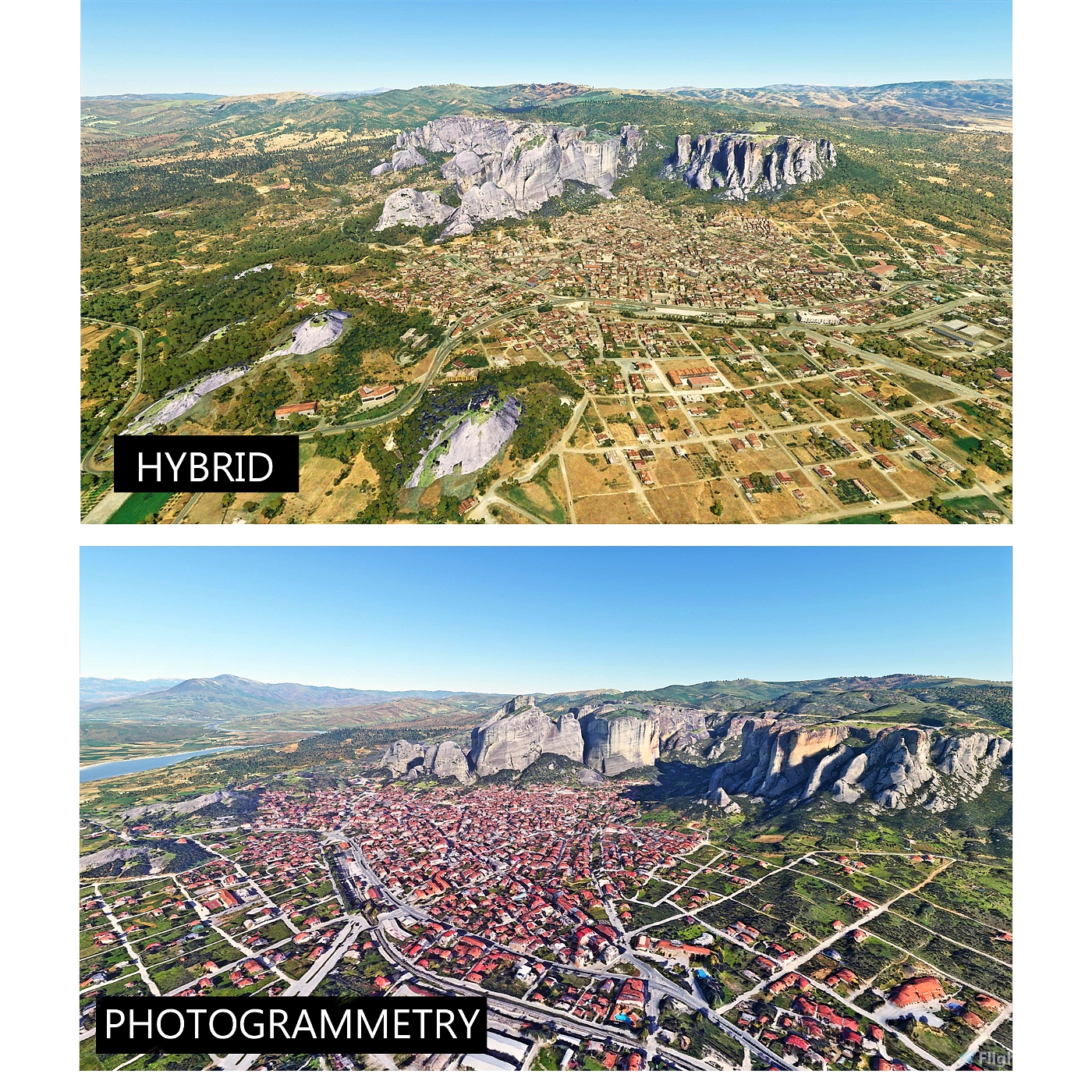 Ultra detailed scenery for the Greek "Monument Valley" also known as "Meteora". Handmade night lights are included, illuminating the rocks as they are in real life photos and the mighty monasteries as well,making for a surreal flight.

VERSIONS. This scenery has 2 different versions. (You can see a comparison image for visual differences between the two versions in the photos)

*The zip file includes both of them. Choose the one you want. The photogrammetric version will be updated soon with a very high resolution model. Right now the “Hybrid” is the superior one.

1. Totally covered with the "Photogrammetric" model (smaller in size too, yeah). It is very useful to know, that the photogrammetry model of the town and its buildings is not highly detailed resulting in "melted" looking buildings and details in the scenery. The rocks and the hills look breathtaking nonetheless.
***Stay tuned: I am planning to update the Photogrammetry version with extremely high resolution models soon. This is the first iteration of the scenery.

2. A "Hybrid" one, meaning it has the photogrammetric essential models(the rocks) "fused" within the default terrain,buildings and trees (I'll update some missing trees eventually).  *(This version is also a little larger and maybe "laggy" for some without powerful machines)

The hybrid version took many hours to be realised into it's final form , due to the technical difficulty of making so many different terraforming rectangles into the SDK, so that the model "fits" naturally into the default landscape that Blackshark AI created. It is also quite important to note, that not all the rocks have collision and that you can actually fly under the ground in many occasions. It is not an easy task to "fit" the default , real ground of the sim , to the modded one of the photogrammetric model.

TO INSTALL: Just choose the version of your liking (most pleasing to you) and drag and drop the folder from the .zip to your "Community" folder.

- Let me know if you have any problems or if you can propose corrections. Also check out my other mods!

Trivia: The Meteora, Greek: Μετέωρα,  is a rock formation in central Greece hosting one of the largest and most precipitously built complexes of Eastern Orthodox monasteries, second in importance only to Mount Athos. The six (of an original twenty four) monasteries are built on immense natural pillars and hill-like rounded boulders that dominate the local area. It is located near the town of Kalambaka at the northwestern edge of the Plain of Thessaly near the Pineios river and Pindus Mountains.Meteora is included on the UNESCO World Heritage List under criteria I, II, IV, V, and VII.The name means "lofty", "elevated", and is etymologically related to meteor.*

Show your gratitude by making a donation. This mod was brought to you by NikPrist. You may donate if you like. 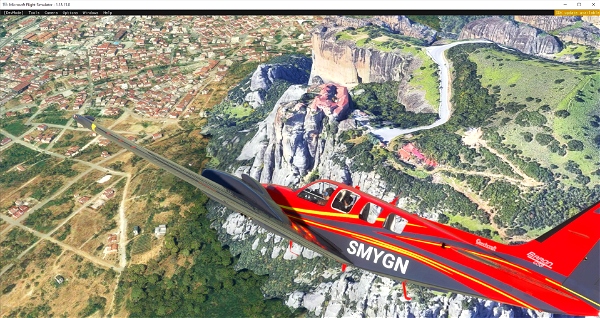 These users have donated to NikPrist to keep him making awesome add-ons everyone can enjoy.

Hi, the hybrid version is not displayed correctly for me? What could be the cause? ! Picture in the gallery. Greetings FSC512

Very nice, I did a video for Greece and used your mod (credited your page in the description), check it here: https://www.youtube.com/watch?v=amgqGBB9m48

11 month(s) ago
Many thanks for this mod! this is really incredible work!
0
0
Reply

Later: Excellent!!! I truly enjoyed that.

1 year(s) ago
Fantastic job. Flies over it yesterday, it looks stunning.
0
0
Reply

1 year(s) ago
Very nice job. Thanks you very much. I'm excited for the photogrametry update.
0
0
Reply

1 year(s) ago
@Ace Thank you for your kind words! Hope you had a good time with it! 😉 I'll continue making Greek scenery. I have some new already , waiting for an upload.
0
0
Reply

1 year(s) ago
@pcayman981 Thank you so much for your flattering words! I hope I managed to enrich your gameplay experience in some meaningful way and by adding character to a location. I put a lot of work into these and many hours of trying for the best result possible. Thank you.
0
0
Reply

1 year(s) ago
Absolutely stellar work, enriches the area so, so much! Please keep those Greek landmarks coming if you haven't gotten tired of them yet! 😊
0
0
Reply

1 year(s) ago
This is freaking incredible. I would seriously compare this to a premium payware quality add-on. The fact that there are such talented mod creators / flight sim enthusiasts out there who do this for the community makes this sim even better.

Amazing, and thank you for offering the hybrid. Truly awesome stuff here folks.