(Project is temporarily halted) Welcome to Oslo!  Hello, flyer! Thank you for downloading and checking out my new scenery! I am very proud to introduce Oslo Airport, Gardermoen to you after nearly 80 hours of development! KW Oslo Airport 2020 Features: Added up-to-date aprons/taxiways around the northern pier and other locations... 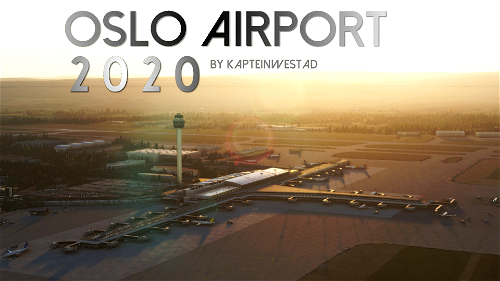 Hello, flyer! Thank you for downloading and checking out my new scenery! I am very proud to introduce Oslo Airport, Gardermoen to you after nearly 80 hours of development!

Oslo Airport is the main international airport in Norway. In 2019, 28 600 000 passengers traveled through the airport which made it the second busiest airport in the Nordic countries. The airport lies north of Oslo (the capital of Norway) and engages in challenging and fun approaches in Norway’s merciless weather. This freeware contains an up-to-date version of the airport, in comparison to the default which is from ~2014.

Simply drag and drop the “kw-oslo-engm” folder in your Community folder!

(To find your community folder, visit this link: https://www.flightsim.com/vbfs/content.php?21235-Finding-The-MSFS-2020-Community-Folder)

I just want to give a big thank you to MuppetOwl and another anonymous donator for supporting me! I really appreciate it, as it helps keeping my development active!

“KapteinWestad ENGM” is not a 100% accurate representation of Oslo Airport, Gardermoen. It is only taking further steps in that direction.

Show your gratitude by making a donation. This mod was brought to you by KapteinWestad. You may donate if you like.

what a good scenary ...thanks

This project is on hold. Take a look at https://flightsim.to/file/25434/oslo-gardermoen-airport-engm instead.

I don't think this project is being updated anymore. Check the ENGM by hergi1234.

Really a Great and Amazing work !!! I will share it within my simmers Group ! Splendid ! really ! will you add later cars in parking + passengers inside terminals ? Overall full stars for U ! Cheers from paris

One of the best yet, many thanks

This is just amazing!

I don´t know why, but its simply not working for me, i installed it, but i have the same default airport

shame because its a good airport

The terminal buildings are not there! They're invisible.

What a beautiful airport, one of the best!

Hello there, is it possible for you to duplicate this airport somewhere in Himalayas for $ 100 donation? I am recently scammed, so a lil tight, I could show more appreciation in coming days. asking for personal use only.... reach out to me on discord at DrukairPilot#3625

Very good work with this airport, but sadly it does not work optimally anymore since SU5, I have had several CTDs, I hope you have time to fix it in the future.

Love the airport, but have one request.. Gatenumbers marked in yellow before line to gate. Would it be possible to ad them? You can see them well on google maps and on the chart for ENGM

Up there it reads that the project is temporarily halted...and the previous latest change to this has been made in January...

Anyway, I suggest against using outdated sceneries even though it looks okay for some of you and runs okay. Remember, it only seems to be "working okay"...to you...but actually it is causing who knows how many instabilities, and those in return cause other instabilities, and after some time some of the sim files among those hundreds of thousands of files get corrupted - then comes along Asobo with the new regular and exciting World update or a Sim update and you start experiencing crashes and lots of problems.

Then folks come to the official MSFS forums and flame at Asobo or Microsoft how they are bad, how they messed up the sim with an update or whatever, etc, etc.

And update doesn't need to happen in order to just start experiencing random crashes after using your sim with such outdated stuff for some period of time.

Also, there is another scenario in which folks use such stuff just because "well it works okay for me" - then they buy some serious tool such as FSUIPC or SPAD.next - sim flips out and then the developers of those tools are getting troubleshooting requests that actually lead nowhere.

I know it all.

Just do not use outdated stuff such as this one, it doesn't even have the proper folder structure against the latest SDK - and what does it say when you read Asobo advices on the official MSFS pages ?

Always use up to date addons, liveries, keep your system up to date, your drivers, etc.

Yet...people still do against it...personally I shan't ever understand the phenomenon.

Requires updating together with a full recomp against the latest MSFS SDK v0.12.0 in order to be useful again (at least for us with the licensed simulator / with the latest MSFS v1.15.10.0 as of this writing).

Otherwise, no doubt a work of dedication having it left abandoned in this state being such a pity.

2 year(s) ago
Nice work, but a few serious issues. Like other users have reported, this crashes for me. Never had a crash before in any other situation, only with this scenery. Also taxi guidance doesn't seem to be working.
0
0
Reply

2 year(s) ago
Just installed this and it's working fine here... Really nice job on the terminal and the improved layout! Hope you get a chance to resume eventually as it's coming together really nicely.
1
0
Reply

2 year(s) ago
Hello, I would like to use your addon but when I load the simulator in oslo I still see the default airport and not yours. I put kw-oslo-engm inside my community folder and other mods work.
0
0
Reply

have the same problem

2 year(s) ago
It's pretty and all but only place where I get constant crashes... ~200 hours in MSFS without problems but in ENGM with this addon I cannot play. 0 crashes with default ENGM. Have re-installed / retried but crashes start to happen if installing the addon and crashes go away if I remove the addon.
0
0
Reply

hmmm that's really weird. I haven't experienced that myself, so I have no clue how I can fix it either

I also got couple of crashes, both at gate 85 asking for pushback with FBW A32NX

edit: I checked and gate 87 for example works fine

These users have donated to KapteinWestad to keep him making awesome add-ons everyone can enjoy.