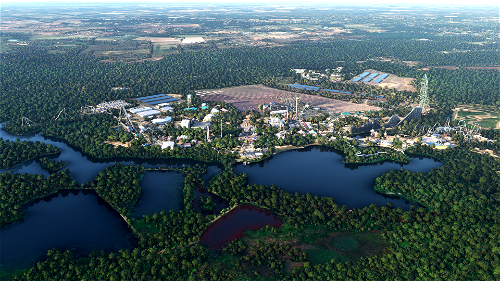 This scenery makes for a fun point of interest in New Jersey.  The complex is adjacent to Propsertown Lake, a perfect landing spot for the Icon A5 after taking in the sights.  Take out the drone and head over to the safari, populated with giraffes, elephants, rhinos and bears.

This scenery improves upon the default as follows:

Version 1.1.0 (11/26/2020)
-Updated for MSFS 1.11.6.0.  Fixed for new elevation data.
-Added custom solar panels over the parking lots. The solar farm south of the park will be included in a future update.
-Now includes photogrammetry for Jackson Premium Outlets north of the park on Rt. 537.
-Removed broken animal scripts and replaced with additonal static animated animals.

Version 1.0.0
-Imported photogrammetry from Google Maps.  Modeled areas include the theme park, safari and water park.  All rollercoasters, rides and buildings are now represented.
-Animals are included in the safari.  Roaming elephants, giraffes, and bears as well as flocks of birds throughout the area.
-Full night lighting, including flashing aircraft collision beacons on Kingda Ka.

Installation
-To upgrade, delete any previous version from your Community folder. Previous versions would be located in a folder called "Scenery-USA-NJ-Six Flags Great Adventure".  You must delete this folder.  Beginning with this release folders will have a new naming scheme.
-Download the ZIP file and extract the "NJSim-Six Flags Great Adventure" folder to your Community Folder.

DISCLAIMER: This scenery is provided as freeware for users of Microsoft Flight Simulator.  The author does not accept payment or compensation of any kind.

Version 2.0 is on the way. It's currently in progress and will include re-colorizing of all rollercoasters for better visibility and contrast, and new ride additions.

Eventually when the Adventure Crossing project is done, it will need an update! Their clearing the forest as we speak haha.

2 year(s) ago / Thanked by NJFlyer606
Thank you for adding the Outlets! It makes flying around there more realistic.
0
0
Reply

2 year(s) ago / Thanked by NJFlyer606
Great job! My home park is cedar point would love to see that in the game. Iv been to this park too and was cool to fly over and see it from another view.
0
0
Reply

2 year(s) ago / Thanked by NJFlyer606
This is incredible thank you! I went fishing a lot at the Prospertown lake when I lived in Jackson so i flew the icon in it!
0
0
Reply 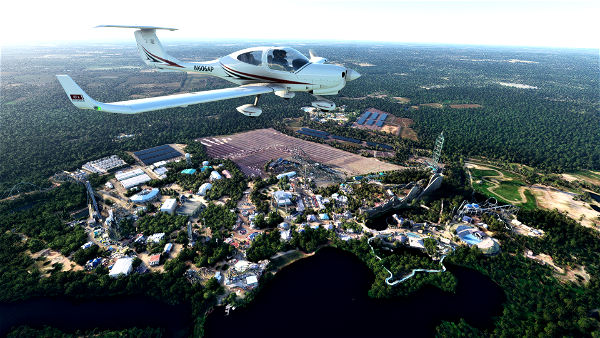 These users have donated to NJFlyer606 to keep him making awesome add-ons everyone can enjoy.