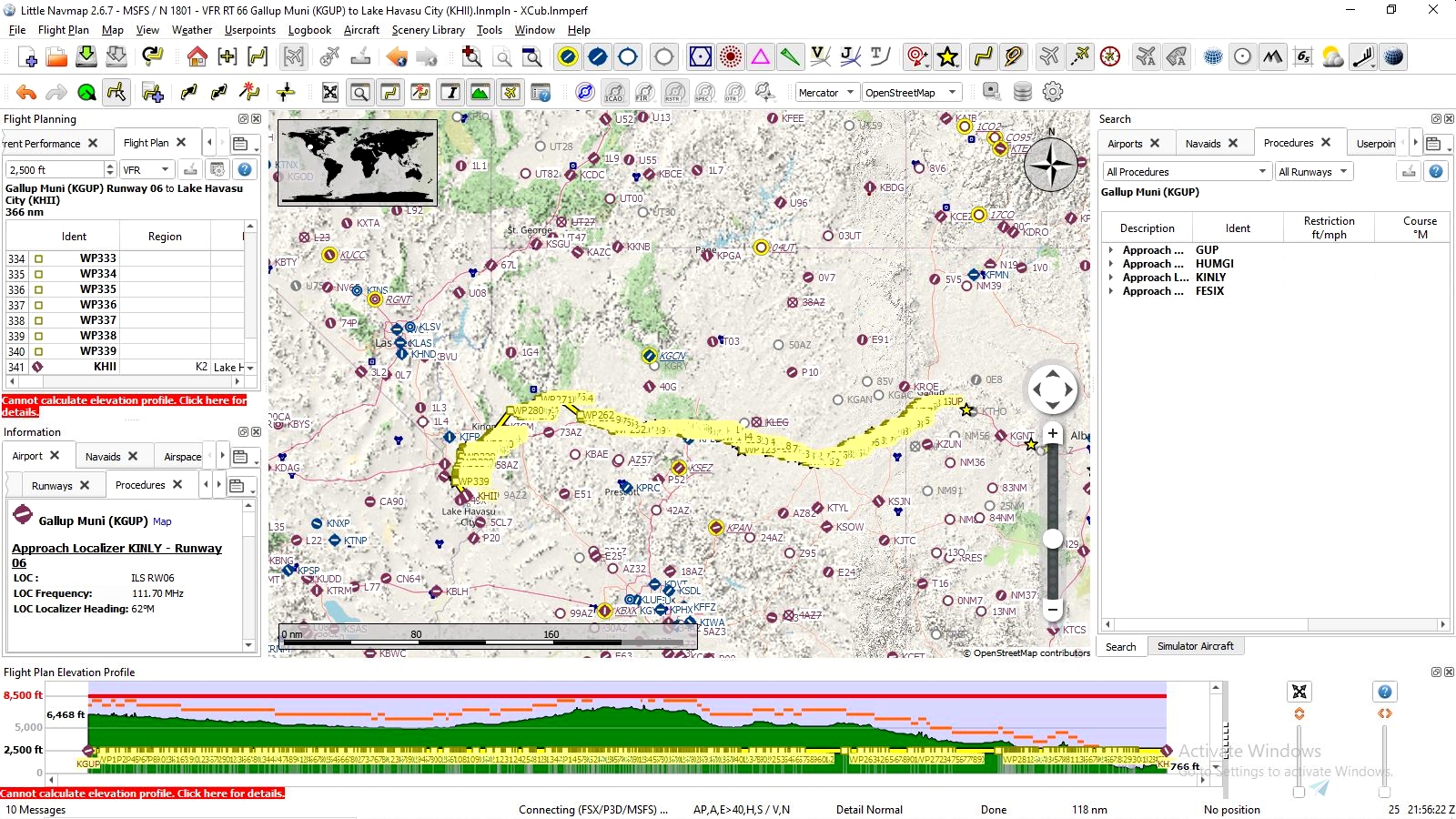 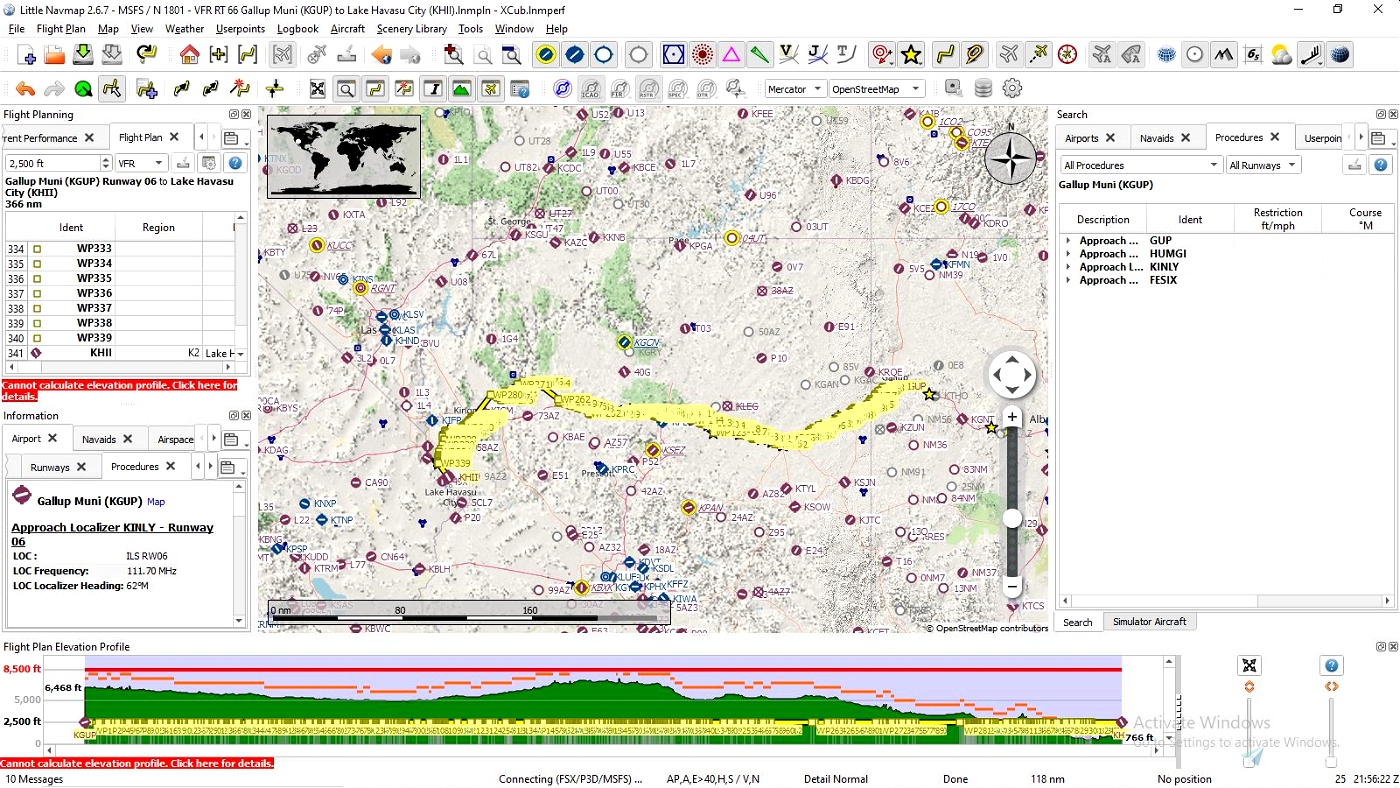 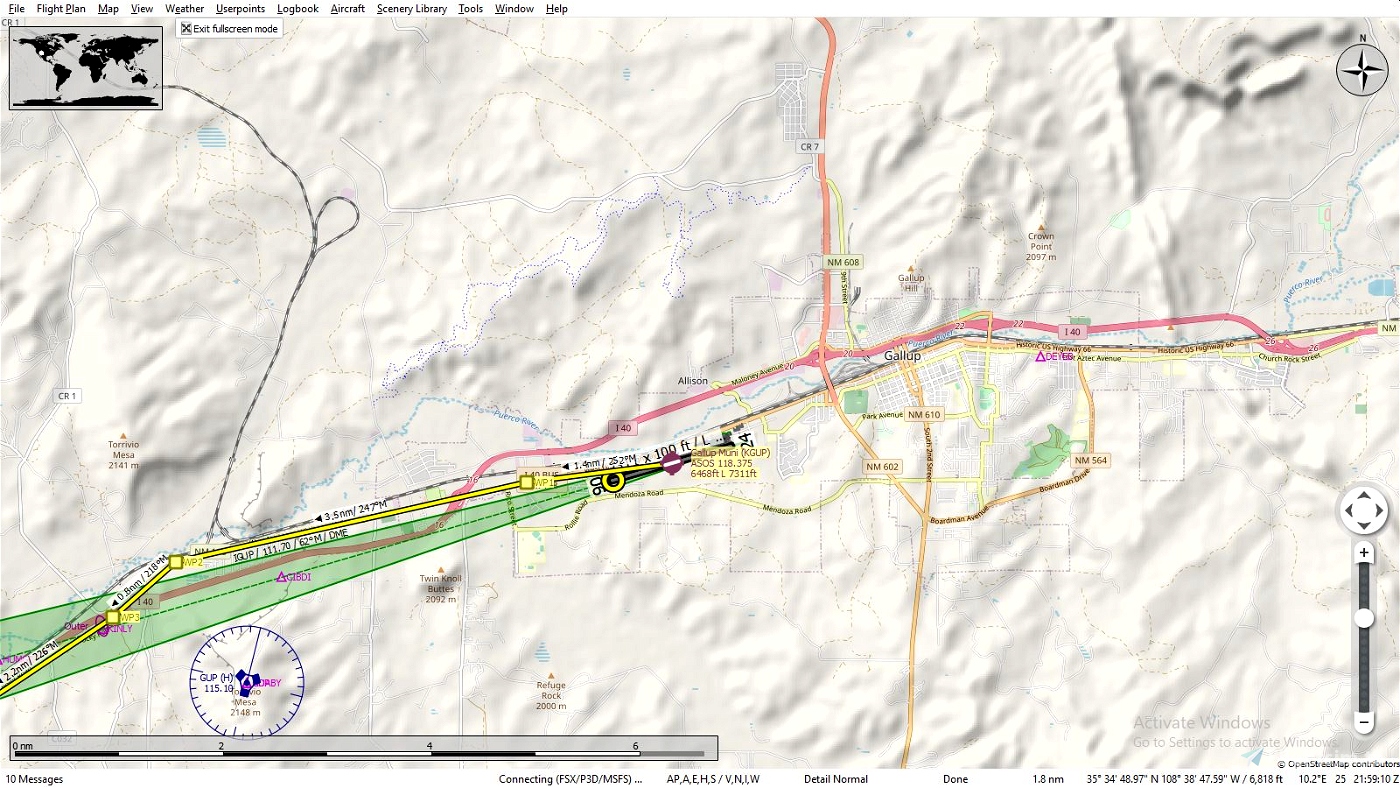 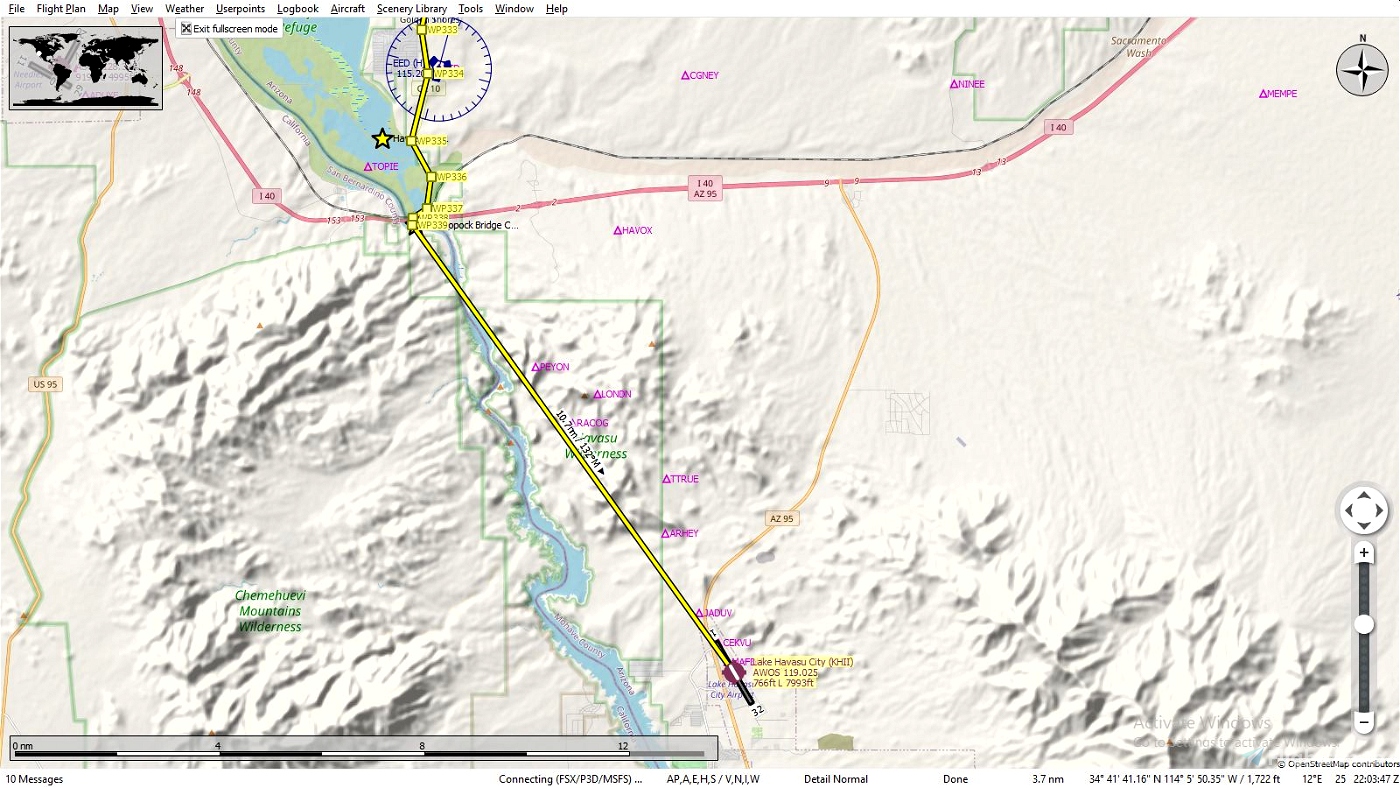 Arizona, "The Grand Canyon State", is the 48th state and last of the contiguous states to be admitted into the Union, it gained statehood February 14, 1912. On September 9, 1927 the state highway system was reorganized and as a result Route 66 became a reality in Arizona and the rest is history. Today the Route 66 in Arizona, just like the other states it passes through, is broken up into bits and pieces though there are still some nice stretches of road to travel. Some paved, some parts now just dirt road while in other areas the road has completely vanished, lucky for us we're flying, so we can just continue on where the old road ends. Again, Route 66 in Arizona has had several route changes made to it over the years and this flight is a mix of those realignments. It seems most of the realignments, here and in other states, bypassed some of the most scenic areas in exchange for a more quick and direct route that bypassed the curves, hills, valleys and mountains. From an economic view point it makes sense, I'm sure many frequent travelers and truck drivers appreciated those changes, not only saving time, but also from a safety perspective as well.

Starting back at Gallop Municipal (KGUP) in New Mexico, it's a short flight to where between WPT's 8 and 9 you'll cross over into Arizona. I'm sure you've noticed the river that we have been following since back in New Mexico, that's the Puerco River, a tributary to the Little Colorado. The Puerco will continue to be a close companion on our flight for a good ways into Arizona. WPT's 29 to 36 are a good example of where the road is now private property, part dirt or missing altogether. Just south of WPT's 46-47 is the Petrified Forest National Park, probably something better seen from the ground rather than from above. Continue to WPT69 and enter the town of Holbrook, you'll fly south to an intersection at WPT 70. There is an A&W Root Beer here and just one block south of there is the Rainbow Rock Shop, a popular stop which has several dinosaurs that stand out front. I think we're high enough they wont pose much of a threat! East of here the Puerco River and the Little Colorado merge, the river through town is the Little Colorado. Onward through town WPT 71 and to the south is one of the last Wigwam Motel's. I'll put a link below for you if you've never seen one. Just outside of town WPT 76 to the south is Cholla Lake and Power Plant.

On to Winslow if you ever want a good corner to stand on, Winslow has you covered! WPT102 is where you can find a statue of a young man standing on a corner with his guitar, it's from a line in the classic song "Take It Easy" by the Eagles. Leave west from Winslow and the Little Colorado River to where we'll take a little detour south 4 1/2 mi at WPT122 to see Meteor Crater. pretty much self explanatory I'd say and visited by many tourists over the years. Of course we'll have to fly back again to get back on 66. WPT128 crosses over Diablo Canyon and another stretch of dirt road. From here to WPT145 will be a series of dirt, no road or I-40 since most of the original road is missing here.

145 is where we will break away from the interstate and fly a loop up north and back down again over one of the routes that was later bypassed.
Just north of Winona WPT 146 if you were to follow the tracks just a little ways about 3/4 mi is the Darling Cinder Pit and Cinder Mountain. The cinder pit is the largest in Arizona. Keep flying NW, If you were to fly about 7 miles north of WPT155, you'll find Cinder Lakes Apollo Training Area built in 1967. This is where astronauts were trained for the future Apollo moon missions. Feel free to go of course and fly over and see this area if you wish. See the links.

All the way from WPT's 148 to 163 going into Flagstaff, we'll fly in and out of the Coconino National Forest. Not a whole lot to point out in Flagstaff from the air, just to the south of WPT179 is the US Naval Observatory, not open to the public. The lake at WPT206 is Davenport Lake. South of WPT213 is Bearizona Wildlife Park a drive-thru nature park.

The depot on the north side of WPT219 in Williams, is The Grand Canyon Railway & Hotel, you can stay here and take a 60 mile train ride north and see the Grand Canyon, or you can just fly there if you have the extra time to spare, just follow the rail line.

Continuing on and enjoying the views we come to WPT264 Grand Canyon Caverns find a place to land and you can take a guided tour or if your up to it a wild cave trip (off the guided trails requires climbing and crawling). Hey how about that, they have an airport Grand Canyon Caverns (L37)! Leave the caverns and on through downtown Kingman WPT's 284-290 then follow along the railroad in the small canyon, WPT299 meets up again with I-40. We'll follow Rt66 on the southern road till at WPT303 cross over the interstate and head towards the mountains to the southwest.

Starting at WPT315 an on to WPT322 the road twists and winds it's way through the hills, it's impossible to follow the route curve by curve on this stretch of the flight! Leaving most of the curves behind you'll come to the town of Oatman just before WPT324. Clark Gable and Carol Lombard spent their honeymoon here at The Oatman Hotel after getting married in Kingman. Frankly my dear, I know many of you won't give a darn, but some here might enjoy learning this little bit of Hollywood movie star history.

Our journey through Arizona is drawing near! Keep flying south and west along the route till WPT335 brings you to the Havasu National Wildlife Reserve and the Colorado River. Cross over I-40 to WPT339 the Old Toprock Bridge that used to cross over the river and into California. We'll cross over just for a brief flight in Cali then back into Arizona to land at (KHII) Lake Havasu City Airport here is where you'll get a well deserved rest, especially if you did do that wild cave trip, before our final leg, California.

Plan on doing the entire trip through Arizona, trust me, if you save the flight while your flying and want to resume later you can, only you won't have any way points to follow since it only loads the flight where you left off and that's it! The Illinois leg is 266 NM, 66 imagine that, and can be finished in a couple of hours depending on which aircraft you choose and how you like to fly, fast, slow, in circles etc.

Along the way you may encounter some terrain anomalies, this isn't caused by this file but the sim itself. You may wish to try and use Elevation Fixes - United States by Alpine Scenery found on this site. It corrects not only those you may see here but in your other flights as well.

Standing on the Corner Park

STATS:
366 NM
339 waypoints
Enjoy your flight and get your kicks above Route 66!