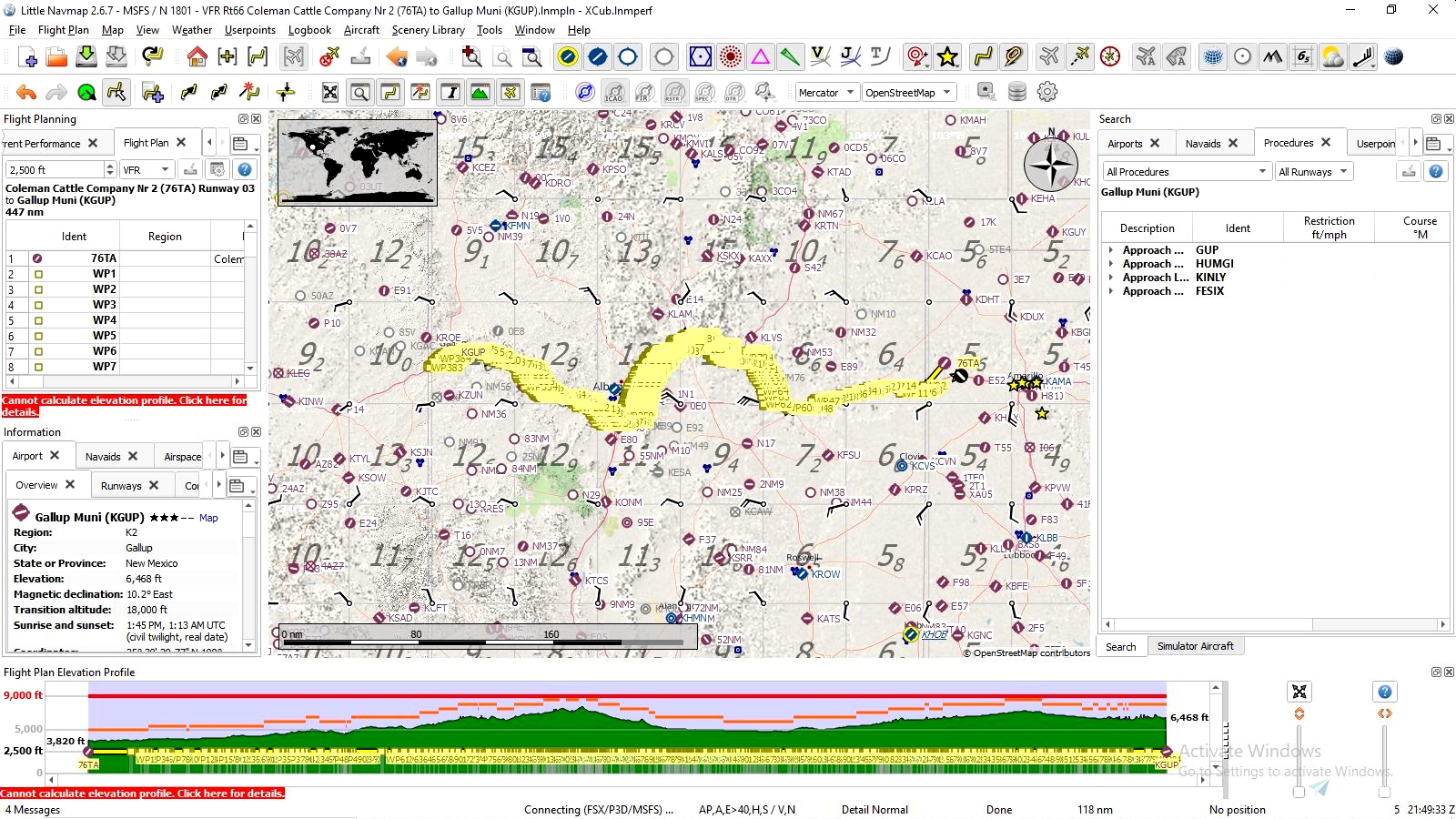 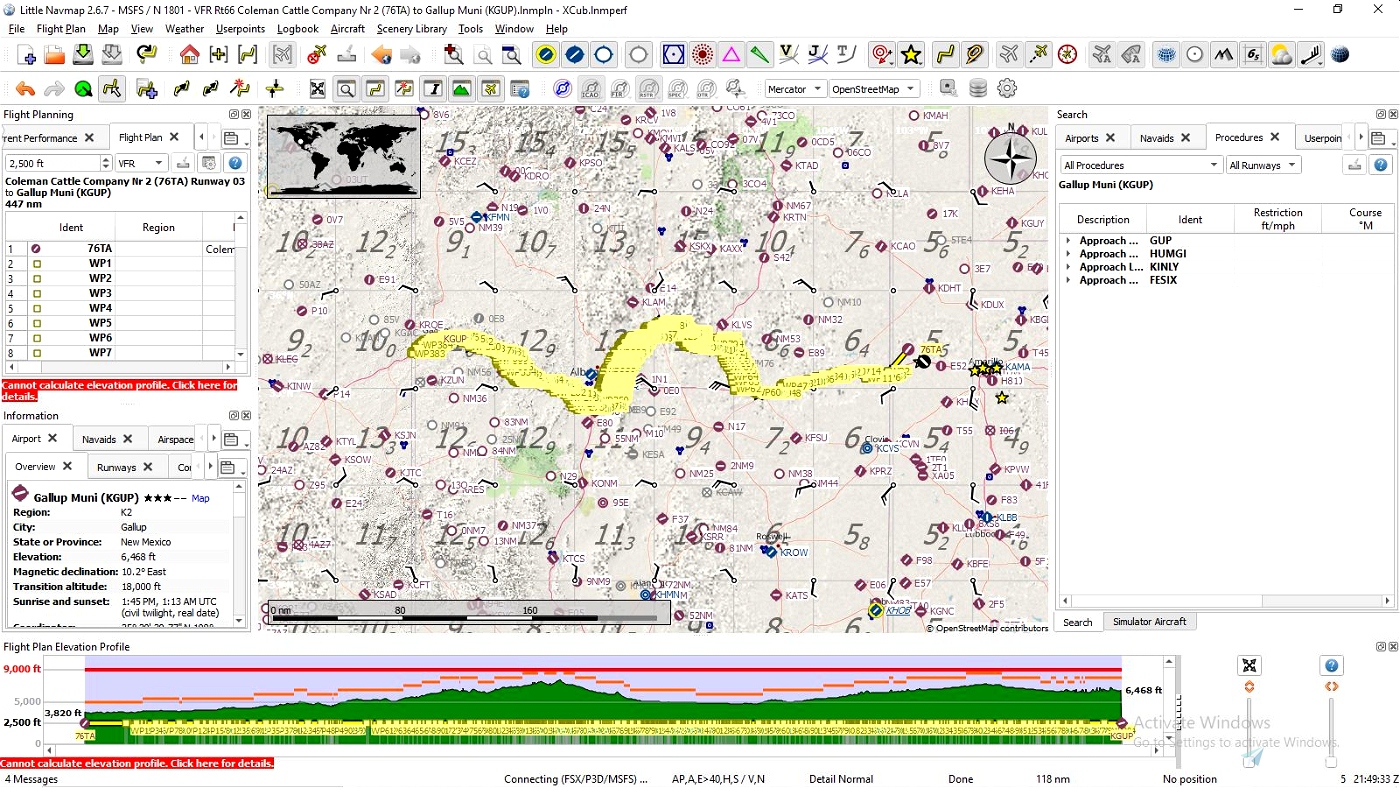 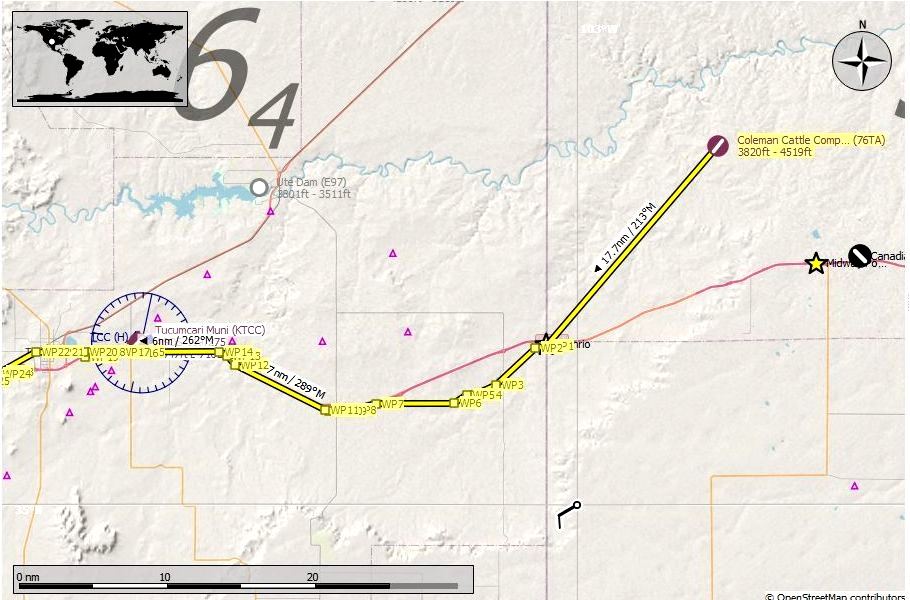 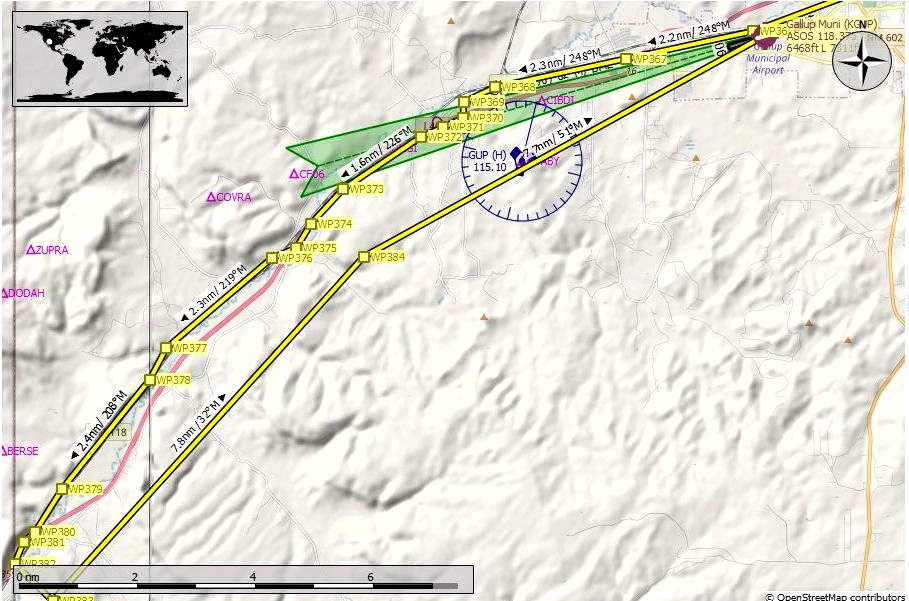 New Mexico "The Land of Enchantment". New Mexico has a varied landscape from mountains/mesas to flatland's, large caverns, canyons some containing springs with little lush forests, shaded oasis's to get away from the heat of day. At night cold air can flow down these canyons from the mountains above like little arid rivers drawing the Mule Deer in to graze. The night sky, full of stars many who live in big cities may never get the chance to see it's brilliance. Given the opportunity to go camping, hiking or a roadtrip, do, you won't regret it.

After getting our fill of steak at 76TA Coleman Cattle Company, we'll leave our generous hosts behind and fly to WPT1, Glenrio on the Texas - New Mexico border. From here you'll fly south of I-40 till it meets up again with the interstate and into San Jon. We'll crisscross I-40 many times along this journey. Outside of San Jon you'll turn to the northwest for a ways till WPT14 heads due west along the outer road of I-40. At WPT20 we'll be north of the interstate, the lake off to the north is the Tucumcari Lake Wildlife Management Area, just past the lake is Tucumcari. We won't have to worry about taking any back roads so we won't get weighed, some of you might know what I'm referring to, if you do post it in the comments...lol.
Just outside of town WPT22 goes southwest until crossing south of the interstate at WPT23. Fly along the south road till WPT33, cross to the north again and fly in between the Union Pacific rail line and I-40. You'll meet up with the rail line throughout this journey as well. WPT47 turns southwest for a short ways. WPT53 is Santa Rosa, here you'll fly over the Rt66 Pecos River Bridge leaving town WPT54. From here fly northwest then west to WPT61, Vegas Junction. At this point head due north away from I-40. This will take us along the original route pre-1937 alignment. After 1937 the route continued straight following what is today I-40 probably to bypass the more mountainous areas and a more direct route. We'll fly along, on our journey, the more scenic route. If you were to keep flying along I-40 you'd meet up again at WPT237 of our trip, so the realignment really cut out a long stretch of road! You can get a really good idea just how much that is if your following with Little Navemap pause and zoom out.
From WPT61 head north, northwest all the way to WPT75 just south of Las Vegas, NM. There isn't much along this stretch other than scenery and no towns other than Dilia to make note of. You'll turn back to the southwest from here till WPT80 goes west WPT89 has us flying northwest again. At WPT99 go north, to the east of WPT103 is the Pecos National Historic Park. WPT104 to the west is the Pecos State Monument, continue north and a small ways northeast to WPT107, the town of Pecos. Here you'll turn to the west, southwest and at WPT117 fly northwest making our way towards Glorieta WPT121. We're going to get off course at WPT129 and fly north to WPT130 and meet up with the Old Santa Fe Trail, some accounts say it was an old alternate route of 66 so we'll go that way, a good reason to avoid I-25, hope you don't mind but I'll avoid the interstate any chance I get lol. We'll fly northward where WPT152 will rejoin with what is considered today to be the official section of Route 66. To the south of WPT's 152-154 are several Santa Fe museums and the Botanical Gardens. Continuing on through Santa Fe, west of WPT157 is the State Capitol grounds. Flying a short loop around the capitol area brings us to WPT163, to the north is Santa Fe Railyard Park, to the north and west of WPT164 is the New Mexico School for the Deaf and bordering Fairview Cemetery. Just beyond is the Santa Fe Indian School est. in 1890 to educate Native American children from tribes throughout the Southwestern United States.
At WPT168 you'll turn back west and do a loop around KSAF Santa Fe Municipal Airport and join up on the south outer road of I-25 then at WPT179 veer off from the interstate. Many Pueblo live here, I'll put a link below to a NPS Route 66 site telling some of their history and presence today. Continue on to WPT215 and back to I-25. Between WPT's 215-225 to the south are several mining areas. WPT's 225-229 is the city of Bernalillo.  Flying on we come into Albuquerque starting at WPT233. WPT's 238-239 to the east is the Civic Center, 66 went through here but is no longer there today so we'll fly straight over and continue on the other side.
We finaly meet up with I-40 again at WPT237 which is the interstate we had been following close by from the very beginning of this leg. Pass by the Albuquerque Rail Yards to the east just before crossing the Rio Grande River at WPT240. From here fly south to WPT260 where you'll turn west. North of WPT263 is the Facebook Data Center in Los Lunas, who knows what all is kept in there. From here we make a winding journey all the way to WPT291 just outside of Laguna, the sharp turn in the road here is known as "Dead Man's Curve". Make your way to Villa De Cubero WPT312, it told Earnest Hemingway wrote one of his classics here, "The Old Man and The Sea".  Onward we go to WPT349 and cross the "Continental Divide", I'll provide a link if you wish to read up about it.
We're getting closer now, but not quit there yet! Continue flying north northwest where at WPT356 you'll turn west and start to enter Gallup at about WPT358. Keep on going till finally we we reach the border with Arizona at WPT382! Backtrack and fly roughly 15 miles and land at Gallop Municipal (KGUP) this will be the largest airport for a layover since leaving Lambert Field (KSTL) in St. Louis. You'll have to get yourself a room at a nearby hotel before heading out again through Arizona on our journey to the California coast.

Plan on doing the entire trip through New Mexico all at one time, trust me, if you save the flight while your flying and want to resume later you can, only you won't have any way points to follow since it only loads the flight where you left off and that's it! This can be finished in a couple of hours depending on which aircraft you choose and how you like to fly, fast, slow, in circles etc.

STATS:
447 NM
384 waypoints
Enjoy your flight and get your kicks above Route 66!