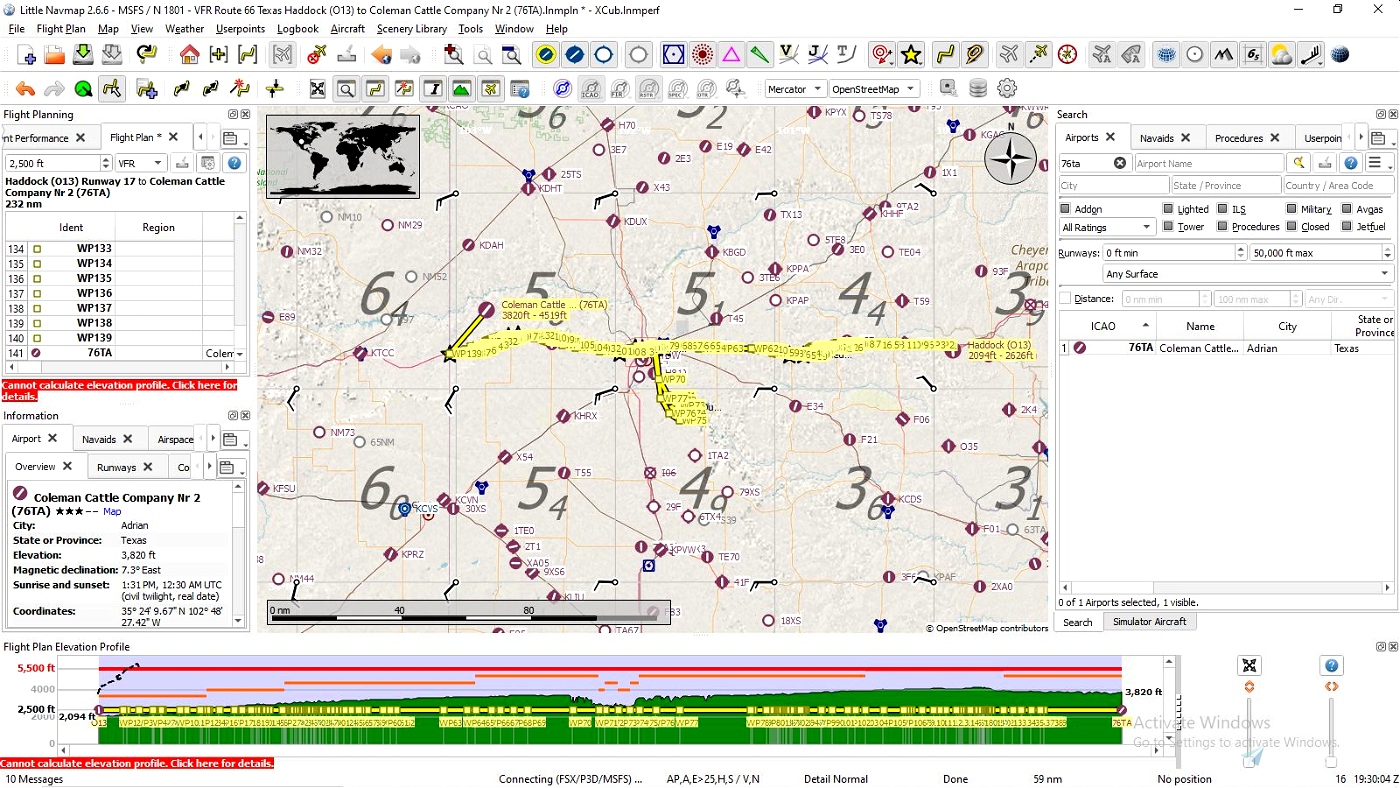 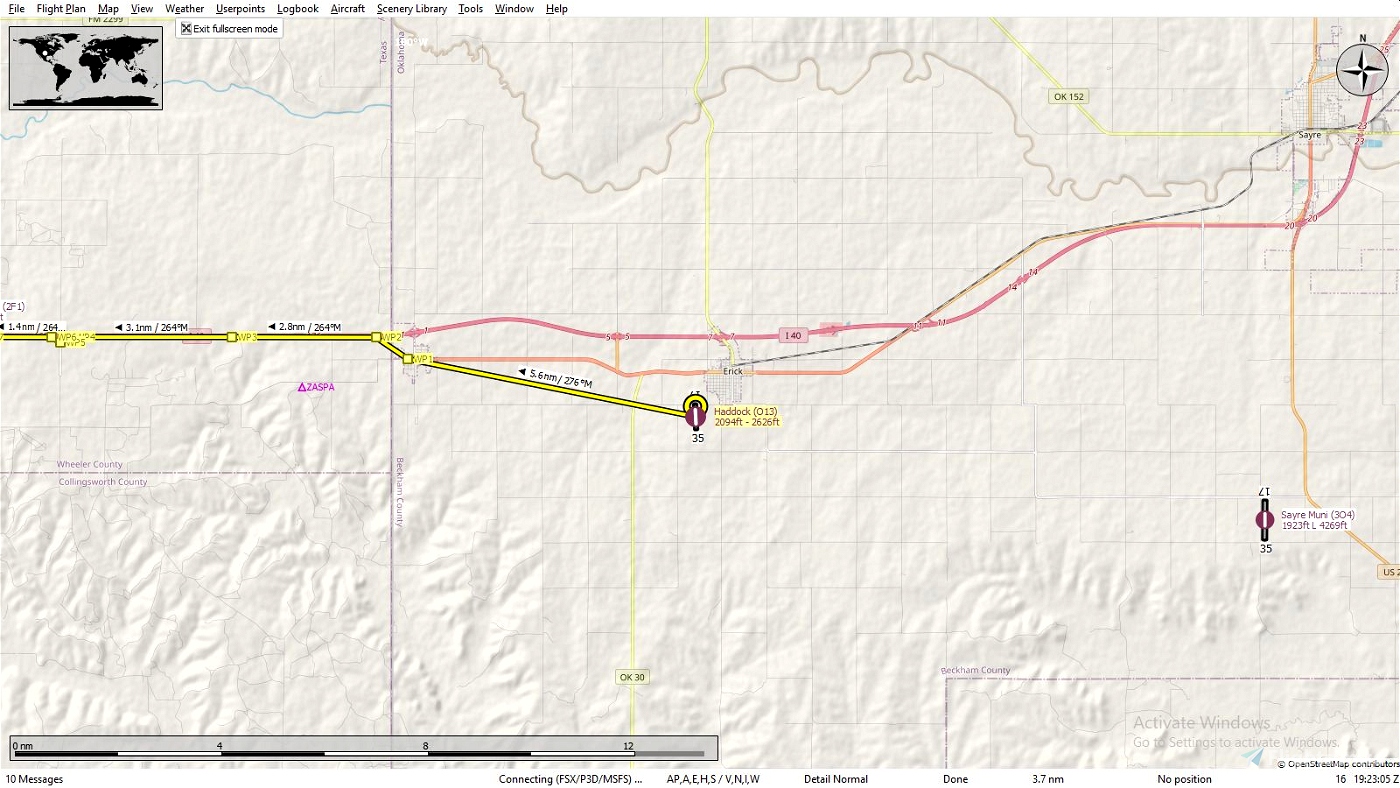 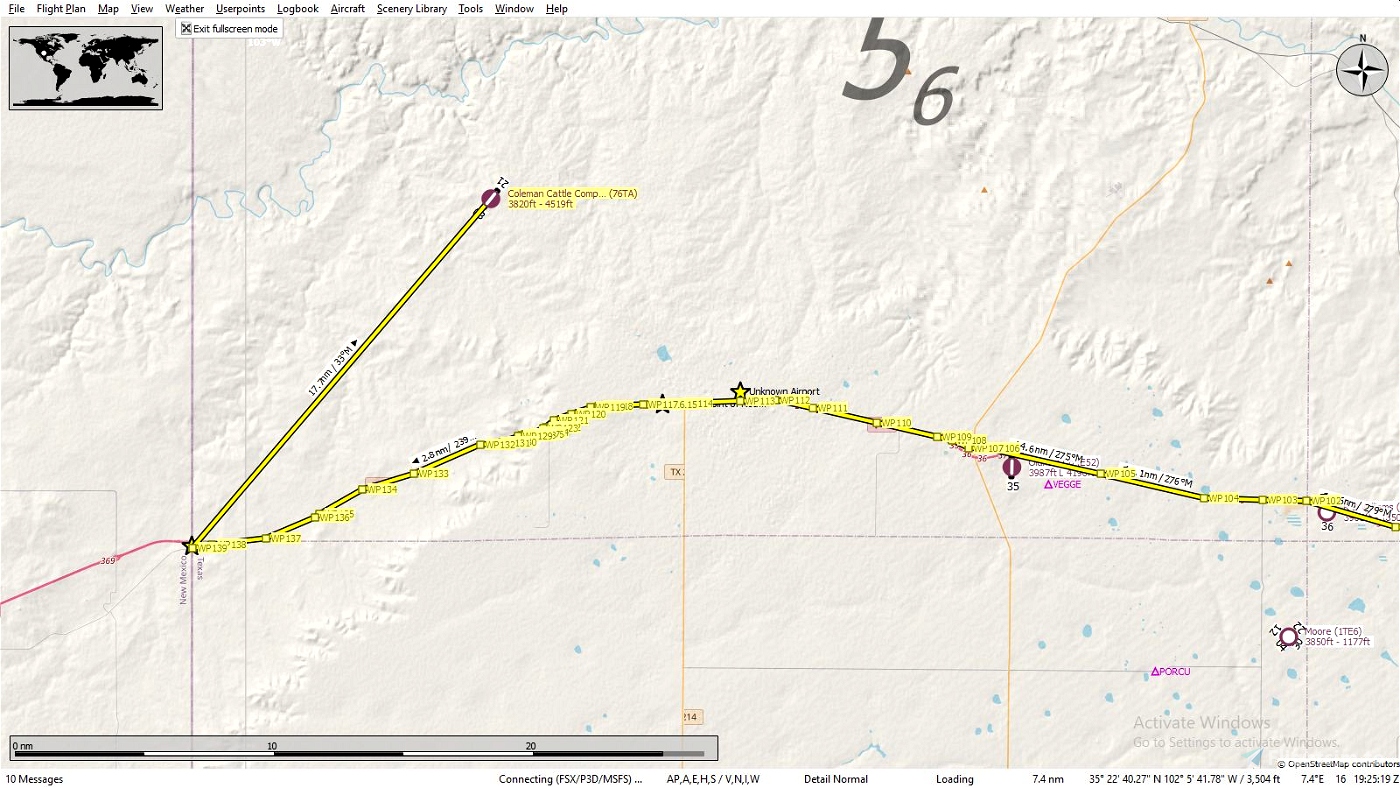 Texas is the fourth leg of our Route 66 journey. Beginning in Oklahoma at Haddock Field (O13) in Oklahoma we'll backtrack a short distance to the Oklahoma, Texas border to the town of Texola.
WPT2 is the first WPT in Texas nothing really here, just the first one. Flying west along the Spur 30 on the south side of I-40, WPT10 is the first town we come across Shamrock. Leaving Shamrock keep traveling along the southern route till WPT17 in north of the interstate. At WPT20 you'll enter the town of McLean following West 1st Street which was Route 66 through town. Once outside of McLean continue a short distance till WPT24 will take us a sharp turn back to the southeast WPT25 will head south and then back west at WPT26. This will zig zag all the way to WPT35 Alanreed.  Leave Alanreed behind and WPT37 finds us back at the interstate flying above the road to the south, Rt66.
In the area of Rockledge, WPT49, much of old Route 66 is located on private property and whats left is mostly dirt road now. This will go on until at WPT54 there is a small patch of paved road, but the original route is gone now so we'll fly over a vast wind farm till we pick 66 up again at WPT57 and run along I-40 some more. At WPT60 you'll start to enter Groom another small Texas town.
Travel south of I-40 till you cross over to the north side of the interstate at WPT65. The junction at WPT66 goes in several different directions. The interstate, I-40, continues a short distance before heading southward and back west of Rick Husband Amarillo Int Airport (KAMA). To the northwest is East Route 66 which bypasses the airport to the north, but we are going to take it straight through on Northeast 8th Ave till it ends at the road heading north Ave. B. Continue straight on through, following the plan, you will fly right over the airport and pick up Route 66 on the other side. That small stretch of Route 66 that disappeared now lies underneath Amarillo Int Airport, so we just went ahead and took the liberty to fly the route through here despite the airport, I'm sure they won't mind.

At WPT69 we're going to take a little detour off Route 66 and see the "Grand Canyon of Texas" Palo Duro Canyon. If you ever get the opportunity to go see it, it's a great place to visit and take a break from the drive, flight, or bike ride, whatever mode of transportation you might to be using.
This little trip took us a ways away so we'll have to backtrack to WPT78 and continue on into Amarillo by morning, I know, I know, sorry little dad joke there, for those old enough to know the song anyway. You'll follow East Amarillo Blvd. to WPT80 and turn south. WPT81 will take us back west, to the east is the Amarillo Civic Center and Hodgetown Stadium. The block south of WPT87 is the Route 66 Historic district with shops, YMCA and park. WPT89 to the north is the Amarillo Country Club. Continue to make your way through Amarillo till WPT97 the famous Cadillac Ranch. I'll provide links below for some of the sights along the way. Back to WPT98 to continue onward for a pretty good stretch, not really much of note through here.
WPT106 takes us into the town of Vega. To the north of WPT113 is a private airport not in the sim, Canadian River Ranch Airport (46XS). I might do this airport and add it to the uploads, until then anyone that wants to do this one feel free.
WPT114 is Adrian. Adrian just happens to have a special designation, it is the midway point of Route 66. There's a marker at WPT115 and a line that crosses the road here. A report says the line might not be there now and what's there may have changed some, don't really know. Adrian is also the last town on this leg of the trip, but we'll continue on just west to WPT139, Glenrio is now a ghost town on the Texas, New Mexico border. From here you will fly northeast about 18 miles to Coleman Cattle Company (76TA) where arrangements have been made for you to rest up before the next leg, New Mexico. Hope you like beef, it's what's for dinner! I know, I know, couldn't resist.

Plan on doing the entire trip through Texas all at one time, trust me, if you save the flight while your flying and want to resume later you can, only you won't have any way points to follow since it only loads the flight where you left off and that's it! This can be finished in a couple of hours depending on which aircraft you choose and how you like to fly, fast, slow, in circles etc.

© SearchN - All rights reserved. Any reupload or redistribution of this file without the author's prior written consent is forbidden.
This Flight Simulator 2020 Mod was created by SearchN and shared in Third Party » Flight Plans for Microsoft Flight Simulator.