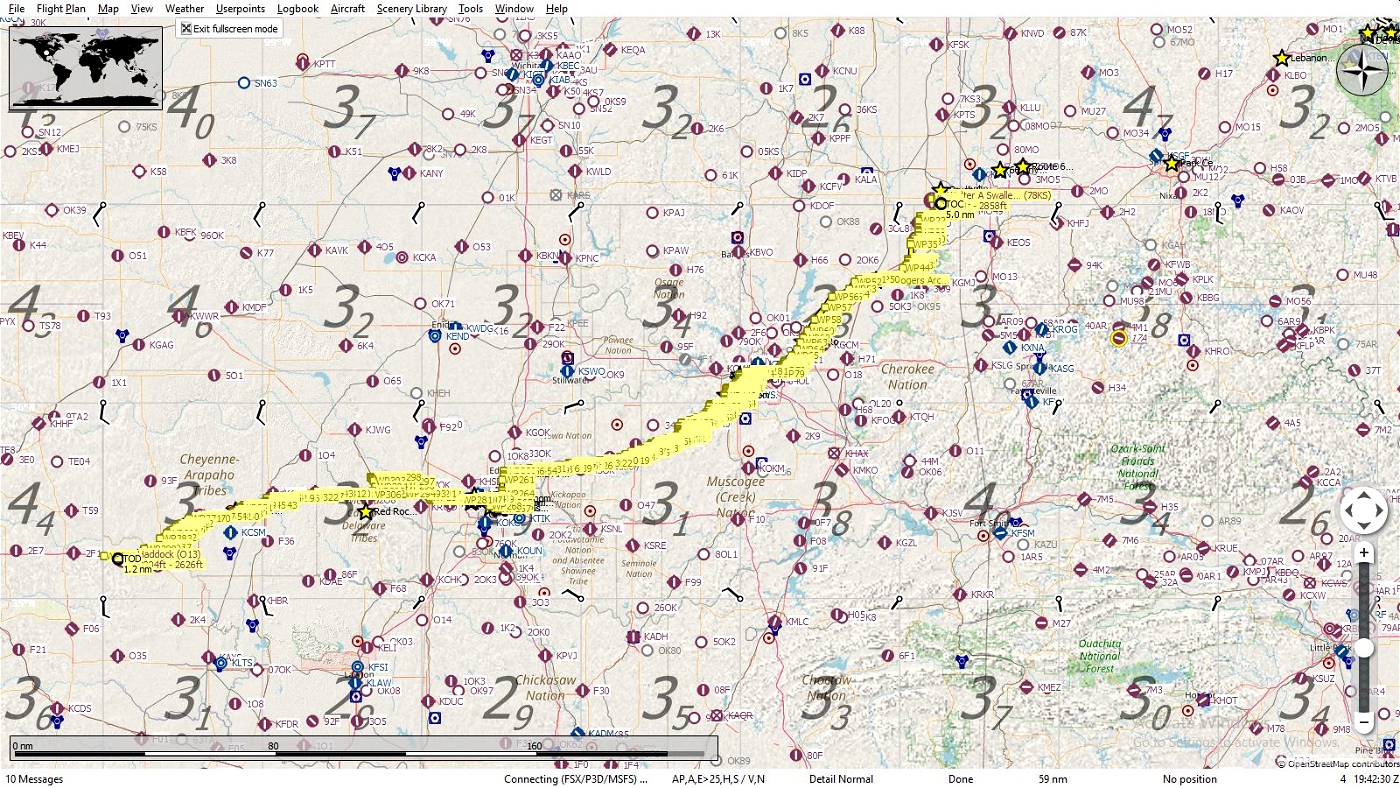 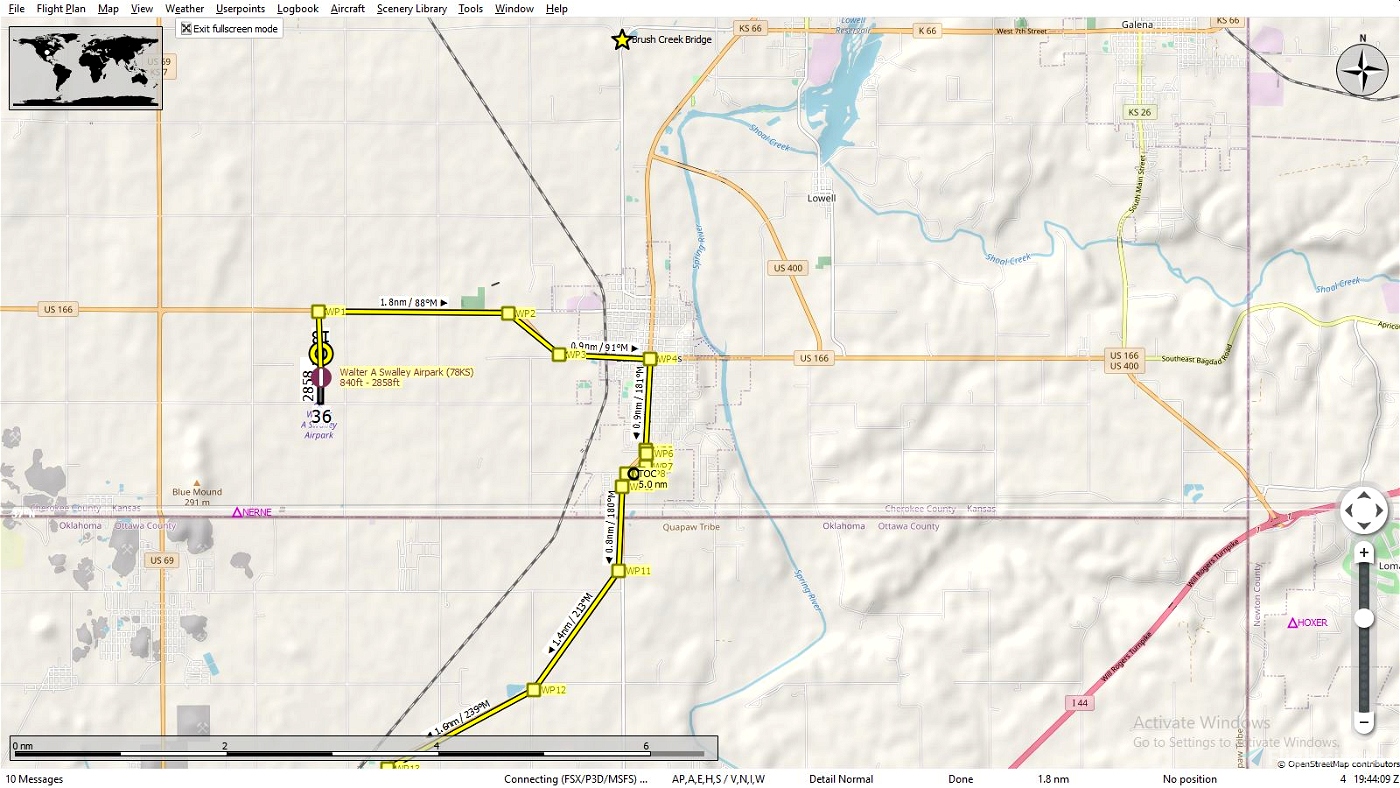 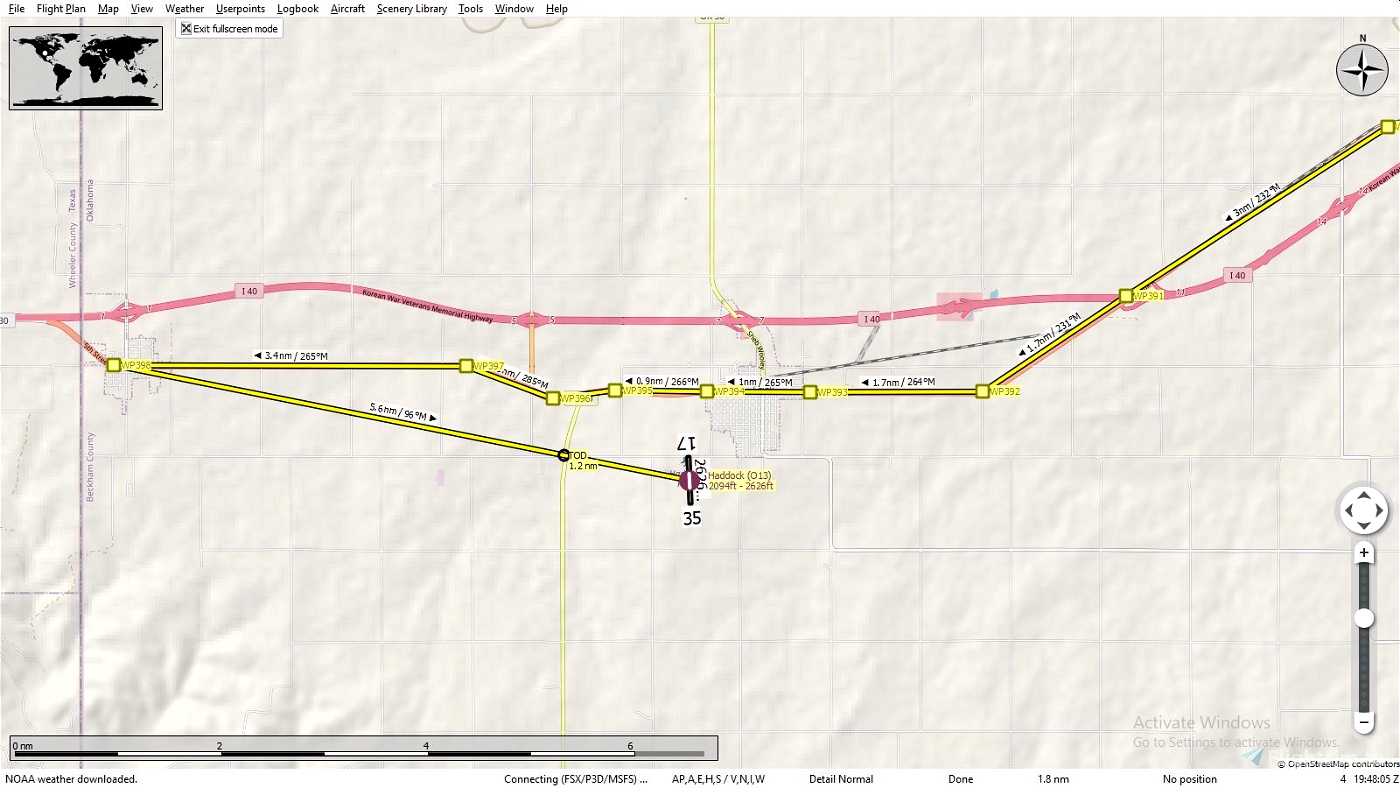 This is the Oklahoma leg of the Route 66 journey. Oklahoma is lucky in the fact it has the longest original stretch of Route 66 which in 1926 was around 430 miles in length. In 1937 the route was realigned and was whittled down to around 380 miles. Due to these realignments, the route in Oklahoma is quite complex in certain areas. Just like the other "Get Your Kicks Above Route 66" flight plans it's a combination of both the original and alternates depending on how much of the original route remains intact.

We'll begin our trip where we left off at Walter A Swalley Airpark (78KS) just outside of Baxter Springs, Ks. where we'll head back into town and pickup Route 66 into Oklahoma.
While researching into Oklahoma I came across a possible reason as to why Kansas only got 13 miles of Route 66, Cyrus Avery also known as "The Father of Route 66" was the creator of the route, it was he who determined where it went and where it didn't and it just so happened he was living in Oklahoma City at the time. It's thought he wanted the route to go through Oklahoma as much as possible for it's economic benefits so, geographically, Kansas just happened to get the short end of the stick.

Oklahoma added much to the history of Route 66 from cafes, drive-in theatres and roadside stands selling everything from Native American art to Frankoma Pottery. There's nothing that can replace taking a car and actually driving the route and seeing it up close, what would be considered the best of 66 is far gone now, there are still some glimpses to be had. I don't think it's possible to taxi the entire route so it might be best just to fly above it!

You'll fly over miles and miles of Native American lands. Their histories impossible to tell here so I'll just give some of the waypoints entering and leaving:
WPT11 is the first waypoint in Ok. and home to the Quapaw Tribe. WPT14 the city of Quapaw. WPT22 is where you'll be leaving Quapaw lands and be bordering your flight over the town of Miami, the Miami Tribe to the west, the Peoria are to the east, Ottawa south.
Just after crossing the Neosho River, WPT28 starts your flight over the Cherokee Nation. Fly southeast of WPT45 if you want a side trip to see Grand Lake O' the Cherokee. Between WPT's49 and 50 southeast on the interstate is the Will Rogers Archway. This is now home to shops and one of the worlds largest McDonald's. A must see if you get the chance to drive the route.
WPT78 is just north of Tulsa and where you'll leave the Cherokee and be over the Muscogee Creek.
WPT90 is the Cyrus Avery Route 66 Memorial Bridge, now closed, crossing the Arkansas River. Remember me telling you a little bit about him earlier? Just on the other side is the BNSF Cherokee Yard. Continuing on, somewhere near WPT114 in Sapulpa this is where world famous Frankoma Pottery was produced. Founded in 1933 and sold at many shops and gift stores along 66 some of the pieces have become quite collectable.
Near WPT199 is where we leave the Mucogee Creek Nation and cross onto the Sac and Fox areas, just beyond WPT222 to 247 goes into a brief stretch of the Iowa then the Kickapoo then back into the Iowa then on to sprawling Oklahoma City.
WPT265 is the Oklahoma State Capitol. To the north of WPT267 is the Myriad Botanical Gardens, south is Scissortail Park. WPT268 passes by the State Fair Arena and OSU (Oklahoma City). I believe we veered off course a bit through Oklhoma City but it's really hard to follow through here. We'll just pick it back up at WPT269 and enjoy the sights along the way. You'll cross the North Canadian River at WPT272, the big body of water ahead is Lake Overholser with Route 66 Park just south of WPT277 on the lake shore. I don't believe the Oklahoma City area is home to any tribes, but I may be wrong, doesn't appear to be on the map. I'll put a link to the one I'm using.
At WPT287 the trip into the Cheyenne and Arapaho Lands starts till the Canadian River between WPT's 305 and 306 crosses us into the Wichita, Caddo and Delaware Tribes. WPT314 at the interchange is the dividing line between the Wichita, Caddo and Delaware Tribes to the east and once again we fly back into the Cheyenne and Arapaho Lands to the west. Just north of WPT355 is the official ghost town of Foss, why? I'll just provide a link.
WPT368 is Elk City Municipal Airport (KELK) now closed, but you can land if you want. I won't say anything if you won't.
WPT383, is the town of Sayre, south of town we'll leave the Cheyenne and Arapaho Tribes and continue nearing our final destination just south of WPT394, but first we'll fly a few more miles to WPT398 Texola. After seeing the sights in Texola, backtrack 5.6nm southeast to our jumping off point Haddock Field (O13). This is where we'll stay till we continue our Route 66 journey into Texas.

Plan on doing the entire trip through Oklahoma all at one time, trust me, if you save the flight while your flying and want to resume later you can, only you won't have any way points to follow since it only loads the flight where you left off and that's it! This can be finished in a couple of hours depending on which aircraft you choose and how you like to fly, fast, slow, in circles etc.

LINKS:
Historic Route 66 Turn by Turn - Oklahoma
American Indians in Oklahoma - Oklahoma Historical Society
15 Ghost Towns of Route 66 this is where you can read about the town of Foss as well as some others.
Tribal Jurisdictions In Oklahoma the map used.
Little Navemap
Will Rogers Archway

SearchN replied Author
January 16, 2021
Reply
Thank you, glad to hear you had a good time! The airports just happen to be what's closest at the end of each leg and the departure for the next. Will release Texas soon.

© SearchN - All rights reserved. Any reupload or redistribution of this file without the author's prior written consent is forbidden.
This Flight Simulator 2020 Mod was created by SearchN and shared in Third Party » Flight Plans for Microsoft Flight Simulator.