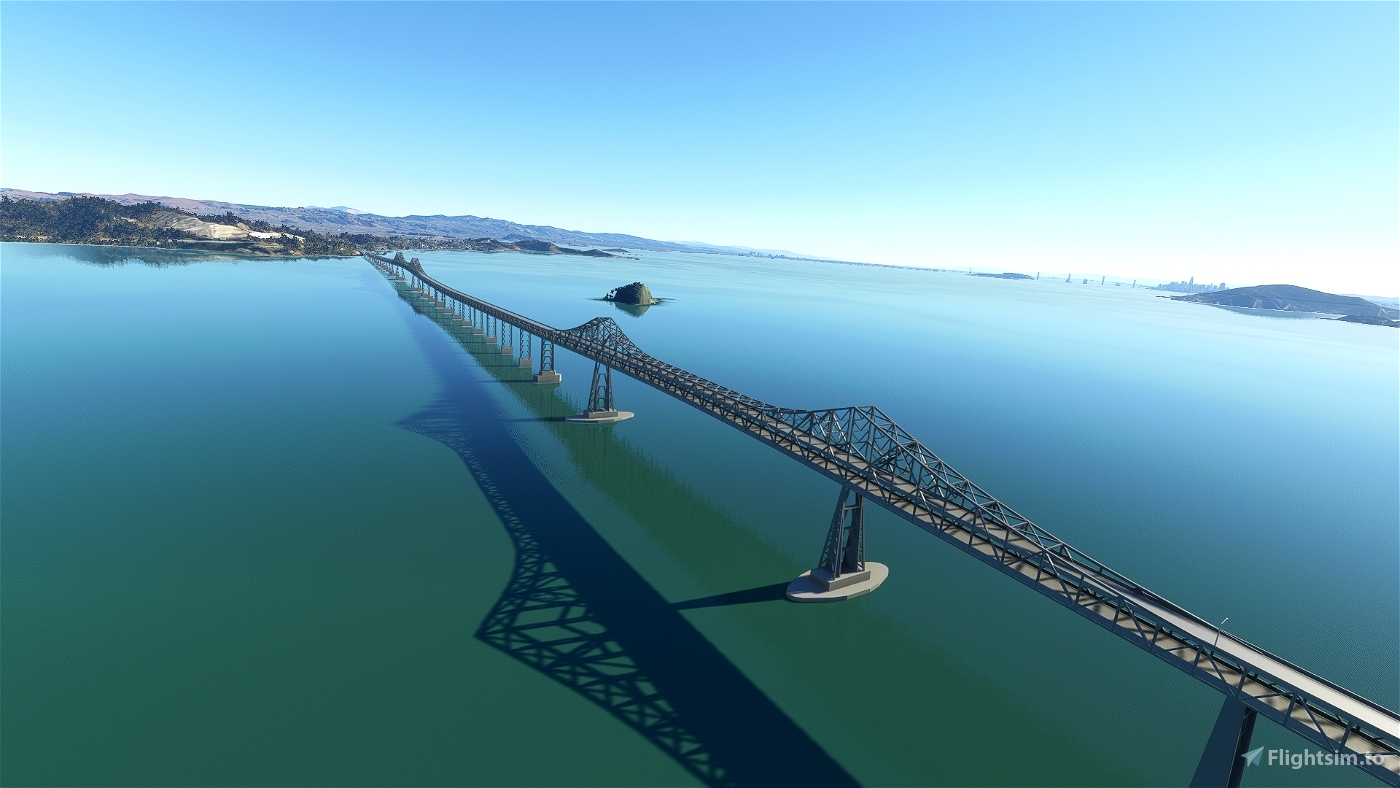 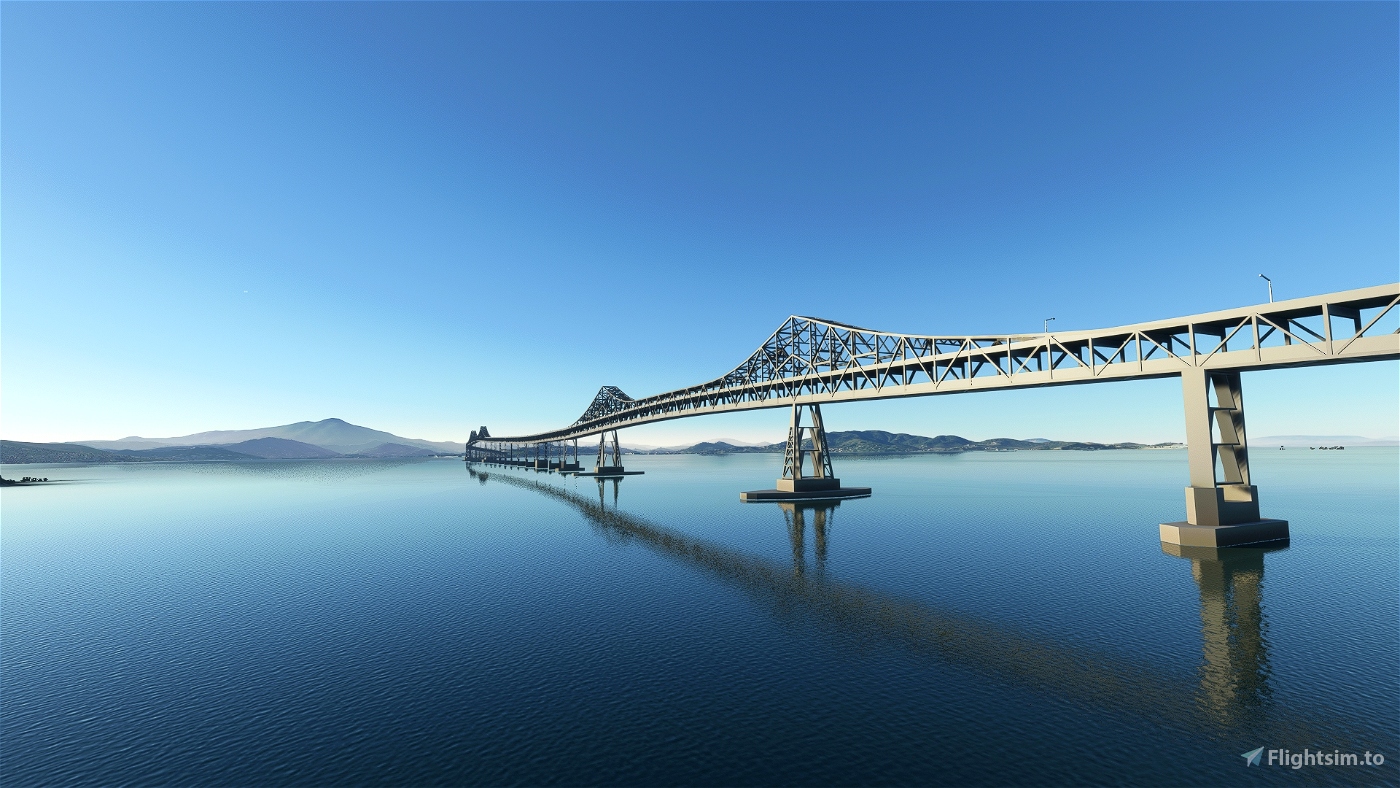 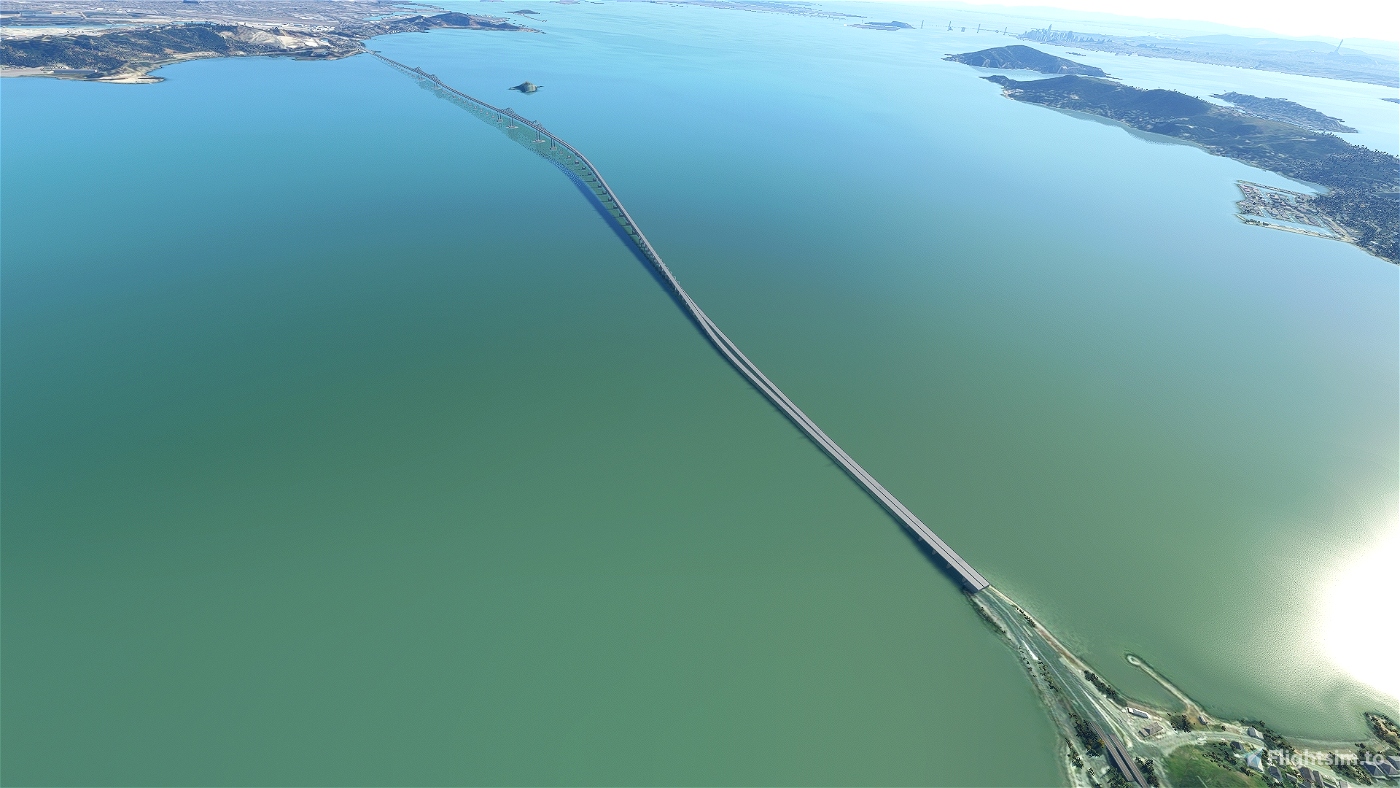 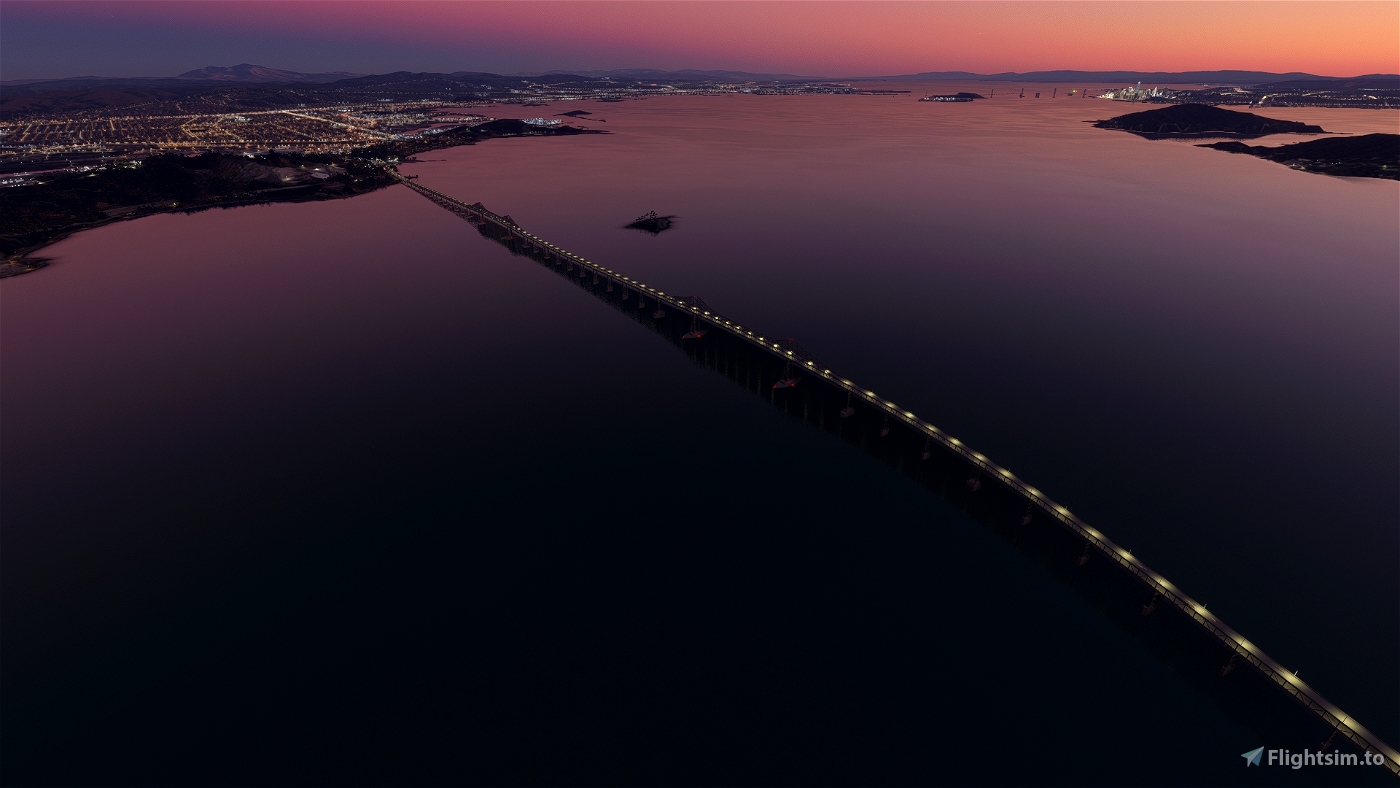 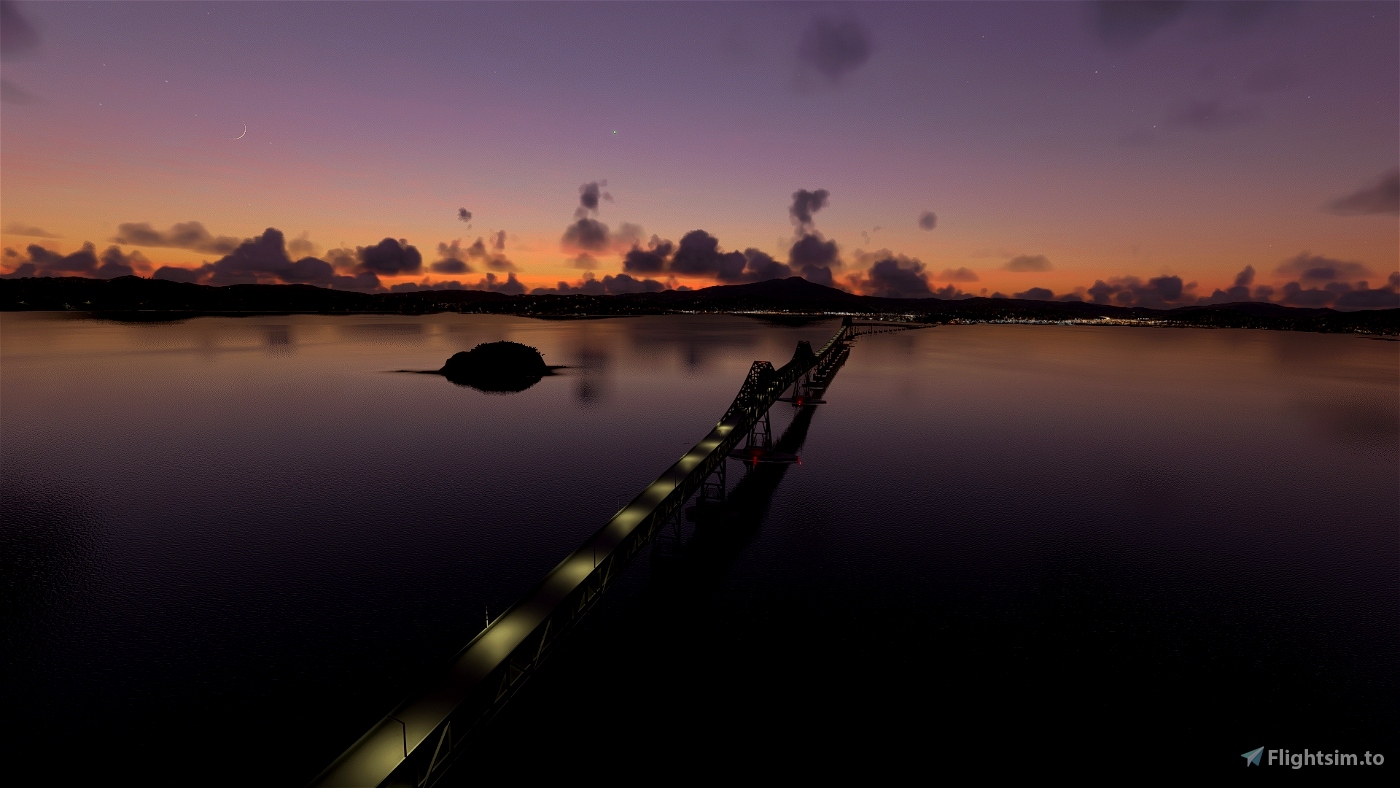 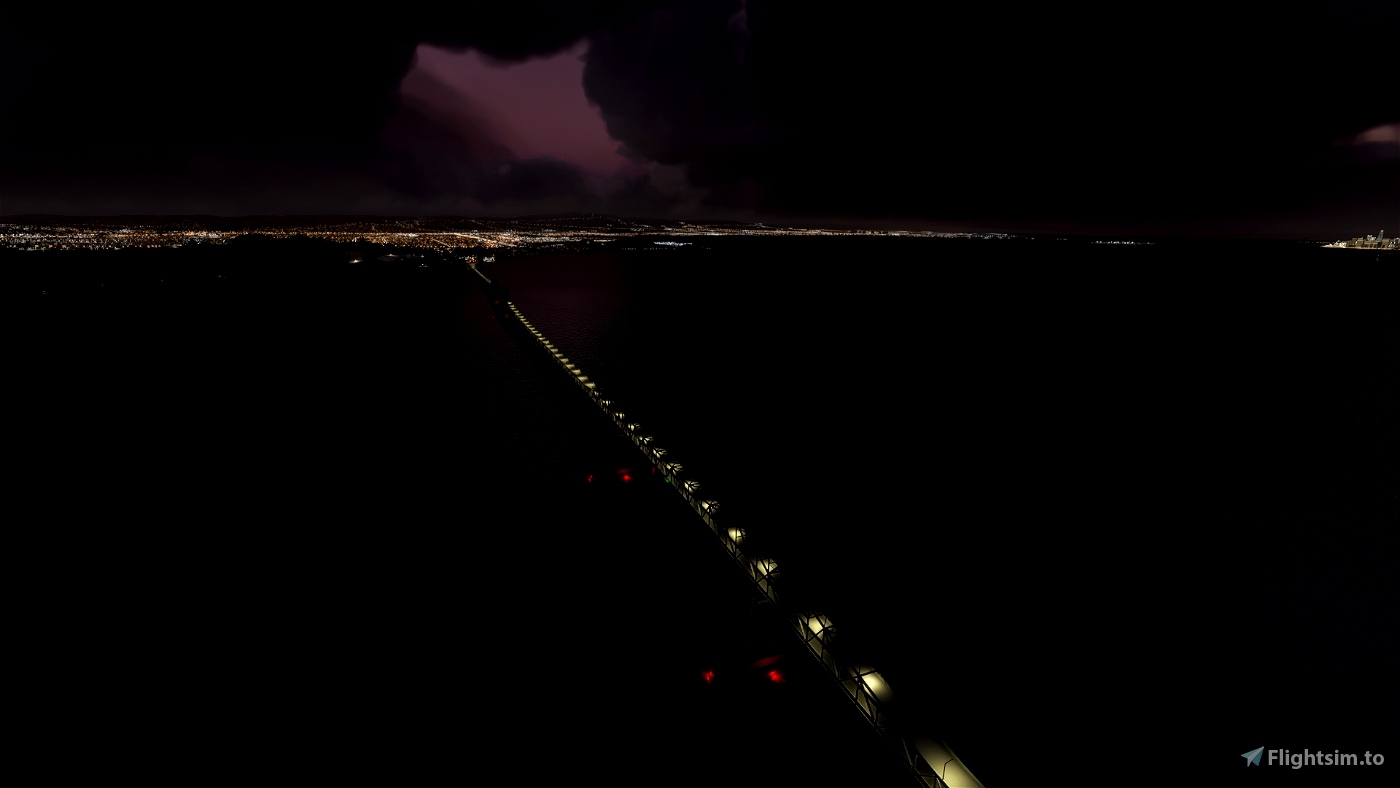 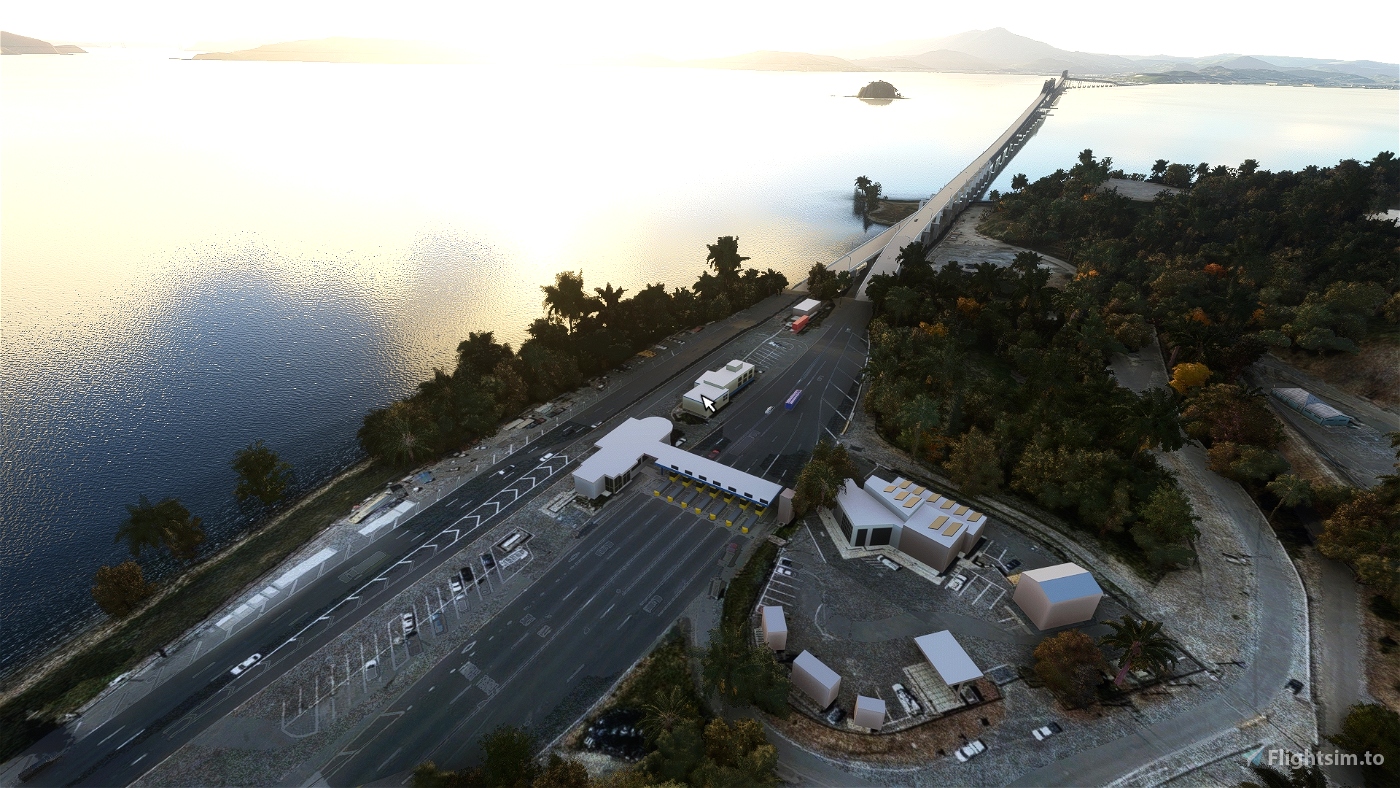 The Richmond–San Rafael Bridge, officially known as the John F. McCarthy Memorial Bridge, is the northernmost of the highway bridges that span San Francisco Bay. The bridge is a 5.5 mile long double-deck combination of girder, truss, and cantilever bridge spans. Opened to traffic in 1953, it directly connects Marin and Contra Costa counties between the cities of San Quentin and Richmond, carrying Interstate 580.

The bridge has a rather unusual design; because it crosses two separate shipping channels, it includes two separate, but identical, cantilever spans, providing 185 feet (west span) and 135 feet (east span) of clearance. This lends the bridge a unique vertical profile, with two distinct visible crests. Famously, the architect Frank Lloyd Wright called it "the most awful thing I've ever seen" and called for its demolition.

- Hand-modeled recreation of the Richmond–San Rafael Bridge (and its toll plaza just east of the bridge itself).

(NOTE: At present Flight Simulator seems to be having issues with traffic placement on the double-decker sections of the bridge. Westbound (top deck) seemed OK, but eastbound behavior was inconsistent and weird. But of course since the decks are right on top of each other, there's no way to solely exclude the problematic traffic. I ended up excluding traffic from most of the bridge so you don't have cars driving on the water and such, but will update if I'm able to find a good solution.)

- LOD models to reduce performance impact. Keep in mind this is a very long truss bridge, and even the LOD models are somewhat heavy compared to the other bridges I've made; I've done what I can to pare them down and still reflect the overall look of the bridge accurately.

- Some terraforming and vegetation tweaks around the bridge ends.

- This is the third of a few forthcoming bridge addons I'm working on for the Bay Area, since the default scenery still lacks proper models for everything except the Golden Gate and Bay Bridge. For those following along, the Carquinez bridges in Vallejo will be next; timeline won't be as quick as the first three.

- Download the ZIP file and extract the "whitearcades-richmondsanrafaelbridge" folder to your Community folder:

Other Scenery By Me

Other than that it's mostly amusement parks, but if you're into that...

Show your gratitude by making a donation. This mod was brought to you by JGelert. You may donate if you like.

These users have donated to TheWhiteArcades to keep him making awesome add-ons everyone can enjoy.

22 day(s) ago / Thanked by TheWhiteArcades

Thanks for your work on the wonderful renditions of Bay Area bridges. It seems the Antioch bridge needs some love also since the sim did a particularly poor job of it. Cheers!

BTW, I took a break from the bridges so I can get back on a bigger project I had been working on, but Antioch is at the top of my list once I get back to them.

1 month(s) ago / Thanked by TheWhiteArcades

Update: 5 days ago I had issues (see below), but when I retested today, flying an Asobo 172 G1000, I didn't have any problems. I retested with the plane I was probably flying a few days ago (Vans RV7, a great ride) and again, no problems. I have installed several new or updated mods in the last 5 days, including Water Fix - San Marin County. In the initial test I had rebooted after the initial crash and otherwise done my due diligence, so I don't know why the differing results, but I'm glad all is well now, and I can use this excellent bridge.

Sorry if my issues put anyone off, I can now highly recommend the Richmond bridge. It is very well executed and aligns well with the surrounding scenery.

This bridge's current version causes my sim to crash to the desktop when trying to depart from KSFO, during the loading flight phase. Confirmed through testing, though your previous two Bay bridges are working (and looking) great. The nearest mod to this bridge was your San Mateo Bridge (I don't have any in the north bay mods, San Jose airport is my northern most mod in the south bay area. The aircraft I used was tested and found to be operational from KSFO, if I disable just your Richmond bridge.

I'm sure it's just a minor issue, really looking forward to adding Richmond to my SF Bay, along side your other great bridges. Keep up the great work!

Glad to hear it's working well for you now!

How about the Coranado bridge in San Diego??

I couldn't remember whether the (very good) LatinVFR payware scenery for KSAN had touched the default Coronado bridge along with the other downtown landmarks, but it appears it does not. It's not as bad as some of the ones I'm currently working on replacing, but it's still rather glaring, especially at night. I'll put it on my to-do list, though I can't promise a particular timeline.

Also, if you wouldn't mind opening a scenery request for the bridge, that would help greatly!

Hope the downloads work again soon on this site so I can download it, right now I cant download anything as it brings me to a forbidden page. Looking forward to using this

Thank you SO much for working on these bridges! I lived in Benicia for a long time and seeing the monstrosity while flying around there was always tough... Same with the bridges you've worked on so far. Much appreciated!

Stunning! Is it possible to combine these SF and SM bridges into one mod?

Might look at combining them into a single package when I have finished making the full set of bridges. Still planning to do the bridges in Benicia and Vallejo. It's definitely easier to have just one thing to download and put in the folder than 5.

I got really drunk one night about 30 years ago up in north bay and had to walk back to Hayward on the 101 and across this bridge. A bus driver picked me up half way across and dropped me at BART station so I could catch a train home.