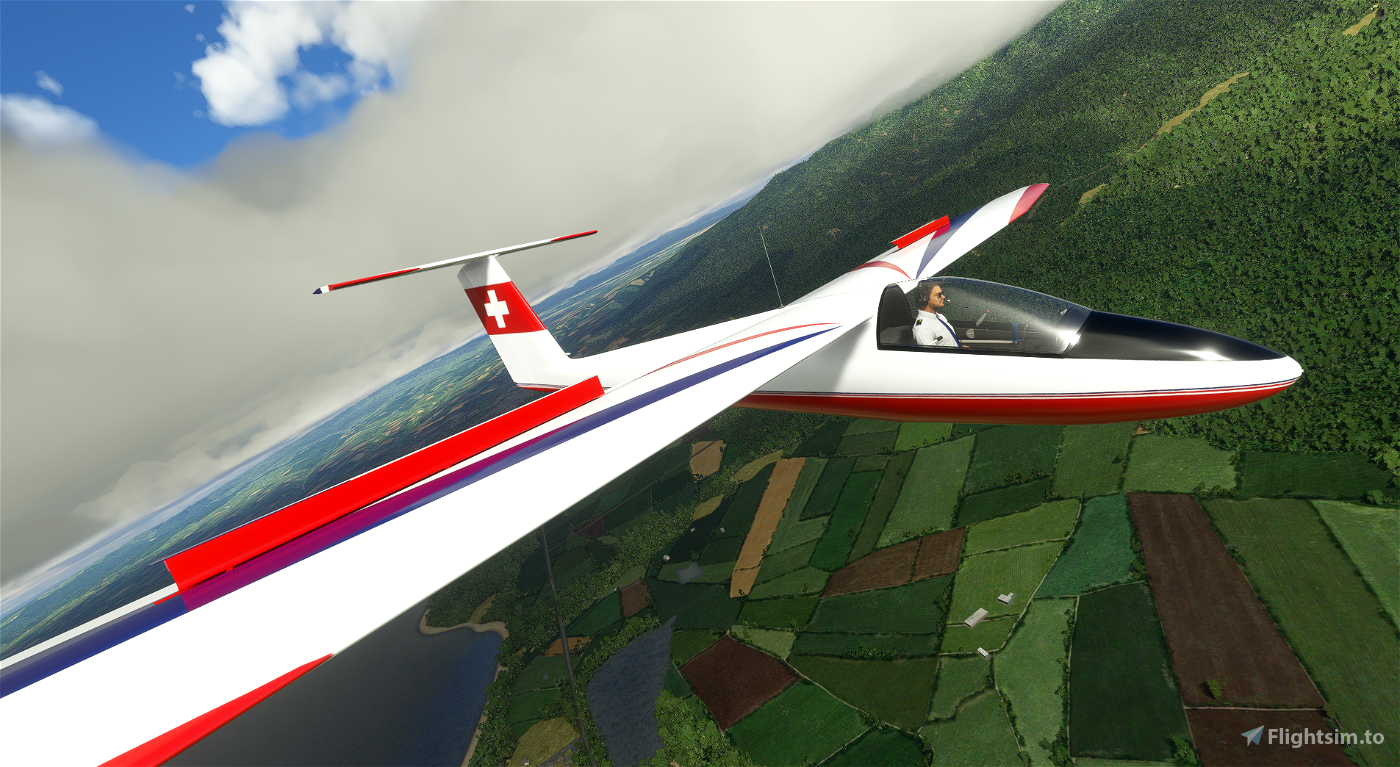 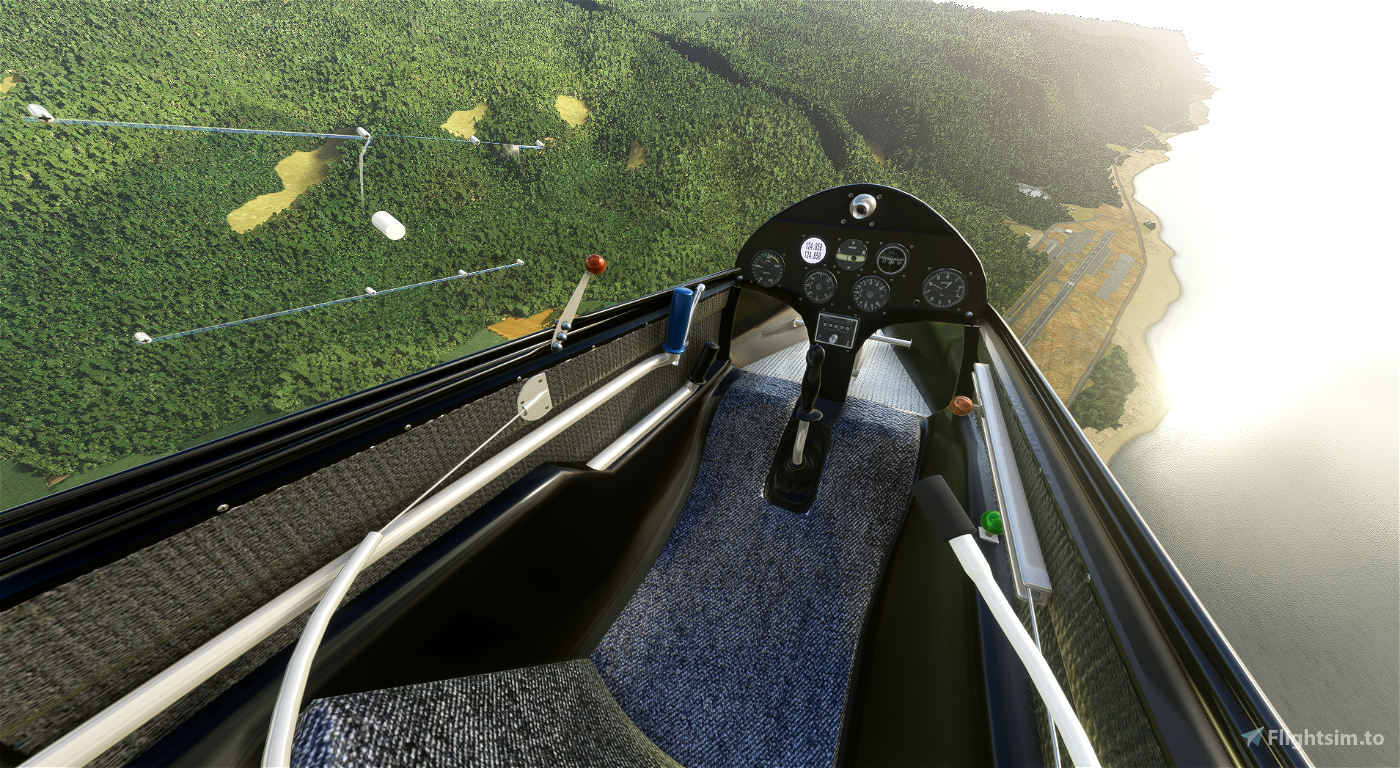 The B-4 Glider is a Standard Class glider permitted to fly a number of aerobatic manuevers.

NOTE: This is an alpha test version and all features are not final. Please leave feedback in the comments.

Unfortunately, the author decided to temporarily disable this file. This may be because this add-on may no longer work, is not longer supported or may need to be updated first.

These users have donated to Jonx to keep him making awesome add-ons everyone can enjoy.

thanks for all your help Brandon! john

I just flew in Hawaii with the EA-7 Edgley Optica. Do you know how FREAKING COOL it was to fly in Hawaii in this? This weekend I will fly in VR in Germany, London, France. Thank you so much

Nice plane.! Would love to see a cat livery. And maybe some other plane liveries but very good job.!?

Doesn't fly at all, just falls like a stone for me. SU5 issue?

since you explicitly ask for feedback in your comment to mazex, I will give you my two pence. Let me start with a disclaimer: I have no flight experience in real life. I have been flying the Flight Simulator since FS3, but that's my only source of knowledge/experience.

I think it would be unfair to rate your plane at the moment as it is clearly work in progress. I really appreciate what you did with the Discus-2b and if this one becomes just as good, I'm looking forward to flying it. It sure does look good already. I think that you get less feedback on this glider than on the Discus is because that one was one of the first gliders to appear. Speaking for myself: I jumped to the occasion to try out the experience of a glider in the new Flight Simulator, but now that we have your Discus-2b, I'm not as interested in another glider until Asobo improves the support. I know we can get tows and thermals from Kinetic Assistant, but flying on manually placed thermals does not feel right, so until Asobo comes with realistic, dynamically generated thermals, the glider adventure is on hold in my view.

Regarding your plane: Several knobs and some instruments don't work yet, but I'm sure you already know about that and guess you plan to add those later anyway, so that's not really useful feedback for you. In particular, there are no tooltips on the instruments, so to be honest, I'm not really sure what the bottom instrument (with 5 numbers) might be. At first, I also thought that the variometer (or VSI? the left one of the two) did not work (yet), but then I found out that the meter was just hidden behind the casing if maxed out.

I really like the "Release cable" button. I haven't seen that button in any other glider model yet (off-topic: just like the waterrudder on float planes; it's a bit disappointing that you can only lower it through the keyboard and there is no indicator in the cockpit to show that it's down, so you can only confirm it through the external view, which violates the realism), but it's a really nice touch to be able to realistically do this with an actual button in the plane. It does seem to do something, but I haven't tried out if it works with Kinetic Assistant yet.

It would be nice if it would be possible to operate the sliders from the virtual cockpit too, not just by assigning the spoiler axis to the joystick. I don't believe your Discus-2b allows that either, but the Madolo AS 33 Me (also on flightsim.to) does allow that for all sliders in its cockpit and that's a great option too...

I saw some others comment that the B4 flies like a brick and sinks too fast, compared to the Discus-2b. As I said, I don't have any real-life experience, so I would not be able to comment, but personally I was afraid how easy it was to gain height with both the Discus-2b, but also with this B4 glider, when flying in mountains. When I fly (in MSFS) with some wind through the mountains, I tend to gain height on average without paying too much attention to which flank of the mountain I follow. Usually I can just fly straight to my destination: sure, I do go down at times too, but then I tend to hit a severe updraft again somwehere and gain enough height to remain airborne anyway. In fact, I usually find it harder to lose height and land at the airport than the other way around, so my (uneducated) guess is that the sink rates may rather be too low rather than too high.

Finally, the most real feedback I can give you concerns the compass: as is the case with the Discus-2b, the magnetic compass turns the wrong way around. It does display the correct number at the line indicating your heading, but on a real compass the numbers should increase from right to left, so the line would seem to move left if the airplane turns right and vice versa. That's because you look at the back of the compass disk, which remains stationary in the Earth' magnetic field, while the airplane turns around it. Check out the magnetic compass on any of Asobo's airplanes to see what I mean. It's a detail, but being a sailor myself, I do have real-life experience with compasses 😉.

I hope this helps you and thanks again for your great work on these models. It is highly appreciated. They are great!

P.S. I only installed your plane áfter SU5 and it does seem to work alright, so I think I can say it is compatible with SU5.

Thank you VERY much for bringing this plane to MSFS!

This was actually my first single seater that I flew way back IRL 😊 Sitting in that cockpit in VR makes me feel like 16 again 😊 The model is very well done!

I know this is 0.1 but just a few comments anyway:

* If possible in the future - a distinctive feature of the B4 is the metallic clunking in the wings when applying G in any direction. That would be nice...

* It feels like the ailerons are a bit to effective? Many years since I flew it but to my memory it is VERY responsive in the pitch axis but rather docile in the aileron axis... And they are actually working at zero speed as well. But I guess that might be a problem with the default simulation engine? IRL the pitch response actually feels a bit unrealistic - nudge the stick a bit forward and you get negative G immediately 😊

* The sink rate is excessive right now (as I guess you know). At 110 km/h I end up with ~1.5 to 2 m/s sink. In MSFS where you can fly at your old childhood airport where you know the circuit blindfolded it gets rather obvious that you hardly manage the standard pattern even withous brakes on the final 😉 But I have not installed the Kinetic Assistant so that may be a standard behaviour with gliders in vanilla MSFS?

I can't thank you enough for your comment! This project has been reviewed WAY SLOWER than when I released the Discus-2b. It seems nobody is sending any feedback. Feedback, as you know, creates a more realistic aircraft. Because of this feedback, I have something else to work on and not just the "Sink Rate". It sounds crazy, but I don't like pushing small updates out. Because of your feedback I'll have enough content to fix for version 0.2. Thanks again!

How do you call a tow plane when starting on a runway?

You need to use the Kinetic Assistant app. Here's a video demonstrating it.

Ah! OK - I have a few paintschemes ready that I developed for my 1/5 scale RC model and was thinking of trying them out.

The download says "Paint kit included" - where do I find this please?

Sorry that's an error on my part, simply copy paste error. Paint Kit will be coming out, but probably not until the Beta phase.

Thank you! Still in Alpha as stated and it will only improve 😊 Thanks for the feedback

Ahhh fantastic !! A new Glider..So happy you created this little gem..I will fly it the comming day.s and give you some feedback.For now,it looks great i like the cockpit you made.So speak to you in a few day.s ok..greetings Andre

Kept it basic, kept it simple! Not only for the purest form of silence and old school flights, but also for MSFS' FPS! Very friendly on the graphics card and VR looks stunning and smooth.