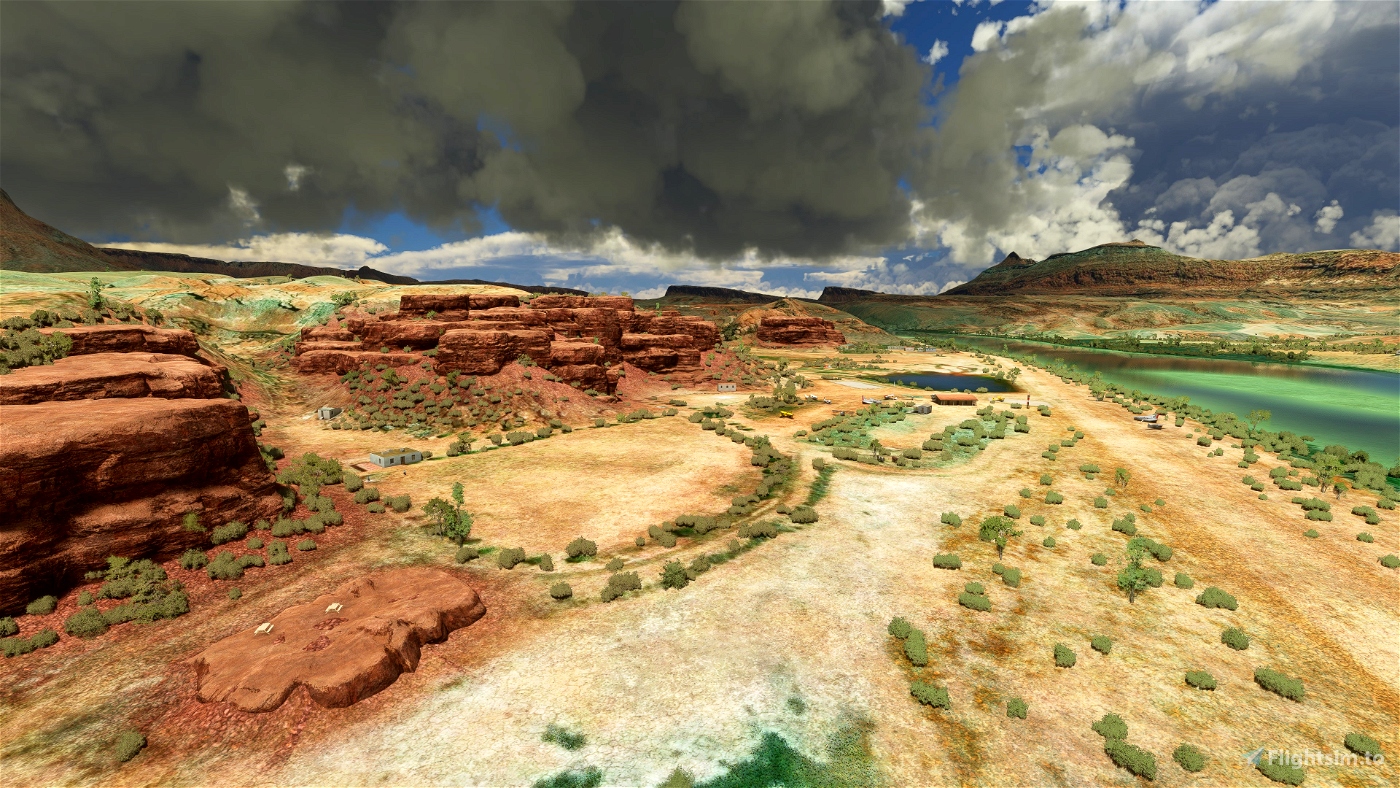 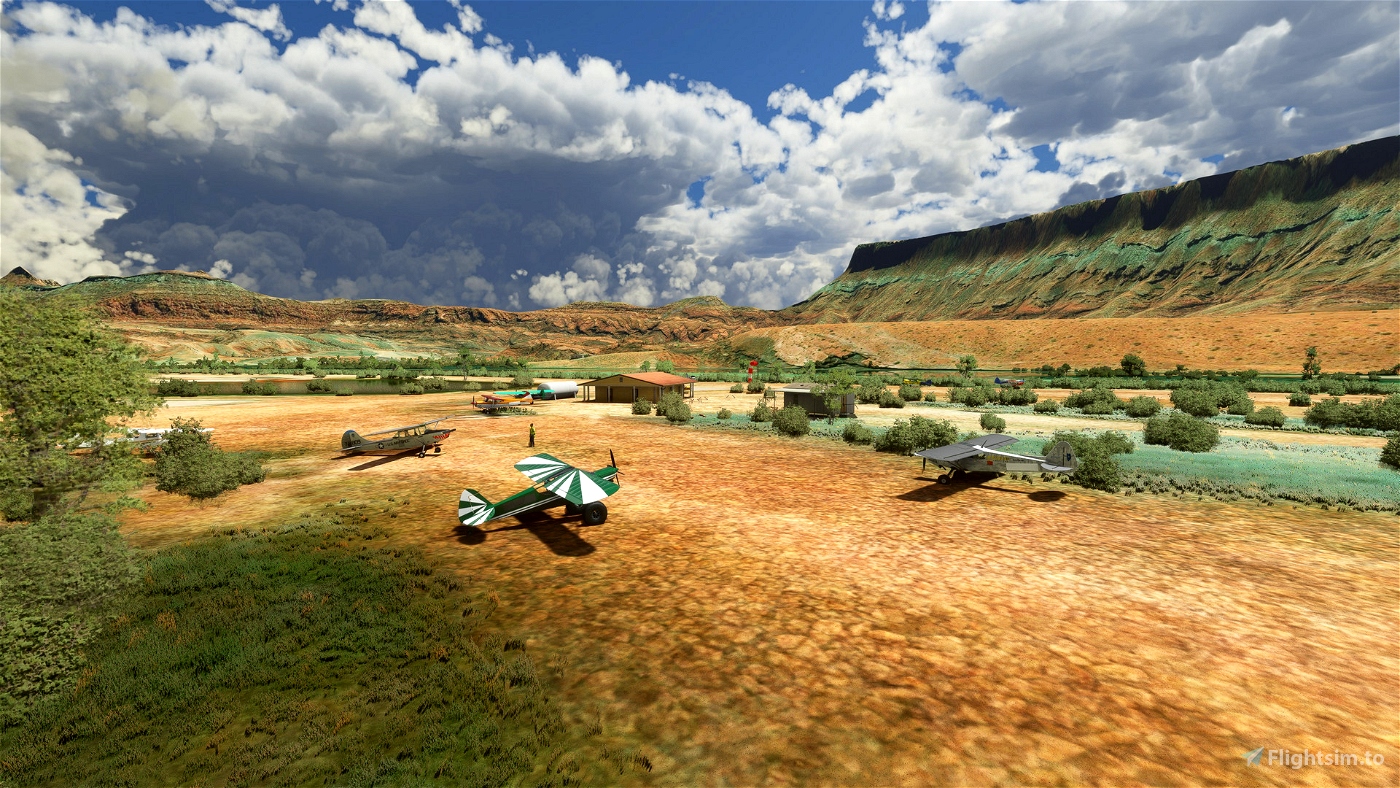 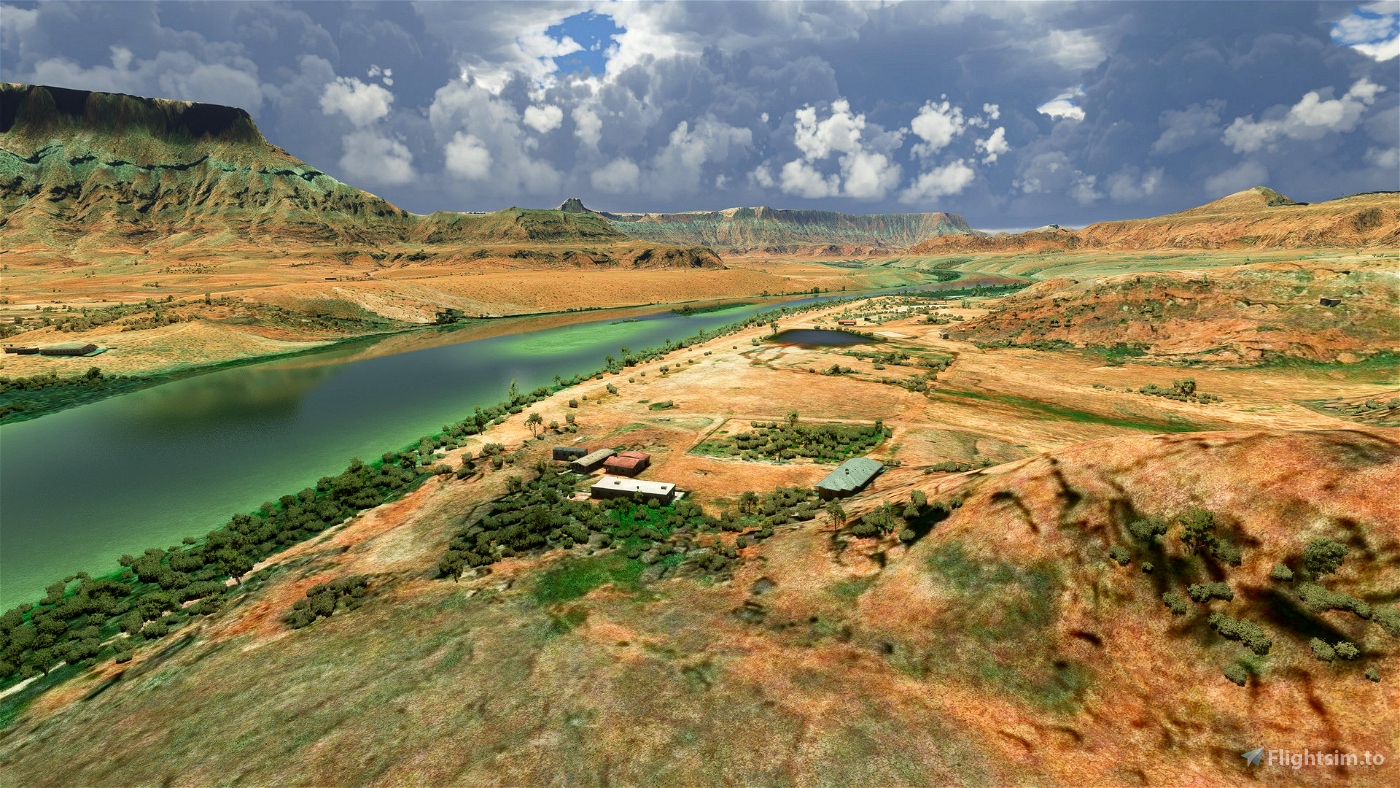 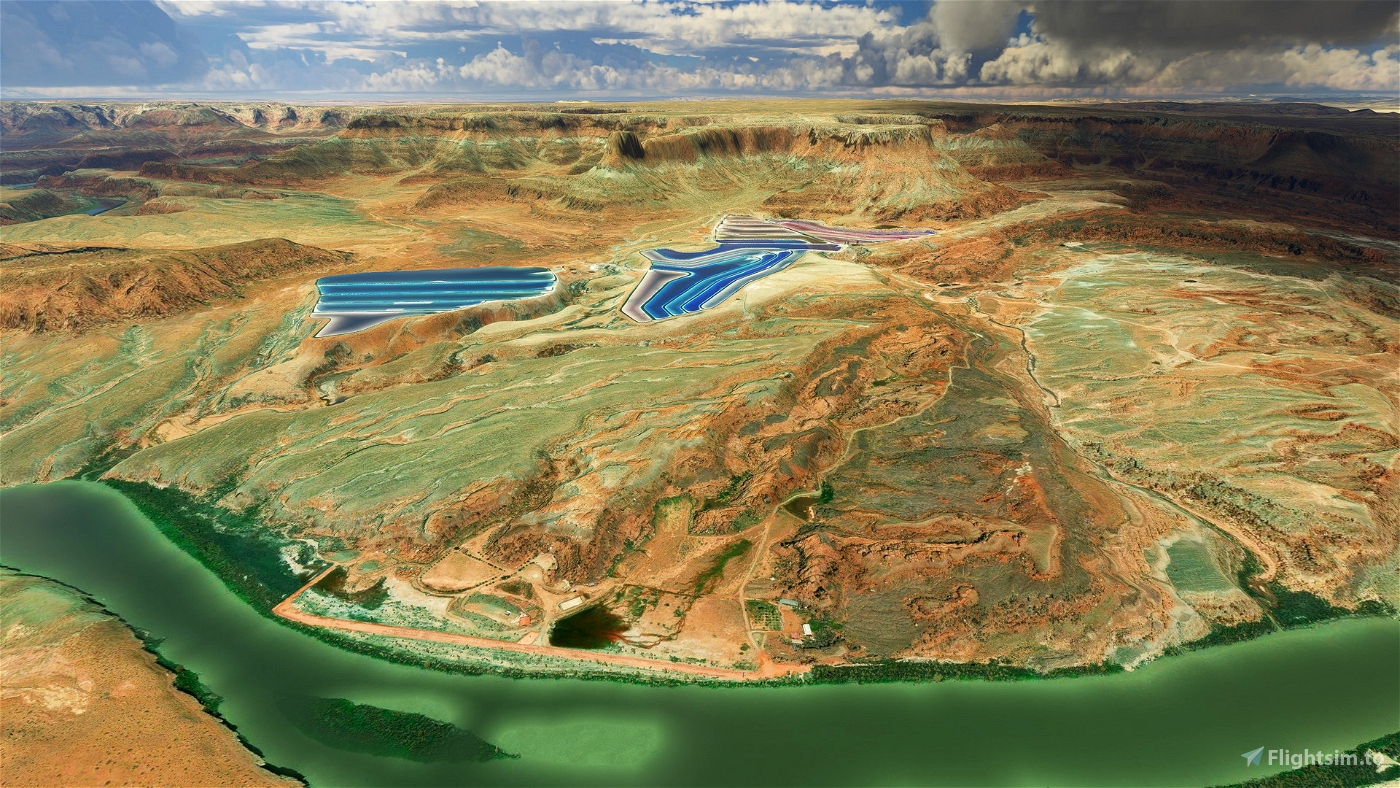 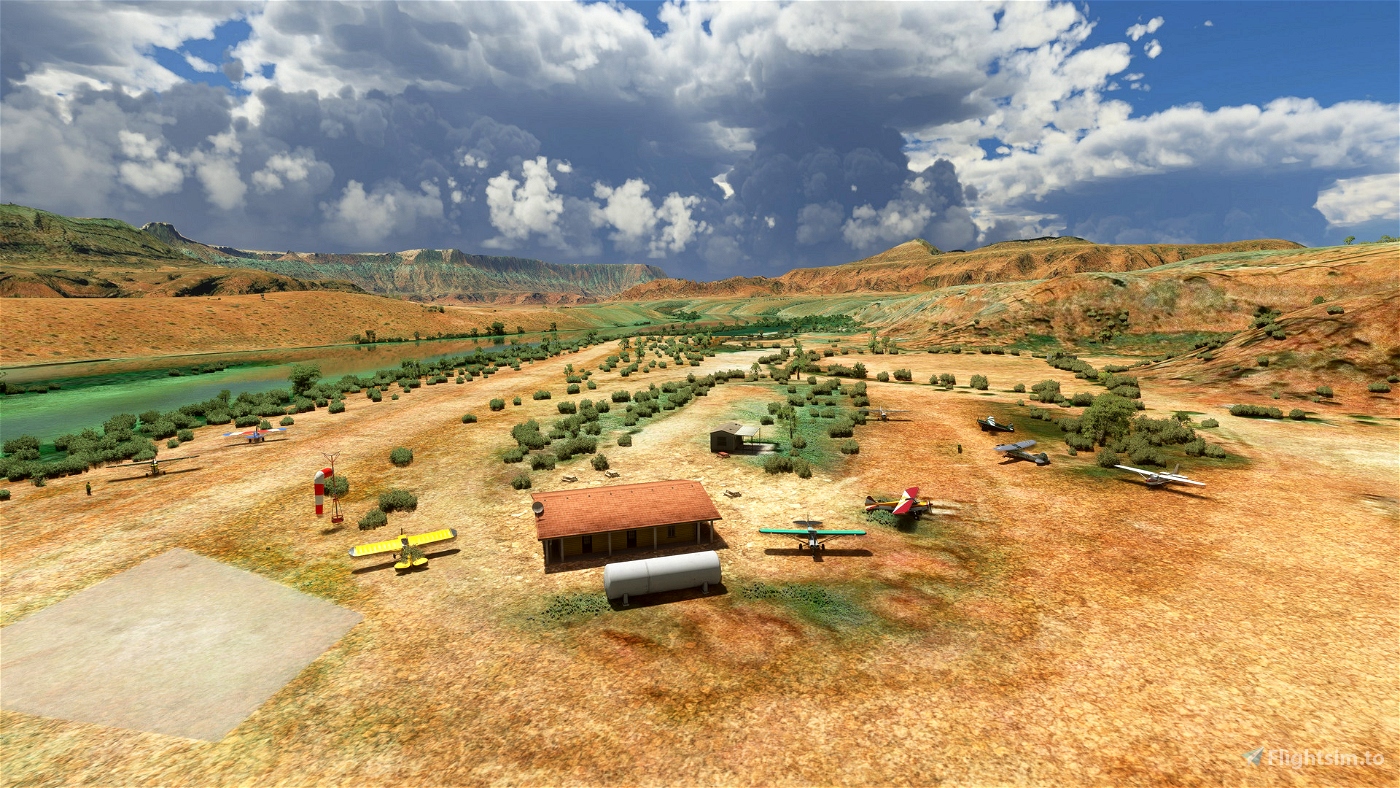 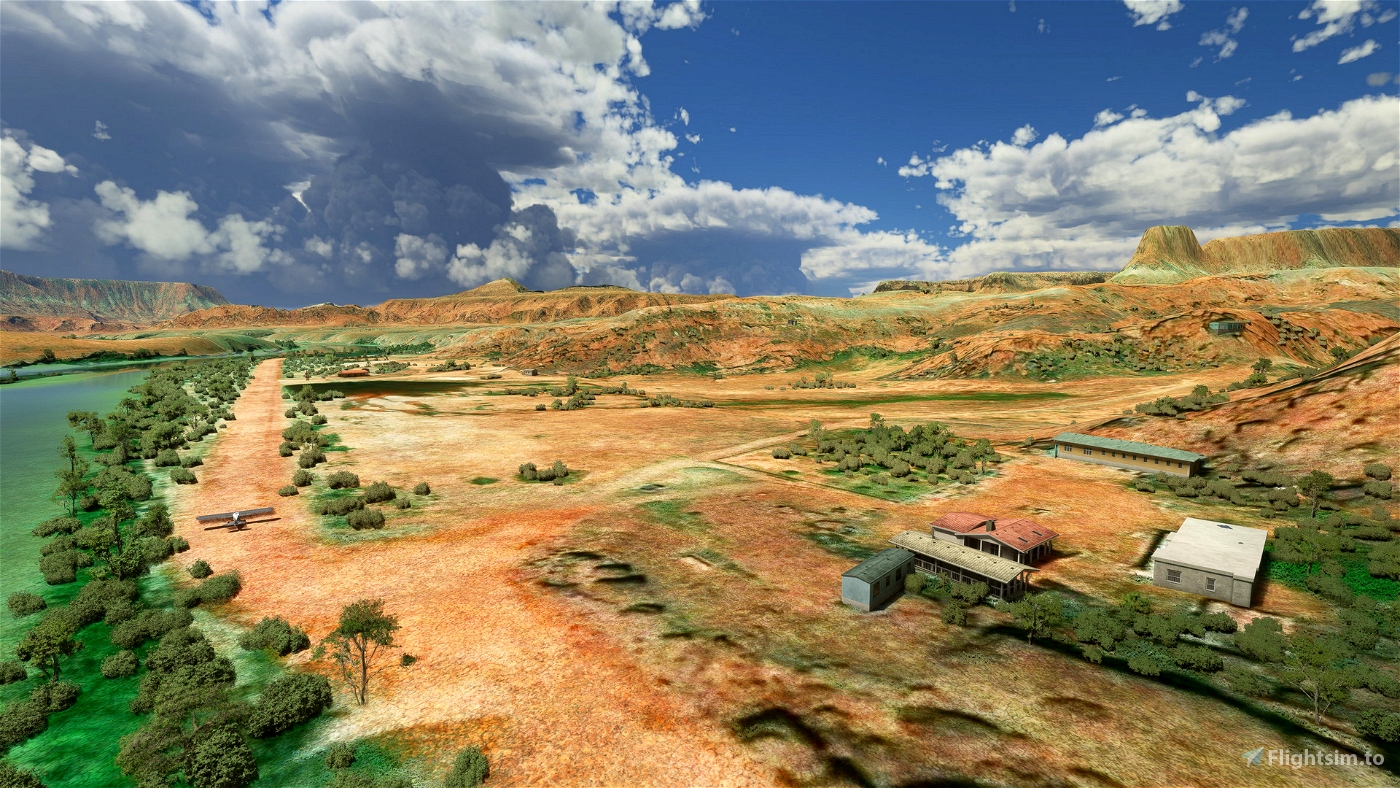 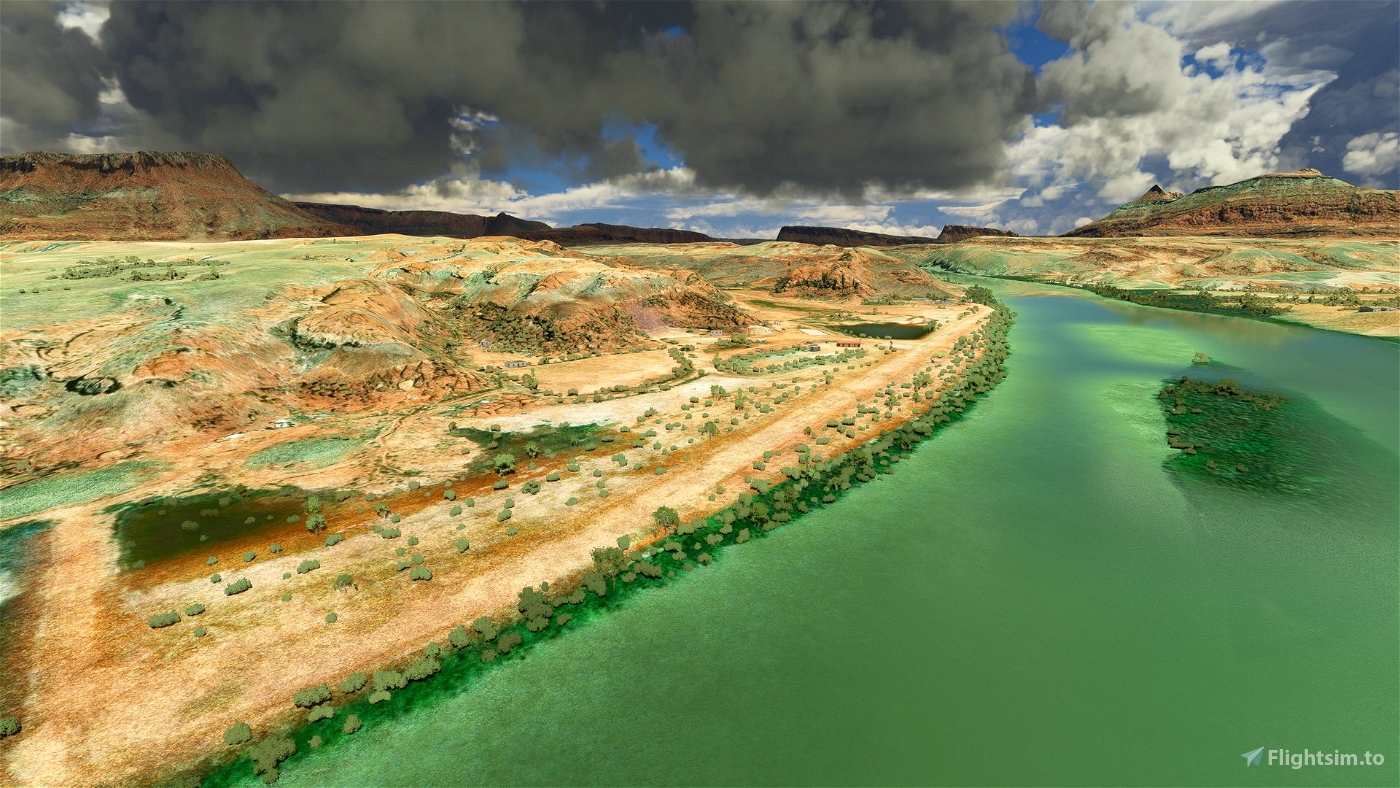 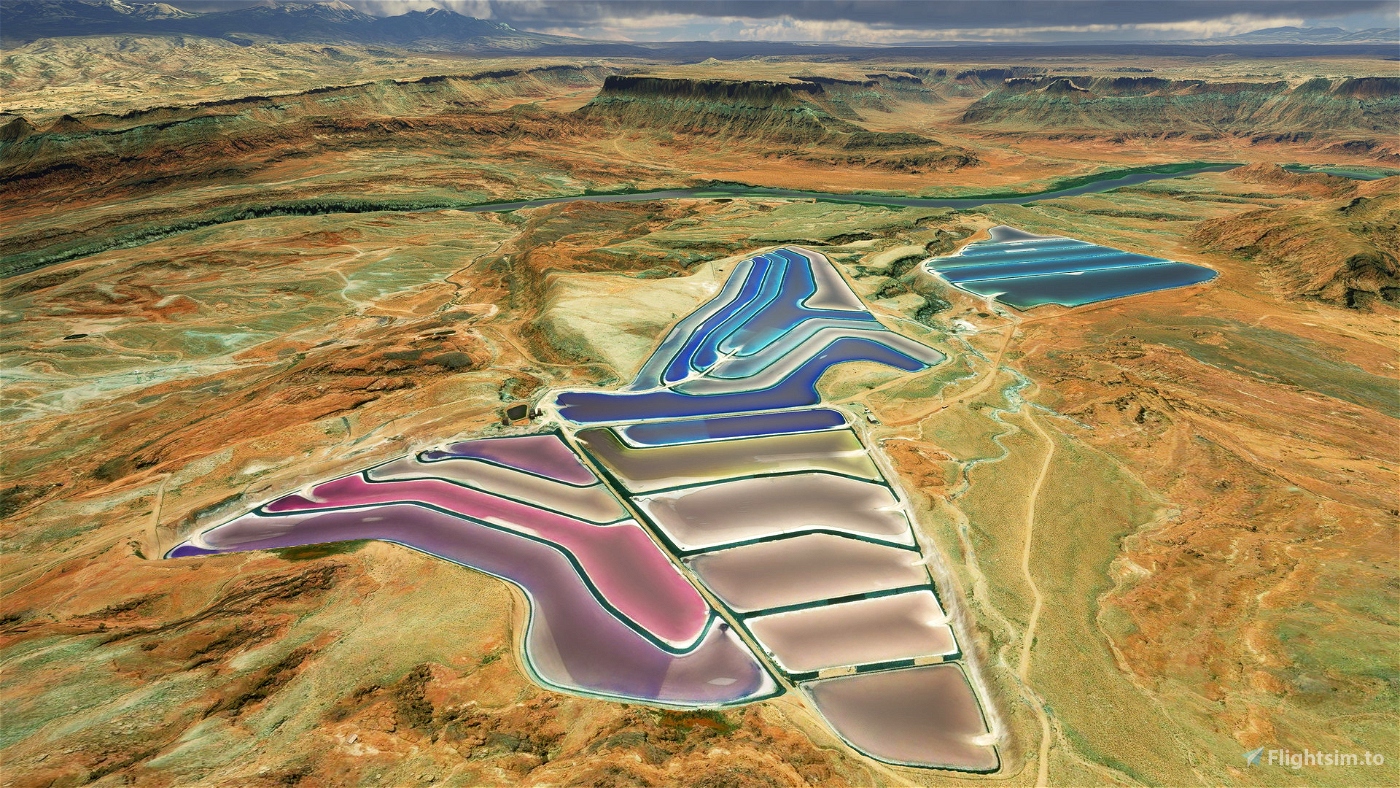 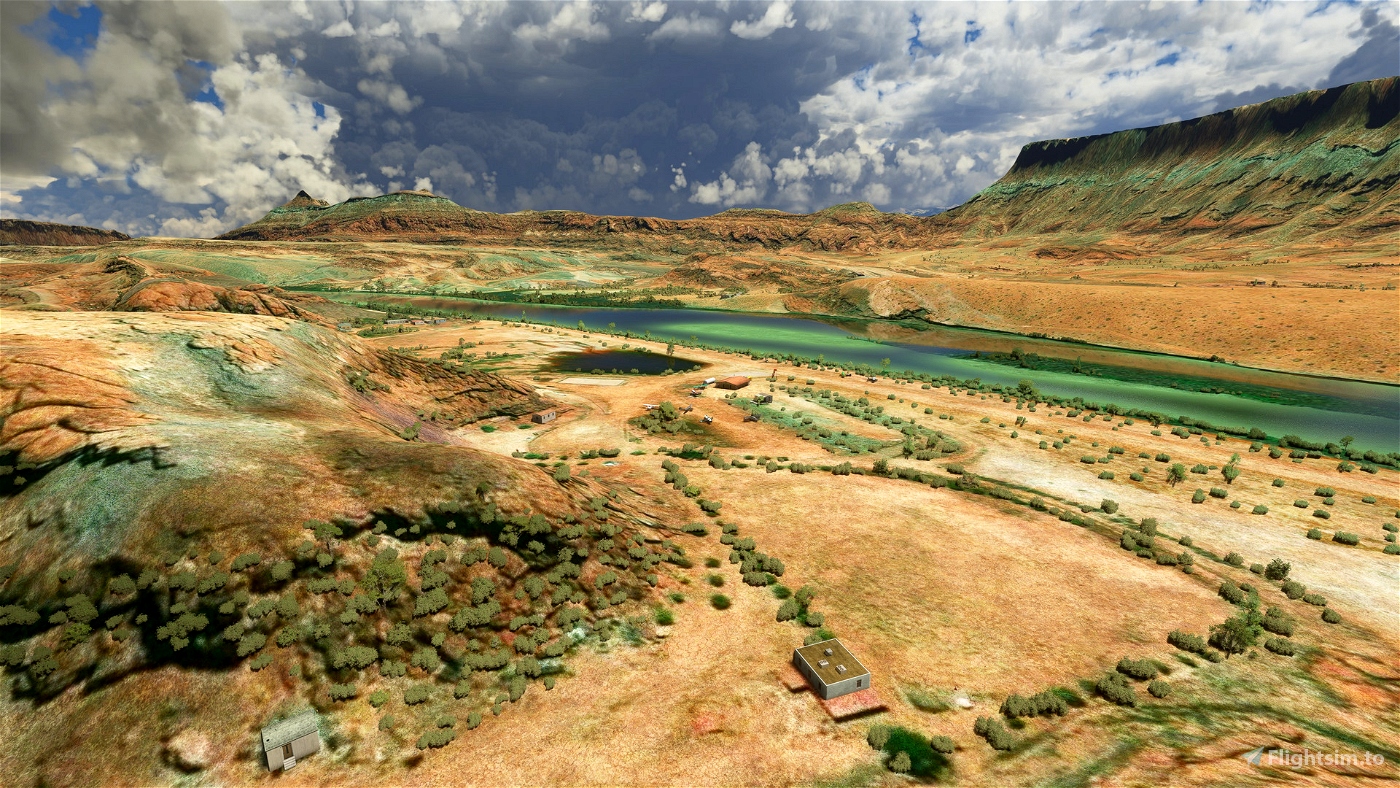 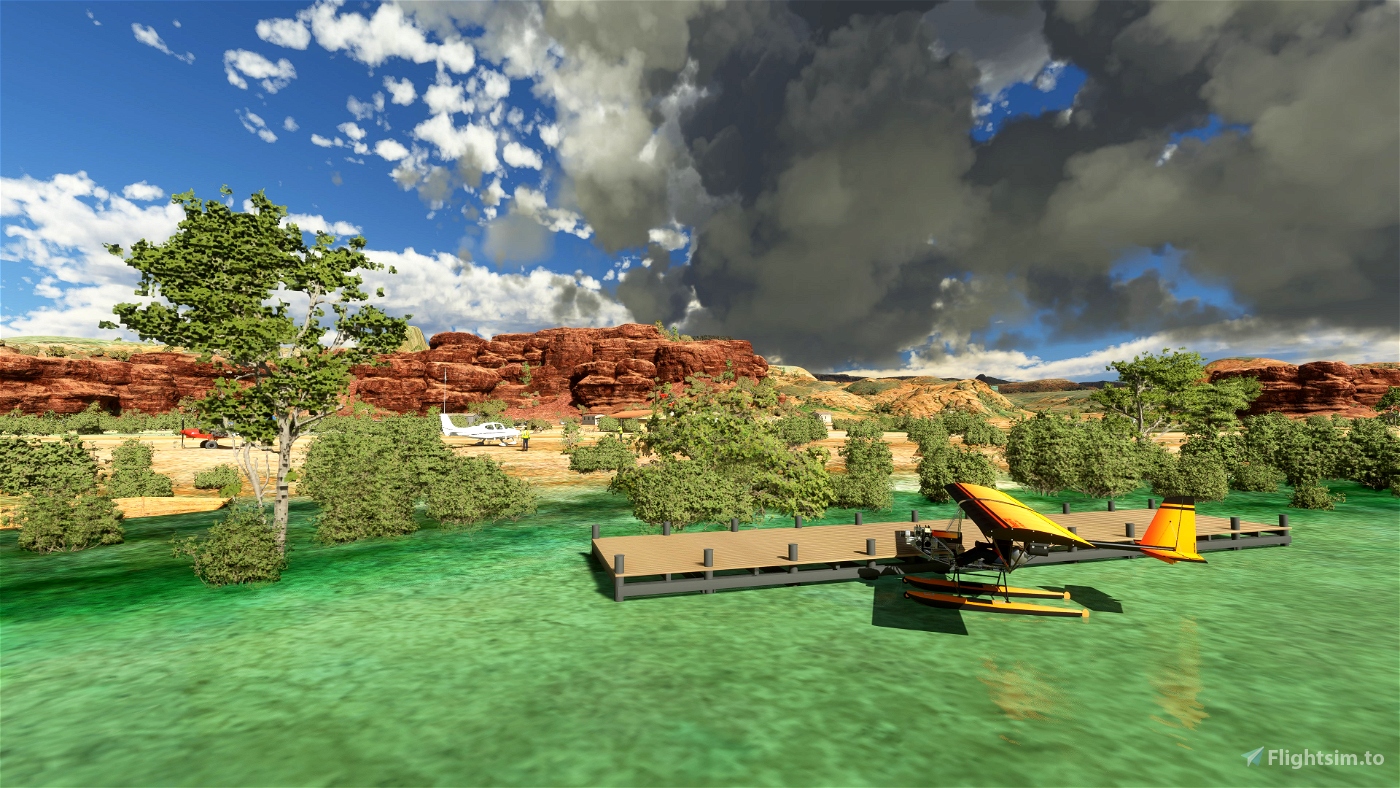 Once a year there's a back-country fly-in event at Caveman Ranch which is also known as Tangri-La (UT68), with people coming from all over Utah.

Located close to Moab the 3000' dirt strip can handle most GA planes and on arrival you can take advantage of the tennis court or the baseball diamond which the owner has built !

The lodges have been cut into the sandstone but they are very rarely used. The Caveman Ranch has a fascinating history which I urge you to google.

The airstrip has been ignored by Microsoft but it is too nice to be ignored so I've added the airstrip to the growing collection of Utah airstrips.

The airstrip 'pbk-caveman-ranch-ut68' which is required and a folder called 'pbk-cliffs' this folder contains all of the sandstone cliff models and is optional, the airstrip will work correctly without it BUT you will be seeing the low quality generic MS hills. If your pc can handle the cliff models then I would recommend you put both folders into your community folder.

v1.1 update after correcting an error that was reported, thank you.

v1.2 MAJOR update to include some decent sandstone cliffs (which you can land on lol), people on the ground and 101 other minor terraforming tweaks. A pontoon dock has also been added on the river

v1.3 minor correction to the river water level to stop the float planes being beached coming into the pontoon dock

v1.4 more cliffs added around the area and other minor tweaks

Show your gratitude by making a donation. This mod was brought to you by Photosbykev. You may donate if you like.

You don't have to pay, but we do.
Our website is made possible by displaying online advertisements to our visitors. Fair users download up to 10x faster and have to wait 5x less long than adblock users. Please consider supporting us by disabling your ad blocker.
This file has been scanned for viruses and is safe to download.

These users have donated to Photosbykev to keep him making awesome add-ons everyone can enjoy.

Thanks for the heads up, I will try that scenery again, would you be interested in working on a scenery like this,,ORSOS Islands Your Own Private Floating Island - Boats For Sale in Florida - YouTube?

Your scenery is the best and most creative, I 've ever seen, to date. Really enjoyed Mineral Canyon Airstrip, but Hurricane Mesa & Caveman Ranch, was screwed up so bad, on both sceneries, my throttle kept sticking to high, and would not go down, I thought it was my system so I reinstalled MSFS 2020 and still happened, but not any other scenery, such a shame, on those 2 sceneries

There was a problem with those scenery packs but I fixed the conflict. Since correcting it I haven't heard of anyone reporting a problem even during group flights.

8 month(s) ago
So beautiful ! Great job and thanks for sharing!
0
0
Reply

9 month(s) ago
Another pro project! And this time you got my favorite strip!!
0
0
Reply

9 month(s) ago
This keeps getting better and better, awesome work
0
0
Reply

Thank you 😊 it's a nice place to visit lol

It sure is, but then again all your scenery is nice to visit lol.

The bush making out with the plane is my error, sadly I can't do anything about the floating bushes that is down to Asobo 😞 I'll update the scenery and report tomorrow. Thank you for reporting the mistake.

Thanks, cant the bushes be lowered though ?? If not then I sure hope Asobo fixes things like this.

I think Asobo forgot to lower them when they removed their main trunks to make them into bushes. The vegetation is defined by a setting of the polygon that encloses them, the only options available are what type of vegetation, the scale (size of each object) and density (how many objects). Kev

Ahh i see, well lets hope they get to fixing their messes lol